My herbs are hangin' in there. I haven't killed them yet. On the contrary: 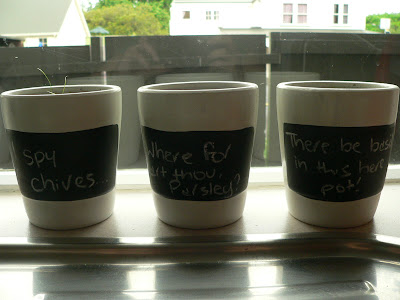 Doesn't look like much, right? But wait, there's more: 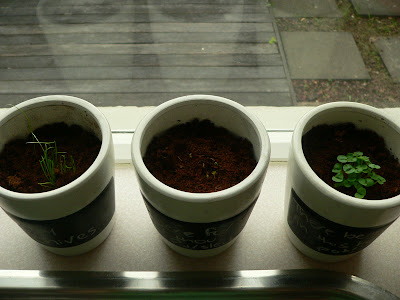 Even the parsley's joined the party. It's grown a little more since I took this picture a couple of days ago. Lookin' good!!! Although, I have no idea how much longer they'll last. I'm doing my best to keep them alive and growing. If they last six months, I may even name them. But not yet. I have to prove to myself I can keep a plant alive for longer than two months first. Y'know, it's funny... I can keep animals alive, my children appear to be thriving, and yet, plants... they are a mystery to me...

Something else that appears to be thriving is my knitting. I finished the cutest little cricket vest for a wee babe the other day: 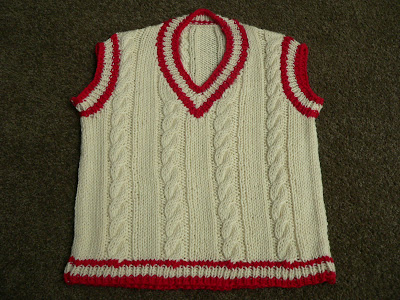 How sweet is this?!? It's a Sirdar pattern, in Sirdar yarn (Snuggly Baby Bamboo DK). The pattern itself was fine, as was the yarn, except for the fact that I got three knots in just two balls of the white - I haven't used all of the other ball of white or the red, but I wouldn't be surprised if they had knots hidden somewhere in there as well. Talking to a knitterly friend today, she says she had the same problem. Colour me disappointed!! I think I will write to the company. I expected better from a well-known, international brand. Their quality control sucks.

On Thursday, I cast on a sweater. Although it is summer here, the weather has been rather attrocious of late - rain, rain, and more rain. Not very inspiring for summer activities like backyard cricket and walks on the beach. Very inspiring for winterly knits though. So as soon as the wee vest was blocking, into the yarn stash I went, and settled rather quickly on the Derry Raglan and Cowl I've been eyeing up since last year, thanks to KiwiPurler over at Kiwiyarns Knits (this post specifically. And yes, I'm eyeing up the skirt too).

I've had the yarn for a little while now, although that was a mission in itself. You see, when I saw the picture of the sweater and cowl on the blog, I hunted down the book in the library. On closer inspection, I decided that I liked the yarn so much I wanted it exactly the same. So to the internet I went. A search on Ravelry (ah, blessed Ravelry, how I love thee) informed me that it was only possible to purchase in America (of course). After a few days of hunting, I finally found a store in Colorado that had enough in stock and were willing to sell and ship internationally. The transaction took place, and the yarn was sent. I waited, and waited, and it didn't arrive. There was plenty of email correspondence back and forth, until eventually it turned up back on their doorstep. It had been labelled 'unclaimed'. I was furious! Not with them of course, but with the people trusted to deliver my package to me, safe and sound. Had I known the parcel had arrived in the country, I would've been happy to pick it up, but nobody had bothered to notify me, and it was sent back. I gave myself a few days to calm down, then went and spoke to the people at the post depot, explaining what had happened, and asked very nicely for them to please make sure that it didn't happen again.

The nice ladies at the yarn store resent the package, and thankfully it arrived via courier a few weeks later. Then it sat in my stash until earlier this week. I have to say though, its lovely yarn, very soft, and not a single knot so far! Its Karabella Soft Tweed, in colour 1310 (I have it memorised - must've been all the hunting I did for it last year...) and I guess I could say it was worth the extra effort to get it. I haven't yet come across a New Zealand tweed yarn that is as soft. I'm not saying there isn't one out there, I'm just saying I haven't found it yet.

Anyway, I'm enjoying working with it so much, I've already completed the body of the sweater, and only have the sleeves to go. And the cowl of course. I should be able to wear it by the end of next week. Wonder if it'll be cold enough?
Posted by kreachr at 19:14