I've been thinking, and have come to the conclusion that I would be fully okay if you decided to arrive a little earlier because I have made a couple of lovely sweaters already this year, and I would like to wear them. Soon.

Yes, I know its only January, and you're not supposed to be here for another few months at least, but they're really nice sweaters. And just quietly, between you and me, Summer kinda dropped the ball a bit this time around.

I finished my Mandel sweater the other day: 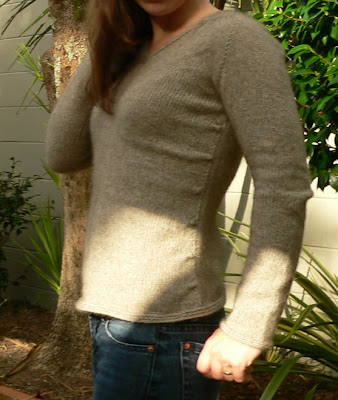 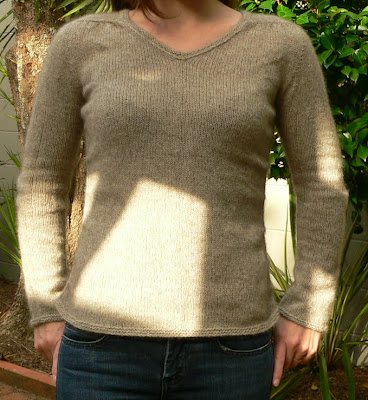 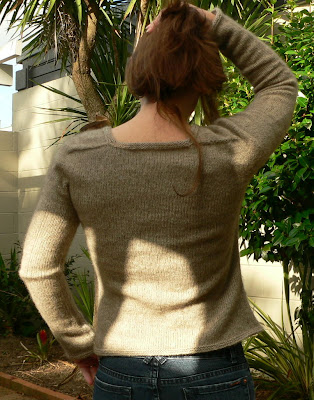 Knit in Touch Yarns Merino Possum, I only used two skeins (less in fact, there's still a small ball left of the second skein) - so that would be less than 840 metres total. Not bad. Probably could've knit it a teensy bit longer, but I like it how it is. If, for whatever reason, I decide it does need to be longer, I can rip back the four garter stitch edging rows and knit some more onto the bottom, such is the beauty of a top-down knit-in-one-piece sweater. Hurrah. The yarn is very soft and drapey, and can be worn next to the skin without any problem (except for the occasional tickle from the possum fur). The pattern was very well written and easy to follow. I need to practice my picking-up-stitches-around-the-edge thing though. If you ever get a chance to look closely at the shoulder saddles, the stitches picked up around the edges look a little untidy and I'm not completely happy with them. Still, nobody really looks that close, do they?

I wore the sweater out the other day when it was a little cooler, and it was nice and snuggly. I was lazy and didn't block it, so the bottom edge kept rolling up, but other than that, all good. Wow, two sweaters in one month! I may just get through my queue this year...

So you may remember I mentioned my sister and her family were coming to stay last week. They arrived Wednesday afternoon, we went shopping on Thursday (at the biggest mall in Auckland of course - such a novelty for the kids), and on Friday we went to Butterfly Creek. Wow. The butterfly house was quite something! I tried to get some good photos, but its kinda hard to take pictures of butterflies that keep moving, with an iPhone that doesn't have zoom (it probably does, but I haven't figured out how to use it yet). 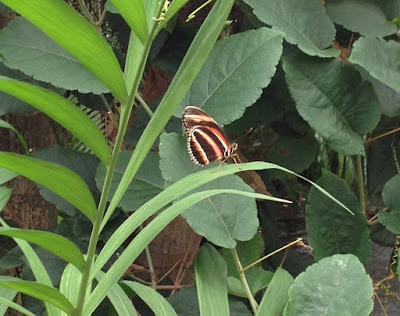 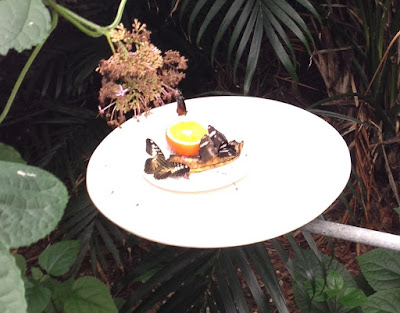 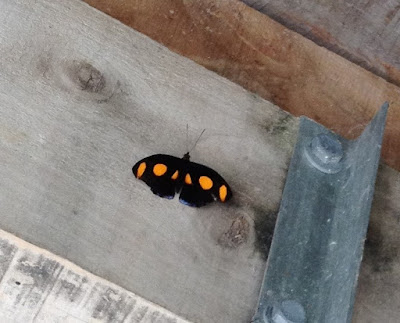 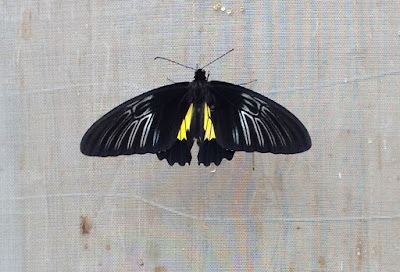 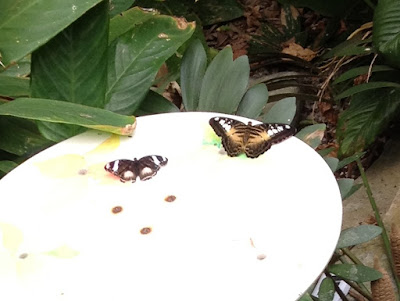 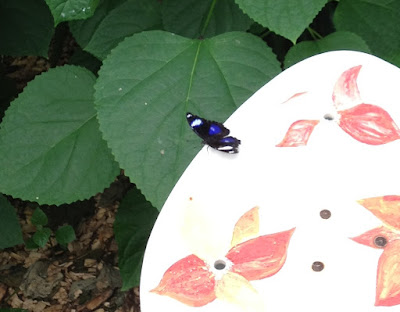 This is only a tiny selection of all the beautiful butterflies they had in the butterfly house. There were bright greens, reds, blues, yellows, stripes, spots... all sorts of butterflies. Absolutely gorgeous. I was wearing a bright coloured top that the butterflies seemed to like, and my sister had a hard time trying to carefully dislodge (without touching) two butterflies that had decided to take up residence on my top and my hair. The kids thought it was hilarious.

It was a wonderful outing, with crocodiles to visit, a large number of tarantulas, and rabbits, goats, guinea pigs, alpacas, sheep, ducks and chickens too. Unfortunately it started to rain while we were there so the kids didn't spend too much time outside with the larger animals, but they had fun all the same.

They headed back home on Saturday, with a container of 'the biscuits'. Yes, they actually got eaten. Okay, so I got rid of the most mangled looking ones, but they ate a fair number while they were here, and took the rest for the trip home. See? I told you they tasted fine :-)

Speaking of food, I had a busy afternoon preparing meals to put in the freezer yesterday afternoon. Spinach and ricotta lasagne, chicken souvlaki, crumbed schnitzel, and a batch of blueberry muffins. Today I plan on making some more. Hopefully, with ready-prepared meals in the freezer, we'll be less tempted to get take-aways next time we're feeling lazy and don't want to cook, or have a limited time to organise dinner.

I also received a parcel by courier yesterday, from a fellow knitter that needed a bit of help. 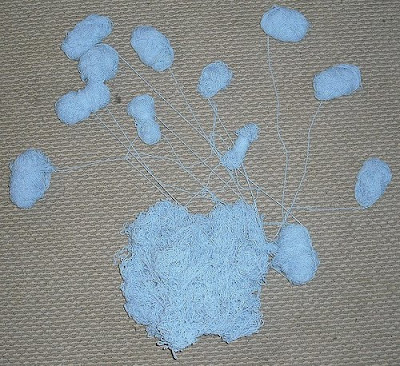 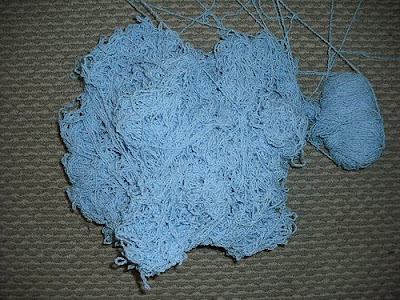 You see the problem here? You can't knit with this!! So I volunteered my detangling services. As soon as the parcel arrived, I got to work. I'm about halfway through now, and should have it done by this afternoon. Then it will be sent on its merry way back to the owner, who will be able to make something beautiful out of it.

I have to say, it's quite fun detangling such a mess. It requires patience and perseverance, but it's like a big giant puzzle, and I thoroughly enjoy creating order out of chaos.

My current knitting project - a pair of socks - has been set aside until I have completed the puzzle, but they should be finished by the end of this week as well: 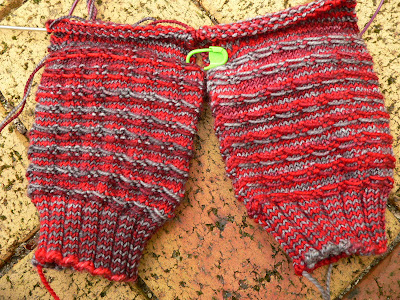 Shelves upon shelves (I've shortened it to Shush) by Erica Lueder, knit with Knitsch merino sock yarn in Zidler. I'm knitting a tighter gauge than the pattern suggests, using 2.25mm needles and 70 stitches around, instead of the recommended 2.75mm needles with 60 stitches. (I've had a few pairs of socks wear through quite quickly in this yarn knit in a looser gauge, so I'm trying to avoid that this time around)

I love the colour. They'll be short-ish socks, and hopefully I'll have enough yarn left to make a pair of socks for one of the boys. If not, I'm sure I can find a baby to gift a pair of socks to ;-)

Anyway, must go, I have a seven-year-old buzzing around waiting not-so-patiently for the computer (deep breaths, only six more sleeps before school starts back) and I have a blue yarn blob awaiting my attention. Enjoy the rest of your week!!
Posted by kreachr at 13:04