I was walking home from town this afternoon, when this most unusual bug scuttled across the footpath in front of me. I'd never seen it before, and the thing was bloody quick, so I couldn't grab my phone out quickly enough to snap a pic before it stopped on the side of a rock. I got the best picture I could, and decided to look it up on the net: 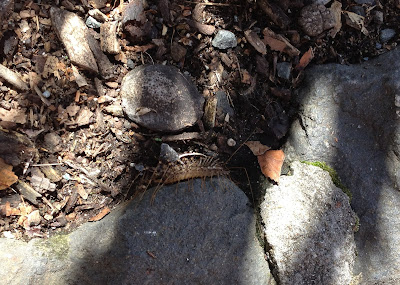 It is a house centipede. Has anybody else ever seen one? It makes you think, doesn't it? The sheer number of different creatures on this planet is just astounding. One could never see them all in a lifetime. The universe is truly an amazing place.

Now for a complete change of subject, I finished spinning a skein of yarn today: 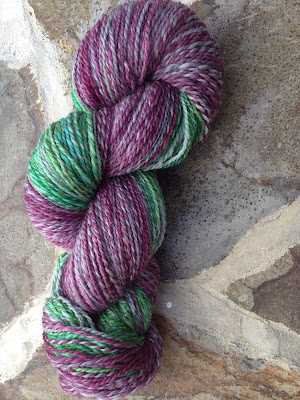 Royal Orleans, on 100% polwarth from maude & me. I divided the braid into two, then I split (as best I could, which was a pretty poor attempt to be honest) the green and the purple, so they'd be separate, and wouldn't muddy together too much. 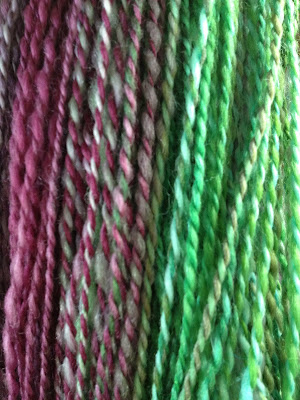 I was pleasantly surprised to discover, after plying the two singles together, that I had actually managed to spin almost exactly the same length singles. There was less than half a metre of one single left. That is the best I've ever done to get two matching-length singles. I've often been frustrated by the large amount of one single left over after two-plying, when I've tried my absolute best to get them to match. This time? The singles were spun sporadically over months, with no real consistency at all. So yay! The resulting yarn is about a DK/worsted weight, about 316.5m, 123g. As usual, I have no idea what I'll make with it. Winter's coming, anybody want some mittens?
Posted by kreachr at 19:36