The Madness has returned

Yes, Sock Madness 6 has begun! The first pattern was released to us crazy sock knitters on Saturday, and it's an easy, but rather fun pattern. Involving dice. Intrigued? I was. The sock is knit from the toe up, and the main part of the sock is split up into cable columns. Every fourth row is a 'cable' row, but in order to find out if you need to cable or not, you have to roll the dice. I've got an app on my phone which rolls six dice at once (very handy, as there are six cables across the top of the sock) - if you roll an even number, you cable. If you roll an odd number, you don't. I've knit just past the heel of one sock (I would've done two at a time, but I accidentally buried the centre strand in the yarn cake while winding, and decided against hunting it out): 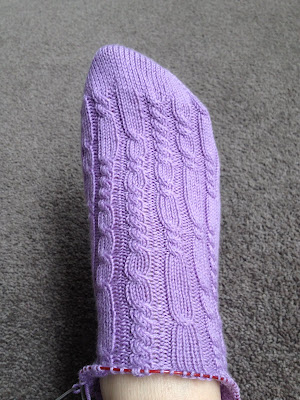 Cool, huh? I love the complete randomness of it. Keeps you interested :-) I'm knitting these in some yarn I was given in trade - it's Cascade Heritage - 85% wool, 15% mulberry silk. Very soft and snuggly!!

I finished the pair of socks I was knitting last week: 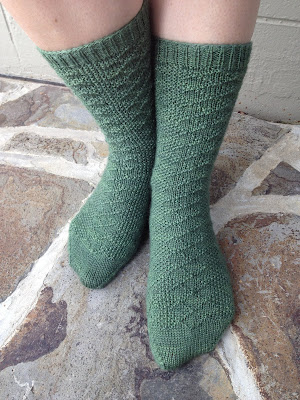 Catherine, knit with Sweet Georgia Yarns Tough Love Sock in Botanical. These ended up going to my sister for her birthday, along with this hat I knit her over the weekend: (This photo makes me think of grumpy dwarf...)

This is a sock yarn version of the Felicity hat, knit with Knitsch Merino Sock yarn in Mystery Machine. Such an awesome colour! As usual, I had a bit of trouble getting a decent photo of the hat on myself, but I thought this one was kinda cool: 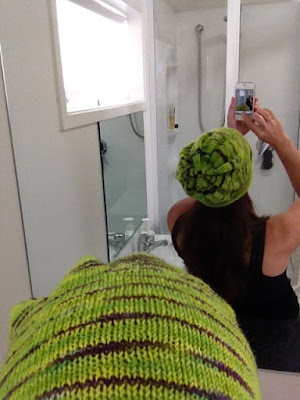 So basically I got my knitting mojo back, and managed to get quite a bit done over the last few days, although I didn't have any time to pick up the knitting yesterday. Instead I got to enjoy a dinner out with a friend from Wellington. It was nice to catch up and share news.

Life at casa de kreachr is back to normal - I'm managing about three runs a week, and am back up to 10km (yay!), Deane's busy with work and T is 'accidentally' leaving his workbook at school in order to avoid homework. Cheeky bugger. X asked me yesterday what 'managing your impulsivity' meant, so I explained as best I could, and wondered where that question came from (he comes up with some real doozies sometimes). I discovered this morning, while packing his lunch, that he had filled out a 'job application' for the AV team at school. Awwww, how cute! His first job application! I wonder if he'll have to go through a series of rigorous interviews? Does this mean that he will become even more nerdy than he is now? Is that even possible?? I suppose worse things could happen...