Simple, yes? Apparently not. I have two very good examples of my complete failure to do this. The first is the round two socks for Sock Madness. I knit three full pattern repeats before somebody kindly alerted me to the fact that the moss stitch I was doing down the sides of the sock were the wrong moss stitch. You see, moss stitch and seed stitch, to some people (like myself) is the same thing. To others, seed stitch is k1, p1 on one row, then p1, k1 on the next row. Or that could be moss stitch. The other seed stitch is k1, p1 for two rows, then p1, k1 for the next two rows. Of course, depending on who you are, that could be moss stitch. You see how this could be confusing?

To clarify exactly what moss stitch we were supposed to be using for the socks in Sock Madness, the designer kindly wrote exact instructions on the first page of the pattern. Did I read this? No. Nor, it appears, did a number of other people competing in SM - there was much frogging, and tinking back, and dropping and reknitting of stitches to be done.

This wasn't the end of the matter for me. You see, this (rather ingenius and utterly fantastic) pattern had us knit one sock (named Frick) from the toe up, and the other sock (named Frack) from the cuff down. The end result is the same - both have afterthought heels. I knit Frack first, as I was starting my sock at knitting group and figured 19 rows of k1, p1 rib would be mindless enough that I could do it without thinking. After the aforementioned hiccup with the moss stitch, the knitting of the sock was quite straightforward and went without a hitch. I even managed to learn a new technique - the afterthought heel - thanks to this rather useful and very informative youtube video by The KnitGirllls.

I was confident enough to think that I could pretty much knit Frick without having to refer to the pattern overmuch. So I cast on the toe and knit happily away. It wasn't until I'd got to the last row in the first repeat that I realised that, of course, the pattern is reverse, and it should be p1, k1 rib, not k1, p1 as it was for Frack. So I had to frog again :-( There were no further problems, and I am very, very pleased with the resulting pair of Frick n Frack socks: 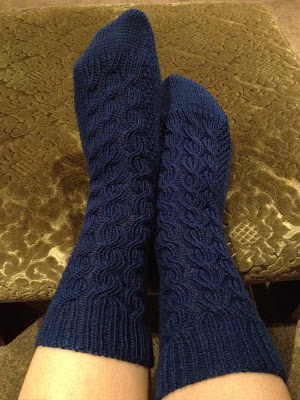 (The picture isn't the flashest, nor does it show the colour as accurately as it could since it was taken at night, but I don't really care. They still look awesome.)

If you pay attention (or rather, if you're not in a rush to get the socks knit because you're competing against fast people) the pattern is very easy to follow, and the resulting socks are really quite fantastic. Last year, if I was presented with this pattern, I would've been horrified. Thankfully though, I have been practicing my continental knitting with norwegian purl quite a bit and no longer detest 1x1 ribbing (which this sock is in its entirety (except the toes and heels of course)). I think I love them more because they are knit with the most awesomest of sock yarns - Wollmeise!!! I was given two skeins by a friend (who is conveniently located in Germany) last year. I wanted to save them for something extra special, but was dying to knit with them, and finally caved. This colour is blaue Tinte on Sockenwolle 80/20 twin, and I love it. The cool thing is, since the skeins are 150g/311m, there's actually enough left to make a pair of socks for one of the boys. Fabulous! The yarn is very soft and lovely to knit with - it can be a bit splitty, but I didn't find it to be too much of a problem. Let's face it, most yarn is splitty to a degree.

So anyway, failure to read the pattern correctly wasn't really a big deal for the socks, as it was easily fixed, and I have made it through to the next round with plenty of time to spare. The real problem is the Gemini tee I've been knitting.

I measured my bust, found the corresponding size, and got to knitting. I got the gauge recommended in the pattern, and I was away. It was nice simple knitting that I could do while reading study materials (of which there is a lot) and watching TV. I just this afternoon cast off the bottom ribbing, and have only the sleeves to knit. The problem? It's too big. And I checked the gauge several times to be sure I was getting it right. Wanna know why it's too big? Because I completely missed the bit in the pattern notes that says "To achieve the same fit as the sample modeled in the photographs choose a size with a finished measurement that is approximately 4 inches smaller than your actual bust size". Where is this pattern note located? Directly under the gauge. Idiot...

I'm going to finish it as it is - the yarn was cheap, and I don't care about it enough to rip it all and reknit it to the correct size. So, anybody got a 38-39" bust that wants a hand knit Gemini tee? Free to a good home! If there are no takers, I may one day rip and reknit, but don't hold your breath ;-)

Lesson learned: Read the pattern. The whole pattern. Properly.
Posted by kreachr at 18:10