Our flight over to LA was long and boring. I tried my best to get some sleep, but only managed about an hour. I just can't sleep on planes. I didn't watch a movie in the first nine hours because I was determined to try and sleep, but ended up watching the movie of the guy across the aisle from me, who had fallen asleep with his headphones on. Seems to be fairly common, as many people around me were doing the same thing. There was a girl ahead of the sleeping guy who started watching The Muppets Movie, fell asleep, woke up again, rewinded to where she'd got to before dozing off, watched again, fell asleep again, etc etc. The boys managed to get a few hours, T more than X, but they didn't find the skycouch terribly comfortable, as they had to share the space. They weren't very good at that... I ended up watching the latest Sherlock Holmes movie while eating breakfast in the last few hours of the flight.

I was pleased to find out that our wait at LA wasn't as long and arduous as I thought it would be. It would have been no wait at all if our flight wasn't delayed by over an hour. In fact, if it had been on time, we would've been boarding as soon as we'd arrived at our gate. Oh well... I was also disappointed to find out that the inflight movie was Sherlock Holmes. I could've watched a totally different movie on the first flight. Dammit!

We arrived at Dulles Airport in Washington DC just after 2am, and didn't have too much trouble getting the boys to bed. Deane had managed to get a good deal on a couple of hotel rooms with an adjoining door. Sadly, that good deal was because they were renovating. So we had construction noise to deal with while trying to get some sleep during the morning. It just so happened that the rooms they were working on were directly above us. Typical. Oh yeah, and the ice vending machine outside the door beeped continuously too. Fun times. But wait, there's more! Deane had arranged for a 2pm checkout, since we would be (very) short on sleep, but the front desk failed to notify the cleaning crew, who knocked on our door not once, but twice, trying to get in and clean. Arrrgggh!!!

We woke the kids up around 1pm, packed up and headed to a friend's place, where we stayed that evening. They kindly kicked their oldest daughter out of her room so Deane and I had a bed, and the boys slept in the basement. We had a cook out for dinner, and pumpkin pie and apple pie for dessert. How totally American ;-) Which I guess was the point...

And I saw a squirrel!!! Several actually, but I only got a photo of this one: 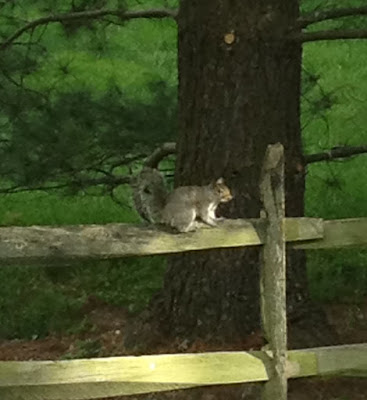 The next day, we headed into Washington DC to check out a few bits and pieces: 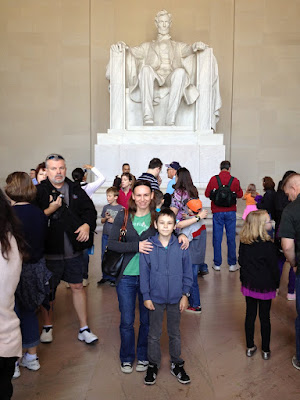 Here we are with Mr Abraham Lincoln, and a truck-load of tourists 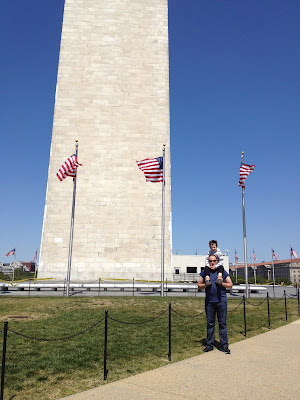 This is the Washington Monument. You can't really tell, it just looks like a bunch of stonework. But let me give you an idea of scale: 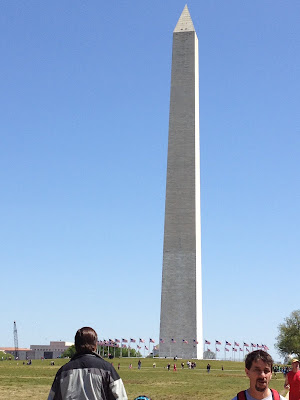 See how big it is? See how tiny those people look, that are standing in front of it? You can imagine it's a little difficult to get a picture of a person and the monument, unless you're standing reeeeeeeeally far away from it. Dude, that thing is huge. Much like my friend Abe. And, come to think of it, pretty much everything in this country. Like the first toilet I sat on and nearly fell into because it was three times larger than a normal toilet. I kid you not. It was made for giants. 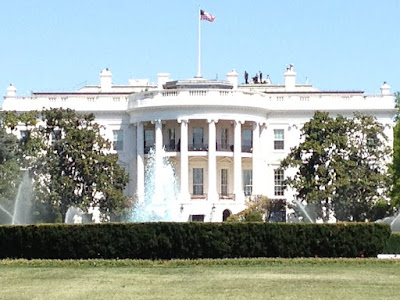 And of course, no trip to DC would be complete without of picture of the White House. No idea what those guys are doing on the roof. Security? I'm guessing it wasn't golf.

After our brief look around at these sights and a few others (sadly, the reflecting pool is empty as it's undergoing some maintenance. But what else is there to say about it, except that it's... you guessed it... huge) we headed on out and started our trip south to Florida.

We managed to get about halfway, sticking to the I95. We didn't want to take too long to get there, both to save on accommodation, and so we could get started with the theme parks. The next morning, we had a brief visit at the War Between the States Museum in Florence, SC, then stopped again at The Cracker Barrel (although I forget which town we were in for that). My friend had recommended we try the grits and biscuits, so that's what I had: 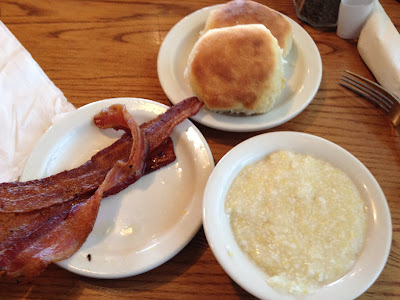 I also had some 'real' lemonade. (We'd already figured out that if you ask for lemonade here, you don't get Sprite. This stuff had pulp! It was delicious!!) I'd also been told to try the hush puppies. I didn't end up trying them, but X got some with his lunch. They looked interesting.

After we had full tummies, we were off again, (seeing this road sign on the way, and stopping to get some water. I think Deane just wanted to be able to say he'd been there ;-P) 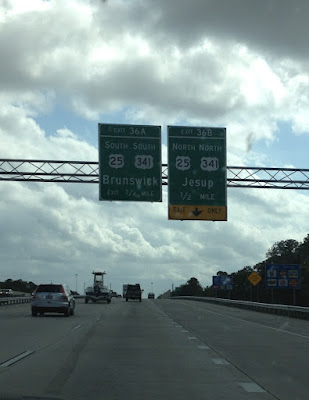 ...and arrived at our destination by the evening. It took a little while to get the kids settled - they're finding it a little difficult to adjust to the time difference - but it was nice to be out of the car.

Today was just a lot of fluffing around - getting settled into our accommodation (the place is ginormous!!! We went on a tour, and were driven around on a cart. It would take you hours to walk it all), shopping for some groceries so we could eat some proper food (The Waffle House totally doesn't count. Although I still want to go to IHOP) and trying to organise what theme parks to visit, when, and for how long. Tomorrow, we're into it!! The boys are gonna freak ;-)
Posted by kreachr at 13:37