That's right, only six more sleeps before the boys and I head off on our American adventure!! Deane's been over there since last Thursday, having a ball of a time. Drinking at a beach bar in LA, spending evenings at dance bars in Orlando, and today he was driving to Panama City. His time is limited though, because we'll be there soon to ruin all his fun ;-) Mwaaaaahahahahahahaaaaaa!!!

I've already scoped out a bunch of yarn stores that are less than an hour's drive from where we're staying, so on the days we're not being all touristy at Disney World, Universal or Legoland, I'm hoping to do a bit of a yarn-store hop. I have a list of half a dozen nearby, in Orlando, Longwood, Maitland, Winter Haven and Altamonte Springs. If I get any good pics (or yarn!!) I'll be sure to let you know ;-) Ooh, I just thought, wonder if there's some good stores on the road between Washington and Orlando...?

Anywho, the kids have finished school for the term as of about an hour ago, and tomorrow is Good Friday. My mother-in-law is heading up as I type this to stay over the Easter weekend (which will be good - an extra pair of hands to deal with the boys!). We'll be having a sort-of-family dinner on Saturday night - my favourite, roast lamb. Mmmmm... She heads home again on Monday, so I only have to worry about filling in Tuesday and Wednesday for the boys. It'll be interesting to see how they cope with a long-haul flight. I'm hoping they'll sleep for most of it :-) I might too, come to think of it.

Deane kindly advised that as he has hired a small rental car for our road trip, there is minimal luggage space. He asked me to pack a small suitcase.

A small suitcase. For three people. Ridiculous!!! I think I have managed it though, with only four changes of clothes each to get us through the first few days. From then on we'll have laundry facilities where we're staying, so no big. It certainly presented quite a challenge though! I haven't quite finished yet, there are still a few things to squish in (laptop, assorted chargers, last minute toiletries etc), but all I can say is, thank Bob we have three carry on bags! They'll be able to hold my knitting, kindle, and the boys' Nintendos (for the wait at LAX etc). Perhaps some pyjamas and a change of clothes might be a good idea for them too. I will say one thing - it helps to be organised! I'm not stressing about anything, because I know I've got it sorted. Yay.

I'll even be able to relax about Sock Madness - they've just released the optional round pattern this morning, and the optional round lasts 10-15 days. We should be well settled in our temporary residence by the time the round three specs/pattern are out. As long as I take a couple of yarn options, I should be sweet. It also means I'll have travel knitting! Because the socks are an optional knit, I'm in no hurry to start them, so I can work on my niece's Elizabeth cardigan for now (and possibly finish it before we go), then have the socks to work on while travelling. Awesome :-)

Here's a progress update for the cardi: 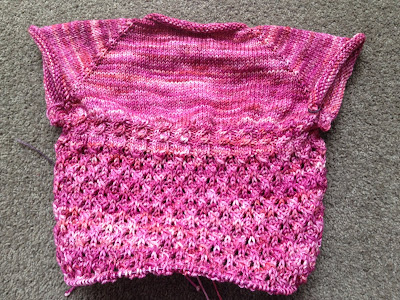 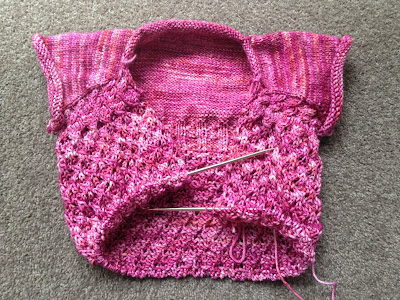 This is a lovely knit, and the pattern is easy to follow (all tiKKi's patterns are). It's also helped by the fact that this yarn is absolutely scrumptious!!! Malabrigo Arroyo in English Rose. So delightfully soft! I adore Malabrigo, it never fails to please :-) I'm actually quite a bit further along than these pics show - I've finished the lace and have started on the edging, which I should be able to finish tonight. That leaves the sleeves. Hurrah!

Now the only thing left to panic about is my study - I wanted to get the first half of my second assignment finished before we left, so I would have enough time to do the second half when we got back. I haven't finished it yet, and now there's going to be kids and extra people in the house until we go :-/ Hopefully I'll be able to sneak a few hours in here and there and get it done. That'd be a huge weight off my mind. Fingers crossed!!
Posted by kreachr at 15:40