Previous years' Mother's Day celebrations have been a little lackluster in the kreachr household - last year was forgotten entirely, much to my annoyance.  So I was a little dubious about this year.  I didn't want to poke and prod and have to remind the family, although I was very, very tempted to do so.  I had to bite my tongue several times.  I was even more worried that it would be overlooked again, when Deane wandered up to bed a little after 3am on Sunday morning.  Only four hours until my usual get-out-of-bed time.  I wanted pancakes!  How can I be sure he would wake up, get out of bed, and make the buttermilk pancakes I'd been fantasising about for days, when he clearly wouldn't have had enough sleep?
I stayed in bed, just relaxing, and thankfully was given a small blessing in the form of T, who wandered into the bedroom at around 8am for a cuddle.

Me: "Do you want some breakfast?"
T:  nods (a boy of few words, is my little guy)
Me: "Shall we get dad to make pancakes?"
T: nods enthusiastically
Deane: mphrfhmr ::staggers out of bed::

And you know what?  They were goooooooooood...

I managed to lie in for a while longer as the pancakes were being cooked, reading a little Catching Fire (the second Hunger Games book), then meandered down for the lovely pancakes and a pot of tea.  Time enough left for a shower and hair-dry before wandering off to my usual Sunday afternoon knitting session at the library, then home again for Family Movie Sunday - we watched Gremlins.

I managed to finish off the pair of treehouse socks: 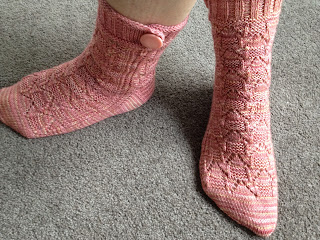 If you're wondering why I'm standing like that, it's  because I was trying to get the 'zip' and button as well as the overall design of the houses on the socks into the picture.

And while we were watching Gremlins, I cast on the Zephyr cardigan with the most scrumptious of yarns, the Malabrigo Rios I purchased in America.  Not much progress on that yet, as I have been busy studying, but I'm doing well time-wise (assignment due mid-June, only needs 20 hours or so of work, so plenty of time!!) so once I get my housework done, it'll be all on!  Until the Round 6 pattern is released for Sock Madness of course...

Snuck in the pair of Round 5 socks while you weren't looking ;-)  Knit these in two days (yes, I had fun taking pictures ;-p): 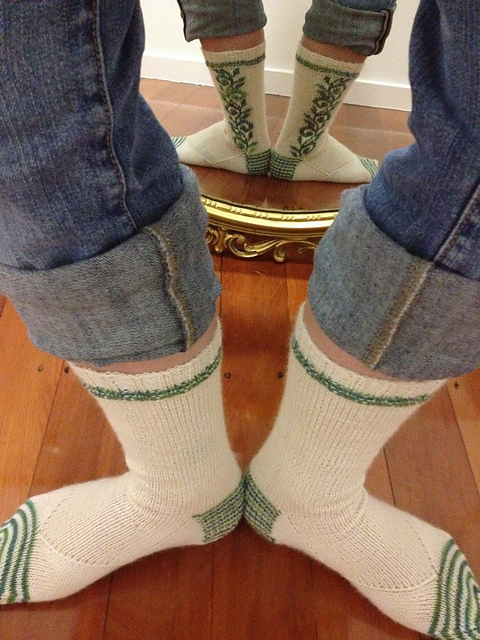 Here's a close-up of the detailing on the side: 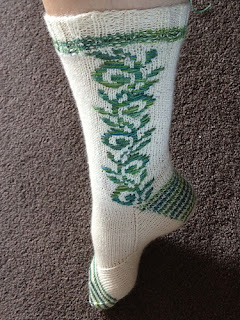 These were really fun to knit, using a technique I'd never even heard of, let alone tried!  It's called roosimine, and the patterns are called roositud patterns.  The method involves 'weaving in' the contrasting yarn as you go.  Once you get the hang of it, it's quite easy.  The hardest part is getting the tension right.  But it's easily adjustable once you've finished the pattern anyway, so no real issue there.  The whole round was over in three days, which I think might even be a Sock Madness record!  (Not including the last round, which is ridiculously quick and only involves the super fast knitters left in each team).

This pattern was Roosimine, and I knit them with 'naked' Skeinz sock yarn, left undyed from last year's Sock Madness, and some Cascade Heritage Silk Paints that I bought in America.  These are going to my mum for Mother's Day.  A little late, but that's okay with her.

This week has been cold and wet so far - fine with me.  I plan on knitting the Zephyr cardigan as quickly as possible, and cast on a hat for the school caretaker, Mike.  He's outside in all types of weather, maintaining the school grounds.  Not only that, he helps the school kids cross the road every morning and afternoon, rain or shine.  The dude is completely bald (he shaves his head daily), and I feel sorry for his noggin, so I think it deserves something cosy.  I'm thinking this hat, with some black sport weight yarn I have in my stash...

I'm fighting the urge to cast on a couple of different pairs of fingerless mitts, and a couple of scarves as well, not to mention a shawl or two, and a sweater... or two... It must be the weather.  That's my excuse anyway.  I must be disciplined and stick to one project!!  Or two ;-)