Now, back to our regularly scheduled programming...

Life has returned to normal in the household of kreachr (well, that depends on what you consider 'normal' to be, but I guess it's our kind of normal) - the boys are at school, complaining about homework, fighting over who played longer on the XBox or the computer etc etc.  Deane is back to working late and not being home in time for dinner.  I just submitted my second assignment, and started the third module only to discover a very large bump in the road.  I'm awaiting a reply from the tutor, so in the meantime I'll hang out here and update y'all on the goings-on.
Speaking of study, I was very pleased to discover that I received an A- for my first assignment - I got 78/100.  Yay!  I was quite happy with that.  Just went through the tutor's remarks and reasons for why I was marked down - could've kicked myself for a couple of them, as I had clearly over-thought things (because, of course, I was trying to make sure I wasn't going to over-simplify it and lose marks...) but for a first assignment in oh, twelve years or so, I'm not complaining.  I just hope I can keep it up!  I'd like to achieve the same or better for the rest of my papers.  That's not likely to happen, but a girl can dream ;-)

Knitting has been sporadic, for obvious reasons (see last two posts), but I have managed to get a few projects finished.

Not quite finished, but half done, are the Sock Madness Optional Round socks: 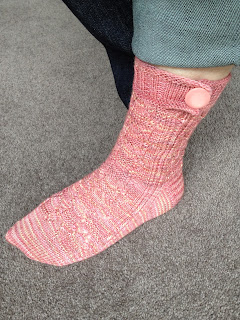 These socks are great!  Designed specifically for Sock Madness, they incorporate several interesting design features, like the button flap at the top (btw, there's no button hole - the button is sewn on after to hold the flap down), the faux zip down the side, and the patterning on the sock itself - little mini houses!  There is a thread in the Sock Madness group called The Treehouse - it's where Madnessers hang out between rounds, and where people go after they've finished knitting their socks to get a little (imaginary) pampering from the cabana boys and gogets - drinks of any kind, paraffin wax hand treatments, massages, whatever you can think of.  It's also where chatter about the next year's crazy pattern designs goes on - will there be zips?  Buttons?  Kitchener stitch over 3,000 stitches?  Steeks?  25 stitch per inch gauge, knit on size 0000000000 needles?  Any combination of these?  Speculation gets a little on the ridiculous side, but it's all part of the fun, and these socks embody the fun of Sock Madness quite well - it was designed by two participants, and I think they did an excellent collaborative job.  The pattern, of course, is called da Treehouse.  I haven't yet cast on the second sock of the pair, but it won't be far away.  I'm knitting them with Serenknitty sock yarn in 'Coppered Pink' (I don't think she sells any more, her etsy shop appears to have closed...)

Next up, the SM Round 3 socks: 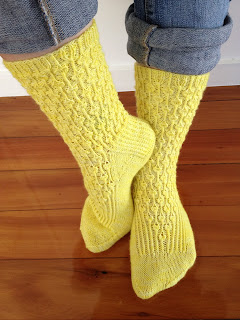 Aren't they beautiful?!?  The pattern is I Want to Beleaf, and it was knit in Vintage Purls 'Sunshine', which was an exclusive Summer Sock Yarn Club colourway for the Demelza shawl, which I liked, but thought was a little too... open... for my tastes.

These were cast on and knit mostly in Florida.  The foot of the second sock (after the heel turn) was knit on the plane from Orlando to LA, and the toe grafting and weaving in of the second sock was completed the day we arrived home (after a nice hot shower, and my cup of tea and marmite on toast).  I was pleasantly surprised to discover that my team had not in fact finished the round without me - there was one spot left!!  I snagged it an hour before somebody else.  I felt guilty for a while about 'stealing' it off them, but then got over it.  She kindly pointed out that I deserved it as much as she did - after all, we'd both knit the same pair of socks, I'd just knit them that tiny bit faster.  So anyway, I decided to name the socks 'Florida Spring Sunshine'.  Or Florida socks for short ;-)

Once these were finished, I decided to cast on a pair of fingerless mitts for my niece, to match the cardigan for her birthday.  Of course, when I say 'match', I mean the colour/yarn.  The patterns have no similarities at all: 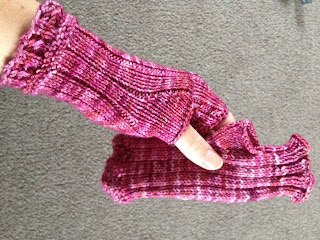 The pattern for these mitts is very simple and easy to follow, and fairly quick to knit.  As it says, they're great to knit up for little girly gifts.  And they fit me too, so obviously a versatile sizing.  T put them on and hinted, very heavily, that although they were pink, they were nice and comfy, and maybe they'd look really good in green.  His favourite colour is green.  If they were green he might like them more.  Once it was established that perhaps I would knit some in green for him (minus the lacy patterning at the cuff, of course), X piped up that he would like some in black.  So I guess I'd better knit some more soon...

On to the next pair of socks!  The pattern, conveniently, was released while I was online checking Ravelry.  It came out quite quickly after the previous round was finished, because the designer was going away and wouldn't be available for questions if they left it too long.  Worked for me - I was the first one finished!! 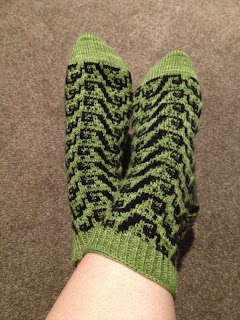 Mosaica socks, knit with the Araucania Ranco I purchased in the US, and some leftover black Patons Patonyle sock yarn I had in my stash.  They were knit using the mosaic knitting technique - something I hadn't tried before.  It's a way of doing colourwork using only one strand of yarn at a time, with a series of knit (or purled) and slipped stitches.  You can also work it flat - something that is very difficult to do with stranded knitting, and mostly avoided (which is where steeking comes in - argh!).  I basically knit these over two days, but as it was 2am when I finished, I counted that as a third day.  Gotta be honest with your dates for the competition...

For a bit of a change of pace, I cast on a hat for my niece using, you guessed it, more Malabrigo Arroyo in English Rose.  Dude, this stuff just keeps going and going!  Out of three skeins, I got a children's cardigan, pair of fingerless mitts, and a hat.  And there's still some left over!!  This yarn is awesome :-)  Anyway, back to the hat: 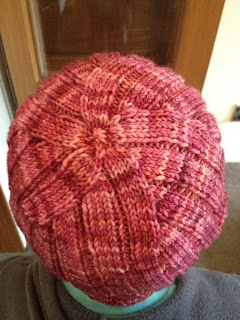 The decreases are what decided it for me - they look really cool.﻿ 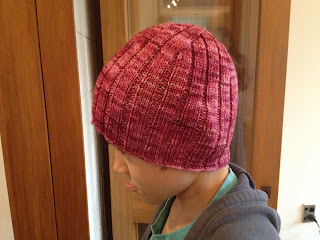 Ahaha, the things we do to our children!!  Making X model the hat for me so I could get a good picture of it before it was wrapped up and sent to Napier with my parents, who would hand it over for me.  The pattern is the Cream of Celery Soup Hat, and it looks fantastic knit with stripes, but I like it knit in one colour too (plus I was trying to use up the yarn!!).

That's it for finished projects for now - on to the second treehouse sock!  After that, I think I'll cast on this cardigan, using that gorgeous Malabrigo Rios I bought in America.  I need a squishy, easy-to-throw-on, warm cardigan.  I love my grey handspun one to bits, but I can't wear it all the time.  I want it to last!  It's starting to get chilly here, autumn is in full swing.  It's my favourite season - the leaves always look so pretty: 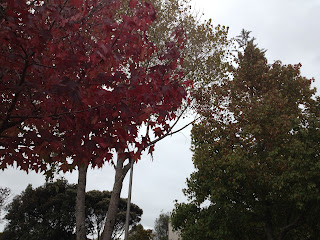 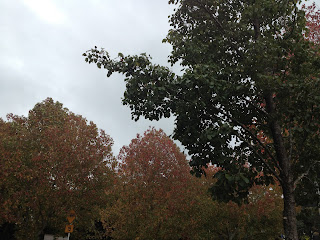 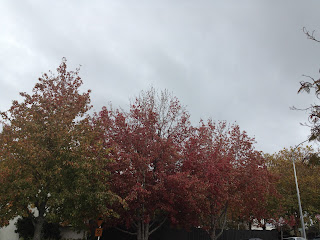