So I knit the school caretaker a hat.  You know why I did it?  Because it made me feel better.  Dude's got a bald head.  Lives alone.  I'm sure he's perfectly capable of going out and buying himself a hat if he wanted one.  Probably doesn't even want one!  Been bald for years.  Shaves it every day himself.  Might not even want to wear a hat.  I don't care.  I still feel better having made him a hat.  Snuck it onto X's head this morning while he was eating breakfast (hence the jammies), so I could get a few pics before wrapping it up and taking it over to school: Closer look at the decreases (which actually turned out to be a useless, blurry pic anyway): 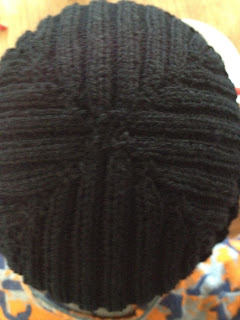 Exeter hat, knit in Patons Bluebell Merino 5-ply (sport weight).  Okay for a yarn, but certainly not my favourite.  It's cable plied, and I just don't like the look and feel of it.  Don't think I'll use it again.  This yarn has been in my stash for some time - I bought it ages ago with the plan of making Deane some fingerless gloves, but just never got around to it.  He bought some cheap nasty ones from the $2 shop anyway, so he can go jump ;-)  I knit the hat to 8.5" before starting the decreases, which seems to be the general consensus among people who've already knit this hat.  The 9.5" as recommended in the pattern seems like it would be just that little bit too long.  I'm happy with how it came out, even if it never gets worn.

I dropped it in at the school library this morning (where the caretaker goes for his break) and the librarian put in a request for socks.  She's a self-confessed 'sock fanatic' and asked for some in red or orange - her two favourite colours.  I'm cool with that, she's a lovely person that I don't mind knitting for.  I think it'll be a plain ol' vanilla pair though, but what will make them cool is the yarn they'll be knit in: 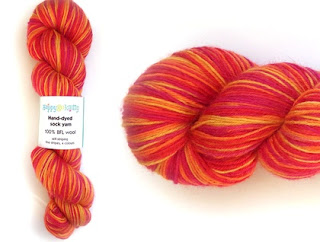 Self-striping sock yarn from happygoknitty!!  (Picture from online store, used with permission).  So its not exactly red and orange, but hopefully it'll be close enough.  Again with the selfish motives... I've been wanting to try this yarn for some time, as I have seen it at markets and heard about it from others.  It's 100% BFL (blue-faced leicester) which, apparently, is good hard-wearing sock yarn that isn't awful and scratchy.  And it won't need a fancy lace pattern, or cabled pattern, or any other pattern, because it knits up stripy!  How awesome is that?!?  I'm thinking I'll do afterthought heels, so I don't break up the stripe pattern.  Thanks to Sock Madness for getting me to learn yet another technique...  (Plus, I'm interested to see how fast I can knit a sock, after seeing this video.  Sure, he knits a heel flap and gusset, but I figure a heel's a heel, right?  Don't think I'll be doing a time-lapse photography thing or anything though (although that would be fun!) - I just think it would take me way longer than five hours.  I'm guessing that guy's a pretty fast knitter).

Speaking of Sock Madness, I didn't make it through to the last round :-(  But that's okay, I still had a truck-load of fun.  The Round Six socks are a bit of a challenge, but they're really pretty.  Here's the first one: 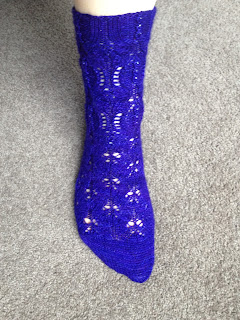 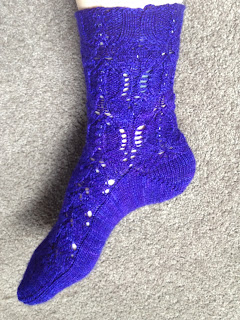 It's a little hard to tell from the pictures, but there's beads in that there sock!!  It's so pretty!!!  Much better in 'for true life' as my boys would say.  What's also hard to tell from the pictures is the seriously awesome colour they are - a dark, rich royal purple.  So beautiful.  I'm knitting them in Vintage Purls Porphyrogenitos, which was the sock yarn club release for the Murex socks.  I'd link to the sock pattern, but it hasn't been uploaded onto Ravelry yet :-(  I liked the socks, but not enough to want to knit it.  I figured the colour was perfect for Sock Madness, and I found some matching beads.

So the Round Six pattern is Dolce Pazzia.  It's slow going for me - I'm not that experienced with fiddly lace knitting, and have zero experience knitting with beads.  I have to use dental floss to attach the beads (method shown here), instead of a crochet hook, because I can't find one tiny enough to fit through the centre of the beads.  It took me 12 hours to knit this sock - I got up at 3am because T was invading my bed and refused to get out (he was a little under the weather) and I couldn't sleep, plus the pattern had been out for two hours already.  So I trudged downstairs and cast on, then slogged away with the fiddly pattern and tiny beads until I'd finished one sock.  Logged on to Ravelry to discover somebody from the fast team had already finished!!  Super speedy!  I fluffed around a bit with the second one, knowing there wasn't much chance of making it through (only one person per team makes it to the last round), and sure enough, four hours after the first person finished, the next person finished - somebody from my team.  Game over for kreachr.  At least now I get to enjoy knitting it, rather than rushing through it.  And I don't have to stress out about the last round!  I can sit back, relax, and wait to see who takes out the competition :-)  I'm pretty sure I know who it'll be...

Well, time for me to go, it's school pick-up time!  I shall be knitting some more on the pretty socks tonight, and perhaps some of the sleeves of my Zephyr cardigan - the body is finished, I just have the sleeves to go.  Exciting!  I can't wait to wear it.  Starting to get pretty chilly now.  Enjoy the rest of your week, and stay warm :-)