What is a good weekend?  Getting out and enjoying life?  Staying in and enjoying some rest and relaxation?  I couldn't really say.  This weekend I did a little of both.  Let's start with Friday (because according to my boys, the weekend starts as soon as the 3 o'clock bell rings at school).

Friday afternoon saw me in the school library tidying up the books in the dewey decimal section.  Lordy, do those kids know how to mess up the numerical order!!  It was oddly enjoyable.  I also managed to sneak the librarian's socks on my feet for a quick pic.  She'd kept them in the library, hoping to snap a pic herself when she had some time, but (unsurprisingly) never did get around to it.  A school library is an unexpectedly busy place. 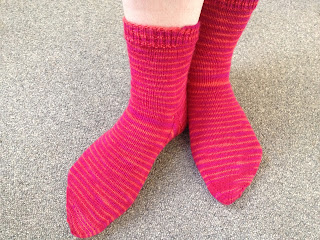 As you can see, they're fairly plain socks.  Knit from the cuff down with 12 rows of 1x1 ribbing, I knit the leg to 5.25" from CO edge, did a standard slip-stitch heel flap and gusset, and knit the foot to fit her 24cm (9.5") feet.  Standard toe.  I timed myself to see how long it took me to knit the first sock, because for some reason I was curious, and according to my iPhone stopwatch, it took me 5 hours, 36 minutes, and 9.4 seconds to knit it (not including cast on, first row, and grafting the toe.  So I cheated a little ;-P)  Not a bad effort I suppose.  I guess, in theory, I could knit a pair of socks in a day.  Hmm, I see another challenge forming...

These socks were knit, not with the Happy Go Knitty yarn I originally purchased for them, but with some Touch Yarns Magic Merino I found at Crafty Knitwits.  It was a little better suited colour-wise I think.  The librarian likes red and orange, which this yarn (mostly) is, whereas the Happy Go Knitty yarn had a lot of yellow.  Plus it means I get to keep it for myself.  Mwaaaahahahahahaha!!!  (Selfish much?)  And the unforseen bonus?  There is enough of the Touch yarn left for a whole other pair of socks!  Perhaps I'll make her another pair for Christmas :-)

So while I was reorganising books, I got chatting to another parent about knitting.  She was very keen to learn, so I gave her some ideas of where to go for supplies, and wrote down some websites to check out.  I grabbed her email so I could send some links as well.  It started out that I was going to send her to somewhere that teaches knitting, but by the end of the weekend I had volunteered my services to teach her myself.  Why?  I have no idea.  I'm a terrible teacher!  Oh well.  She seems over-the-moon about the prospect of learning, so hopefully I won't put her off with my lack of... je ne sais quoi...

With a good bye to everyone when the bell rang, the boys and I headed home to start our weekend of blobbing and what have you, and I cooked a yummy dinner.  Once the boys were in bed, I watched some Vampire Diaries (OMG the ending of season three is ::imagine weird screechy noise here, depicting ridiculous over-excitement::) and wandered off to bed, where I fell asleep trying to read A Clash of Kings (second Game of Thrones book).

Saturday saw me meeting up with my friend Margaret, who was up from Wellington visiting her daughter and grand-daughter.  We went to a market that was literally a one minute walk from my house that I was heretofore completely oblivious about.  Having said that, the stuff at said market was mostly for babies.  And my boys are a little past that stage.  Although I did manage to get them some new, nearly indestructible (for me) drink bottles.  You see, I'd bought them drink bottles some time ago, and being the good mum, decided to wash them first.  Although, also being a relatively lazy mum, put them through the dishwasher, where they warped and no longer stood straight on their own, and were prone to falling over.  Duh.  The new drink bottles are a lot more hardy - they're made out of stainless steel.  And I got two for $20 (original retail price $30 each).  Score!  btw, they're dishwasher safe.  I checked ;-)

I also knit a little bit on the latest Vintage Purls socks - the first instalment of the Winter Sock Yarn Club.  I won't post any pics yet, as some of the Club members haven't received their parcels, and I wouldn't want to ruin the surprise.  Although the odds of any of these people reading my blog are slim at best, you never can be too careful.  Plus the pattern isn't linked on Ravelry yet (see aforementioned reason).  I absolutely adore the colour, and the pattern is proving to be quite the challenge for me.  It has a very interesting cable right up the middle of the sock, and I have to admit I screwed it up a little bit.  I wasn't happy with it because it didn't look right, so decided to drop the sitches to fix it rather than frog back, because it also has cables running the length of each side, plus the rest of the sock is reverse stockinette, and I don't seem to enjoy purling as much as knitting. You get the idea - I was trying to avoid re-doing a large chunk of knitting.  Of course, dropping stitches and reknitting them is fiddly at the best of times, but on 2.5mm needles, with a dark-coloured yarn, and a tricky three-way cable?  Crazy!  I did manage to fix the cable but got rather stroppy when, upon fixing it, discovered it looked untidy due to the stretched stitches beside the cable that resulted from the 'sock-surgery', and threw it across the room.  A cup of tea and several (hundred) deep breaths later, I picked it back up and readjusted the stitches so it looked 'normal' again, and resumed knitting.  I have mastered the cable now, and can happily knit the pattern without having to refer to the chart.  Always a good thing.

Sunday morning involved pancakes with bacon and maple syrup, a supermarket visit, and a trip to Kraftbomb, where I discovered Happy Go Knitty had a table.  Of course I couldn't walk away without a purchase (specifically this BFL sock yarn).  I'm thinking it would be awesome for these socks, but what colour to go with???  Any suggestions?  White?  Black?  Blue?  Green?  Yellow?  Help!!

I knit a little bit on the VP Club socks, but got to the gusset increases and couldn't be bothered with them.  Don't know why.  Instead, I cast on another project on THE LIST.  Something that is fairly mindless to knit, and I can cart it around to places like the laundromat (which I have been avoiding by writing this post.  It was raining).  There was no knitting group on Sunday, due to everyone being away/sick/moving house/settling into new house/recovering from first week at work, so I stayed home and knit.  Not so bad, but I'll definitely be going next Sunday.  School holidays!  I'll be grabbing every chance I can to get out of the house and away from the male hominids!

It is now Monday, the boys are at school, Deane is at work, and the sun has come out.  I'm thinking laundromat, then library, with lots of knitting crammed in.  Have a good week!!