Another challenge finished, on to the next

The Tour de Fleece finished over the weekend.  As expected, I didn't get much done.  However, I got even less done than planned, so this year's Tour was doubly sucky.  A grand total of 150g spun for me, not the best effort... 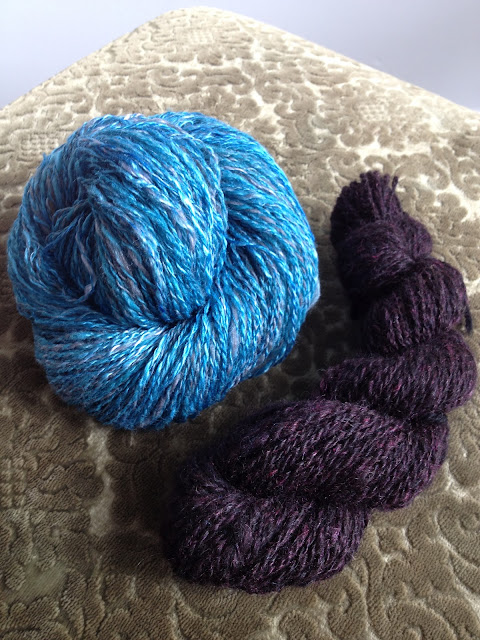 The blue is a punta wool/bamboo/tencel blend yarn, spun from two batts I won from Nerd Girl Yarns during the Harry Potter Knit & Crochet House Cup many moons ago, I believe for a spinning project.  The colourway is called Resurrection Stone, and was spun into a rather loosely plyed (although it hasn't been washed and whacked yet, maybe it'll bloom and fill out a bit) light fingering to sport-ish weight (I think) two ply, about 100g, 324 metres aroundabout.  Ah, who needs to be precise? ;-)  I could weigh it, and I could measure it, and I could check the wpi, but really, who cares?  It'll just piss me off when I go to knit with it later, and have no idea what I've got :-)

The other skein is a whopping 50g of alpaca/silk, which I think I already blogged, so won't go into detail here.

So, another 'competition' over, and next up, starting this weekend, is the Ravellenics.  Not so much a competition as a personal challenge (much like the TdF) - run for the duration of the Olympic Games, the idea is to set yourself a project or projects designed to challenge your skills or limits.  For example, this year (my first year of the Ravellenics, formerly known as the Ravelympics until the USOC packed a howlie and stamped their feet) I have signed up to two teams - a Harry Potter fan group team, and the Sock Madness team.  I have to knit a project for each team (since one project cannot be submitted for more than one team) - I am going to attempt (note the word attempt) to knit this sweater (for Team HP Crafters) and these socks (for Team Mad Minnows with Fearless Humming Needles that Could be from Sockinavia, aka Team SockMadness.  It's a long story...).  Now I know if I put my mind to it, I can knit a sweater in 17 days.  This is a construction I haven't tried before though, and it's an all-over pattern - therein lies the challenge.  As for the socks, well, socks aren't a challenge in and of themselves, but they are constructed using a technique called twined knitting, which takes a bit of getting used to, or so I'm told by the others in Sock Madness that have attempted it (and mostly succeeded).  I haven't tried it yet, I've been saving it for the Ravellenics (read: I haven't got around to it because other projects keep grabbing my attention).  It is also (so I've been told) quite a slow technique, and to knit this pair of socks within the time frame whilst also knitting an adult sweater... well, you get the point.

Plus, of course, I will have to continue my studies, and various other essential-to-household-harmony duties.  But, studies are going well.  I have finished the first module of my current paper - Archives Management, fascinating stuff - and will be starting the second shortly (housework first, I think).  And official results are in - I scored a B+ for my first tertiary level paper!!  Hurrah!!  I think that's a fairly good effort.  I know my second assignment dragged the mark down a little (For the three assignments I got A-, B, A- respectively) but I'm generally pretty happy with how it went.  I've learned quite a bit from the experience, and hope to continue improving.  My aim is to get a B or better for all my assignments and papers.

Exercise is picking up again too now, with ice skating lessons going relatively well.  Two lessons under my belt, and I haven't hit the deck yet.  Ooh, hope I haven't jinxed it...  I was hoping to go snowboarding this week at Snowplanet, but the boys are finishing school early tomorrow for Student Led Conferences so there won't be time, and Friday's booked for other things.  Maybe next week...  I had a go at Kinect Adventures the other day with X - quite a fun way to get some exercise and play with your kids at the same time.  Gets them off the couch and moving too - an added bonus!

I'm hoping to start fitting in a few short runs next week as well - I haven't been for a run since March I think.  Too long.  Time to get back into it again, for sure.  Hope you're having a good week, wherever you are.