Sometimes I do things just because 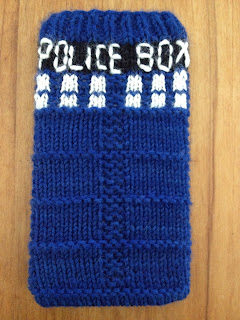 My iPhone was cold...

Knit the cover using this pattern, and leftover Wollmeise (blue) and Patons Patonyle sock yarns.  Cute, huh?  Had to make a few mods so it would fit (the original pattern is for an iPod), but I think it worked out quite well.  Would've preferred to knit the words in rather than embroider them on afterwards, but it wouldn't have fit.  Oh well, it's still cool.  This gave me something small to do while the kids were at ice skating.  I had my first lesson yesterday too, it was really fun!  I know how to stop without hitting the wall now!!!  And go backwards (although not well, and I probably look like a deformed, senile duck).

Deane has been informed that his sweater will not be ready until next winter.  I'm sorry to say that the black stockinette is incredibly uninspiring, and it's difficult to shape the armholes when he isn't here to try it on 90% of the time.  I think he's okay with that.  Which leaves two other projects on the needles.  Perhaps, rather than sitting here fluffing about on Twitter (which, alas, I have signed up to.  Only so I could follow 50 Sheds of Grey mind you) and waffling on here, I could be watching something interesting and knitting.  Pfft.

What's that you say?  I should be studying?  Well, I've done a grand total of three hours study so far this week, and have nearly finished the first module - the assessment for which cannot be done until mid-August.  You see my dilemma?  I'm going to have to start module two and hang about until the assessment can be completed.  Which means I'll get the second assignment finished, then have to wait a month and a half to get my results, during which I will finish module three, the assignment for which is not due until 26th October.  And on it goes.  Could've sat two papers this trimester after all.  Oh well, too late now.  Seriously considering going to the local library and offering my services as a reshelver for several hours a week.

Perhaps the Ravellenics will slow me down - the Olympics start in ten days (woohoo!) and I'm aiming to get this sweater and these socks knit during the games.  Doubt I can manage both, but it's good to challenge yourself, right?

Right, better go do something useful.  Like vacuuming...
Posted by kreachr at 12:59