Yep.  Read it.  Kinda had to really.  I'd heard so many bad things about it that I wanted to see what it was all about.  Fifty Sheds was so funny, I was intrigued enough to read the 'original'.  My conclusion?  Far too many oh mys and murmurings, the writing is a little crude, and it seems like she had a copy of a thesaurus on her desk and was attempting to use every word in it, but to be honest it wasn't as bad as I was expecting.  Then again, I'll read most stuff.  I can understand why a large amount of people don't like it.  Everyone is entitled to their opinion, and nobody has to read the book if they don't want to.  Me?  I'm part way through the second book now ;-)  Hey, don't judge me!  Maybe you secretly like it too and just don't want to admit it...

Soooo... the Olympics are in full swing, and I'm thoroughly enjoying watching as much of it as I can (on the one free-to-view channel available - I'm not paying for Sky TV plus Sport for a year just to get five channels of a sporting event that runs for two and a half weeks!).  I've seen a total of 4 1/2 hours of artistic gymnastics so far, both mens and womens.  My favourite event by far.  Saw a little synchronised diving this morning - my second favourite.  Caught a few events with kiwi competitors - rowing, swimming, equestrian, hockey - so good to watch.  The womens Black Sticks had a great game against Aussie - let's hope they continue to do well.  Unfortunately their male counterparts didn't do so well in their first game.  Oh well...

Did you see the opening ceremony?  I loved that J K Rowling did a reading, and that Voldemort had a part to play, but I have to say my favourite parts were Mr Bean and James Bond.  They were awesome.  And the Olympic Flame cauldron?  Awesome, beautiful, brilliant.

And of course there is knitting to be done while for the Ravellenics while the Olympics are underway - I've cast on one of the two projects I have planned - the Bellevue sweater.  So far, I've knit the back: 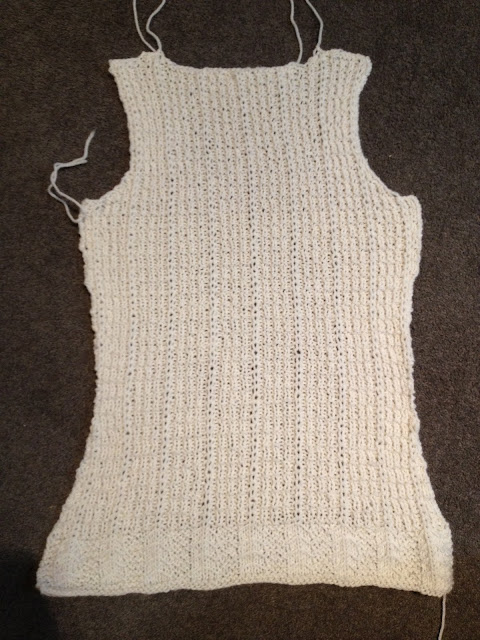 A front, two sleeves, and a collar to go, not to mention the sewing up...  This sweater is being knit with the large amount of yarn left over from the aran afghan I knit last year.  I think I bought it for $2.30 a ball.  I've gotten pretty good mileage out of this yarn, pretty happy with that.

I need more sweaters and cardigans.  I went to put on my simplicity cardigan the other day, and discovered this hole: 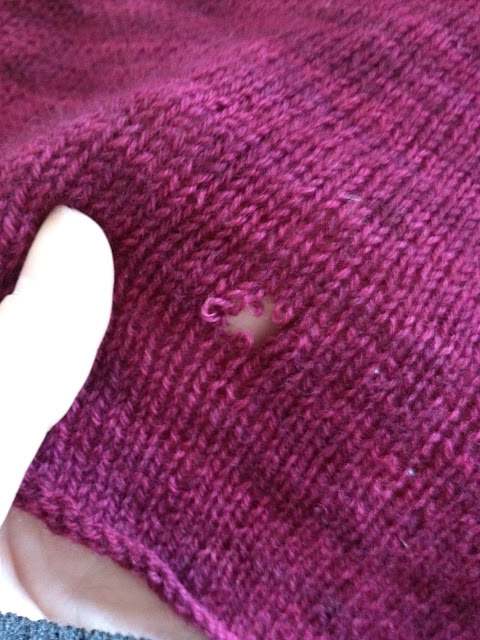 Gutted!  It can be fixed of course, but I wasn't terribly happy to find it.  I'm not sure if it's been caught on something, or if it's been moth eaten.  My money's on the former.  I couldn't find any evidence of moths anywhere, so I really hope I just caught it on something and didn't realise.  No idea when I'll get around to fixing it...

I managed to get another few bits and pieces out of the way before settling in for the Ravellenics - a pair of mitts for my nephew: 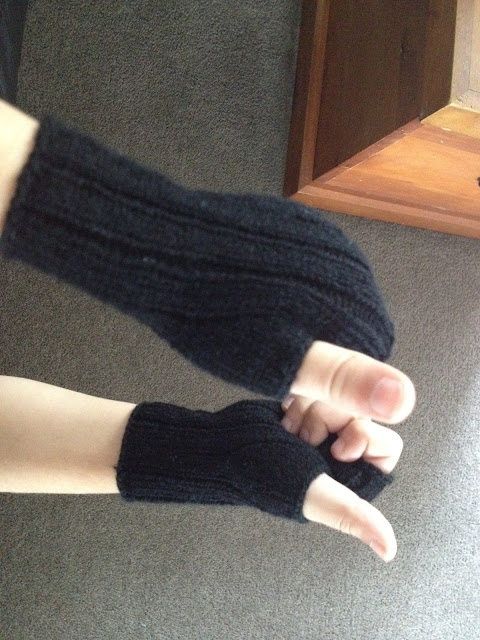 Expertly modelled by X ;-)  Knit with sport weight yarn left over from the hat I knit for the school caretaker, using the same pattern I used for my niece's mitts, minus the frilly cuffs.  And I sewed up a bunch of ponytail scarves (found on Sew Mama Sew) for my niece, so she didn't miss out on a wee parcel.

Now that she's received them, I can post pics of the fingerless mitts I knit my mum for her birthday: 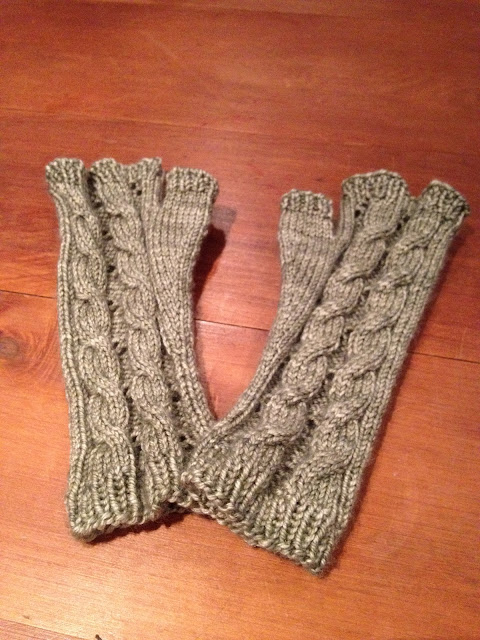 Terrible photo I know, but it's near-impossible to take a decent photo of your own hand, and even more difficult trying to take a photo of both!!  You get the general idea though.  This pattern is based on the hat design, which is based on the hat worn my Hermione in Harry Potter and the Half Blood Prince (although I knit two hats much the same using this pattern in 2009.  Not that it matters).

I used some MadTosh Pashmina left over from the Christchurch shawl I knit last year.

The other pair I knit were these: 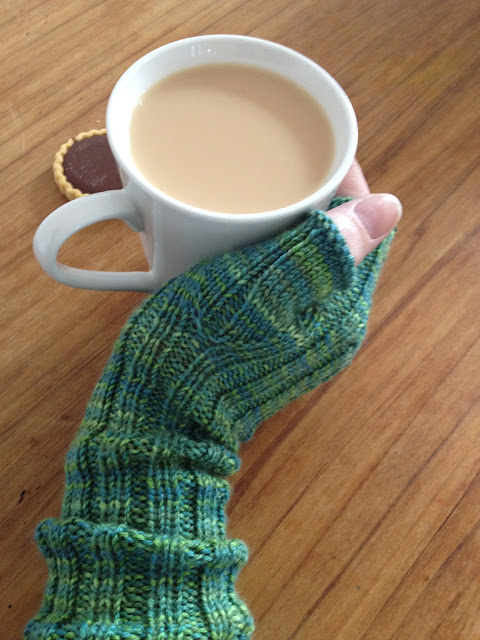 Here's what they look like when you're not wearing them: 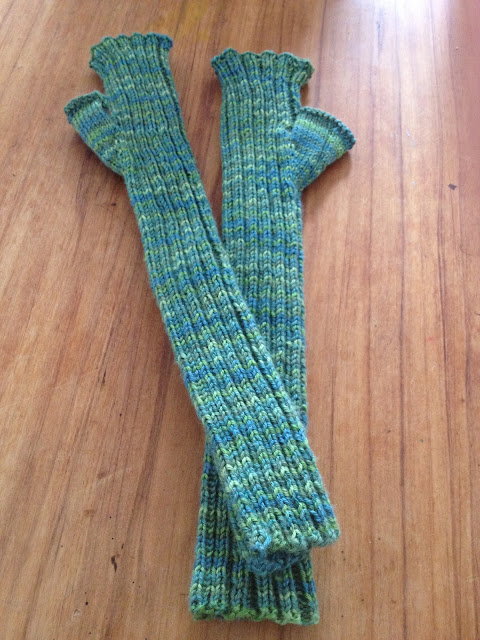 Weird and skinny :-)  These were knit with Cascade Heritage Silk Handpaints - I purchased it in the US, and used some for the Roosimine socks I knit and gave to mum for Mother's Day.  So now they match ;-)

You see what I'm doing here?  Using up stash!  Feeling pretty good about that.  Or rather, it makes me feel better about the other yarn I've bought recently...