I had intended to knit Deane a pair of socks for Father's Day, all sneaky-like, without him knowing.  Because, y'know, presents are supposed to be a surprise.  When I came up with this idea on Tuesday, I thought Father's Day was the following weekend.  I discovered on Wednesday that it was indeed this weekend.  So far I have one sock done, and ten rows of the second: 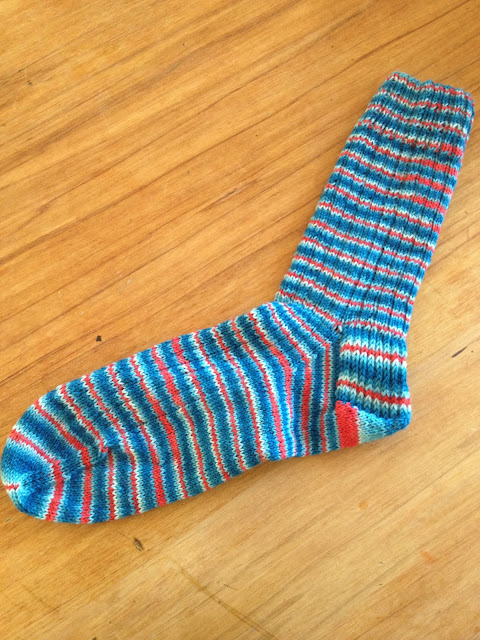 It is very hard to knit a pair of socks in a matter of days when you're trying to keep it secret from your Significant Other.  I would have no problem achieving this if a) he wasn't around, or b) I could knit them in front of him.  But a) he's actually been coming home from work at reasonable hours this week (typical!!), and b) it wouldn't be a surprise if he knew I was knitting them.  Obviously.

It is now Friday mid-day.  He wants to spend Saturday doing something 'as a family' (trail run through the Waitakere Ranges, anyone?  Just me?  Okay, y'all can walk then) so I'm pretty sure I'm going to run out of time.  Unless I lock myself in a separate room tonight and tomorrow night and knit like a mad-woman... hmmm...

As for my dad's Father's Day present, it's been sent.  I decided to put in a little home baking (although I'm not sure why, mum always bakes good stuff) - people seem to like my shortbread, so I thought I'd go with that.  But I tried a different recipe this time - brown sugar shortbread.  The first (largest) batch was in the oven about five minutes too long so they're a little toooooo brown.  The second batch came out okay.  I taste tested some from each batch (rather thoroughly, just to be extra sure ;-P) and there doesn't seem to be much difference in taste, but next time, I think I'll stick to the tried-and-true.  Oh well, hope he likes them anyway.

One thing that has been going right at the moment is my running.  I did manage to go for a run whilst away in Napier.  Two in fact.  A slow (7'41" av. pace) 5km on Saturday with my bff and her dog.  There was lots of walking involved, and I ended up leaving them behind to finish the last 2km, then jogged back to meet them.  She wasn't looking too healthy to be honest.  I was worried she would keel over if she kept trying to run!  She, and her dog, made it home okay, but was pretty sore the next few days.  Oops.

To make up for the slow run, I went for another 5km (5'51") the next day as well.  Then a slightly faster 5km (5'50") on the Monday.  I had intended to go for a longer run in the morning, but was disappointed to discover when I got up and dressed at the usual time of 5.45am, that I had left my running shoes in Napier.  So I hopped back into bed, and used that excuse to go out and buy a pair of trail running shoes that day.  And of course I had to break them in, hence the run for the third day in a row (I usually only run two then have a rest day).  It was in the afternoon though, so was shorter than intended.  Turns out I'm not good at running in full sun any more.

On Wednesday I decided to give the new shoes a good test, and went for a longer run.  This time I managed a pretty decent 13km!!  I was rather happy about that, and I felt really good too.  The pace was a pretty slow 6'23", but I was stoked, and felt like I could've kept running.  I had to get home though, to get the kids sorted for school.  Deane completely missed my text at 6.45am ("I'm running a bit late, haha, can you get the kids breakfast") - his phone was on silent.  And he sleeps like the dead.  I managed to get a good sunrise pic though - this was taken seconds before the sun peeked up over the distant hills: 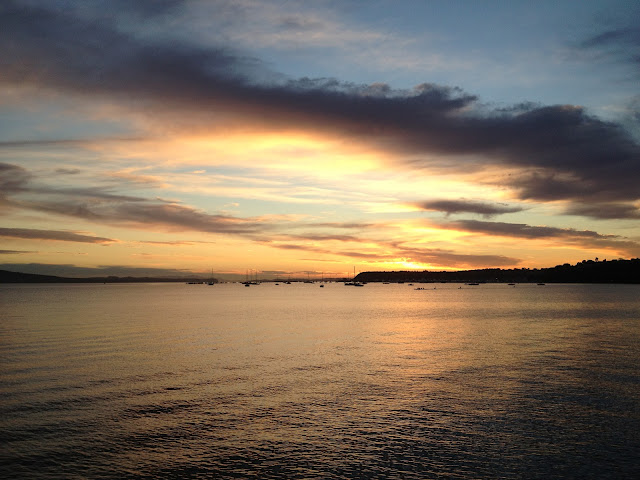 This morning I managed a slightly quicker 10km, at about 6'15" average page.  And I have decided that next week, I'm going to give 16km a go and see how that feels.  Which means I'll need to get up at 5am.  Oddly though, this early-morning-run-before-breakfast thing seems to really be working for me.  I'm loving it!  I find now that I'm awake before the alarm in the mornings, even on a rest day.  There's definitely something to be said for being an 'early bird'.  Having your exercise out of the way before the day even starts is just a really good feeling.  Plus you have more hours in the day to do other things.  Like knit giant man socks.
Posted by kreachr at 11:59