It hasn't yet been a whole week since I last ran, but it feels like a month.  I find myself giving runners whizzing past my kitchen window the evil eye at all times of the day.  I had horrible thoughts about a woman running past recently - she was wearing a running skirt.  Why on earth would you want to wear a skirt while running?  What's wrong with shorts, or tights?  Seems a bit extravagant and fashion-show-esque to me.  Like the people that go to the gym wearing makeup and all the latest gear and barely break a sweat.  Then I realised I was just being all bitter and twisted, envious that it wasn't me out there, pounding the pavement.  People can wear what they want when they run.  If a girl wants to look pretty and wear a skirt, then so be it.  Personally, not my thing.  But to each their own.

I haven't been completely idle though, as I have managed to visit the Tepid Baths three times this week (no visit Wednesday or Thursday - other stuff to do.  Plus I only have (had) one swimsuit.  More on that later).  This morning, I was very happy to achieve a fairly decent 1,000 metres.  Or does it sound more impressive when you say 1km?  Either way, considering my completely cabbage swimming technique, I thought that was pretty damned awesome.  That's a total this week of 2.1km.  I look forward to beating that next week.  And I think my technique is improving.  I'm also getting faster.  Having said that, I still take a wee break between laps.  Some a matter of a few seconds, some a little longer.  I guess it's a bit like taking a walking break during your run (which I don't normally do, unless you count the occasional hill.  But I'm better at running than swimming.  More practice I suppose).

I had my knee assessment on Wednesday, and it's official - I have patellofemoral syndrome, aka: Runner's Knee.  No surprises there.  Also not surprising, it is mostly caused by overuse.  Whoops.  On the plus side, there is no ligament damage, and with a bit of time and lots of muscle strengthening work, I should be able to get back into running soon.  Ish.  My left IT band is weak, which is causing my knee to turn inwards, and my quadricep muscle to tighten.  I was not aware of this, so having the physio explaining exactly what is happening and how I can fix it is really good.  Now I just need to keep doing my stretches and be patient.  Ugh.  At least I can swim.  However, only owning one swimsuit is making it a little hard to swim every day, or nearly every day.  So I decided to head out and buy some more.  And I figured it was about time I stop being so prudish and get a bikini.  Thousands, nay, millions of women wear them regardless of body shape or age, so why shouldn't I?  Right?

I just have this slight... body image issue... created when I was pregnant with X.  I put on a massive 25kg - yes that's right, 25kg.  Over twice the average weight gain for a normal pregnancy.  That's more than what X weighs now, at age nine!  Ridiculous.  In any case, it created a lot of stretch marks.  Sadly, putting on that amount of weight in the space of about six months is a surefire way of ending up with a tummy covered in wrinkly old-lady skin.  My stomach is flat, just a little... textured.  Deane says I should just get over it and stop worrying, nobody cares.  So I'm trying to.  I went out and bought a bunch of bikini tops and bottoms (they had this awesome deal on at the Cotton On Body outlet store in Dressmart Onehunga - $2 a piece!  Bargain!)  Now I just have to work up the courage to actually wear them.  Let's be honest, they're not the most practical attire for swimming.  They're probably not even really designed with swimming in mind.  Rather, lazing about by the pool, or bouncing around on the sand looking fabulous.  Well, I'm going to buck the trend and actually wear them for swimming.  Eventually.  Perhaps.

We're edging ever-closer to the summer months - it'll be daylight savings time before we know it (just over a week to go I believe), and time to get out the summer dresses, sandals, jandals, sunscreen and hats.  I'm actually looking forward to it.  Of course, it helps to be sure we're looking our best.  So I'm making a real go of eating healthier (and getting plenty of exercise, obviously!).  Yesterday, I made a yummy brown rice salad.  I couldn't find a recipe available that I had all the ingredients for, so I made one up of my own, using what we had in the kitchen.  It was as follows:

Boil the brown rice for a good 30 minutes or so (nothing worse than over-chewy brown rice!  Ask me how I know...), then blanch the broccoli, cauliflower and edamame for three minutes.  Drain and throw into a large bowl with the carrot, seeds and raisins.  Whisk together:

Pour over the rice and veges and stir until well combined.  Nice warm, even better cold the next day.  As a brown rice salad should be :-)  Yum!!  That was dinner last night, and lunch again today.  Tonight, steak and salad!  Garden salad, not brown rice salad.  Just sayin'...

Kniting is plodding along, probably about time to visit The List again perhaps:

Still branching out a bit and knitting other stuff, but I'm getting there.  Only seven things left to knit before 31st December.  That's totally do-able, right?

T loves his new socks - I haven't got a picture of him wearing them, nor the completed pair, but I have got this pic: 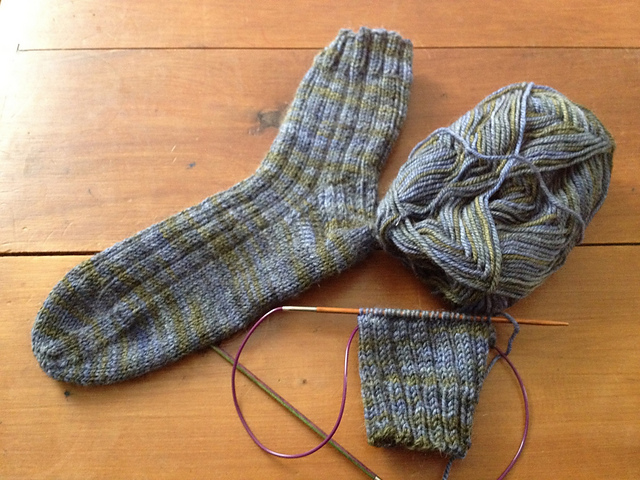 I called them Mini Pitts, because they're just a smaller version of the Mr Pitt's socks I knit for Deane and dad (the black pair with the red toes when to dad for his birthday last week).  These minis were knit in Skeinz Random sock yarn (the same composition as Waikiwi), on the same 2.75mm needles, with pattern mods as follows:

Now I just have to make a slightly bigger pair for X.  Might change the ribbing pattern so I can easily tell the pairs apart, since his will be knit in the same colour.  Last night, because I didn't really feel like knitting another pair of socks (because seriously, four pairs in a month is enough to earn a break) I cast on the Step Ribbed Stole, with some scrummy Touch Yarns Hand-painted 8ply that was gifted to me a little while ago.  There's no hurry for this, and no definite recipient in mind (although ideas are forming), so I only did about 15 rows before putting it down for the night.  What I discovered when gathering the needles and yarn for this project is a) I need more 4.5mm needles, and b) I was knitting Deane's sweater with two different sized needle tips!  One was 4.5mm - the correct size - and the other was something like a 3.75mm, which explains why I was getting weird ridges in the knit fabric.  I thought it had something to do with my purling technique!  What a dork!  So I have decided to completely frog that half-hearted attempt, and put it aside for now (or rather, leave it where it was, languishing in the WIP pile).  I'll make a concerted effort to have a fully completed sweater knit for Deane in time for next winter.  I haven't had any time to work on my Rock Island shawl since last weekend, so no progress there.  Hopefully next week.

Right, must dash now, the garden needs tending and I've been putting it off for way too long.  Enjoy your weekend, wherever you are :-)
Posted by kreachr at 14:16