Last week started out good.  I got most of my assignment done (should finish it today), and I managed three 5km runs, one of which was my FASTEST EVER (!!!) at 28:24, an average page of 5'40".  I was very happy to get the little congrats message chatting at me from my phone at the end of the run.  Yay Nike+ running app :-)

I was feeling so good that I decided to go ahead with the longer 8km run on Sunday.  I wore my newer shoes just in case my Nikes are worn out and need replacing.  (I thought about how long I've had them, and although a year doesn't sound like a long time, especially when there was a four month break from running during that year, they've actually done over 400km, so it's probably about time to retire them!).  My knee was really good for the first 5km, then it started to get sore.  By the end of the run, it was pretty much pooped.  By yesterday afternoon I had come to the conclusion that I was being a complete idiot still trying to run, and I really needed to take everyone's advice and give it a break and a chance to recover properly.  This was reinforced when I discovered this morning that it was still difficult to walk any significant distance (say, to the letterbox and back).  So as of today, I'm on a three week break from running :-(

I went to the Tepid Baths this morning for a swim instead, and managed my longest swim ever (I'm not much of a swimmer, let's be honest).  20 laps of the pool, which I believe is 25m.  So, 500m.  It took me about half an hour, and I had a wee 20-30 second break between each lap (alternating freestyle and backstroke - physio said breaststroke was a no-no, and I'm too uncoordinated to do butterfly), but I was pretty happy at the end of it.  Unfortunately my knee still hurt, but at least swimming is a little less... harsh.

I'm having an assessment done by the physio on Wednesday, so we'll see how that goes.  I hope to be back on track before the quarter marathon in six weeks time - if worse comes to worst, I can walk it, but I'd rather run it and try to beat last year's time of 1:05:08.  Here's hoping!

As for knitting, I've managed a good start on my Rock Island shawl: 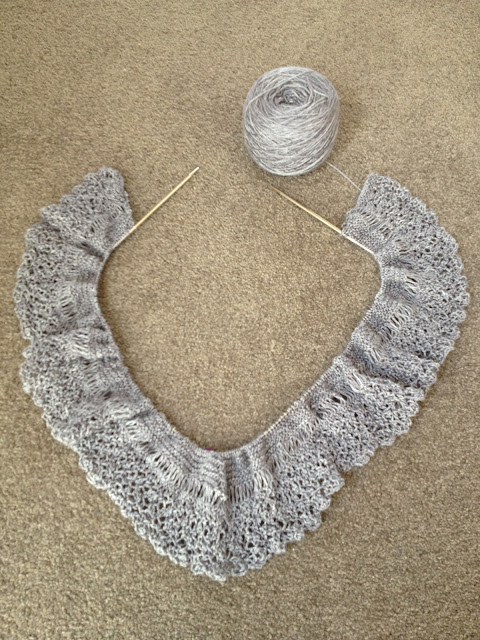 It doesn't look like much at the moment, but that's the whole border finished.  71 repeats of a 12 stitch, eight row lace pattern, then 291 stitches picked up along the edge, and about eight or so rows of garter.  I'm now onto the main lace part of the shawl.  It's going to take a little concentration and some quiet time since each row takes about 10-15 minutes, so it'll have to wait a bit.  I cast on a pair of socks for T for something to do at knitting yesterday.  Started with this toe-up pattern, but ended up making the foot too long and I really didn't like the heel construction, so I ripped it back and decided to go for a cuff down using the same number of stitches, since the other sock seemed to fit well otherwise.  Again I knit past the heel using a standard heel flap and gusset, but for some reason, even though I'd used the same number of stitches and exactly the same ribbing pattern (and yes, the same needles), it didn't fit!!!  So I had to rip that attempt back as well.  Now I'm back to square one, and trying to decide whether I should just increase the stitch count or ditch it for now and knit a different easy/portable project.  Decisions, decisions...

Ooh btw, just wanted to share some yummy stuff we had yesterday.  When I arrived back home from my run it was 7am - the rest of the family is usually still in bed at that time on the weekend, but I was surprised to discover Deane and T hiding in the kitchen waiting to jump out at me.  It is VERY unusual for Deane to be up at that time, especially on the weekend.  I went and had a shower (it was raining, and I was soaked - running in the rain is a whole different experience!), and Deane cooked breakfast.  We had whole wheat waffles, bacon and grilled tomatoes (and Deane had grilled portobello mushrooms as well).  It was so good!  Probably more so because it was after a soggy run, and it was cooked by somebody other than me :-)  As a bonus, there were leftover waffles which I had this morning with fresh raspberries and strawberries, and maple syrup.  Yum!!!

For dinner, we had this fish, again cooked by Deane.  He used much less cayenne pepper, knowing the kids and I aren't fans of ridiculously spicy foods, and he had to wing it a bit with the 'honey mustard' - I believe he used honey and mustard ;-) - but OMG it was awesome!  Even better, he made a salad with mixed baby lettuce leaves, red pepper, grated carrot, a handful of raisins, some sesame seeds and grated parmesan, with a dressing of macadamia and lemon myrtle oil, balsamic vinegar, lemon juice, and a bit of salt.  Freakin' amazing!!  I could totally eat that every day for a week!  Sorry, no pics, it was so good I ate it too fast to even think of grabbing the camera.

Tonight, I'm going to try my hand at making dahl (maybe with some spinach added), and some roti bread.  I found the roti recipe in one of my latest foodie mags.  The boys absolutely love roti, and it would be so cool if I could make it myself, rather than buying it at the supermarket.  So I'm going to give it a go.  On the plus side, it doesn't contain yeast.  Wish me luck!

Last week I bought a bag of onions, forgetting that I'd already bought a bag, so I'm thinking of making some onion marmalade.  I adore onion marmalade, but I hate cutting up onions - my eyes are very sensitive.  I blame it on the laser surgery ;-)  Perhaps I can wear my swimming goggles (bought this morning before my swim) to avoid being assaulted by onion fumes...  Oh, there is so much good food in the world!  I love food.  It is awesome.  My current favourite is soy milk.  Especially vanilla flavoured soy milk.  Dangerously good!  Have to try not to buy it, lest I drink the entire carton in one go.  Ooh, now I'm daydreaming about roast lamb...  Must be time for lunch, I'm rambling about food and getting hungry :-)  Eat well and stay happy, people.  Enjoy your week!
Posted by kreachr at 12:10