After my long 20km run on Sunday, my knees were a little sore. This has happened before - like last November, when I ran 15km for the first time. I wasn't too concerned about it, knowing I planned to have a rest day the next day. Deane said "don't you think you should slow it down a bit? If you increase your distance too quickly you'll end up injuring yourself", and I, of course, brushed it off. I reasoned that Deane isn't a runner, and doesn't understand the drive to push yourself and see how far and fast you can go.

Perhaps I should have listened. Damn it all, he was right. I had a rest day on Monday, then headed out for another run on Tuesday, clocking a fairly decent 7.5km at a 6'07" average pace. By the end of it, my left knee was shot. I made a rookie mistake, and increased my distance too quickly (because I'm impatient.  Gah!!). Now I'm suffering the consequences. I have 'runner's knee'. Perhaps if I'd waited another day or two after the long run, it would have been okay. Or maybe the damage had already been done. Either way, I am now having to wait until things improve before I can head out again. I have to constantly remind myself not to rush it. At the moment, I'm looking at not getting out again until next week, possibly later depending on how it feels. I'm a little gutted, but it's my own fault, so I can't complain too loudly :-(

On the plus side, I've had a little more time to knit (and no time to study - reason explained below), and managed to finish my hitchhiker scarf: 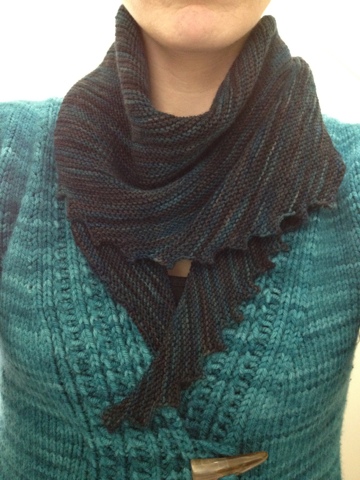 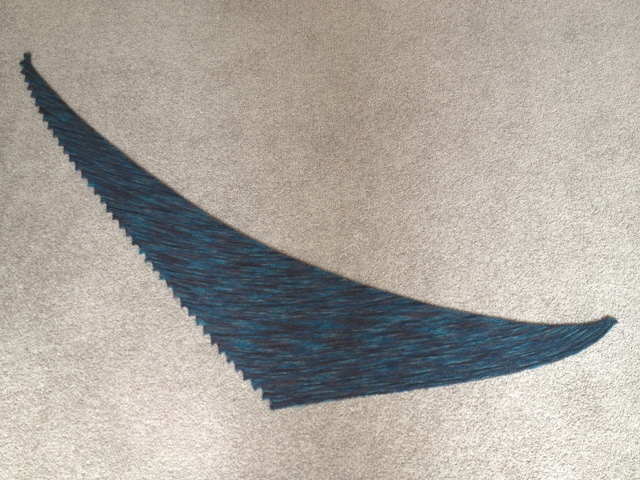 Knit with Wollmeise Sockenwolle 80/20 in 'Nicole' that I won in this year's Sock Madness. I got the requisite 42 teeth and had plenty of yarn to spare, so I was probably a little too conservative going with the 2.75mm needle, but I'm happy with the result, and it's better to have too much yarn than not enough!

I cast on yesterday for a Godric's Hollow hat with the skein of Malabrigo Rios 'Teal Feather' left over from my Zephyr cardigan. Once that's finished (which will hopefully be tonight), I'll be casting on the Rock Island shawl!!! I've had the yarn set aside for this: 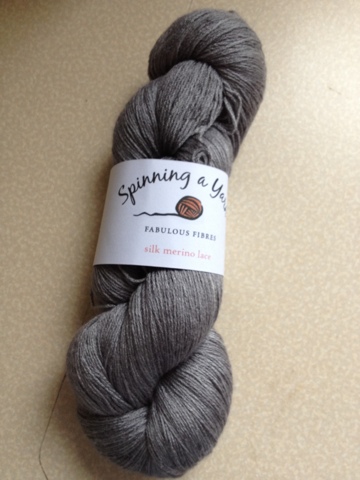 ('smoke and mirrors' merino silk lace weight from Spinning a Yarn), since last year's KAN. Our Sunday knitting group is doing a little lace shawl knit-along, the perfect excuse to get stuck into it if you ask me :-) Plus, our resident lace shawl expert Zoe will be knitting one too, so if I get stuck she'll know exactly how to help.

I've got some company here at home at the moment (which is why I can't study) - T woke up yesterday with a giant swollen cheek. As far as we can tell he has an infection of some description, but as he's being very close-mouthed (won't tell us anything, AND won't let anyone have a look, doctor included) he's been put on a round of antibiotics, with some kiddie painkillers if/when required. He's been home for two days now, and other than a lopsided face is a box of birds. I'm hoping he'll look better tomorrow so I can send him to school. I have two appointments to attend and can't take him with me. Plus, it's school photo day. Now that could be interesting...
Posted by kreachr at 15:40