I've rested my knee for nearly a week now.  I plan to head out on some _very flat_ streets for a short 5km on Tuesday to test things out and see how they go.  Even though I have no intentions of doing the half marathon any time soon, I'll be following this plan (scroll down to see the 'ten week schedule' I'm aiming for) - this would put the quarter marathon at about week seven, so I'll have to rejig that week a little (or possibly do two runs on race day, depending on how it goes.  Oh God, I'm starting to sound crazy.  Must get out for a run soon).  Every non-running day I'll be doing my runner's-knee-specific stretches, which are designed to strengthen the muscles supporting the knees, in the hopes of improving their current state, and possibly preventing a recurrence.  Fingers crossed!

I spoke to my physio on Friday about all things runner's knee.  Basically I bombarded him with questions, and we came to these conclusions:

Shoes: current ones are fine (both pairs), as I have normal pronation.  No need to rush out and buy specialist shoes/orthotics.
Knee brace: pretty much pointless, as it is not the knees that are the problem (although that is where the pain lies, it is the surrounding muscles that need the work)
Compression tights: more of a 'psychological' benefit rather than a physical one.  My thoughts - I'll still wear them, they make my butt look good ;-)
Stretching: MUST START DOING THIS REGULARLY!!!  To date I have not done any, either before or after a run.  Or even in between.  Note to self: you are getting older, and things don't work as well as they used to.  Nor do they recover as quickly from a hammering.  Look after yourself better!
Running: Go for it, when it feels right.  But for now, stick to flat surfaces - no hills or stairs, and start with short distances.  DO NOT INCREASE YOUR DISTANCE MORE THAN 10% PER WEEK!

Meanwhile though, it's been a busy/slow week.  You know those weeks where you're seemingly on-the-go all the time, but hardly anything actually gets done?  Yeah, I had one of those.  With T sick half the week, I didn't start my assignment as planned.  That'll have to be next week now.  Saturday saw Deane and I sitting in the back of a friend's car on the way up north to look at a boat.  For the friends.  I have no interest in boats.  But it gave me plenty of time to knit, so no complaints here.  And it gave us a good five hours or so away from the boys, which can be nice every now and then.  I love them dearly, but the noise levels can grate on the nerves somewhat.

As for knitting, I got this much done: 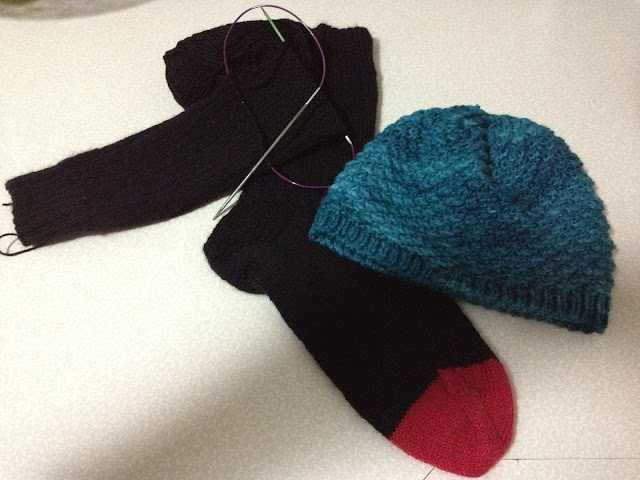 One Godric's Hollow hat in Malabrigo Rios 'Teal Feather'. And one and a half Dad Socks, knit in Waikiwi.  I bought the yarn from The Little Craft Store, which, sadly, is closing down (although I believe she'll be keeping her store online, but mostly fabrics).  I only had two balls of the black, and didn't want to wait until next week to go buy more, so decided that some nice red contrast toes would look rather spiffing ;-)  I should be able to finish the heel turn tonight, and the foot in the next day or two.  Yes, I already knit a pair of these for Deane, but the pattern is so super simple I have it memorised, and the fit is so good and man-ish that I decided another pair was in order.

As for the hat, it's supposed to be slouchy, but I'm undecided as to whether I should block it, or just leave it as a beanie: 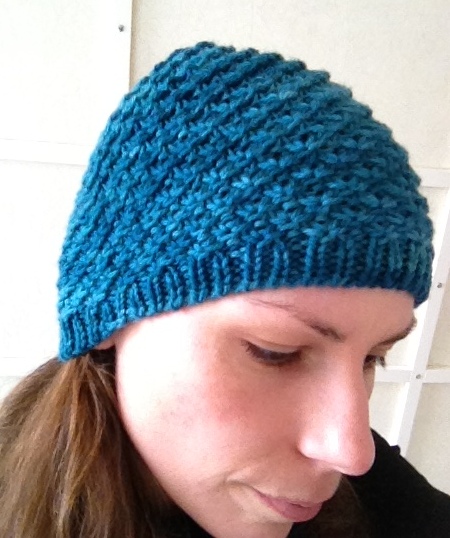 Opinions?  On the hat I mean, not the horrendous photo (wow, my nose looks big!).  For the record, one still maintains that it is near impossible to take a decent photo of oneself.  Particularly when trying to capture an image of one's hat.  Or both hands.  Or the outside ankles.  Maybe one should knit different stuff.  Or find a model...

Have a good week people, enjoy the Spring!!!
Posted by kreachr at 19:58