I got up at 5am yesterday morning specifically to make some breakfast buns - I'd seen the recipe in one of my foodie mags and had been wanting to try it for a while.  I spent a good half hour trying to get the yeast to foam, and it just wouldn't work.  I came to the conclusion that it was 'dead', and waited patiently (while knitting Deane's man-sock) until 7am when the supermarket opened.  I bought new yeast, came home, and tried again another several times to no avail.  Eventually, I gave up and made cinnamon waffles with berry compote, greek yoghurt (for Deane) and whipped cream instead.  Deane, in all his baking wisdom, managed to get the yeast to do its thing, so I started the dough, and then we headed out to the Waitakere Ranges.  Unfortunately I didn't get to go for a run, but it was a circular route of a sort, and we as a family enjoyed a leisurely stroll and picnic lunch while taking in the scenery and local birdlife.  X and I had quite a laugh about his 'photo theme' during the walk: 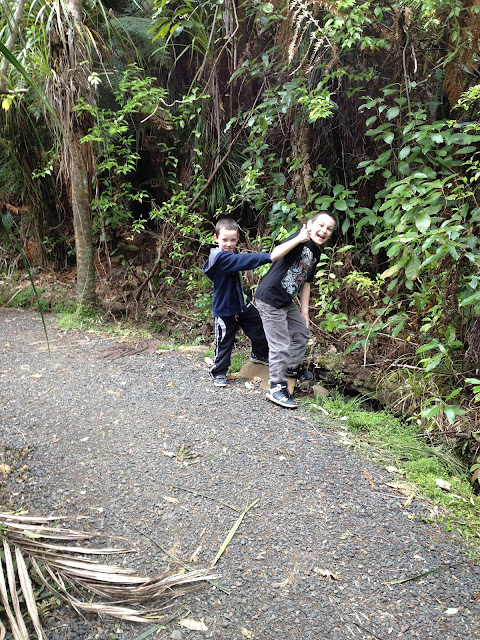 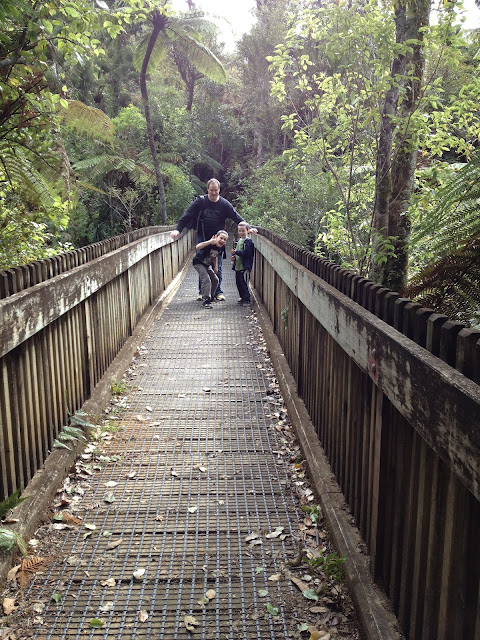 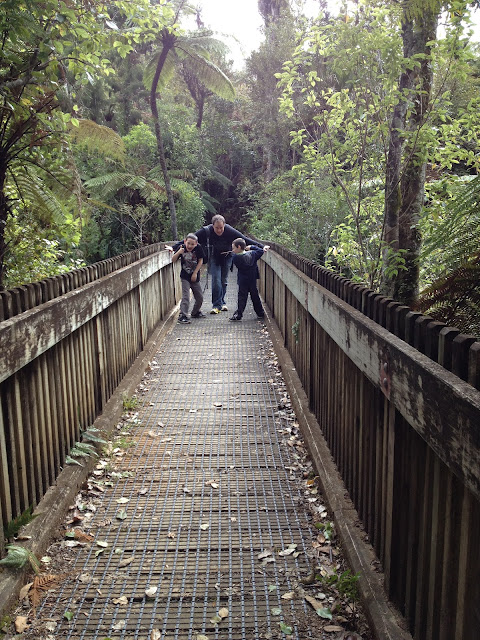 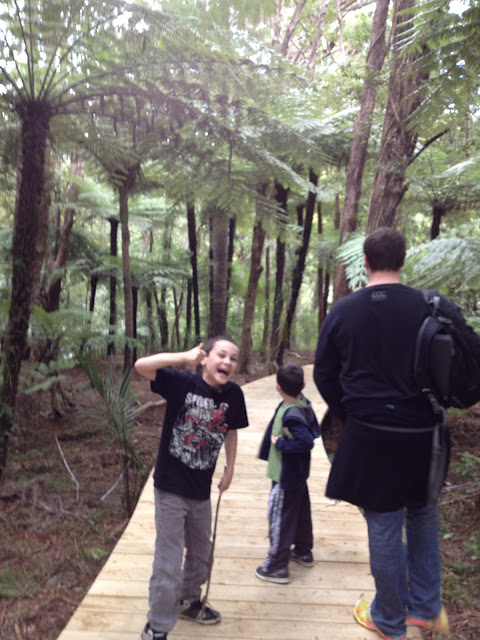 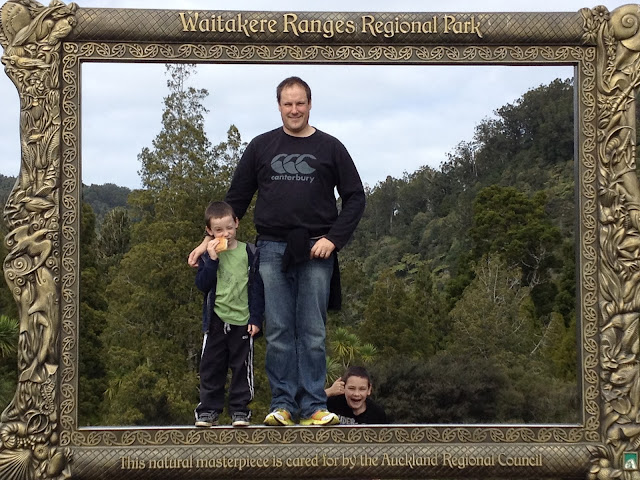 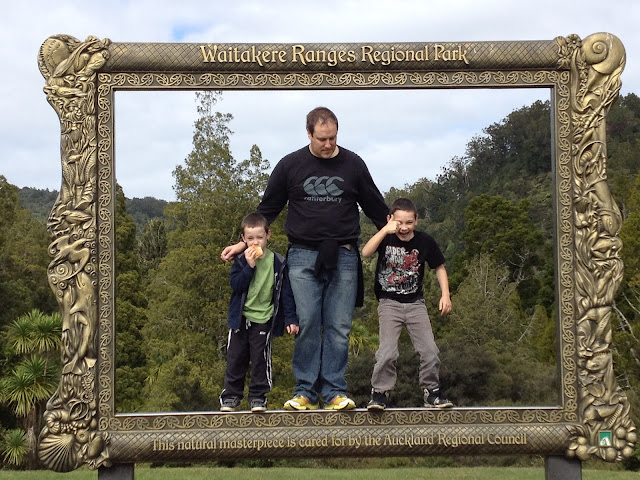 We were cracking up the whole way around!  I did manage to get a few scenery shots as well though, sans child-comedian: 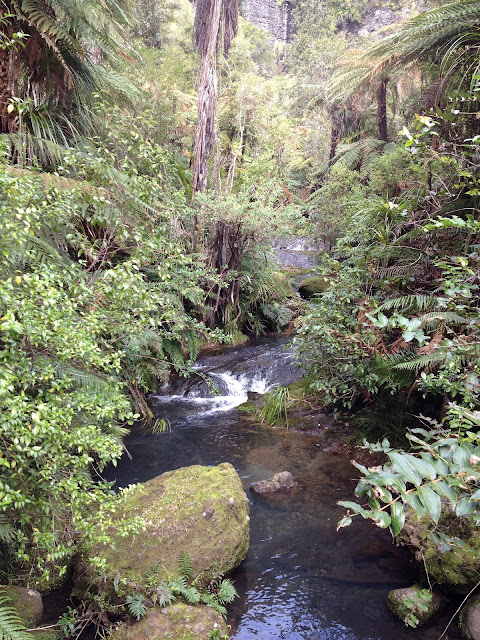 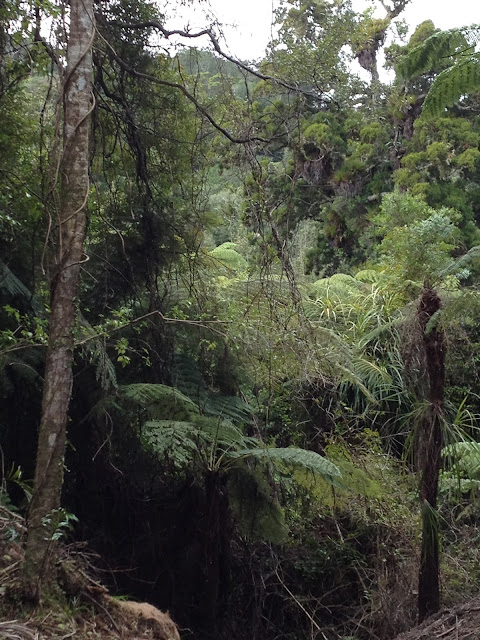 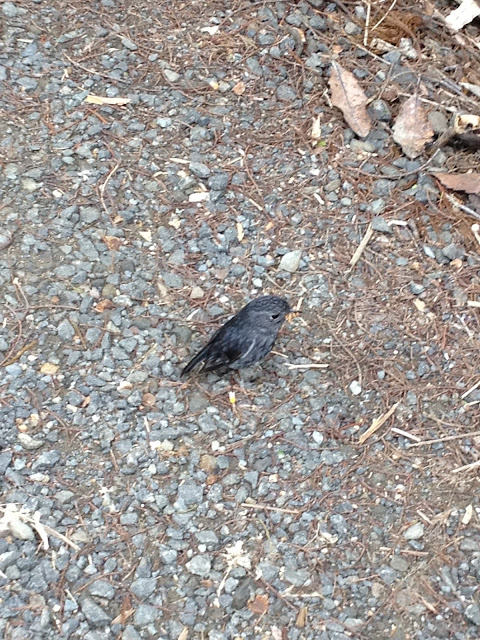 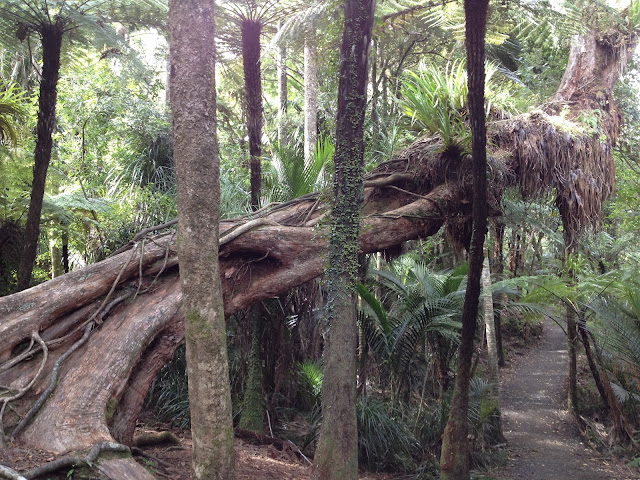 The track we walked was a one hour loop - perhaps I'll get to run it next time...

On our way home, we stopped by Transylvania and had a round of black light mini golf - an interesting experience.  Upon arriving home I was very pleased to discover that the dough had risen well, and continued making the buns, which we ended up having for afternoon tea.  Deane made the comment that he was glad the yeast wouldn't foam in the morning, as he had much preferred the cinnamon waffles.  There's that silver lining ;-)

This morning, after the disappointment of not being able to go for my first trail run, and because I'm really impatient when I've set my mind on something, I decided to bring next week's planned long run forward.  Up at 5am again, this time I hit the streets.  I was aiming for my longest run yet - 16km.  Well, guess what?  NAILED IT!!  And some!  Ended up clocking a full 20km.  I was so pleased with myself :-)  My knees are a little sore, but other than that, it was pretty awesome.  But because I'd planned on 16km, my turn around point was a little... early.  So I ended up having to run a few circles in the Wynyard Quarter/Viaduct Harbour area to stretch it out a bit: 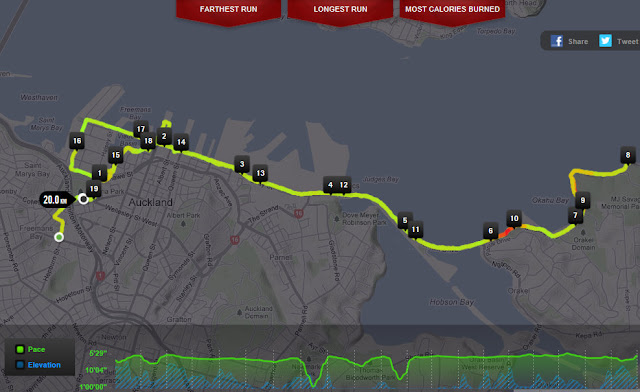 Being that it was a two hour run, I had my headband thing on for nearly three hours - straight after my run I went to the supermarket to pick up some bits and pieces, made the kids breakfast, then cooked Deane a Father's Day breakfast (black pudding (eww!), bacon, mushrooms with garlic butter, and poached eggs on seed and grain toast).  It's a fairly tight headband, but I wore it to prevent myself getting earache.  Unfortunately, it made an indentation in my forehead.  This line it created stayed there all day.  It wasn't until recently (about 7pm) that it had fully disappeared.  Needless to say, I won't be wearing it again!  Luckily it was only $10.  From now on I'll stick to beanies I think. 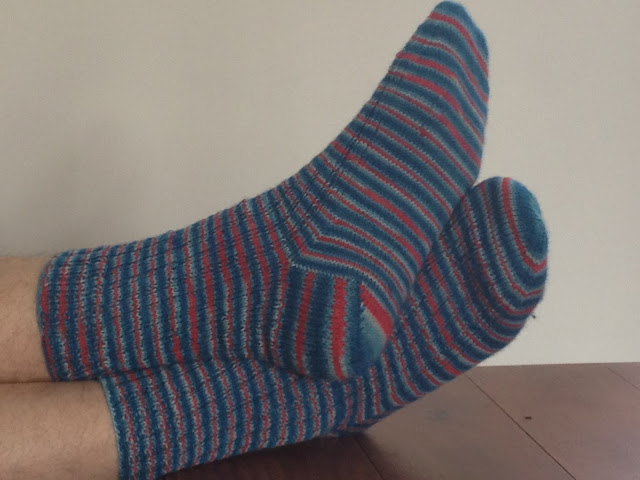 Deane's expert modelling skills coming in to play here ;-)
So this meant I could knit more on my Hitchhiker scarf today at knitting.  I'm all for mindless patterns when at knitting group, because I talk too much and get lost otherwise.  On my walk home, I was very happy to spy a tui in the kowhai tree at the boys' school.  Having just read KiwiPurler's blog post about tui and kaka in kowhai trees, it was nice to have my own little encounter.  The tui population is one of the things I miss most about Wellington.
All in all, it's been quite a busy week.﻿  Tomorrow, I have housework and study planned.  Not nearly as exciting, but important all the same.  I hope you had a good week too :-)
﻿
Posted by kreachr at 21:25