Hallelujah!!!  The kids went back to school this morning.  What a relief!  Time to myself again, to go to the supermarket, walk into town, run errands, study, do the housework, or even just to sit in peace and quiet and knit.  Oh, the blessed quiet.  It's the little things in life...

Last week was a busy one - Monday saw us driving down to Napier.  It was a leisurely six hour drive with a couple of stops on the way.  Tuesday morning I managed a short but successful 3km run.  No pain, no niggles, nothing.  It was awesome, and I was ridiculously happy.  It was a lovely sunny day in the bay, and we went out for lunch.  The kids had a bit of a play around on the beach while waiting for the food to arrive: 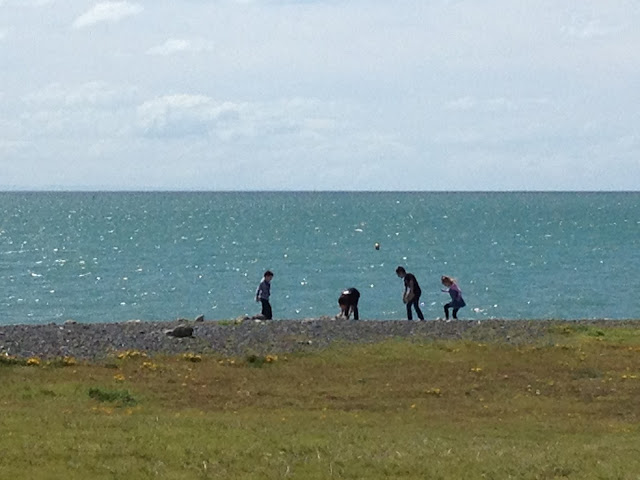 Wednesday was spent running errands, visiting friends and family, and hanging out with the cousins, which is pretty standard for our Hawkes Bay visits.  Thursday was a lovely day as well.  We headed up to Te Mata Peak and went for a bush walk, and X was being his usual daggy self: 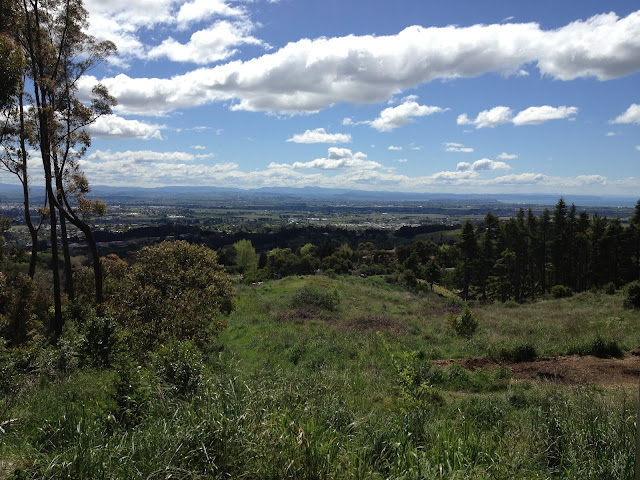 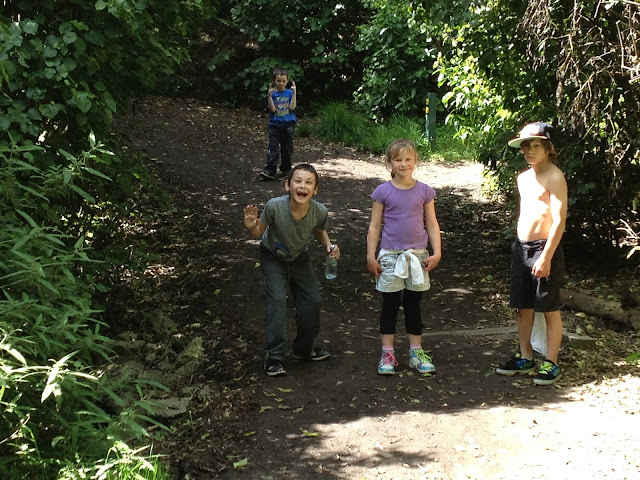 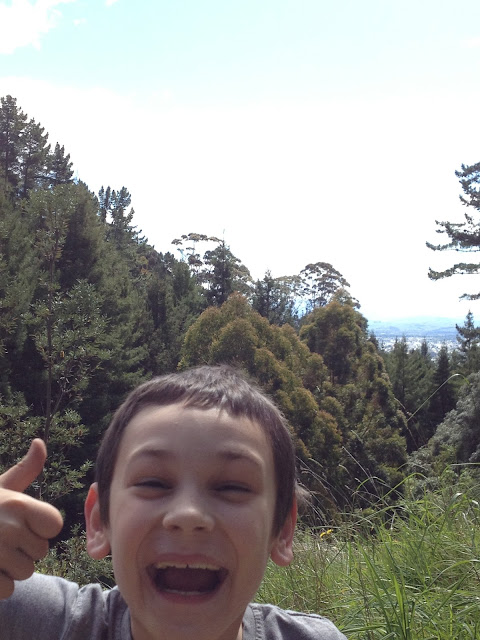 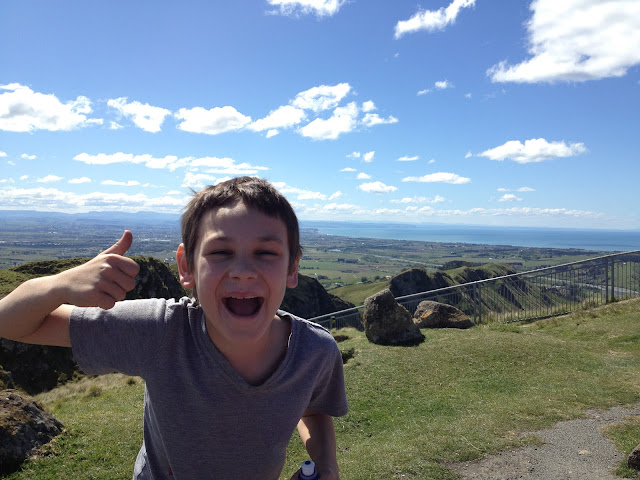 We went up to the Peak and checked out the gorgeous views: 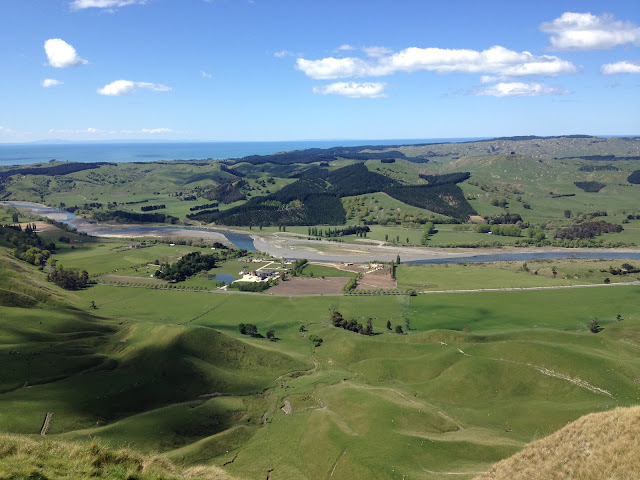 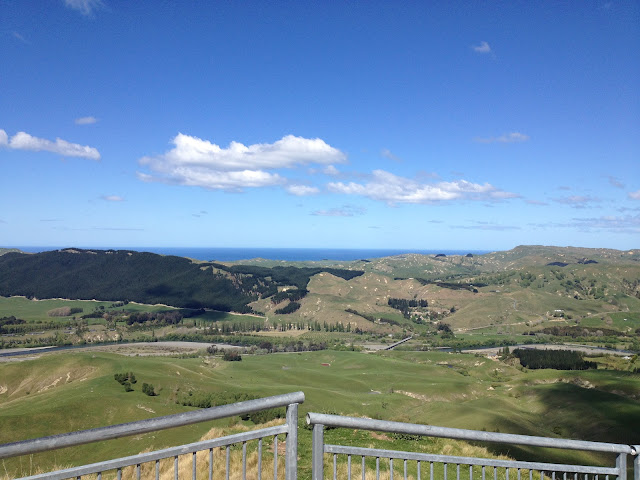 Rather stunning, don't you think?  Such a lovely country we live in.  That evening, everyone called around to my parents' house for a barbecue, to celebrate my 33rd birthday.  A good time was had by all, and it gave the kids the excuse to stay up ridiculously late.  My sister gave me the most hilarious (and appropriate) birthday card: 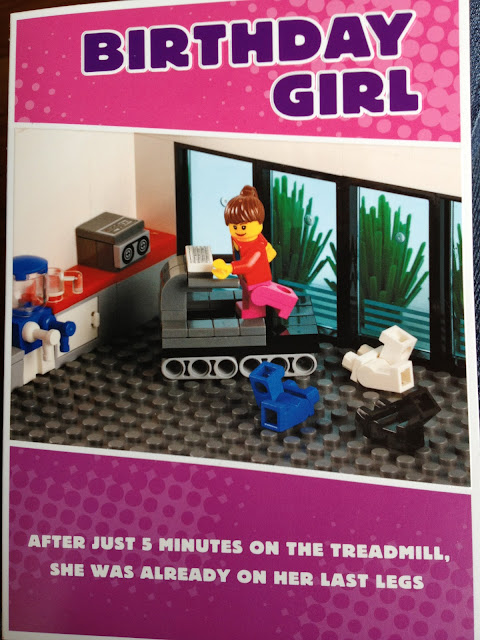 On the back it said 'next time I'll just run around the block'.  Haha :D

Friday, I headed out for another run.  I intended to go for a 5km, but the knee was feeling a little niggly, so I erred on the side of caution and cut it down to 4km.  That night we went to my MIL's place, and enjoyed a fantastic roast lamb dinner. Oh, how I love roast lamb!  It think it may be my most favourite meal.  Absolutely divine.

Saturday was the usual last-time visits with all and sundry, then we hit the road early afternoon to head back home.  Unfortunately, the weather had turned rather nasty, and we had to endure gale-force winds and driving rain while travelling the Napier/Taupo road.  Not terribly pleasant, but we managed to get through it all the same.

While in Napier, I didn't get any study done at all (no surprise really), but I got plenty of knitting done.  I finished the Elementary Watson socks I had been working on: 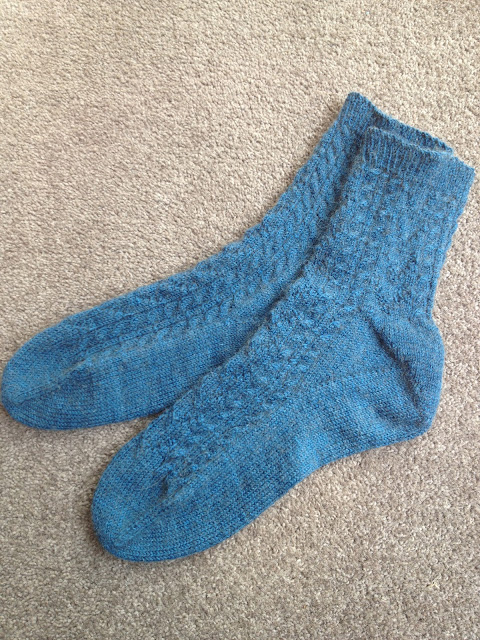 I had cut it pretty close with the first sock, with only a couple of metres of yarn left from the first ball.  With the second sock, I entered into a game of 'yarn chicken' while working on the ribbing.  Unfortunately, the yarn won, and I only had enough for ten rows of ribbing.  Which meant I had to undo the bind off on the first sock and frog back a couple of rows so they would match.  If I had a little more yarn, I'd have knit another repeat or two on the leg, however I'm happy with the overall result.  The pattern was easily memorised, the heel much the same, and I could quite easily (and probably will) knit the pattern again.  I hope the intended recipient likes them too - they'll be posted tomorrow, and should be handed to him this weekend.

I also cast on and knit most of the Peacock Shawlette while in Napier, and ended up binding it off on Saturday night after arriving home, which meant I could block it Sunday morning.  I'm rather pleased with the result, and the colour is beautiful: 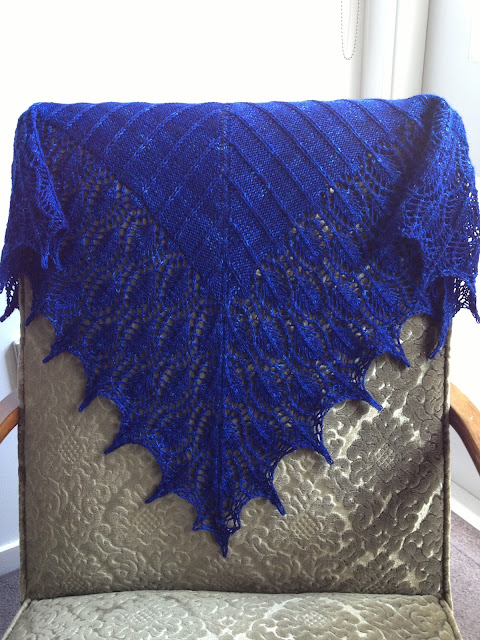 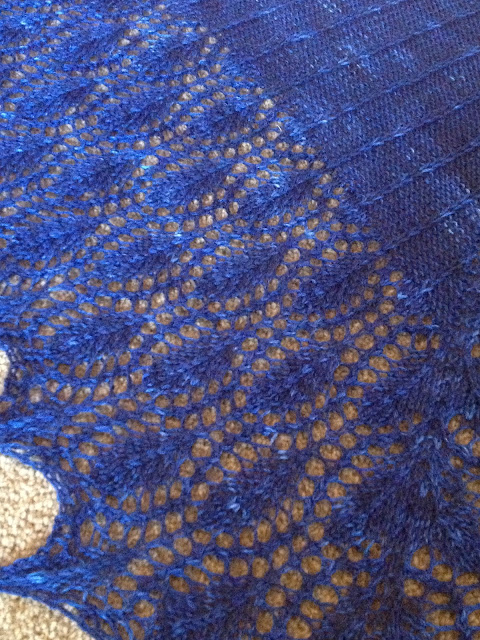 I'm rather glad I frogged the socks now ;-)

I had managed to finish the butt-cover and beanie before we left as well, and the wee boy's mum was very happy with them: 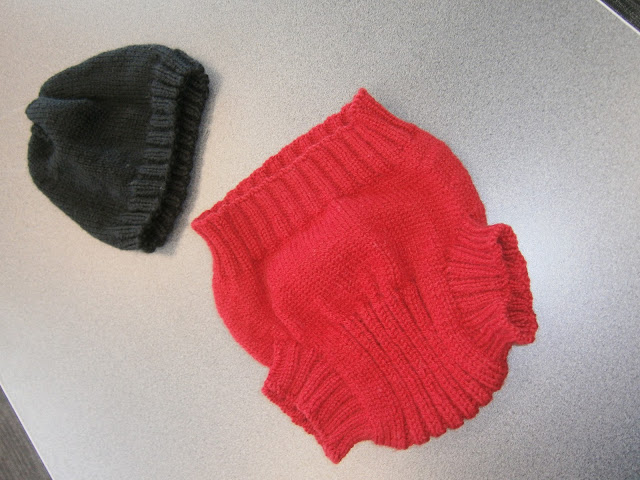 Which meant that as soon as the shawl was off the needles, I could cast on for an 'instant gratification' project (because a shawl in a week just doesn't cut the mustard, apparently...).  I cast on a kindle cover while at knitting on Sunday, and finished the last five rows and grafting when I got home, bringing the total time for the project to three and a half hours: 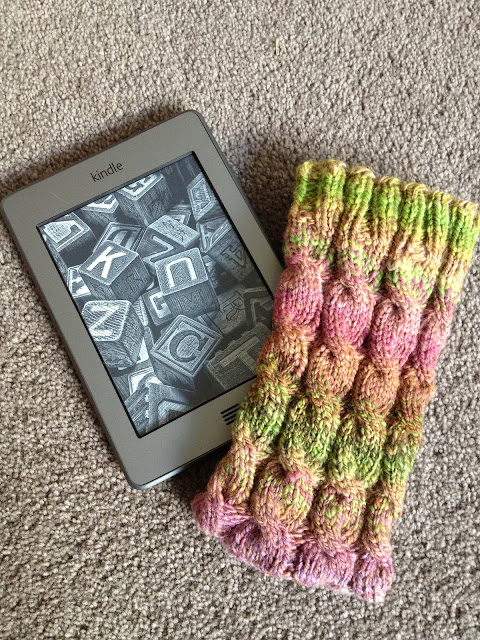 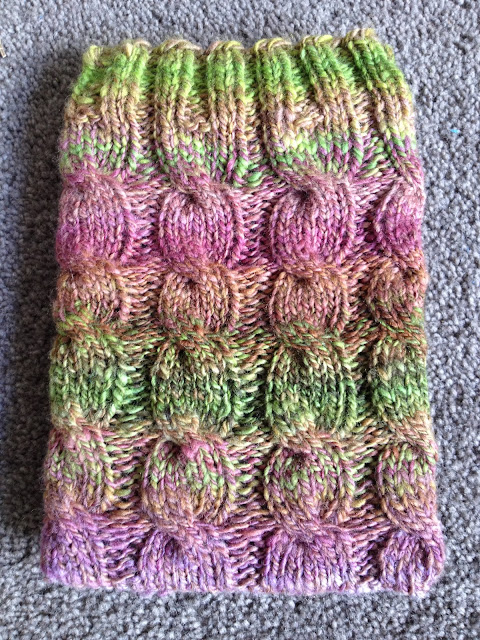 I knit this using some leftover handspun I had lying around.  And the cool thing is that it fits both my kindle and Deane's, which came in handy this morning when I was heading out the door and couldn't find my cover.

Suddenly finding myself yet again without a project on the needles (the stole doesn't count, I am studiously ignoring it at the moment), I cast on this hat (in the larger, floppy size.  Because it looks awesome).  Great Southern Yarns is having a LOFT/Shelter craft-along, and the pattern was generously gifted to me just so I could (or rather, would) participate.  So, armed with my recently-purchased-specifically-for-the-craft-along skein of LOFT in 'Sweatshirt', I cast on.  So far I've managed ten rows of ribbing.  No hurry, the -along goes until the end of November.  I may stray a little, and cast on these socks...