If at first you don't succeed, try, try again

That is my motto for the week. I headed out for a run on Wednesday morning, and only managed 500 metres before having to stop and walk home. I was very disappointed and sulked the rest of the day.

I had another appointment with the physio on Friday and I was running late (washing and drying such long hair takes time you know). I had to run/walk to get there in time, and it seemed to be okay, including running up a hill. After some discussion and assessment, we decided to axe the swimming for now (since that hurts my knee and may be delaying recovery), go back on anti-inflammatories, more rest, more strengthening exercises, and give it another go next Tuesday. I am quietly optimistic. I won't go so far as to say excited, as this has proved a bit of a jinx thus far.

I went a little crazy yesterday though, and signed up for the North Shore half marathon next September. That's nearly a year away. Plenty of time to train for it, right? I wonder if there's enough of a gap between 1st September and 27th October for recovery time? I wanted to do the Auckland half marathon too. Hmm, personal challenge. I like those :-)

The kids and I have managed a couple of outings this week, despite the on/off rain that seems to be a constant in Auckland (I really don't like the weather here much). On Thursday we went to see Madagascar 3, which was of course hilarious, and yesterday spent a couple of hours at MOTAT, where we cooked damper over an open fire, dug for kauri gum, went gold mining, and made butter by hand. The kids really enjoyed themselves, and absolutely devoured the damper with fresh butter they'd made themselves. Well, mostly. Skinny little kid arms get tired of all the effort required to shake cream long enough to produce butter. So of course mum had to step in and finish the job. Mum also had to finish cooking the damper when the fire got too hot. Still, it was a fun experience for them. T wanted to make more bread when we got home so I found a recipe for oven damper (basically just a large scone), and they had some with more of their butter for an after-dinner treat. I must say, it was rather yummy.

As was my lunch yesterday. I've been trying to help Deane lose a bit of weight by making a salad and sending it off to work with him every morning. But plain old lettuce salad gets boring, so I've been trying out different stuff, and its absolutely amazing how much variation there is in the world of salads. Yum!!! I look forward to trying out more in the coming weeks! Can't guarantee Deane will lose any weight though...

I received my assignment results yesterday, and was pleasantly surprised to discover I had done quite well, achieving 82%! That's two As so far for this paper. The last assignment is due late October (right before the quarter marathon), so at least I'll have some time to get it done after the kids go back to school, because I've only managed a couple hours study while they've been home. I didn't expect much.

I have had time to knit though, and have finished the vanilla soakers: 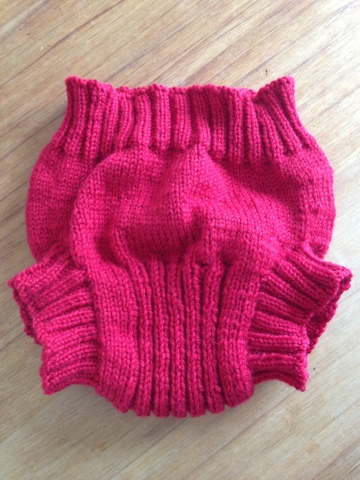 Don't they look ridiculously funny? Imagine them on a baby butt - that might help. These were knit with Skeinz Urban DK yarn, and I used about 1.5 balls for the medium size. I omitted a few rows on the leg bands because I figured they were long enough. Next up, a plain black beanie, which will be knit in the same yarn. But black. Obviously.

I have also knit one sock of a pair: 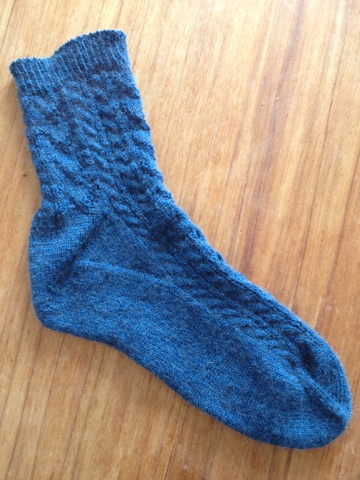 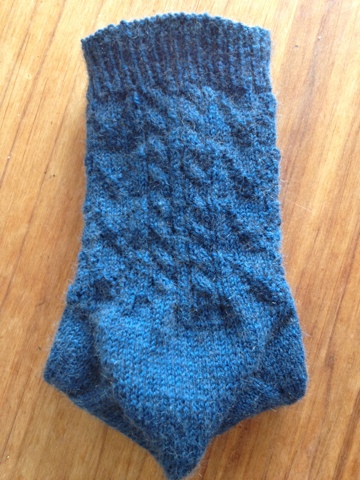 These are the Elementary Watson socks, the pattern for which is inspired by an Aran sweater worn by Doctor Watson in the TV series Sherlock (which btw is awesome). I started knitting the first sock while watching the first episode of Elementary (another Sherlock program, gosh there are a few...). I thought that was kinda funny, in a nerdy sort of way. And did I mention they're for somebody with the surname Watson? Yep, I'm a dork. I love the pattern - it's really easy to memorise, which of course makes the knitting go faster. And it has cables. Y'all know I'm a fan of cables :-) The yarn - Waikiwi (possum/alpaca/merino/nylon) - is not the best choice to show the stitch definition, but oh, do I love that colour! This is my first fleegle heel too. I quite like the construction but must admit the short rows feel like they go on f-o-r-e-v-e-r... I tried the sock on Deane's foot, and it fits nicely. I may end up knitting more.

Hmm, seems my little rule of never knitting the same pattern twice is falling by the wayside a bit, huh? Oh well, I don't think the knitting police will be knocking on my door anytime soon. If I start knitting hideous shawls in furry feathered novelty yarn, however...

I'm itching to cast on another shawl (or maybe this one), but think I'll knock out the baby beanie first. Methinks the shawl should be well and truly started by Monday ;-)

Enjoy your weekend! I hope it brings you some sunshine.