The long weekend is drawing to a close.  Half the children are in bed, and the other half is heading there very shortly.  Unlike Hawke's Bay (who had a four day weekend, or in the case of my niece and nephew a five day weekend due to a teacher only day on Thursday) ours was like most - a three day weekend.

Saturday morning (after a breakfast of bacon, poached eggs and yogurt rolls) was spent with friends at Crafternoon Tea, then we headed to Armageddon where I caught up with Deane and the boys.  We spent the entire afternoon right throught until 5pm absorbing all the nerdiness we could possibly fit in.  I was especially pleased to see several girls in TARDIS dresses, and the cutest little guy wearing an eleventh doctor costume.  It was adorable!!!  And we got sucked into the vortex surrounding the United Sweets stand.  We couldn't escape without grabbing some American goodies - I was overjoyed to discover they had graham crackers, and just HAD to buy some.  I've been missing these since we ran out earlier in the year.  One of the things I actually liked about America...  We also got Twizzlers, PopTarts (various flavours), PB&J (surprisingly good), Twinkies, and a few other bits and pieces.  All I wanted was the graham crackers, but whatever.  They're opening a store in the Sylvia Park mall soon, so hopefully I'll have a ready supply of graham crackers to hand in the near future.  I'm thinking of contacting them to see if they can import Deane's favourite sauce.

There were many neat costumes, many crazy costumes, and a whole huge lot of people.  It was a fun day, the boys enjoyed it and got to play some of the new and soon-to-be-released XBox games.

Sunday absolutely bucketed down almost non-stop all day, so we cosied up inside for the day.  I made pancakes for breakfast with cornmeal and oats (found the recipe in the latest Runner's World magazine).  I was expecting the kids to complain, but they happily devoured them without a peep.  T had two, which I wasn't expecting, they were quite filling.  I only managed two myself!  I spent a large part of the day knitting a stranded argyle knee-high sock (more on this later), but did stop to cook dinner.

This morning, thankfully, the weather had cleared and I headed out for a run.  I took my headphones with me - something I haven't done in a while - and ran around the viaduct area, which is pretty standard when I'm running a short distance.  What I didn't realise was that the triathlon world champs were still going on.  I ended up running alongside the triathletes competing in the running leg of their race (although outside of the actual track the athletes were running in).  I had to cross the course at one point, in between runners.  The combination of fast-paced music and inspirational international athletes spurred me on to run my fastest 5km to date - 26:31, with an average pace of 5'17" per km.  Excuse my lack of modesty, but I was impressed! ;-)  The rest of the day was spent (unsurprisingly), cooking (mmm, yummy lunch!), eating, knitting and cleaning (not much of the latter to be honest, but it still counts).  I managed to finish one of the knee-highs: 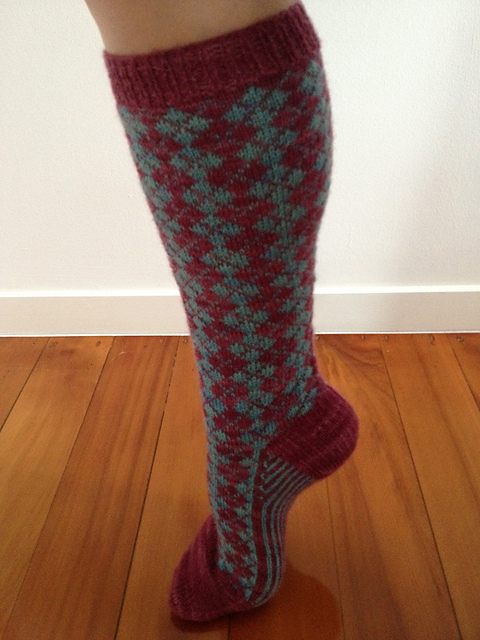 Awesome, huh?  The pattern is Neptune High, and it's knit with Happy Go Knitty BFL sock yarn.  I'm looking forward to wearing them, when I manage to get the other one knit (which will have to wait until I've finished the 2,000 word essay I have to write by Friday!!!)

I plan on heading out for another 5km run on Thursday, albeit much slower, as the quarter marathon is this Sunday.  I do not expect to break any records, or even beat my time of last year for that matter, but I do believe my knee is strong enough to manage the full 10.55km race.  I ran a 7km last Friday (as per the physio's instructions) and although my knee felt a little niggly towards the end, I managed it okay, and there were no lasting effects.  So fingers crossed!!!  I've signed up to have my real-time progress updated on a live feed on Facebook, so if you happen to be up at 6.45am next Sunday (unlikely, I know) feel free to check out my timeline to see how I'm getting on :-)

Otherwise, I'll let you know next week.  Until then, have a good one!
Posted by kreachr at 21:31