I'm sitting here in semi-darkness in the middle of the day, with rain absolutely pelting down outside.  Thunder and lightning, reports of a tornado somewhere in West Auckland... isn't it supposed to be summer?

This is much along the lines of what happened last summer here as well.  Last summer was utter shite, if you don't mind me saying.  I really hope this year's doesn't pan out the same, or I'll be really pissed.  The climate in Auckland is definitely not to my liking.  I think I've said this before.  Of course, I happen to like rain, particularly (IN WINTER!!) when I'm cosied up inside with a book or some knitting (or in the case of today, a particularly difficult assignment).  But c'mon, a girl needs a bit of sunshine to go with the god-awful humidity, am I right?!?

I went out for a short 5km run yesterday morning at 6am thinking I'd beat the heat.  No such luck.  Normally a 5km barely breaks a sweat these days, but when you throw 17°+ temperatures and eleventy-billion percent humidity into the equation, you get a horrible sticky, sweaty mess.  The kind of sweaty you get after a 10-12km run.  Not good at that time of the morning :-/

Anyway, enough whining about things we cannot change, and onto more awesome stuff.  I am officially past the half-way point in my Christmas knitting, yay!!!  Still no pics, so as not to ruin the surprises, but lemme tell ya, I'm happy to be on the home stretch!  With only 18 sleeps to go (OMG!!!), the more I can get knit now, the less I'll be stressing in the last couple of days before the 25th.  I'm absolutely itching to get back into the kitchen to make more yummy goodies too, but I have to be good and wait until closer to the day.  We don't want to be giving out weeks-old cookies now, do we?  No, definitely not.

The boys' birthdays are done and dusted for another year (eight and ten.  Gosh, when did they get so big?) and they're enjoying the daily ritual of opening the advent calendar to see which chocolate they got, comparing similarities and differences between the two calendars.  We've been a bit slack in dragging out the tree and decorations this year, but there's no hurry.  Perhaps a job for this weekend?  I have sorted out my dinner meals for the next two weeks, which takes us up to the 23rd, by which time we'll likely be heading to Napier for the annual Christmas holiday.  I'm looking forward to the big two-weekly grocery shop this weekend.  Yes, I'm one of those weirdos who actually enjoys going to the supermarket, the butcher, the green grocer... as long as I'm by myself of course.  Throw a husband and kids in the mix, and it's my worst nightmare.  Well, one of them anyway.  I have many.

I'm very glad to have finished a rather tricky assignment that I've been working on for the last TWO WEEKS (OMG, and this is supposed to be a Level 5 paper?!?!?) - I submitted it not half an hour ago, and have proclaimed the rest of today as knitting time (and exercises - more on this later).  Deane has been informed that I am not cooking dinner this evening, and he's okay with that.  I've been sticking to my meal plans and cooked everything I said I would in the last two weeks, but because Deane has been coming home from work late most nights, he's been either eating his for breakfast the next morning (because he's weird like that) or I've had it for lunch.  He's going to be late again tonight, so I'm having leftovers for dinner, the kids are having noodle omelettes (something my bff's mother made me once when I was a teenager, and I have loved ever since) and Deane can have whatever he's having wherever he's going to be.  Sweet as.

I'll continue the rest of my study on this paper... perhaps next week.  We'll leave tomorrow open for a long run, a leisurely shower, and some more Christmas knitting.  Maybe I'll do the grocery/butchery shopping tomorrow, and just go to the green grocer on the weekend...  Ah, planning flexibility :-)

Now, I must share the latest time-suck I have fallen prey to.  Many of you will already be aware of/joined up to Pinterest.  As usual, I was a little slow to the party.  To be honest, I knew it was a time-suck and thought it best I avoid it.  But after having listened to many friends' proclamations about how awesome it is, I decided to have a wee nosey, and oh boy, is it awesome?!  I totally get it!  But yes, time just seems to fall into the great black hole that is Pinterest and an hour goes by before you know it.  One must be vigilant, and remember the way back out.  Having said that, I have barely scratched the surface of all that is Pinterest, but am enjoying trying out lots of new recipes and ideas I've found so far.  One such idea has been to write a bunch of different exercises onto ice block sticks and pop them in a cup on the bench.  Whenever you happen to be standing around (say, when you're making a cup of tea, cooking dinner, whatever) you grab a stick, do the exercise on it, and before you know it, you're buff!  Haha, just kidding ;-)  But wouldn't that be nice?  Here are my exercises: 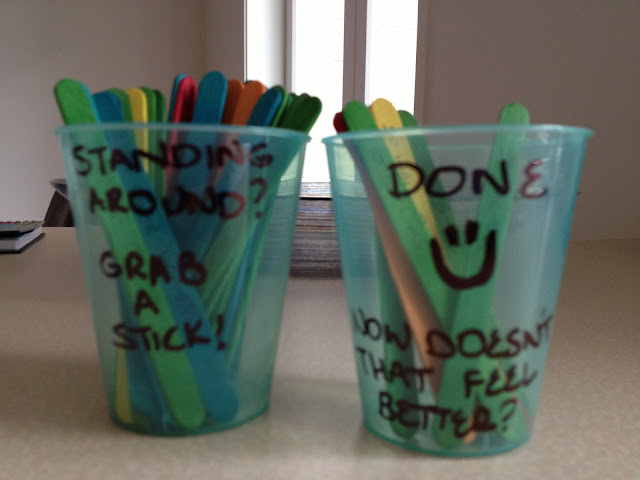 There's a total of 36 different exercises in them there cups, working every area - arms, calves, thighs, butt, and of course abs.  Maybe a little bit OTT, but whatever.   I managed to do all of them on Monday and yesterday, and most of them on Tuesday (but I figured I could get away with missing a few, since I ran 10km.  With hills).  I've only done eight so far today, but there's still plenty of today left, so I should be able to squeeze in quite a few more, if not do them all.  Gotta leave some knitting time though ;-)  The kids are strangely interested in these exercise sticks - if they're around whenever I grab one, they ask which one it is.  If it's an exercise they haven't seen or heard of before, they want to know what it is, how it's done, if it's really hard etc etc.  Kinda funny really.  Maybe I should encourage them to join in...?  Nah, they'd never fall for that...  (Tried getting X to run the kids marathon this year (2km) and nearly got him interested.  I think he was seriously considering it.  By the next day though, he'd changed his mind and decided against it.  Oh well, maybe next year.  I'll start working on him earlier, maybe take him out for a run around Victoria Park...)

There are many other awesome things on Pinterest - I've already mentioned all the recipes (there. are. so. many!!!), there's also umpteen-million outfit ideas, motivational quotes, funny quotes, videos, pictures, links to blogs, gorgeous landscape pictures from all around the world (very inspiring, I want to travel EVERYWHERE), cute pictures of animals, babies, anything and everything (great for when you need a little cheer-up), and so many fabulous gift ideas, which of course is perfect for this time of year.  If you're a little stuck, there are excellent hand-made gift ideas, many of which are really budget-friendly.  I may have added a couple extra ideas to my Christmas gifts list this year because I just couldn't resist (but not too many, because I already had that pretty much covered), and I've pinned a few more for Christmas next year, or birthdays, or whatever occasion happens to fit the gift or vice versa.  Did I mention how much of a time-suck Pinterest is?  I did?  Oh...

Well, the boys will be home from school in half an hour, and I have a date with a hot cup of tea and some Christmas knitting.  Be good, enjoy the rest of your week, and look after yourself :-)  See you next time!
Posted by kreachr at 14:36