kreachr and the neverending assignment

I swear I've spent twice as long on this assignment than the 'minimum hours' already.  According to the study plan, it should take a minimum of 15.  So far it feels like about 30.  I spent days building the database for the first task.  I just spent the last two nights in a row creating a PowerPoint presentation and writing the accompanying speech for the second task - last night I crawled into bed at 1am, very glad that I had managed to get it done.  Now I have to write a report on the systems development life cycle of an e-commerce website or a client server network for the third and final task.  Wow.  This is definitely more Deane's department.  However, I think I'm doing pretty well, and I'm nearly finished.  There's still over a week before we leave for Canada, so there's plenty of time left.  With Deane currently in Sydney I'm able to turn off the TV once the kids have gone to bed and get stuck in.  Of course, now that X goes to bed at 8.30pm that's a pretty late start for study in my opinion (hence the 1am bedtime), but it's better than trying to do it during the day while they're making noise and asking questions relentlessly.  I'm in a bit of a love/hate relationship with this paper.  I love that I am learning so much from it, and get little thrills when I find that I have not only understood something, but have been able to put it into practice.  But I hate that I am finding it so difficult to write the assignments.  I've never been good at putting my thoughts into words, and am absolutely terrible at explaining anything (seriously, do NOT ask me for directions!  I will get you lost!!) so writing down all that I have learned in a coherent format is no easy task.  I feel a bit like Tim Taylor from Tool Time.  Information goes in, but comes out all mixed up and sounding like gobbledegook.  I must be doing something right though, because I got 78% on my last report (unofficially - they still haven't sent the results).  Not the best result, but I'm happy with that.  At least it's a pass!

Studying only at night has given me a little more time to do other things during the day - yesterday I went crazy on the housework and cleaned the bejeezus out of the bathrooms.  I'm talking OCD-level clean, people!  Those bathrooms are sparkling!  I got out an old toothbrush at got into the all the little nooks and crannies around the taps and in the shower.  The mirrors are spotless, the walls are cleaner than they've ever been... In related news, I now understand why my fingernails are always so mangled-looking.  Must buy more toothbrushes...  I also vacuumed, mopped, got all OCD-like on the walls (white walls mark easily, just saying), and dusted everything (well, mostly everything, I didn't do the top of the bookshelves.  Nobody can see up there anyway).  My house is clean!!  The laundry is all done!!  You know what that means?  Knitting time!!!

I've been working on a hat for Deane to wear in Vancouver.  I started out using some ridiculously squishy soft alpaca yarn I received recently in a swap (Indiecita DK in a gorgeous charcoal), but after three cast ons (first one I screwed up the pattern, second one I ran out of yarn for the long-tail cast on (hate that!), third one I got three pattern repeats in and decided you couldn't see the pattern well enough due to the fuzziness of the yarn) I decided to give up on that and try something else.  Same awesome pattern, different yarn.  After dropping Deane at the airport on Monday, the kids and I made a little detour to Mishi Yarns in One Tree Hill (which is closing soon, bummer), where I found the perfect yarn - Naturally Heather DK in a lovely mid-grey.  The pattern calls for worsted, but this DK is on the thicker side.  That, in combination with the stretchy rib, means the yarn is perfect!  It also has a satisfyingly sheepy smell about it.  I love that.  I managed to get ten pattern repeats done over the last couple of days: 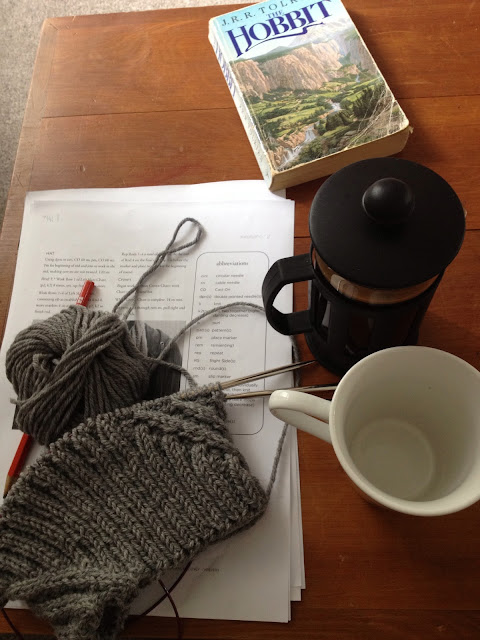 Pic of the hat-in-progress during a coffee break yesterday in between bouts of housework :-)  And yes, I'm reading The Hobbit.  I figured if I read a bit of it to the kids each night before bed, I might actually get through it.  I think it helps that they've seen the first movie (or in T's case, half of the first movie) - it helps them understand what's going on, as they can visualise the scenes and the characters.

I'm stopping the repeats at 10 instead of the 12 called for in the pattern, as people have noted that the hat seems very tall.  I am of the same opinion, having tried it on last night and deciding that it is plenty long enough. 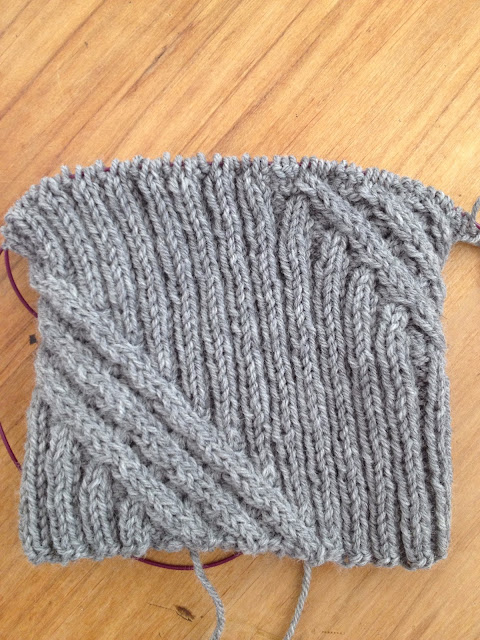 So today I'll knit the crown shaping (which I'm really looking forward to - it looks so cool on the finished hat pictures!) and then, on to the scarf!!!  If I don't get it finished by the end of next week, I can always knit it on the plane :-)

Something I can't do while Deane is away, is run.  Nobody to look after the kids.  Sigh.  But that may be a good thing - rest days are part of training and being able to continue running.  Plus, the big toe on my left foot looks like this: 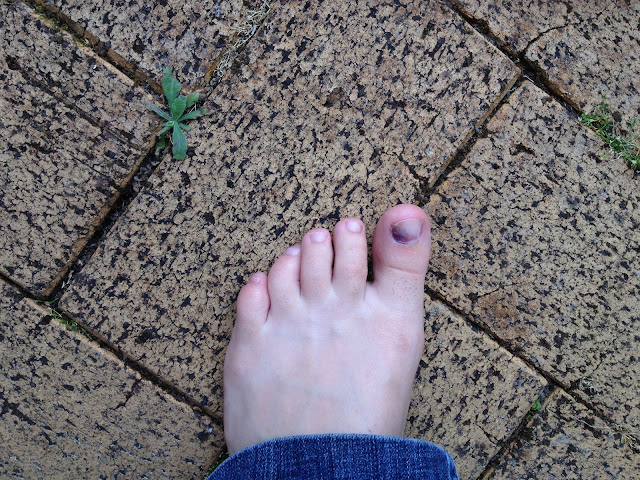 That is not nail polish!  My poor big toe got a bit of a hammering on my long run last weekend.  Speaking of which... I planned on running 24km+ on the Saturday, and prepared myself for it that morning.  I got up at 5.30am and ate a good breakfast, so I was ready to head out the door at 7.30am.  I put on sunscreen, wore my favourite (newest) running shoes, comfy shorts and singlet top.  I had my phone, headphones, gels, and a bottle of water.  I figured since I was planning to run quite a distance, I'd best start out at a fairly leisurely pace so as not to burn out too early.  This turned out to be a mistake.  My legs, not used to running at the slower pace, got quite fatigued - the shin muscles on each leg were burning by the second kilometre.  I tried walking for a bit and starting up again, but that didn't help.  So I resigned myself to the fact that I wouldn't be running the distance I'd planned, turned around after 5km and headed home.  I figured that since I wouldn't be running far I might as well pick up the pace.  And you know what?  By the time I got home, my legs were fine!  (That's how I know it was the speed that was the issue).  I was a bit sulky for a while, then decided to get over it and go for another run the next day.

So on Sunday I got up (a little closer to 7am, which is slightly more respectable), had an Accel Gel (which by the way was horrible!  I'm not sure if it was the flavour (orange) or if they're all terrible.  I have three left in the cupboard, so I'll let you know), and headed out the door, sans headphones and water bottle.  With the plan to only run 15km, I just ran my normal pace.  Guess what?  No problems!  So I kept going, and ended up running 20km instead.  At about the halfway point, I had another gel - this time a GU Gel (which was way better - nicer consistency, more palatable flavour (Strawberry Banana), and easier to eat).  Then when I got home, I cooked myself some bacon, scrambled eggs with cherry tomatoes, and had some wheatmeal honey bread (baked the previous day) with goats cheese.  I was pleasantly surprised to find that I didn't feel tired or headachy for the rest of the day, which I've found can happen if I don't drink enough water or refuel during long runs.  Plus, Deane kindly gave me a leg massage which most likely helped with muscle recovery.  It was later this day that I discovered what had happened to my toe nail.  I'd been wearing my trail shoes, which are a little more snug-fitting than my other pairs.  They also give me blisters (on my left heel only.  Poor left foot).  Note to self, do not wear trail shoes for long runs.  Hmm, maybe I need another pair of road sneaks...  Next long run, I'll try having a gel beforehand again (instead of breakfast, which I'll have after), and will try the GU Chomps during.

This week I squeezed in an 8km on Monday before Deane left, then Tuesday, Wednesday and Thursday are (enforced) rest days, and I'm hoping I can try that 24km+ run on Friday.  IronMan 70.3 is on this weekend, and it's being held around the viaduct and Tamaki Drive areas where I usually run, so I'd like to avoid trying to navigate around that.  If not, I'll go for Plan B (run other routes around Ponsonby, Westhaven, Herne Bay etc - shorter runs, but full of hills.  A good challenge).

Another thing I can't do (or rather, shouldn't) is bake.  I've been baking so much lately, I've started giving stuff away - our friends Ben & Lichelle are rather enjoying all the goodies I keep foisting on them.  Yesterday it was zucchini bread and another loaf of plain white bread (best batch yet - it gets better every time!).  But I've been eating a lot more lately, and with Deane away there's nobody else to eat the stuff the kids won't, like the zucchini bread, and these rather delicious cinnabon cookies (which are now, thankfully, all gone.  They were ridiculously good though): 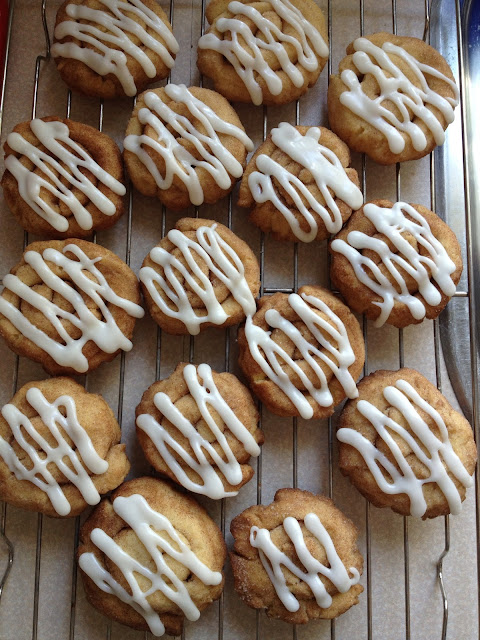 So I have to stop making so much yummy stuff.  It's too dangerous!  But oh, I'm having so much fun!  I made wholemeal pita bread the other day: 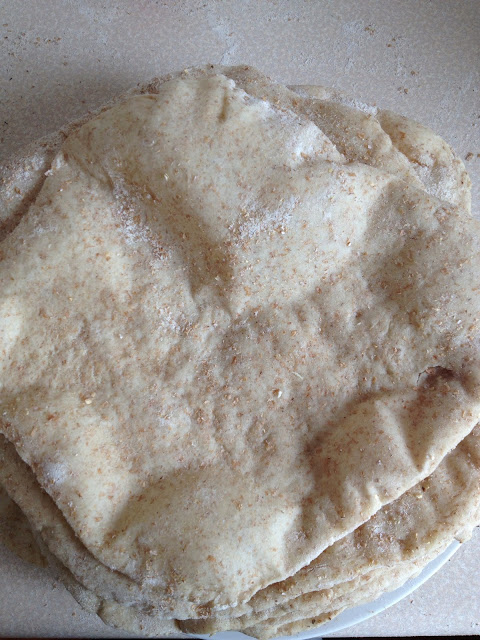 It doesn't look the prettiest, but damn it was good!  So much better than the store-bought pita bread - fresh, warm and fluffy.  Next time though, I'll make them smaller and thicker, and probably use all white flour so the kids will eat them (fussy little horrors).

I am baking another loaf of bread today (the other one is nearly all gone) and I'll make a pizza base for dinner tonight.  Maybe some more cookies for the kids, as they've nearly finished the other batch (the vanilla chocolate swirl cookies that T helped make the other day).  That should do it.  The rest of the day is knitting time!  My hot cup of tea and favourite rocking chair is calling, I'm off to lounge and knit.  Enjoy the rest of your week!
Posted by kreachr at 10:10