On my last two long runs, I've seen a rainbow.  Granted, they've been different kinds of rainbows, but rainbows all the same.  Last weekend's 20km was this rainbow sighting: 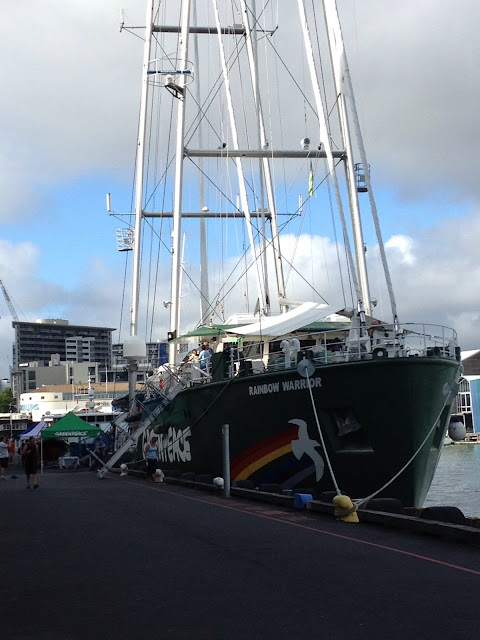 The Rainbow Warrior was in port, and taking groups on tours of the ship interior.  No time for me to stop though, I had a 20km to finish.

On this week's long run I spotted this beauty: 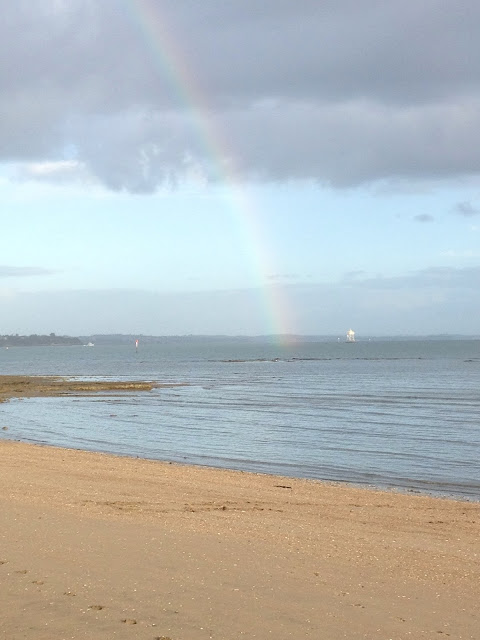 It's a little hard to see, but that was my longest and farthest run to date, started before 6am.  It took me 2:15:50, and I loved every minute of it.  I had a gel before heading out the door - another of those Accel Gels.  I will admit that this one tasted a little better (Strawberry Kiwi), but it was still pretty awful.  I won't be buying any more.  Unfortunately, I still have two vanilla flavoured ones left, ugh.  I ran an average pace of around 5'26" for pretty much the whole run (of course, pace varies per kilometre, but I kept it pretty steady).  The weather was pleasantly cool, and there were a few bouts of rain, hence the rainbow which popped up between drizzles.  This run I didn't take headphones or a water bottle - there are enough drinking fountains along the way to keep up with hydration, and I've found that I quite enjoy the quiet of just running.  I think I'll reserve headphones for fast 5km days - fast paced music gives you a speed boost ;-)  I did take some GU Chomps - Cranberry Apple with caffeine.  I'd had a late night waiting for Deane to get home from Sydney, and didn't get to bed until nearly midnight.  Sleep wasn't overly cooperative either.  So I was a little tired and figured the caffeine certainly couldn't hurt.  They were yummy!  Easy to eat on the move, and it didn't matter if you ate some then didn't drink for a kilometre or two (which happened when I mis-timed a drinking fountain stop and had to wait for the next one - oops!).  I will be getting more of these for sure (gotta try all the flavours!), and would recommend them.  I didn't feel at all fatigued at the end of the run (although my knees would argue).  I'm not sure how much of that was physical, and how much mental - I was so positive about this run.  I kept thinking to myself "I got this", and that thought, along with the knowledge that my body was feeling good, made me really happy.  And a little added bonus - no pitstops!  That was one of my concerns - I hadn't previously been able to run this long without needing to stop for a toilet break.  So yay!

Now before I change subjects, just a few more things - I've scoped out a few areas to run in Vancouver and I'm really looking forward to it (wow, we leave in a week!!!), but I can't imagine I'll get much time for running.  Looks like we'll be spending a bit of time on Whistler (and I'm not complaining about that!  Snowboarding, zip-lining... oh, such fun!!!).  Also, there's a lululemon outlet store in Vancouver (where the company is based) so I'm going to have fun shopping ;-)  Unfortunately, Deane is struggling to manage 5km on the road - he can run it okay on a treadmill, but as you may know treadmill running is much easier than road running.  To be honest, I thought he was a little over-ambitious wanting to go from 0-5km in a matter of a few weeks, but the man is stubborn so it's advisable not to place your bets too early.  I still wouldn't put it past him to pull it off at the fun run.  I'll let you know how it plays out when I get back ;-)  Also, I have signed up for the Auckland Round the Bays Fun Run on 10th March.  The other races this year seemed so far away (the first of the Unitec series isn't until July!!) so I thought an 8.4km fun run sounded like just the thing ;-)  Thanks to Sherry, for the idea!

This week has seen me power through the longest assignment I've come across so far - a three parter.  First part: build a database.  Second part: create a PowerPoint presentation and write an accompanying speech.  Third part: report on the systems development life cycle of a business information system etc etc etc.  I finished writing the report for the third part yesterday.  I haven't submitted it yet because I was unsure of how to correctly reference and cite the information I'm using from the set text so I'm waiting to hear back from the Learning Centre about that, but it is done!  I can sumbit it first thing next week.  Phew!!  I might even knock out the last module on ergonomics so all I have to do when I get back is revise for the exam at the end of February.  Sounds like a plan to me ;-)

It's also seen me knit a hat for Deane, and make a fairly good start on the matching scarf.  Here's X modelling the hat for me (since Deane was in Sydney): 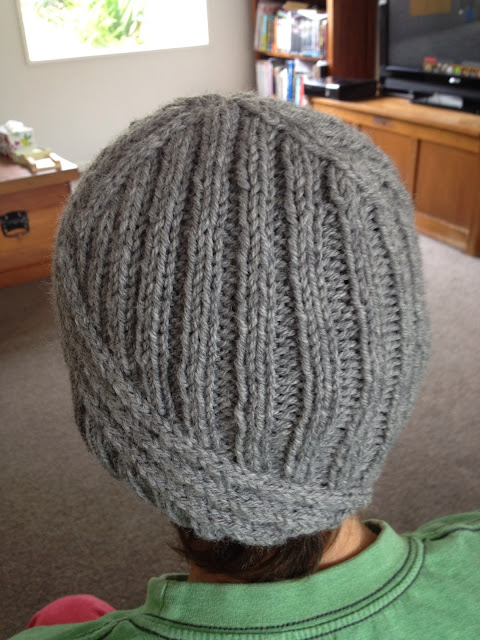 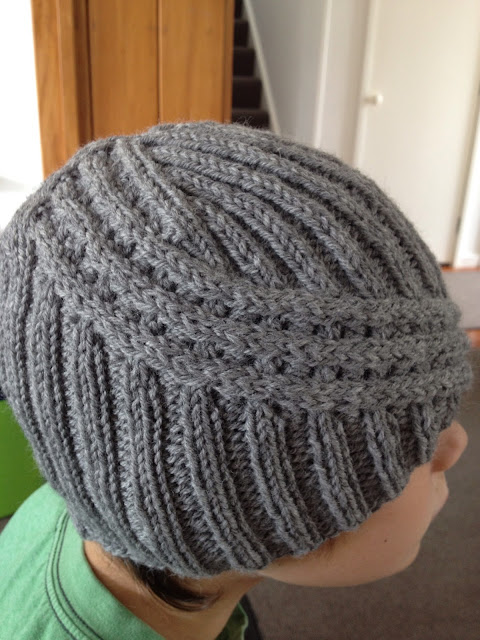 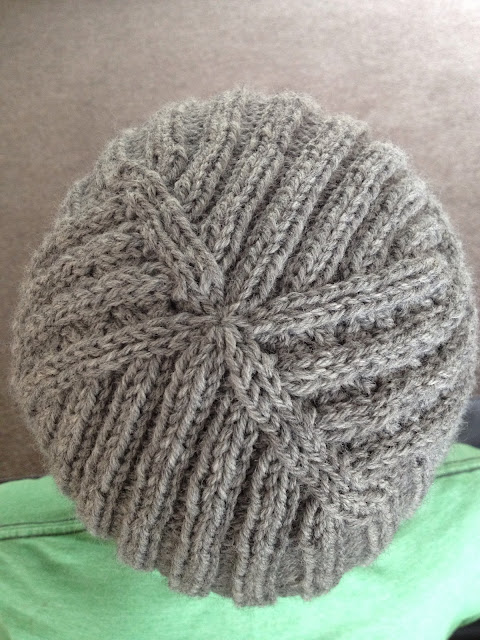 Autobahn, knit in Naturally Heather.  I really like the style of the hat - it's very eye-catching.  I've made a fairly decent dent in the knitting of the scarf too: 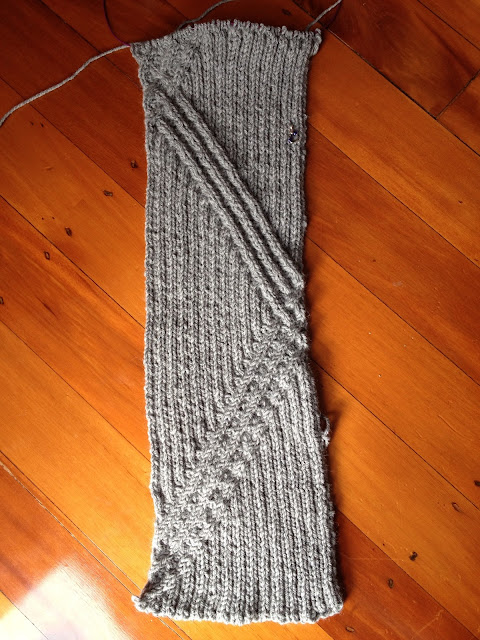 This is apparently halfway, which seems ridiculously short to me, so I think I'll knit an extra pattern repeat (btw, this is one full pattern repeat.  They're quite long).  I know I can block the snot out of it and make it longer and wider, but Deane is a big guy, and needs a fairly substantial scarf.  The good thing is, with cabling on every second row there's no chance of getting bored.  The pattern is generally pretty intuitive, but you do have to pay attention to the cable crosses at the 'corners' as the direction of the cables changes.  The scarf is reversible too - the pattern is the same on both sides.  Gotta love ribbed cables :D  The only thing I'm not sure of?  How to bind off.  I did a 2x2 rib alternate cable cast on which gives a nice edge, but I have no idea out to bind off to match it.  Any ideas?

The boys are enjoying the holidays - this week we went clothes shopping for X to spend his Christmas voucher, got them each a Nintendo game for the car trip to and from Hawkes Bay (where they're staying while Deane and I carve the slopes in Canada), and shaved their heads.  Their hair was getting ridiculously long and girly-looking, so now they're wee baldies with buzz-cuts.  I like it when they've got shaved heads.  They look so much tidier, and their hair is so soft and fuzzy, I can't stop rubbing their heads :-)

I've also been trying to sort out some form of basic itinerary for our trip (as much as you can when you're married to someone like Deane, who lives for spontaneity) - we were considering flying to Toronto then going on a 3 1/2 day rail trip across Canada, but with limited time and only one available travel date, plus the idea of Deane stuck on a train for that length of time without any real form of engaging activity, we decided against it.  We'll just spend more time on the mountain instead.  I'm cool with that (but will admit that I really quite liked the idea of 3 1/2 days of knitting while enjoying a whole country of beautiful scenery out the window of a train, not to mention the possibility of seeing a moose).  Niagara Falls will have to wait for another time (as will meeting the Yarn Harlot - one of my 'I'd love to do that but I've got no idea how I'm going to pull it off' ideas for the trip.  Dude, the woman has a Wiki-page!).  On the to-do list is checking out the local yarn stores (which includes the Sweet Georgia Yarns Studio - oh my!), the Capilano Suspension Bridge, the Vancouver Lookout (like the Sky Tower, but without the casinos), Commercial Drive, and I'd really like to check out the Vancouver Public Library because the building is amazing (seriously, do a Google search for images).  Other than that, I'm open to suggestions.

But for now, that scarf of Deane's isn't going to knit itself, so I better get moving!  Have an awesome weekend!
Posted by kreachr at 09:54