Ridiculous problem #1: Pants.  My pants are too big.  My favourite jeans keep slipping down, so I'm constantly hiking them up.  My shorts are loose and look as though they're hanging on for dear life.  My skinny jeans just aren't skinny enough.

Ridiculous problem #2: None of my belts fit either.  Sure, I could wear them, but they'd be loose.  Which makes them completely useless for fixing ridiculous problem #1.  I could wear them tighter, but then they have a really long sticky-out end bit, which flaps around.  It's too long to fit snug across my front because it needs to wrap a little further around, but it's not long enough to tuck into the belt loop at the side.

Ridiculous problem #3: I no longer have enough boobage to fit into my bras.  My breasts are about the size of a 14 year old teenager going out to buy her first training bra.  Apparently that's the first place I start losing weight, and yet, when putting weight on it goes straight to my thighs.  Why not my boobs???

So as much as I am enjoying being fitter, healthier, leaner and more toned, there are down sides.  Like, needing a whole new freakin' wardrobe.  Gah!  We're halfway through summer now, maybe I can hold out a little longer and just buy new clothes next summer.  In winter, it doesn't matter quite so much - you can get away with floppier clothing.  Right?  Come oooooon, winter!!  At least (most of) my tops and underwear still fit...

Meanwhile in the house of kreachr, the school holidays are plodding along and we've been spending a lot of time just fluffing around.  On Saturday I headed out for a long run, intending to do about 16km.  I ended up running a half marathon, and knocking five minutes off my previous week's time.  Total distance was 21.11km, run in 1:56:35.  Awesome!  A sub-two hour half was my goal, and I've already achieved it in the first week of the new year!  Guess I'd better set a new time goal...  I have discovered that some form of refuelling is needed over these longer distances - I started feeling it at about 14km (although that may have had something to do with the sudden headwind due to change of direction).  I went out and got a few gels (GU and Accel gels) and some GU Chomps.  I figured I'd experiment a bit and see what works for me.  I'm always a little dubious about how I'll go with foods and liquids when on a run, as my tummy is dodgy at the best of times thanks to IBS.  But I had no problems with the Sport Beans, and I got to try a GU Chomp when I got my new running shoes on Boxing Day (the guy at Shoe Clinic had a packet of strawberry flavoured ones open and offered me one, after we'd been discussing various refuel options for long runs).  Once I settle on what works, I'll buy a bunch and be good to go!  The next hurdle will be hydration.  Deane got me a hydration belt for Christmas, but I've never liked the idea of wearing one.  Not only do I think they look really daggy, the sloshing would irritate me no end.  Plus, I hate having stuff around my waist when I'm running.  Hopefully I'll be able to get a Camelbak pack soon.  Fingers crossed they're cheaper in Canada ;-)

On Sunday we went to Browns Bay beach for a picnic breakfast - waffles, bacon, eggs, fresh baked bread, strawberry jam and lemon curd courtesy of mum, fresh blueberries, coffee and tea.  And sand.  No matter how hard you try, if you're picnicing at the beach sand will always, always get into your food.  We all dipped our toes into the water and deemed it just a little too chilly to go whole hog and jump in (to be fair it was only 9am and overcast), so we headed on home again and I went to knitting.

Yesterday I squeezed in a 12km before 7.30am, then managed to drag the kids out to the butcher, greengrocer and supermarket before we all blobbed for the day.  I spent hours browsing Pinterest, Twitter, and various other internet locations.  I figured I wouldn't get much chance to chill out and do nothing from now on, so enjoyed it for one day.  Still fed the kids and did a bit of tidying, and some study once they'd gone to bed, so the day wasn't a complete waste.

This morning saw me out the door before 6am for a 15km (these short morning runs seem to be getting longer...) then we had an appointment for X at 9.45am.  Now we're home again, and I have comandeered the laptop so I can study (and update this here blog ;-P).  I have plans to get at least some of my assignment done (not due until 3rd February but we're heading to Vancouver on 26th January so I need to get it done in the next couple of weeks), and doing a bit of baking.  Ooh, speaking of food...

I made those cinnamon rolls for breakfast Christmas morning.  Um, wow.  I ended up using less than half a cup of melted butter for the filling part.  And it turns out I'm terrible at rolling dough into a tight roll - mine was very loose and floppy, which made it a little tricky to handle once I'd sliced the roll into 1" sections.  Transferring them to the dish was a messy affair, with buttery sugary cinnamon dripping all over the show.  But after a night in the fridge, they'd risen and expanded to fill the space, and after they were baked you'd never have known.  I also only made a half batch of the frosting - I'd baked the rolls in two dishes and just poured frosting on one dish of rolls.  But dudes, seriously, these cinnamon rolls are freakin' awesome!  Way better with the frosting, but pretty darn tasty without.  I will be making these next Christmas.  I do think they're a once-a-year kind of thing though - the batch, although already halved from the original recipe by the person sharing it, was huge.  It made enough for six adults and four children, and there were still leftovers a couple of days after Christmas!  To be fair, we had heaps of other stuff for breakfast as well (waffles, bacon, fritattas etc) but you do end up with quite a lot.  You'd want to make them when you've got a large amount of people to feed.  Or if you plan on eating cinnamon rolls for breakfast, lunch and dinner for two or three days.  Whatever, I won't judge ;-)

Also, I think I have perfected my crusty bread - I've made several loaves now, and am at the point where I'm happy to start experimenting with flavours.  The boys love it (they're big fans of fresh baked bread).  The bread resembles a ciabatta once baked - fairly dense and slightly chewy in texture, with a crusty (as the name suggests) outside.  Really quite delicious, and very nice with mum's strawberry jam or lemon curd.  I have found that I get better rising results if I put the dough in the hot water cupboard, and leave it to rise for about five hours or so (ie make the dough in the early afternoon, then bake the bread in the evening, ready for the next morning), and recently I've been using one rounded teaspoon of breadmaker's yeast instead of a half teaspoon of dry active yeast.  Either works fine though.  I'm thinking of making a loaf this afternoon with maybe some gruyere cheese and herbs.  Or perhaps some cinnamon and raisins.  Or maybe I should just make two loaves...

We tried this roasted cabbage the other day, and it didn't really work out for us.  Deane made it, and ended up having to cook it for nearly twice as long, and it was still really crunchy.  Having said that, we had quite a large cabbage, and Deane hadn't properly covered the quarters in tin foil (I'd have cut out the core and wrapped them much better!), but we came to the conclusion that this recipe wasn't one for us.

I made brioche nanterre, which was ridiculously yummy!  Making the dough was a little challenging, as I don't have a cake mixer.  I ended up putting everything in the food processor (once I'd come to the conclusion that mixing it by hand was out of the question), then once it was sticking together enough, dumped it out on the bench and worked the butter in by hand.  Let me just say that that part was actually quite fun.  There's a bit of a technique for incorporating the butter into the dough, as I discovered with this video, and it can make one hell of a mess.  But like I said, fun :-)  It came out pretty good, even though I wasn't really able to shape it all that well.  There was enough left over for a brioche pudding too.  I chopped the remaining loaf into large cubes and split them between two ramekins, then made an egg custard by bringing to a boil 350ml cream with a split vanilla pod.  I whisked two whole eggs and one yolk together with 60g caster sugar, then quickly whisked that into the cream.  I poured this over the brioche, then baked the puddings for 30 minutes, and served them with fresh strawberries and blueberries, dusted with icing sugar.  Sooooo gooooood!!!

And I can't forget the ice cream I made last week too.  I've never made ice cream before, because I thought you needed an ice cream maker.  Turns out, you don't!  I believe this recipe is an Alison Holst one, but I stumbled across it in a roundabout way (found on some random chat site) - this is how I made mine:

Separate three eggs.  Beat the egg whites until peaks turn over.  Add 3/4c sugar and beat again.  Beat the egg yolks with 1 1/2 tbsp warm water until frothy.  Add another 3/4c sugar and beat until light and thick.  Beat the cream.  Add flavourings (I used grated 70% dark chocolate and vanilla extract with seeds) then fold all three mixtures together.  Freeze at least six hours (will still be quite mushy), but is best after 24 hours.  Makes two litres.

I'm planning on making some hokey pokey ice cream this week - the kids have never made hokey pokey (a tragedy!!) so we'll make some and keep enough aside for the ice cream.  Yum, can't wait!!!

And just quickly before I go (because I really should be studying!!), I've got a couple of new projects on the needles - some socks that I started last week while watching the women's tennis semifinals:

Weasley Rib socks, knit with some unknown sock yarn I received a couple of years ago in exchange for some Ashford bobbins.

And I've started knitting a Cassidy hooded cardigan, using the yarn I bought Deane bought for my birthday last year - Knitsch Delft DK in Tennant.  Such delightfully squishy yarn!  It's quite thick, more like a worsted weight, which is good because that's what the pattern calls for.  I was a good girl, and knit a swatch before casting on the cardi, and discovered to my delight that the gauge was pretty much spot on.  Here's a pic of the progress I made on the first day of knitting the back: 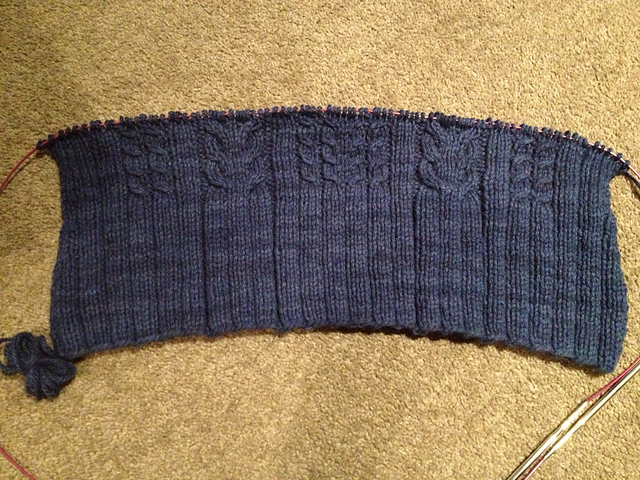 I've managed to get a little further since this pic was taken, but not much.  I'm part way through the increases on the upper part of the waist shaping.  I'm not in a hurry for this cardi, since winter is still several months away.  Ah, the beauty of knitting without a deadline...  Plus, I need to knit Deane a hat for Vancouver because it is going to be super cold over there!!

Okay, enough procrastination.  This assignment isn't going to write itself!  Have a good week people :-)
Posted by kreachr at 13:34