There's a solution to everything, you've just got to find it

Solution #1
I was happily knitting away on Deane's scarf yesterday, when to my horror, I discovered a mistake.  One tiny mistake, but a mistake that would be glaringly obvious to me every time I looked at the scarf, which would drive me nuts.  I just couldn't leave it there. 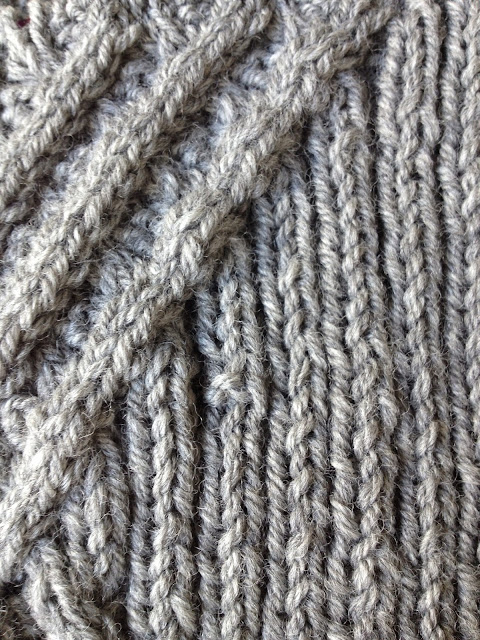 See that?  Smack-bang in the middle of that picture is a purl stitch that should be a knit.  Gah!  And what's worse is that I didn't realise this mistake until after I'd knit a bunch of cables above it.  You know what that means, right?  Can't just drop the stitch down and reknit back up, oh no!  You have to frog back to the mistake and knit the whole lot again.  But... do you...?  By sheer dumb luck, this happened to be the same row I'd had to change balls of yarn.  That meant there were two ends just hanging out the back a few stitches away.  So with a bit of knitting smarts, I duplicate stitched with different (very obvious) coloured yarn from where the loose end was up to the incorrect stitch (and a few extra in either direction, just to be on the safe side): 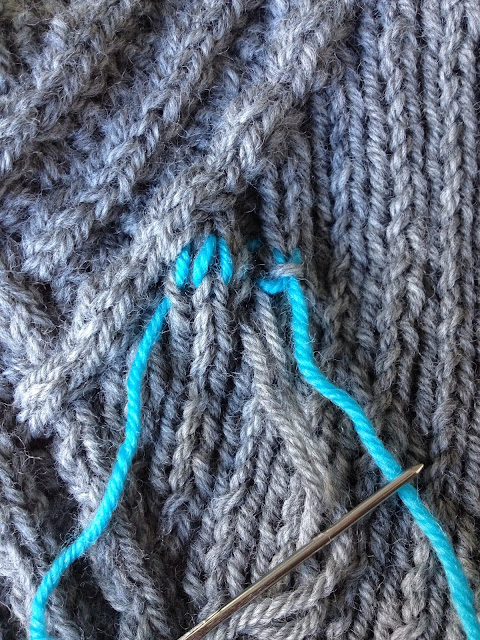 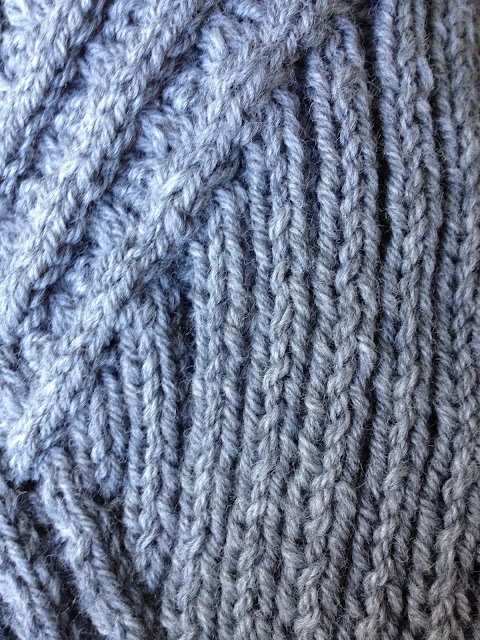 I was pretty happy about that :D

Solution #2
I wanted a nice tidy cast on and bind off for this scarf, that was stretchy and not obvious.  There are many options available of course, but I decided to use the alternate cable cast on in a 2x2 rib (because the scarf is worked in 2x2 rib).  Unfortunately, I couldn't seem to find a bind off that looked the same.  I had considered doing a provisional cast on and then binding off each end the same, but to be honest?  That seemed like a little too much work.  I can be a bit impatient at times, and damn it, I wanted to cast the scarf on NOW so I just did the cable cast on, figuring I'd find a bind off later.  As I was knitting the scarf, I would periodically do a search on the internet to see if there was a bind off that looked similar, if not the same.  I asked the Twitter-verse if anybody knew of something suitable.  I wasn't having much luck.  It was suggested I try the standard bind off in pattern, so this afternoon when I finished knitting the scarf, I gave it a go.  Nope, I wasn't happy with that.  So back to the internet I went.  Now usually, my Google-fu is pretty weak, as if I couldn't find an ice cube in a freezer.  But luck was upon me today my friends, because I stumbled across this YouTube video.  And you know what?  The bind off was exactly, exactly what I was looking for: 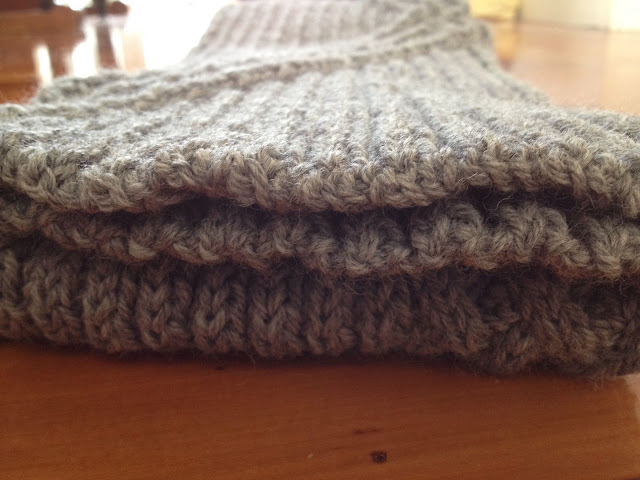 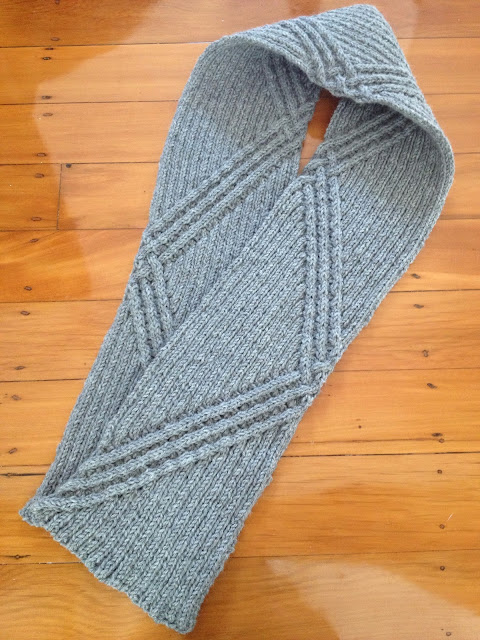 Awesome, huh?  I love it.  And may possibly steal borrow it off Deane at some point.  I haven't bothered to check the row gauge because I know it'll be out, having knit this in DK weight yarn instead of worsted, but it was a little too short after having done the two full repeats as suggested by the pattern, so I knit a third one.  It's a little over 1.5m long now (which was the recommended length) and I'm pretty happy with it.  There may be a mis-crossed cable at the very beginning of the scarf, but seriously y'all, I'm not going to reknit the whole thing.  It can just bloody well stay there!  I'm doing my absolute best to ignore it (although I might just frog back the end of the scarf a little and mis-cross a cable to match.  We'll see).

Solution #3
You may recall some time ago (July/August last year) I knit this sweater: 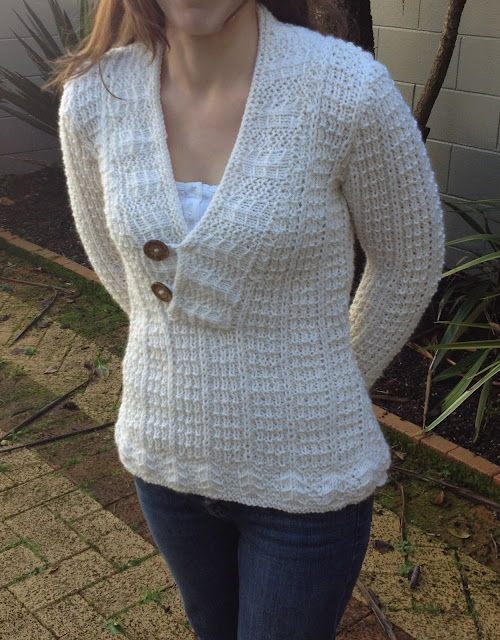 Let me tell ya people, I luuuurve this sweater.  Of course, it's been too hot to wear it for some time, because of it being summer and all.  So it's been sitting in the hand-wash pile for a while.  The other day I figured it was time to wash these knits, as I really wanted to be able to wear the sweater and my handspun cardi whilst in Canada.  So I dug out the Soak and hand washed everything.  Not surprisingly (because of the relatively loose-knit style) the sweater grew.  A lot.  I mean A LOT.  So I laid it out on the floor and smooshed it up, figuring it would shrink a little as it dried.  I left it for a few days just to be extra sure.  When it was absolutely definitely dry, I tried it on.  It was a little too loose for my liking.  Not huge, like it was when it was wet, but not the comfy snug fit like in the picture above.  This would just not do!  So this morning I hurled it in the machine with a bunch of other laundry, then threw caution to the wind and chucked it through the dryer as well (even though the care label for the yarn says cool hand wash).  Guess what?  My sweater is now perfect!  Hooray!  So it's going in the suitcase with all the other knitted goodies to keep me warm in Vancouver.  ::more happy dancing::  Of course, now there's a bunch of clothes covered in white yarn fluff...

Right, time to get off the computer and get the boys sorted for bed.  Have a good week!!
Posted by kreachr at 19:25