Well, knock me down with a feather...

...I'm going to Vancouver!!  In two weeks!!!  Yes, yes, I've mentioned it several (hundred) times already, but it never feels real until those flights are booked and paid for, and I have my e-ticket in my email inbox.  W00t!!!  I can't wait!  And the coolest thing?  Deane's company is participating in a fun-run on my last day there, so I'll be joining them.  It may require some new running gear though.  7am start, in Vancouver, in the middle of winter.  Methinks it may be a little chilly and possibly snowy and standard kiwi running gear just won't cut the mustard.  Ah, I love a good excuse to buy more gear ;-)  Deane will need some too, since he will also be running.  Bless the man, he went to the gym the other day and ran 5km on the treadmill.  No small feat for somebody of his size, who has previously not run before.  Sure, he said he was pretty dizzy and felt a little sick at the end of it, but who hasn't been there, right?  I'm having visions of he and I running the streets of Auckland together...  hahahahahahaha!!  Hilarious!  There's actually three distances (that I'm aware of) for the fun-run - a half, 10km and 5km.  I'd love to do the 10km, but I suppose since I'm there with Deane for his conference, I should probably 'stick with the group' and run the 5km with the rest of the company boffins.  No worries, I'll just run faster than them and kick their butts ;-)

Confirmation of my trip has been the bright light in a week of grey.  I have been working on my assignment in order to get it finished before we go.  I'm on the first section, which requires you to build an Access database.  No problem, except I've come up against a problem that I cannot see my way through.  I spent no less than six hours yesterday trying to figure it out, and I have made no progress on it at all.  This morning I sent an email to one of the lecturers, so I'm hoping for some feedback soon, fingers crossed for the helpful kind.  So far with this paper, they've been pretty useless.  Grrr.  Knowing my luck it'll be something super simple and I just couldn't see the wood for the trees.  I have also been trying to figure out a study plan for the rest of the diploma and the degree.  Having spoken to one of the advisors this morning, I've decided to go ahead and enrol in the degree and get stuck into the level five papers for that.  The diploma will get finished probably around the same time - late 2015 (if I can manage three papers in one of the trimesters.  Hmm, we shall see...) or early 2016.  Gosh, that seems like forever away.

Nothing much else has been happening this week since a lot my focus has been on this assignment but we did make it out of the house for an hour or so yesterday (plus I squeezed in a 5km run before breakfast) - we went to the park and had a picnic lunch, then the kids played on the playground. 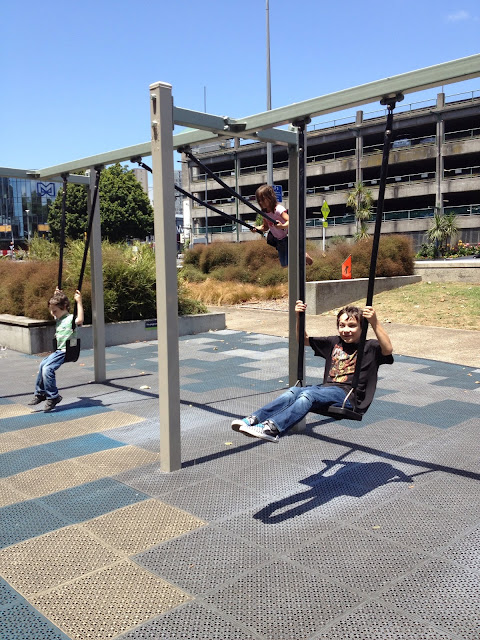 Yay, swings!  I had a go too, and remembered how fun it was.  I also had a go on the merry-go-round, which was fun until I remembered that I'm no longer a kid and that dizzy spinning feeling doesn't feel quite as good when you're an adult.  Felt a bit queazy for a few minutes after that, and had to have a bit of a sit down...﻿ 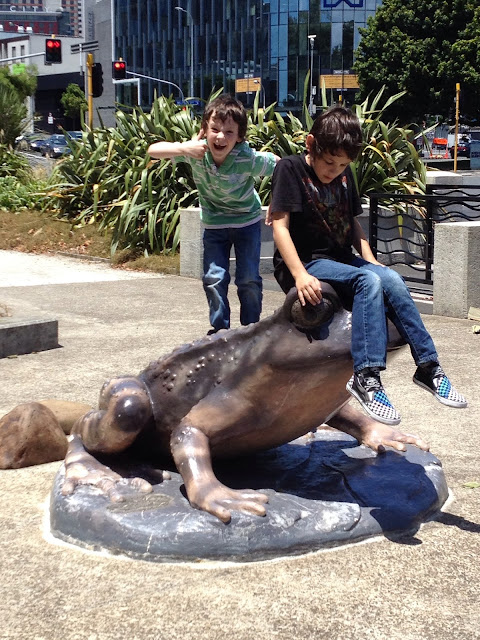 Then we had this 'pose with the freakishly large animal statue' episode, where T stole X's 'signature photo move'.  A fight ensued directly afterwards (it came to blows mere seconds after I snapped this pic):﻿ 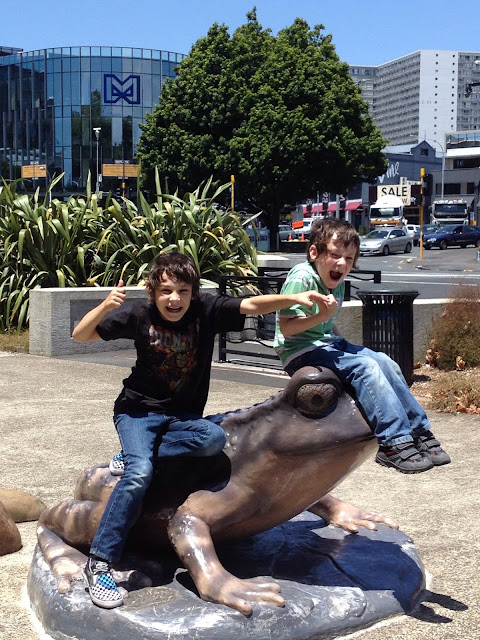 I found it quite entertaining, but the boys got a little upset.  Time to go home.

Knitting of all kinds has stalled, but I have at least finished one sock: 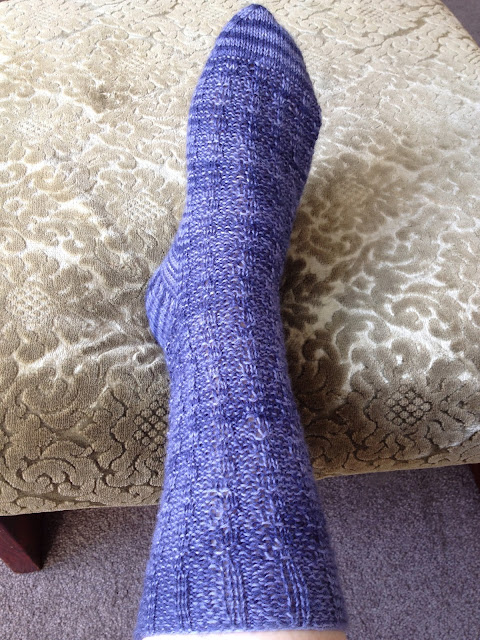 Next on the needles will be a hat for Deane to wear in Vancouver.  I'm thinking this pattern.

Today however, I will be baking some stuff I've been wanting to make for the last couple of days but didn't get to - gingerbread cupcakes, cinnabon cookies, more granola (because it's awesome and keeps disappearing), this time with dried figs and dark chocolate, and more crusty bread.  I'm going to try wholemeal and honey today.  The other loaves turned out really well - gruyere and rosemary (although I think next time I'll just use normal cheese), and cinnamon, raisin and pecan (that one was really delicious!!  I'll definitely be making it again.)

Update:  Granola made (okay, but the white chocolate works better, as does apricot and raisins), bread rising, cinnabon cookies in the oven, and T decided he wanted to make some vanilla chocolate swirl cookies, so the gingerbread cupcakes can wait for another day :-)