I had my exam on Friday.  I'm pretty sure I bombed, which is a little disappointing considering the other two assignments for this paper both earned A+.  I was kinda hoping I'd get an A+ paper.  Unfortunately for me, I've always sucked at exams.  My memory resembles a sieve (I'm pretty sure I've mentioned this before), and my brain doesn't perform well under pressure.  I've never been one to come up with witty retorts on the spot.  I'm the person that thinks of something to say about five minutes (or half an hour) too late.  So I'm not surprised I didn't do so well.  And I did study... eventually.  I managed two or three days of study, but clearly didn't revise all the topics I should have.  Oh well.  Now I just have to wait and see what my result is.  In the mean time, I'll look on the positive side.

I have completed my first full year of study!!  Hooray!!!  Also, I am now officially a degree student!  I signed up for two papers this trimester, that will go towards my Bachelor of Applied Science.  Exciting, and a little scary.  I'm going to have to be more organised this year, because I'll need more study time.  Shouldn't be too hard, considering how much time I had to fluff around last year.  Of course, that also means less knitting time... or... less housework time... ;-)  Nah, a messy house would drive me barmy.  I digress.  This year I'm going to try and do five papers, next year another five.  That will leave me with five more, which I can hopefully do in 2015.  For now though, I'll focus on getting the hang of studying two papers at a time.

I managed plenty of procrastination this week, filling up my time with ridiculous amounts of Pinterest, Facebook, Twitter and baking.  Sadly, not much knitting (which is what I should have been doing if not studying!) - I'm behind on the afghan.  It's only a quarter done.  Oops...

On the up side, my sourdough starter is alive and well!  So far I've made pancakes, waffles and crumpets, and seven loaves of bread.  The pancakes, waffles and crumpets were all very successful, but the bread... well.  I wouldn't say they were complete disasters, but...  Loaves one and two I proofed overnight just on an oven tray, because my loaf tins are manky and old, and have rust (I have since thrown them out.  Saves a lot on tin foil and baking paper!).  They ended up looking like this: 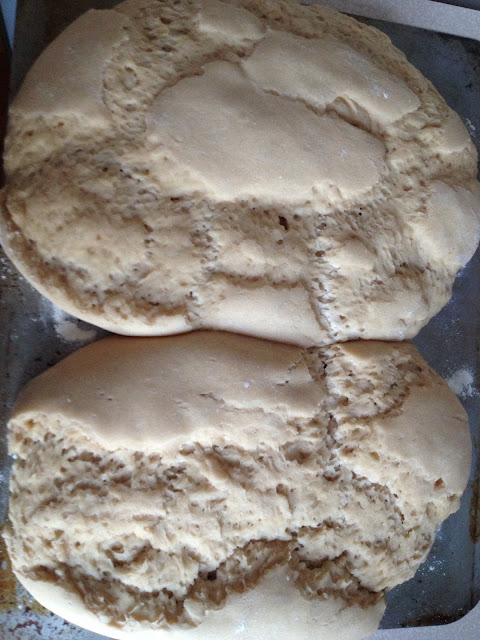 All flat and spread out.  I tried squishing them up into loaves, but it didn't really work out.  The bread was edible, but it looked attrocious!  Loaves three and four worked out great.  I had bought new loaf tins and proofed them in those.  Unfortunately, I'd covered them with plastic wrap.  I had failed to spray the plastic wrap with oil though, so it stuck.  I had to peel it away, which literally ripped off the tops of the loaves.  They didn't recover, and the resulting bread was very brick-shaped.  It tasted great, but the tops were so crusty and stabby that the kids would only eat it if I cut off the crusts.  I ended up making croutons out of one of the loaves (which we had with pumpkin and bacon soup tonight, that Deane made).  Loaves five and six were pretty good, but quite small.  I gave one loaf to our friends, and we ate the other.  Loaf seven was also good, but this happened: 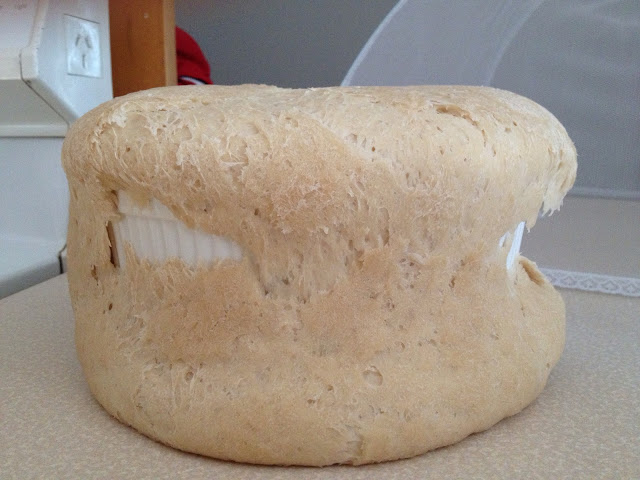 I guess my sourdough is just a little too enthusiastic!  I ripped off the 'overflow' at the bottom and baked the rest, and it was actually quite delicious.  It doesn't have much of a sour taste though.  Perhaps I'll have to experiment a bit more, once I get the hang of baking non-mutant bread.  Tonight, I've shaped the dough into small rounds, with the hopes that they will turn into bread rolls for the boys to take for lunch.  Fingers crossed!  I have plans to make more pancakes on Tuesday morning too.  I'd make them tomorrow morning, but I don't have quite enough starter for both pancakes and bread.  But that's the beauty of sourdough - you just keep feeding the starter and voila!  More starter!  Yum :-)

I also made almond milk a couple of times.  Deane and I like it, but it doesn't behave well in my cups of tea (it kinda does this gross curdling thing, urgh).  So I think I'll stick to dairy or soy.  After some consideration this week, I've decided I probably couldn't give up dairy, despite any possible health benefits.  I'd miss it too much!  Ice cream, all kinds of cheese, milk and cream... it's just so goooooood...

Sadly, I haven't been out for a run yet.  I went to the physiotherapist on Tuesday, and it turns out all that falling on my butt while snowboarding did a little more damage than I thought.  It's not just a groin strain, there's muscle damage all around the inner thigh area which will take a little more rest and careful stretching.  It does appear to be improving slowly though, so I'm hoping (really, really hoping!!!) that I'll be able to go our for a run this week.  It's been over two weeks since my last run (which was on 9th February.  Seems like forever ago), and I can just feel my fitness levels plummeting!  Not cool.  Plus there's the fun run in two weeks.  Guess I'll have to start slow and work my way up, maybe 5km.  The fun run is 8.4km.  I should be able to manage it.  I have physio again tomorrow, so I'll have a chat with him and see what he says.  Fingers crossed!!

* Last year when we were in Florida, I really loved listening to the comedy channel on satellite radio while we were travelling in the car.  There was this southern comedian that really made me laugh, particularly when he said 'get 'er done'.  Whenever I remember, it makes me smile.  I wish we could get satellite radio here, it's awesome.
Posted by kreachr at 21:52