Everything's back to normal. Almost.

In a bizarre twist, Deane is currently running more than I am.  I feel like we're in a parallel universe or something...  Sadly for me, that is not the case (although I am secretly very pleased that Deane appears to be continuing his fitness regime (or what there is of one) that began right around the time he signed up for the annual fun run).  I sustained an injury while snowboarding a few weeks ago - a groin strain.  I didn't notice at the time or while we were in Whistler, but once back in Vancouver it was a minor niggle.  It got progressively worse over time, so I thought it best to take a break from running.  Despite resting it, it is not healing on its own, so tomorrow I'm off to the physiotherapist with the hopes that he'll be able to fix it relatively quickly.  Is there some unwritten rule I missed that says once you pass age 32, all injuries take three times as long to heal? Gah!  I haven't been out for a run in over a week, and have done little to no exercise - only walking.  I'm starting to get a little frustrated, particularly as I have put on 4kg over the last few weeks (I'm guessing all that poutine we ate in Canada didn't help!) and would really like to work that back off and get back to my optimum weight, which I'd managed to achieve just before Christmas.  All that muscle tone, gone :-(  On the plus side, I fit my jeans again now!  Alas, still no boobs... ;-)

Everything else is hunky dory though - the kids settled straight back into school, and T went on a full-day trip to Tiritiri Matangi Island last Wednesday.  He had a great time, and told me about all the birds he'd seen while he was there.  I've been getting back into the kitchen and making ALL THE THINGS (also not helping with my current forced sedentary lifestyle).  Today I made some rather delicious buttermilk honey bread, peanut butter cookies, and chocolate chip muffins (which the kids really like - win!) and gave some home made rice milk a go, the recipe for which I got out of the book I just finished reading - Eat and Run by Scott Jurek.  Jury's still out on that one.  I love soy milk (although not all brands), but I'm a little dubious about rice milk.  I haven't yet tried almond or oat milk.  I'm intrigued though, to find out whether or not cutting dairy from my diet would help with stomach issues and health in general.

We also had a small dinner party over the weekend with a couple of friends, and introduced them to poutine kiwi style - bocconcini instead of cheese curd, but with proper poutine gravy we bought while we were in Vancouver.  We also had braised beef (Deane really enjoyed that at The Cambie) and we gave beaver tails a go, although the recipe I ended up using calls them otter tails or elephant ears (they were yum!!  Almost as good as the ones we had in Whistler).  I've also go a sourdough starter on the go, and I'm hoping to be able to make a few loaves with it from about Wednesday, when it will be about a week old.  In the mean time I have a little excess starter to deal with, so tomorrow morning we'll be having sourdough pancakes for breakfast.  Don't know if the kids will eat them, but they certainly enjoyed the french toast I made this morning!

I've also been busy knitting.  Friends of ours are getting married next month, and I've decided to make them an afghan as a wedding gift.  So far I'm halfway through the second repeat of eight: 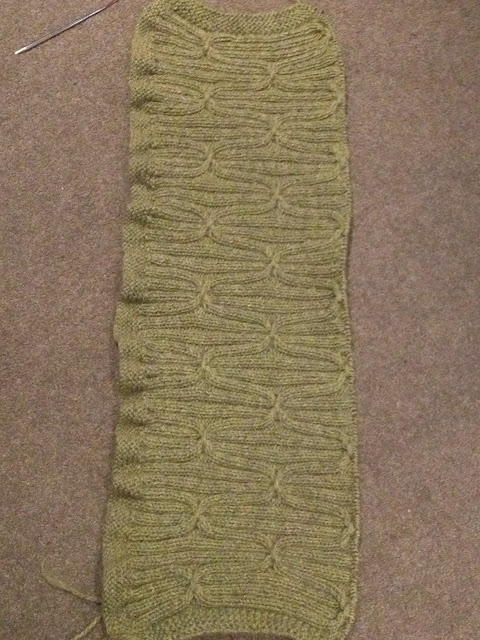 But I have some finished projects to show you as well.  Before we left for our trip, I cast on a pair of socks for Deane - they were a 'sorry you didn't get any socks for Christmas' pair.  I managed to finish those before we got to Whistler, so he could wear them on the mountain.  Me being me, I picked this pattern because of the name - Globe Trotter socks.  I got a kick out of knitting these in three different countries, and while travelling between all three.  Started in New Zealand, knit while on the plane, in Vancouver, at the US/Canadian border, in Seattle, and in Whistler, plus the car trips back and forth. 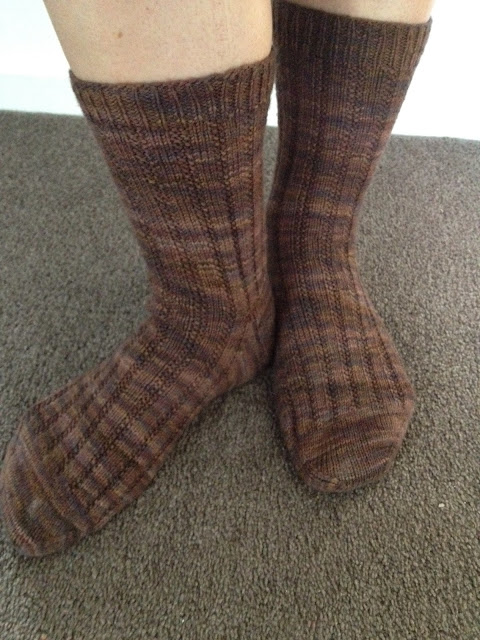 These were knit with Dream in Color Smooshy, which I luuuuuuurve!  This was the first time I'd knit with it, having wanted to try it for years.  I acquired it in a swap recently and oh!  I want more!!!  It's beautifully soft and squishy.  Couldn't tell you what colour I had though, I think it was November Muse.  Lovely.

I finished a hat I'd had on the needles since last November, in time to take with me: 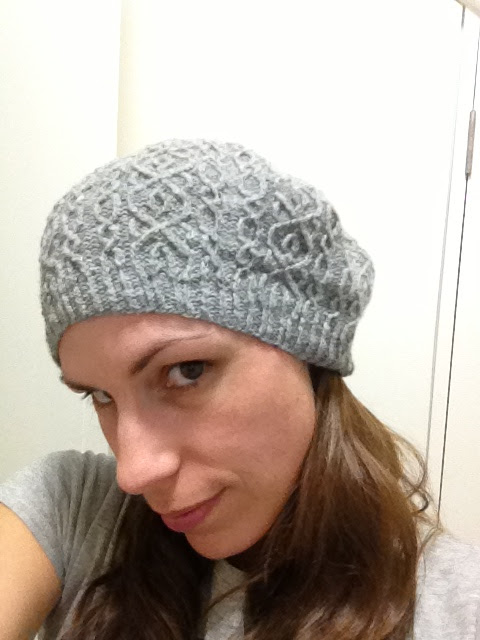 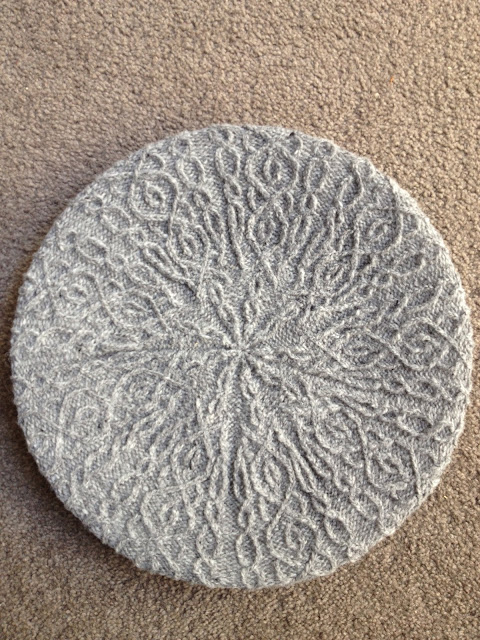 Jaffrey, knit with Brooklyn Tweed LOFT in Sweatshirt.  I found this quite a challenge to knit.  The pattern wasn't hard, I just found it tedious.  I had to knit it English-style, as the texture of the yarn and the style of pattern (Bavarian twisted stitch) was harder for me to knit Continental-style (which has now become my main knitting style).

While in Canada, and on my way home, I knit a pair of fingerless mitts.  What I found pretty cool was that the second mitt was cast on while on the plane from Vancouver to San Francisco, and bound off on the plane from Auckland to Napier.  An entire mitt knit on the plane (okay, there was an hour in the transit lounge in San Fran). 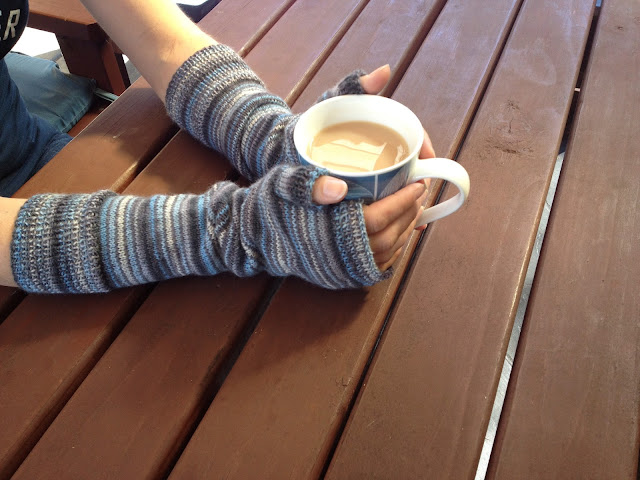 The pattern is a Regia pattern designed to match the yarn line.  I thought as I was knitting these mitts that they reminded me very much of the colours of the sky in Canada.  I love them.

And when I got back on solid New Zealand ground, I cast on another pair of socks for Deane (these were the 'I feel guilty about the amount of money I spent on yarn and running gear' socks), which I finished the day before he arrived back home: 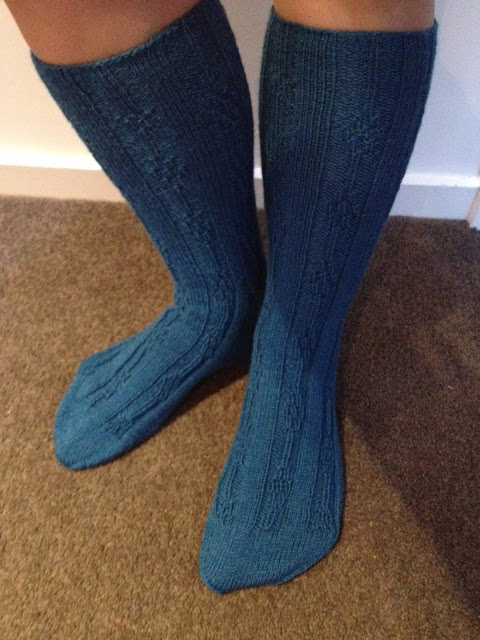 They're knee-high on me, but not quite so big on Deane, naturally.  I loved the pattern though, having seen it recently on the Yarn Harlot's blog (she designed the pattern).  These were knit with some Spud & Chloe Fine yarn (colourway Anemone) I bought at Wool is Not Enough.  I picked this yarn for him because a) the colour was manly enough, and b) it had good yardage, more than enough to match the pattern.  Having said that, I wasn't overly impressed with it, and won't be in a hurry to get more.  It was fine to knit with, but the yarn is quite unusual, and I don't particularly like the finished look.  It appears to me as though they've used low-quality silk offcuts in the spinning process.  I'm not saying that is the case at all, that's just my opinion of how it looks.

Anyway, Deane is home now and likely waiting for me to get off the computer so we can watch something, so I best be off.  Tomorrow, physio, and more procrastinating about studying for my exam this Friday (eek!!).  See you again soon!
Posted by kreachr at 21:36