So I had my knee x-rayed.  Guess what?  It's not broken.  No surprises there.  My physio says the bone is likely bruised, which would not show up on an x-ray, plus there's the inflammation behind the kneecap which, again, would not show up on an x-ray.  But I'm still not allowed to run, or do lunges or squats, or any other exercise that exacerbates the problem.  Sigh.  What I can do though, is cycle.  I am eagerly awaiting the arrival of my trainer, which I ordered online yesterday (no I didn't manage to sell anything on Trade Me yet, but Deane got sick of my moping and sulking and MADE me buy one).  I received an email to say that it is on its way, and they expect it to be delivered some time tomorrow.  Yaaaaaaaaaaaaaay!!!  I believe I will be spending some time setting it up, and then a good hour or two cycling my heart out!  Or maybe I should say cycling my butt off.  Yes, that's a better analogy, and one I would rather have happen considering the food I've been eating lately.

I made the most amazing hot cross buns yesterday.  You know how I mentioned I'd made some the other week and thought they were pretty good?  No.  I was wrong.  Oh, how very wrong I was.  Seriously, if you happen to have an Alison Holst recipe book lying around somewhere, and it just happens to have a hot cross bun recipe in it,  MAKE THEM.  They are awesome!  I made a batch of 12 buns without fruit, then kneaded a 1/4 cup of raisins into the remaining dough (which would've been enough for another three or four buns) to make a spicy fruit loaf for breakfast.  I am drooling just thinking about it!  Never mind that I had about four slices of it this morning...

Ooh, look!  Omnomnom!  Two buns were already eaten by the time I took this picture, and three more disappeared pretty soon after.  The boys had two each, and I managed to limit myself to one.  With lots of butter.  That gave me the excuse to eat two sprinkle cookies (and some cookie dough - shh!) later in the evening.  I had to be sure they were suitable for the boys' lunches, didn't I?  It's my duty as a mother ;-)  Then there was the lasagne we had for dinner this evening, and the ice cream and sprinkle cookies for dessert...  Yep, really looking forward to hopping on my bike tomorrow!  I even bought a wheel block today in preparation.  If you don't know what that is, here: 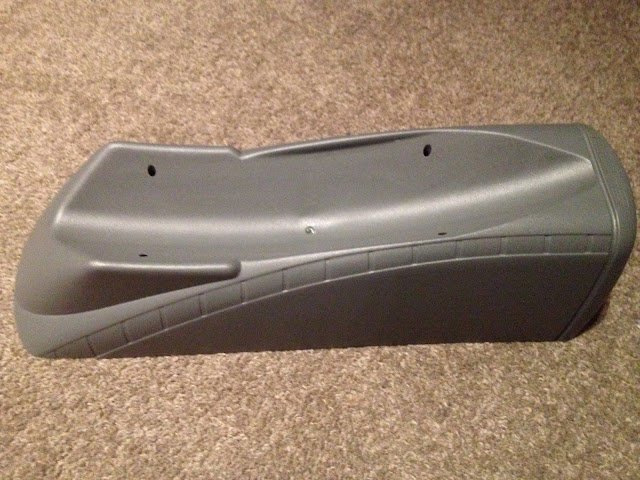 Your front wheel sits in it, both to stabilise the bike, and to lift the front wheel to be level with the back wheel which is sitting in the trainer, so you don't feel like you're going downhill the whole time.  I'm actually really excited, and can't wait for it to arrive!  It's been almost three weeks since my last run and I'm just itching to get out there.  This will definitely help take my mind off it, and keep my fitness levels up at the same time.  Win/win!

The weekend turned out to be busy for me, as the second round of Sock Madness started very soon after the first round had finished.  The moderators were really on the ball this year and teams were organised super fast!  I'm in Team Sockeroo, which is second fastest after Team Twinkletoes (choc-full of Norwegians.  Boy they're quick!  I'm so glad I'm not in their team.)  So early Saturday morning I wandered down the stairs, opened my email knowing the pattern would be there, printed it out, dug around in my leftovers stash (without waking the boys) and got settled in.  By Saturday evening, I'd finished the first sock. 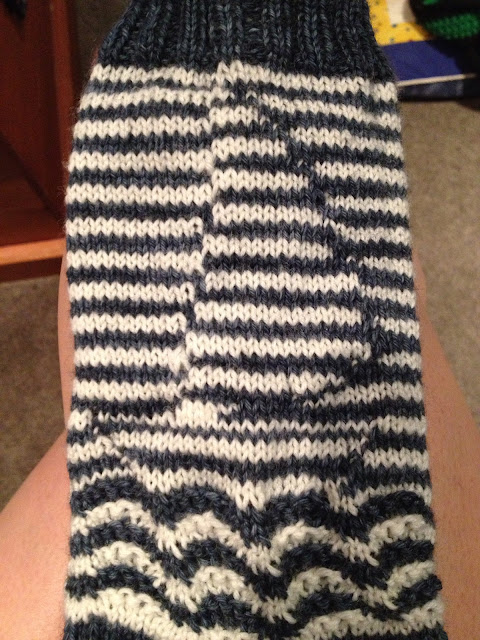 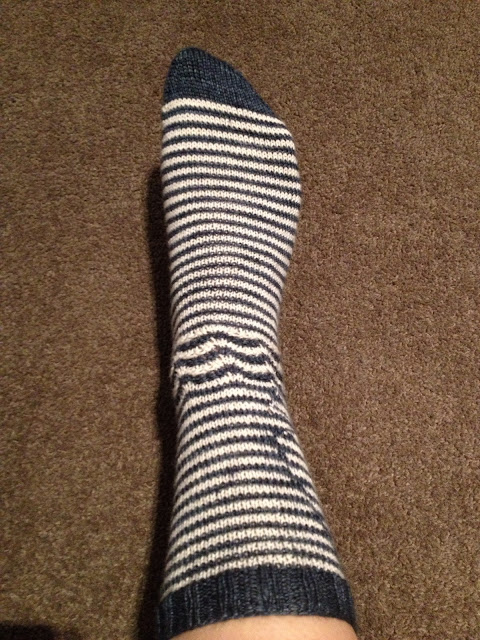 Sunday was a little slower but I managed to get the leg done on the second sock.  I had knitting group and couldn't concentrate on the counting required to keep the short rows going smoothly, so I put the sock away and dug out my Cassidy cardigan back, then finished the rest on Monday. 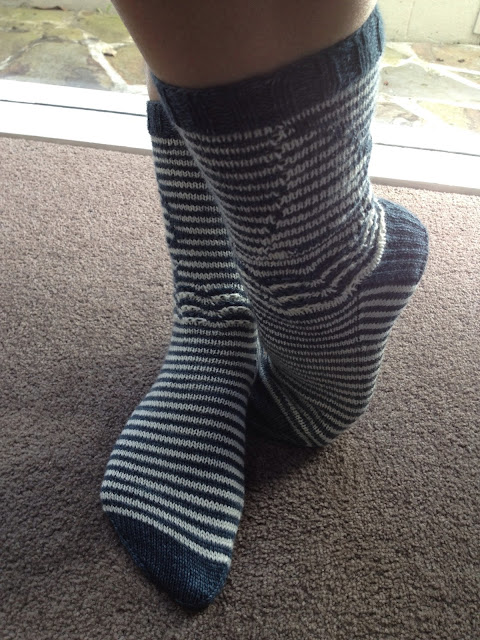 Sadly, I ran out of the lovely greyish-blue yarn before I'd finished the gusset decreases for the second sock so the foot is knit in a different colour, which you can see in this picture: 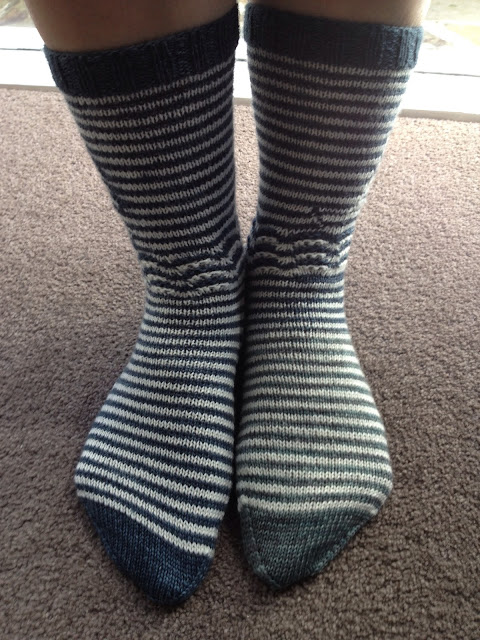 But I still love them :-)  The pattern is Flying Dutchman by Caoua Coffee.  Every year she creates an amazing, totally refreshing and different pattern with a new-to-me technique (here's last year's pattern, the year before, and I didn't enter in previous years but they were still awesome patterns).  This year it was short row intarsia.  Sure, I've done short rows.  I've done intarsia.  But intarsia in the round using short rows?  Totally new.  My mind boggles just wondering how people come up with these ideas, let alone figure out how to do it and write a coherent pattern!  Astounding.  So as mentioned, these were knit out of sock yarn leftovers - the greyish-blue and green are both Vintage Purls leftovers from socks I knit for Christmas presents last year, and the white is some Patons Patonyle I seem to have plenty of.  There should be a bit of a break now, while we wait for round two to wind down, then relax for Easter before cranking it back up for round three.  Oh, I so love Sock Madness...

Ooh, by the way, I finished the back of my cardigan and it's looking awesome: 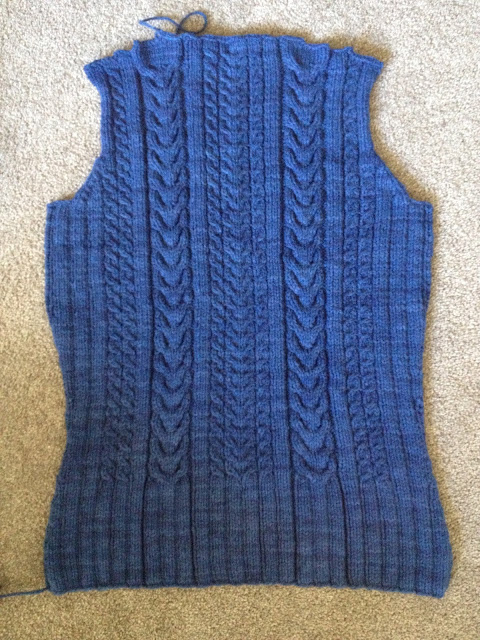 I have been good and fit in some housework and study as well, in case you're wondering ;-)

I've also spent a bit of time browsing online stores.  Thanks to the girls at Knit 1 Geek 2, I have discovered the wonder that is Adagio Teas.  I want to buy ALL THE TEAS.  Well, not really.  I don't like green tea, and some of the flavours sound ghastly.  But I certainly wouldn't mind trying some of the fandom blends, like Haymitch (Hunger Games), 007 (Bond, obviously), I Am Sherlocked (Sherlock Holmes of course), and Butterbeer, Treacle Tart and Draught of Peace (Harry Potter).  They all sound lovely.  But for now, I shall continue to enjoy my good old English Breakfast tea, and the occasional maple tea (yay Canada), and my range of herbals.  Mmmm, tea...

Also on the nerdy fandom train of thought, I clicked an ad link on Ravelry and found the most awesome little project bags by Anatomy of a Skirt on Etsy.  I love the expired milk, Edward and Jacob (hahahaha!!), Viking, lumberjack (OMG cute!), the invisible robot, transforming werewolf (although that wouldn't leave much room for anything else), ninja, Cyclops, and the tightey whiteys bot, but what really got me was the red shirt.  Hahahahahahahahaha!!!!  I want one of these, they're so cool!  Sure, they're probably only big enough to just fit a sock if you're really lucky, but they'd be good for holding notions if not a knitting project.  By the way, she also has a website.  Sweet!  (Check out the Hobbit and Doctor Who bots!!!  And there's a Cthulhu bot too!  ::melting from the rays of nerdy awesomeness shining out of the computer screen::)

Gosh, it's after 10pm, and I still have a bed to set up for our house guest!  Must get onto that, then head to bed for a cup of tea and some reading.  Sadly, I had to admit defeat and take a couple of books back to the library unread - The Casual Vacancy by JK Rowling, and the second Cliff Janeway novel The Bookman's Wake by John Dunning.  The Rowling has hundreds of requests and there was absolutely no way I'd have been able to read it before it was due back (I've re-requested it and am 833rd on the list).  As for the Janeway, I'll get to it some other time.  At the moment, I'm trying to finish Mockingjay by Suzanne Collins.  My kindle informs me that I'm 66% through it, so it shouldn't take me too much longer.  So much to read, so little time...

Good night everyone.  Have a happy and safe Easter weekend!  Don't eat too much chocolate!  Save room for the hot cross buns ;-)
Posted by kreachr at 22:50