Stuff is getting finished. It's about time.

Huge relief!!!  I got the results from my exam, and I managed to scrape a B+.  Like, the lowest mark for a B+ is 70%, and that is exactly what I got.  Phew!  My overall mark for the paper was an A.  Not quite the A+ I was hoping for, but I'm still happy.  I feel so much better now that paper is finished, and can happily focus on the study I am working on now - The Information Industry, and Library Systems and Processes.  Fun times ahead ;-)  Going to have to crack into the statistics at some point too, as I was planning on studying Statistical Analysis next trimester, eek!

I managed to finish the wedding afghan with time to spare, and because of the lovely warm weather we had last week, it only took half a day to dry.  I was very pleased with the overall result, even though it turned out a little smaller than the recommended size of 64"x56" - mine ended up 60"x54" or thereabouts.  And look, its so pretty! 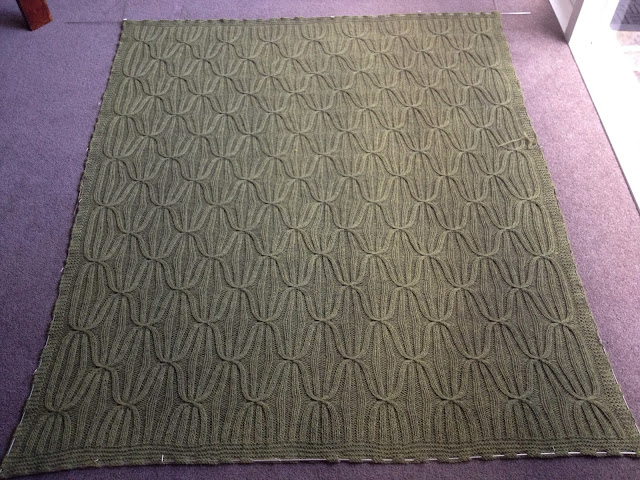 OMG I love these blocking wires!!! 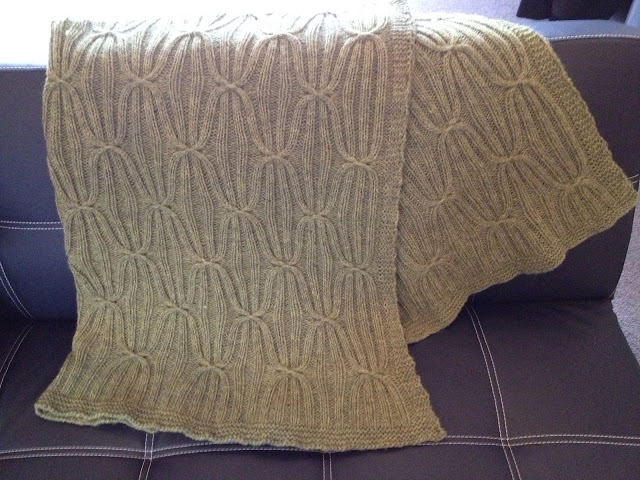 Sadly, the pattern doesn't have a very good name - it is called C224 Cascade Eco + Quilt and Cable Blanket.  Ooh, exciting...  As the name does suggest though, it is a pattern designed for the yarn - Cascade Eco +.  I rather enjoyed working with the yarn, it was lovely.  The colour was beautiful (in fact, I actually bought six skeins of the same colour in worsted for a cardigan) - it's called Turtle.  Cute!  I can only assume the recipients like the afghan, as they didn't open their gift while we were at the wedding for understandable reasons ;-)  By the way, it was a beautiful wedding.  The perfect setting, amazing food, excellent live entertainment... an amazing day.  And my nail polish matched my dress perfectly: 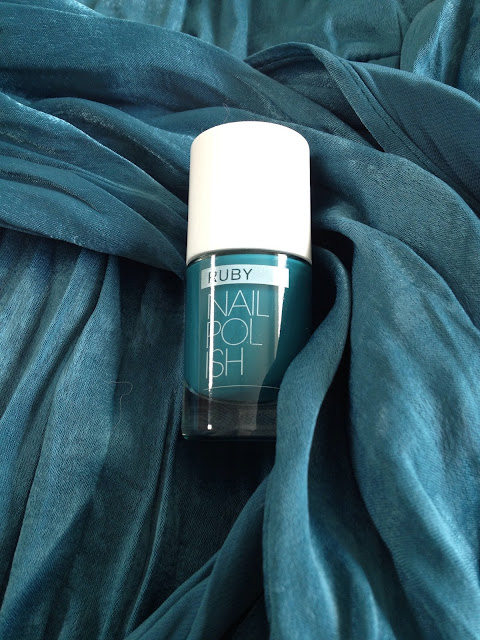 Wizard from Ruby, in case you were wondering ;-)

With the afghan out of the way, I also managed to finish the Round 1 Sock Madness socks! 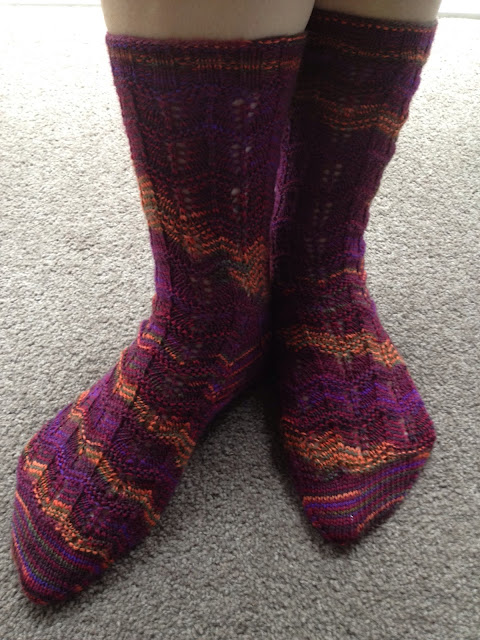 The pattern was fun, really easy to memorise, and very well written.  I quite enjoyed knitting these socks, and although the pattern was intended for variegated or self-striping yarns, it would look really good in a solid or semi-solid as well.  The pattern is Sockdolager, which is the name of a ficticious yarn-eating monster from last year's Sock Madness stories.  I knit these with some Touch Yarns Magic Merino sock yarn in Matakanui.  I had originally intended on knitting Deane some socks with it but I think it's a little loud for him.  He's probably quite relieved... The first round of Sock Madness finishes early tomorrow morning so I was cutting it a little close to the wire grafting the second toe together last night, but they're done and I'm through to the next round.  Not sure how far I'll get this year since I'm quite a bit busier with study, but we'll see how it goes.

Today I managed to dig out my Cassidy hooded cardigan that I had started what seems like forever ago (3rd January, wow).  I'm hoping to actually get it finished before winter!  Not to mention several other garments - Deane's sweater, one each for the kids... maybe I'm being a little ambitious... This cardi will be my fill-in knitting between SM socks, although I may have to cast on a vanilla project for Sunday knitting group.  There's no way I'd be able to concentrate on the cabled pattern while yakking my head off!  That's just asking for trouble ^_^

Speaking of trouble, I've been having a bit of a war with ants this past week.  Every morning I wake up to some level of invasion.  I've got no idea where they're coming in from, as I've sprayed all around the kitchen window and the dining room french doors.  I'm starting to wonder if they're hiding under the house and coming up through a gap in the floor somewhere.  Little buggers.  They haven't managed to get into any food because I've got everything sealed up tight and my kitchen is spotless before I go to bed, so I don't really know why they're bothering.  Oh well, maybe they'll give up soon.  Meanwhile, I've been having a little bit of fun in the kitchen.  I made a batch of hot cross buns sans fruit on Sunday, and they came out really good, if a little dense.  I'm planning on making more but will try a different recipe and see how they turn out.  The kids liked them in any case, so that was a win :-)  I also made the most delicious chocolate brownie, and am now trying very hard not to eat it all!  It's just so good!  As were these ridiculously cute mini hamburger buns: 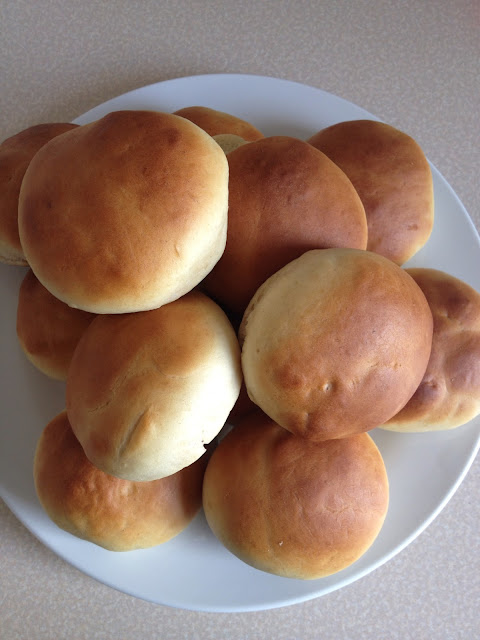 They fit into the palm of your hand, and are the perfect size for the kids.  A little too sweet, but the recipe was really quick and easy so I'll probably make them again but reduce the amount of sugar.  They went really nicely with the barbecue pulled pork I made for last night's dinner: 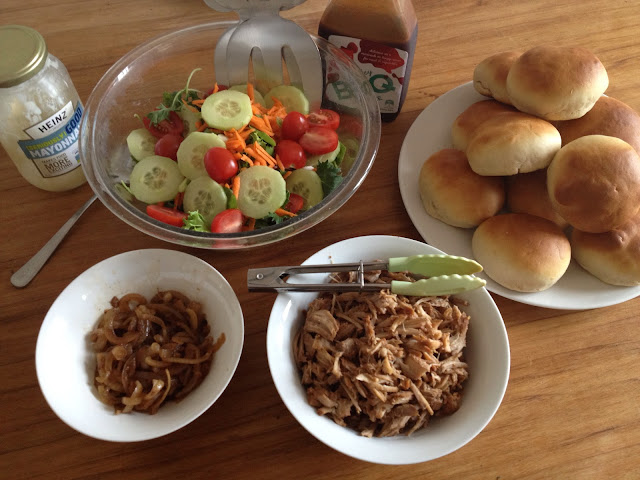 This is the first time that I can remember actually enjoying pork (that wasn't bacon or ham).  I may just have to make this again.  Yum. 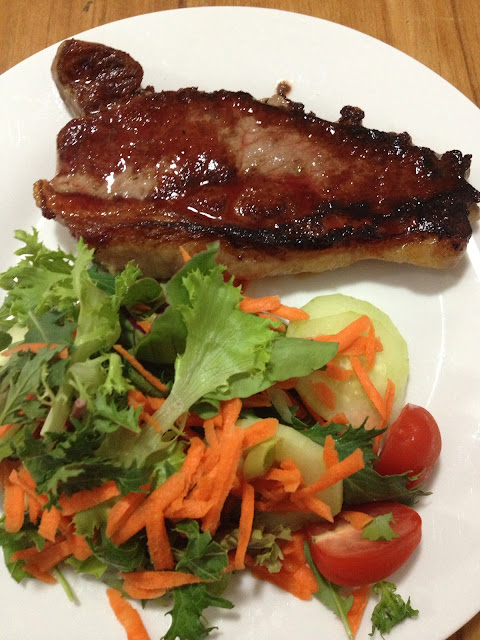 Oh yeah, and salad.  I would've considered the steak too big a piece for me, weighing in at a little over 240g.  But damned if I didn't eat the whole thing (although I did cut off the fat, so maybe it was closer to 220g).  I'll be honest and say I overcooked it a little - it came out at around medium to well done, but it was very tasty.  I will be buying more of this steak for sure - Green Meadows Beef is awesome :-)  Although I really should stop going on about them, lest I become part of their marketing team.  (Seriously, you should check my Twitter feed.)  Tomorrow, roast chicken.  One of my favourite meals.  And the kids actually eat it, which is a bonus.  Fussy little horrors.

Yes, we're eating quite a bit of salad at the moment.  Well, I am at least.  I'm feeling the lack of exercise and copious amounts of delicious food working against me (for goodness' sake woman, stop baking!).  My knee is very slowly (and I mean v-e-r-y s-l-o-w-l-y) improving, so I'm hoping to get out for a short run early next week.  Fingers crossed for me!  I'm trying to be very good and look after it so it heals well, keeping in mind the two half marathons I'm planning later in the year.  Nearly two weeks since my last run... ugh.  I'm rather fixated on the idea of getting a bike trainer now, for various reasons.  Can't believe I didn't think of it before actually.  The roads in Auckland are really not safe for cyclists, even experienced ones.  An experienced cyclist I am not, and I find the roads rather intimidating even during the quiet traffic days, so although I'd love to get out and ride I tend to put it off, and my bike continues to gather dust.  With a trainer though, I can get up early and jump on the bike and watch all those TV programs I'm way behind on, or listen to knitting podcasts (also behind), or just enjoy the quiet before the rest of the household starts the day.  It'll be easier on my knees (poor, much-abused things that they are) and with winter on the way, I'll have no reason not to get my exercise in.  Deane doesn't like me running when its dark, and as much as I love running in the early morning, and even in the rain, sometimes it's not the best idea.  Plus I get wicked earache when its really cold.  So a bike trainer would make a happy kreachr!  Unfortunately it doesn't fit in with the current budget, so I'm trying to sell a few items (text books I don't need any more, and my ice skates because running is more important to me than ice skating which was just for fun) to cover the cost.  Anyone need a computer text book?  A CD book about archives management?  Some brand-spanking new ice skates that have only been used a few times?  No?  Oh well...  I've listed them on Trade Me so hopefully somebody will want them :-)

Well, that's it from me for now.  Organisation stuff is still going well for both me and the boys (I have no idea how we functioned without checklists and schedules, they're awesome), and I am still loving the YNAB budgeting software.  Still geeking out at getting to enter transactions and budget our income.  Fun I tell you, fun!  LOVE. IT.  Right, must go to bed and read before sleep.  Those books ain't gonna read themselves...  Good night y'all!

Side note:  This post has about ten times as many views as all my other posts.  I can only assume this is because it has the word 'breasts' in it...
Posted by kreachr at 21:45