You win this round, universe!

I've been getting back up to speed with my running of late.  Or rather, back up to distance, since speed is sorely lacking at this stage.  Having said that, so is distance... ahem.  Anyway, I decided to go for a long run this morning, then have a rest day on Saturday so I'd be all ready to go for Sunday's Round the Bays.  I told Deane last night that I might be a little later than 7am, so he had to be prepared to get the kids breakfast.  I set the alarm for 5.15 and got my running gear organised, then went to bed around 11pm.  This morning I was out the door by 5.30am and on my way.  About 2.5km in, I tripped on some uneven paving on Quay Street.  In over three years of running, this is the first time I have ever tripped.  What's worse is that the gear I was wearing didn't have pockets so I had my phone in my hand.  Now the screen is badly scratched.  Poos!  Not to worry, I quickly checked to see it was still working (it was), got back up and headed on my way again, thankful that at 5.45am there aren't many people around to see you make a dick of yourself.

As I kept running I noticed that my left knee, which took most of the impact, was rather sore.  'Walk it off' I thought.  Or run, as the case may be.  I had plans to run 15km, and I'd be damned if I was going to turn around so early in the run and go home when I'd made the effort to get up at 5.15!  I kept on running, albeit at a slightly slower pace, all the way to my turnaround point where I stopped ever so briefly.  By that stage my knee was really sore!  I bent down to check it, and there was a rather huge bump sticking out.  Oh dear.  I started hobbling back the way I had come, got to about 8km, and decided to take a walking break because the pain was starting to radiate out from my knee all the way up my thigh (to meet the slight pain from my snowboarding injury that still hasn't quite healed), and on down my shin.  I walked for 1km then started up running again.  I hadn't quite got to the 10km mark when I had to admit defeat and resign myself to walking the rest of the way home.  I sent a few texts to Deane in the hope that they would wake him up, knowing full well that I wouldn't be home before 7.30am.  I didn't have any change for the bus, nor any cash for a taxi.  I briefly considered calling Deane and having him come pick me up, but that would involve dragging both kids out and dealing with early morning traffic.  Um, no.  So I set myself to limping home under my own steam, unable to bend my knee at all at this point.  I finally dragged my sorry butt in the front door at about 7.45am.  Did I get any sympathy?  No.  I got in trouble for scratching the crap out of my phone screen.  "I've been telling you for ages to put the protective cover on your phone, haven't I?".  Yes Deane.  Thank you Deane.  Oh I'm fine Deane, thanks for your concern.  Pfft.

I was very fortunate to be able to get a walk-in doctor's appointment at 10am.  He diagnosed my injury as prepatellar bursitis, and (hooray for small mercies) no other damage, prescribing rest, lots and lots of ice, and anti-inflammatories.  Unfortunately, he also said I can't run for at least a week.  Sigh.  Deane will be running on his own at the fun run on Sunday now.  Hmm, I wonder if I could walk it...?  I'll see how it feels on Sunday morning I guess.

I'm starting to wonder if somebody's trying to tell me something - 'slow down and let things heal before you run some more'?  Or, 'sit your ass down and finish that afghan, the wedding is next weekend'?  Maybe it's 'hey, you've got heaps of books out of the library, maybe you should sit down and read them all before they're due back'?  Or even 'finish those assignments, you'll feel much better once they're done.  And by then the results of your exam should be up, so in the meantime stop compulsively checking the bloody website!!!'?.  Who could really say?  It may just simply be me going through a clumsy, uncoordinated stage and I need to watch where I'm going rather than daydreaming while running.  Guess I'll never really know.  I will, however, take this time over the next several days to finish the wedding afghan (only three more repeats to go, hurrah!), and start (and hopefully also finish) the first pair of socks for Sock Madness 7.  Oh yeah, by the way, Sock Madness is on again!  Woohoo!!  And I do have rather a few books I want to read at the moment.  I'm currently reading Booked to Die by John Dunning.  It was referred to in some course readings for one of my papers and it sounded interesting.  After that is The Bookman's Wake, also by John Dunning.  Then there's Running Hot by Lisa Tamati (I just finished her other book Running to Extremes - that woman is crazy!  But very inspirational).  I have The Casual Vacancy by JK Rowling sitting there as well.  I've heard mixed reviews, so want to read it myself just for curiosity's sake.  There's three more books on request at the library, and I'm part way through The Hobbit by JRR Tolkien, Mockingjay by Suzanne Collins, and The Hitchhiker's Guide to the Galaxy by Douglas Adams.  Hmmm, reading ADHD...

Also suffering (although I'm not sure 'suffering' could be deemed the correct term here) from a little bit of food ADHD.  I said a sad goodbye to my sourdough starter.  As much as I loved it, and it was a good little starter, Deane and the boys preferred the other bread I was making before the sourdough.  They enjoyed the pancakes and waffles, but that isn't enough of a reason to keep a starter going so I made a big batch of crumpets with the last of it: 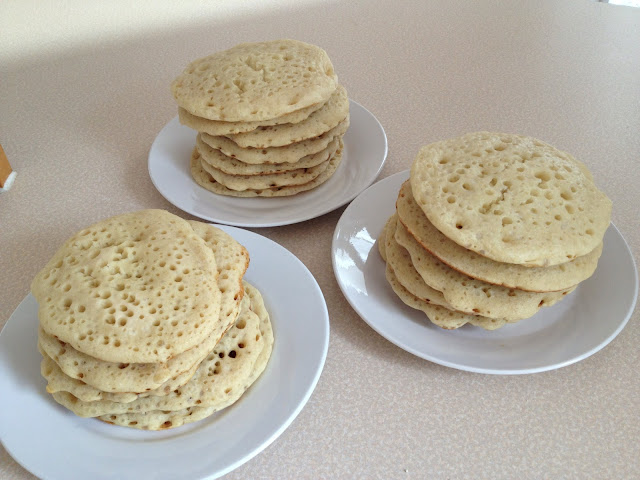 Yum!  I luuuuuurve home made sourdough crumpets!  These have been put in the freezer for breakfasts over the next month or so.  I also have about the same amount of sourdough waffles.  I'm good for a while :-)  Then I made a loaf of the crusty bread my family enjoys so much.  For some strange reason, it came out a little heart-shaped: 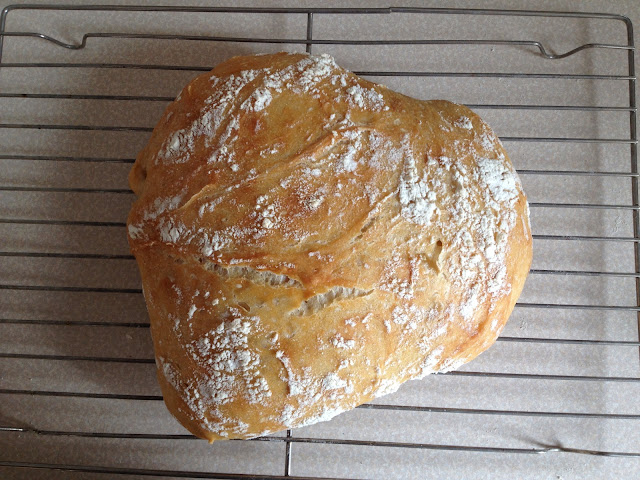 Cool, huh?  That same day I was starting to feel a little starch-heavy, so I had a fruit salad for lunch: 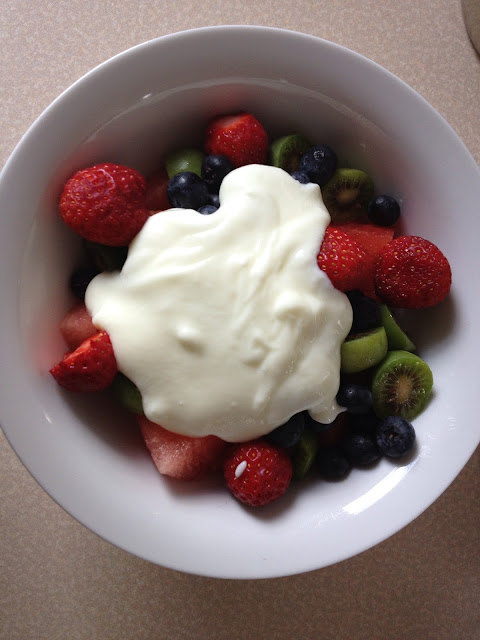 Watermelon, strawberries, blueberries and kiwiberries, with a big blob of home made natural yoghurt on top.  Omnomnom!!!

We're enjoying all sorts of meaty goodies too, working our way through the Green Meadows Beef stores we have.  Last night we had beef olives a la Edmonds Cook Book.  They were awesome.  The angus schnitzel was lovely!  Sadly though, beef olives are ugly beasts, so not overly photogenic.  I did snap a pic though, because the meal was rather good: 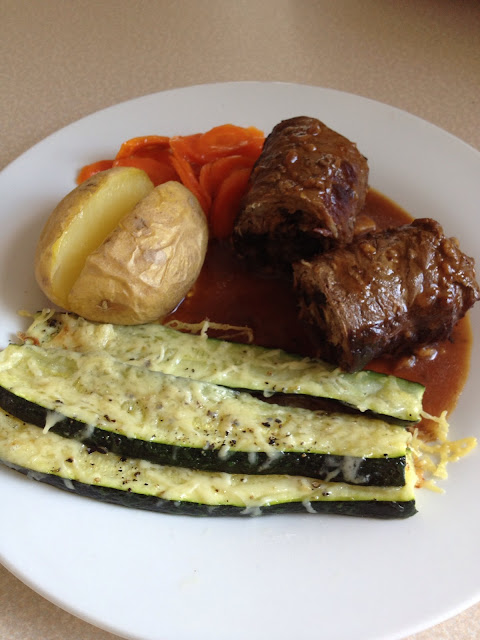 Oven-baked potatoes with ridiculous amounts of butter smooshed in the middle (it's all melted already, mmmmmmm), beef olives with gravy, honeyed carrots and parmesan baked courgettes.  Yum!  The night before we had lasagne and salad, the night before that was seekh kebabs with minted garlic yoghurt, cauli rice and home made naan bread (OMG sooooo good!  I don't think I'll ever buy it pre-made again, the kids loved it!!  I am the bread queen! Haha ^_^), and the night before that was whole baked snapper with wedges.  I made a coating for the wedges with a little flour, paprika and salt and pepper so they were nice and crispy.  Delicious.  Tonight, we're having crockpot coconut chicken curry.  I'm being lazy today and using store-bought roti bread instead of making it, but that's okay, I'm supposed to be resting and icing my knee ;-)

This weekend I have plans to give hot cross buns a go.  I love hot cross buns, but it's hard to find a brand that doesn't put the gross citrus peel in them.  Ugh.  Also, I'd like to be able to make some for the kids without sultanas.  They like hot cross buns, but not the sultanas.  Chocolate hot cross buns, while rather divine, are hard to come by, so perhaps I'll make some of those too.  I am happy to say that I am no longer scared of baking with yeast.  It used to intimidate me, and I would leave it up to Deane to bake anything yeast-based, as he had so much more experience with it and seemed to know how to make it 'work'.  But after having made so much of my own bread of all different kinds, a lot of pizza bases, and successfully creating and nurturing a sourdough starter with nothing but flour and water that created many delicious bread products, I think I can say I've got the knack :D  Home made hot cross buns, here we come!!

I hope you have a good weekend.  Mine will be spent mostly on the couch, I imagine.  I got a little pissy with the wedding afghan the other day, when it did this to me: 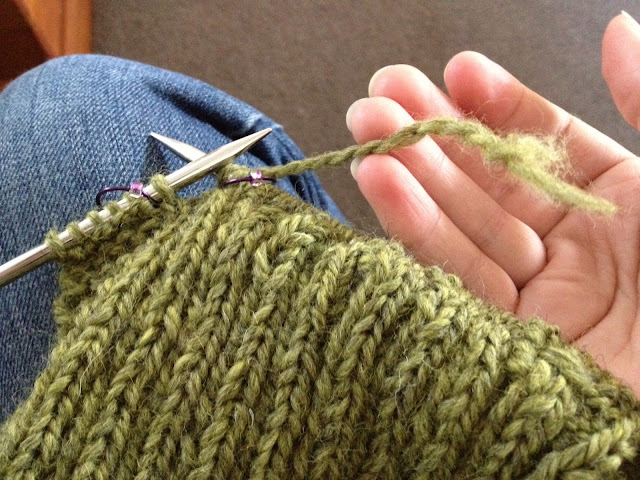 Know what that is?  The end of the yarn skein, six stitches from the end of a 220 stitch row.  Six stitches!!!  That's just bad manners really, isn't it?  Still, three more repeats and it's done!  I'm looking forward to finishing it, because it's so big now that it gets very hot working on it, with the bulk of it sitting on my lap.  It's still summer weather!  Why did I think this would be a good idea?!?  Then, the dreaded blocking.  I don't think I have enough blocking wires :/  It'll be nice to get it done, and I can spend plenty of that time with my feet up, icing my knee.  Hopefully that will help it become a little more mobile so I can walk 8.4km on Sunday.  Maybe.  There is a strong possibility I will be sulking just a little bit on Monday...
Posted by kreachr at 15:02