I made broccoli salad last night for dinner, to go with our fish.  Dude.  It was awesome.  Chop up a head of broccoli into bite-sized pieces and blanch it for a couple of minutes.  Drain well and throw into a bowl with a large handful of coarsely chopped cashews and a large handful of dried cranberries.  Finely chop half a red onion and add that.  Fry (or bake, or grill) 2-4 rashers of bacon (depending on how much you like your bacon, or how much you have in your fridge) chop it up and add to the bowl as well.  Then mix together 1/8 cup mayonnaise, 1/8 cup yoghurt, one tablespoon apple cider vinegar and half a tablespoon sugar, pour over broccoli mix and stir well until combined.  Refrigerate until needed.  Yum!!

What's also yum is this banana and coconut milk bread.  Which, as the blogger that posted this recipe says, is really just a cake masquerading as bread in the shape of a loaf.  Although it is good sliced up while still warm and slathered in butter.  Mmmmmm...

And since we're on the subject of yum, dinner tonight kinda rocked.  Deane had bought some chicken legs a little while ago.  This is not my favourite cut of chicken, but I decided to do something a little different with them.  We had 'hobo dinners' (idea filched off Pinterest) - Deane and I had a chicken leg, potato, half a corn cob, half a beetroot, half a carrot and a few cherry tomatoes wrapped up in a foil parcel each with some butter, salt and pepper, paprika and turmeric.  The boys just had chicken and potato (boring!).  I baked these for an hour at 180, then turned the oven up to 220 for 20 minutes before taking them out.  It was a bit like an oven-hangi ;)

Moving from eats to feets, I have blue toenails: 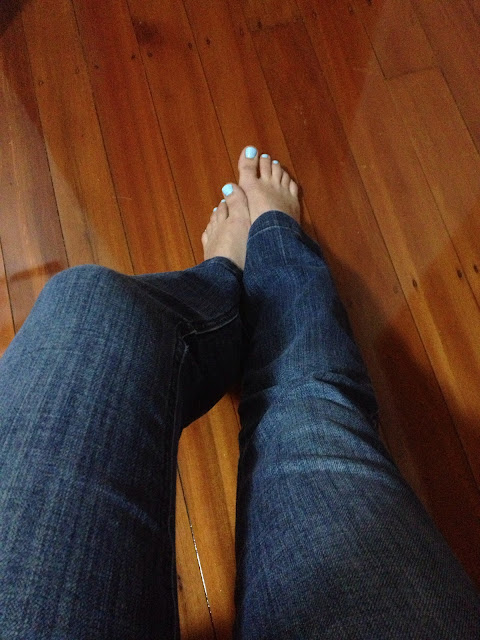 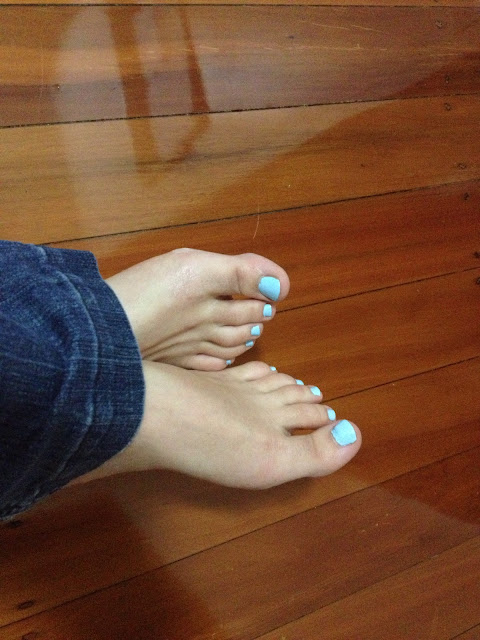 And short legs, as evidenced by the picture at the top.  But we already knew that.  Also, my left big toenail is still mangled-looking under the nail polish.  That's why I keep painting my toenails :)  Wonder what colour I'll do next...?

Last but not least, the round three pattern specs for Sock Madness are up.  Pattern release any time now!  Exciting!

Okay, so that turned out to be more than four things.  It's Sunday.  My brain doesn't work on Sundays.  I'm gonna go knit now.  See ya!
Posted by kreachr at 19:13