Yes, it's that time again.  School holidays are not my favourite time of year, but they seem to be getting a little easier.  Whether that's just my way of looking at them, or if it's that the boys are getting older and easier to handle (ie: they amuse themselves and just need to be fed and watered occasionally), I couldn't really say.  It would be fun to go out and do stuff, but past experience has taught me that 95% of the time, they're not interested.  Even when you do get them enthusiastic enough to go somewhere, within half an hour they're asking if it's time to go home yet.  So I won't complain, and take the time this week to work on my Cassidy cardigan (onto the sleeves!) - here's a pic of the three body pieces: 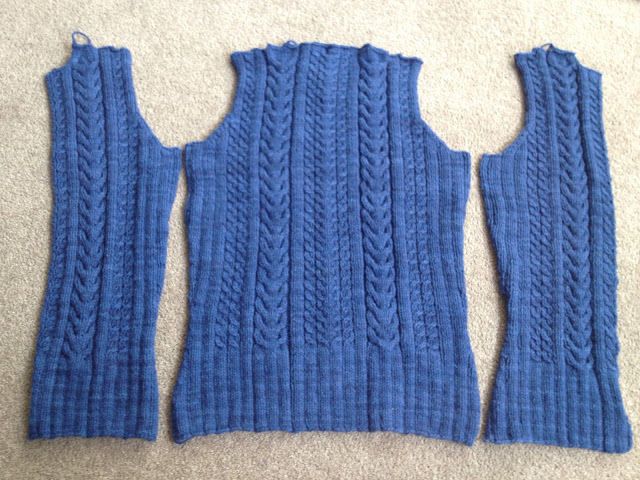 And maybe knit some other stuff.  Perhaps get a start on Deane's sweater, or one for the kids.  It is now well known in Sock Madness circles that the next pattern out is going to be the optional round, so I'm not overly concerned about knitting that one.  It depends on whether I like the socks or not, which I won't know until they release the pattern.  Having said that, sweaters are higher on the priority list at the moment so I might just give this year's optional round a miss.

I will also have time to watch a few TV programs I've been wanting to catch up on.  The tough decision is figuring out which ones to watch, I have such a long list!  Maybe New Girl and Revenge, or Once Upon a Time...

My 30 day squat challenge is going well.  Today is a rest day, but yesterday was 80 squats.  It's still not very challenging, but I'm sure that will change soon.  In the next few days we're getting into triple figures!  The 30 day BodyRock challenge is also going well - the weekends are 'active rest' days, so no workouts to do.  Saturday was a lazy day - I just did the 75 squats and that was it.  Yesterday I fit in a 7km run (which was supposed to be 6.5km but I over-shot so figured I'd just keep going to round out the number) as part of the 10km training program for the week, which is also going well, in case you were wondering ;-)  That made me feel a little better about eating the breakfast I'd made.  We invited a couple of friends over for coffee and artery-clogging breakfasty goodness - I made peaches and cream french toast.  Dude.  It was awesome.  I only made a half batch and that was more than enough for four adults.  Actually, it was probably too much.  But oh, it was goooooooood.

In fact, there was a lot of good food to be had over the weekend.  On Saturday morning we had pancakes, then I made scones with jam and whipped cream for lunch.  Dinner was lentil sloppy joes (store bought buns, I got lazy) and dessert was self-saucing chocolate pudding made in the crock pot (although I made the standard version, not the gluten/dairy free one).  So yum!  Sunday morning's breakfast, as already stated, was fantastic.  Lunch was fruit salad at Mecca Chancery while I was at knitting group (and half a bowl of Kate's fries that she didn't want), then dinner wasn't anything special - sausages and baked potatoes.  But what I did like about dinner was the garlic roasted brussels sprouts.  I added in some cherry tomatoes for a bit of colour and variation, and they were rather delicious.

This morning's breakfast was chia pudding, made with coconut milk.  I served it with sliced banana and agave syrup.  It was really nice, but I've discovered that coconut milk is one of those things that causes havoc with my IBS.  I had a sneaking suspicion that it didn't agree with me and this morning confirmed it.  Oh well, guess I'll just have to be careful about how much coconut milk is in things from now on.  I find it weird that I have almost no problem with dairy, yet coconut milk is an issue... hmm... everyone's different I guess.  I made Deane some pickled ginger and salmon onigiri for lunch today, and sent him off to work with that and some edamame.  And here's what we're having for dinners this week: 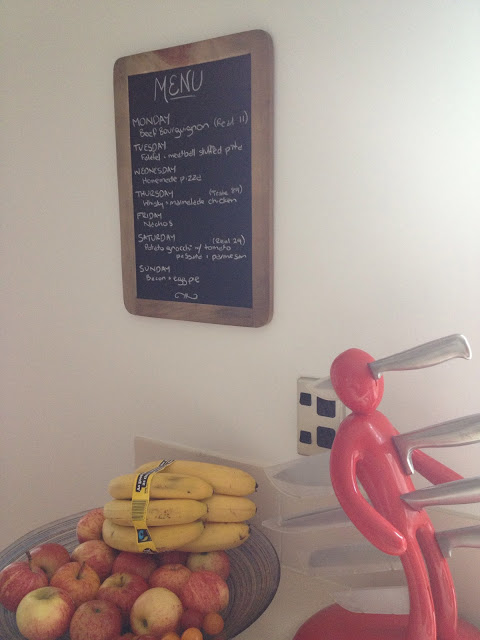 How do you like my blackboard menu?  Cool, huh?  Got it at Typo for $25.  Not sure if you can read it very well, but tonight is beef bourguignon.  I've only ever made it using one of those Maggi packets but it was always a favourite when we were flatting.  I haven't made it for years so hopefully tonight's batch works out well.  Just need to hunt out some red wine...  I'm looking forward to Thursday's experiment - whisky and marmalade chicken!  I've already asked Deane which whisky I can use out of his ridiculously expensive, good quality collection.  Might need to feed the kids something else for dinner that evening though, as I doubt they'll enjoy it.  Chicken nuggets to the rescue again ;-) 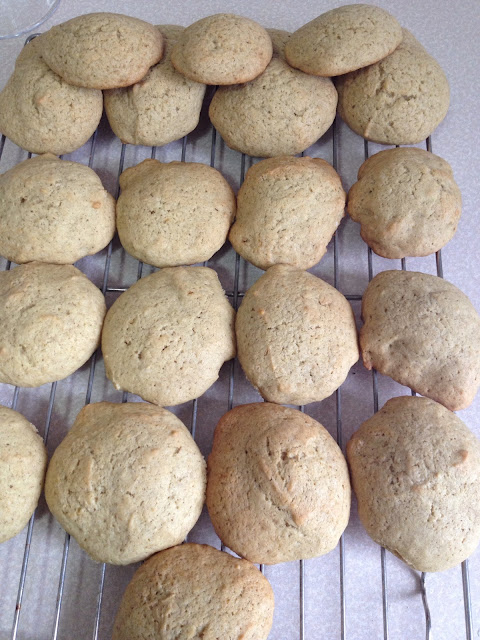 And sun-dried tomato breakfast couscous (also yum).  Next on the list of things to try are Brazilian cheese breads (although I'll use wheat flour, hope it works okay!) and coconut pecan quinoa granola.  I love trying new things!

My 'cleaning calendar' and daily routine is starting to slip a bit.  Last week I spent a lot more time in the kitchen (see evidence above), and more time on exercise and study with less time doing housework.  Starting to get a little slack.  I'm pleased to announce though, that we have finally used up the crappy 'home made' dishwasher powder, and are now back to the store-bought stuff.  Wow, it's amazing how much cleaner my dishes are!!  Lesson learned there! One thing I'm not letting slack this holidays is the kids and their chores.  We've managed to get a pretty good system in place and they're getting things done with only a little bit of complaining (maybe it's the pocket money incentive).  Rather than wasting paper printing out a list for them to tick off each week, I've set up a different type of 'chores chart': 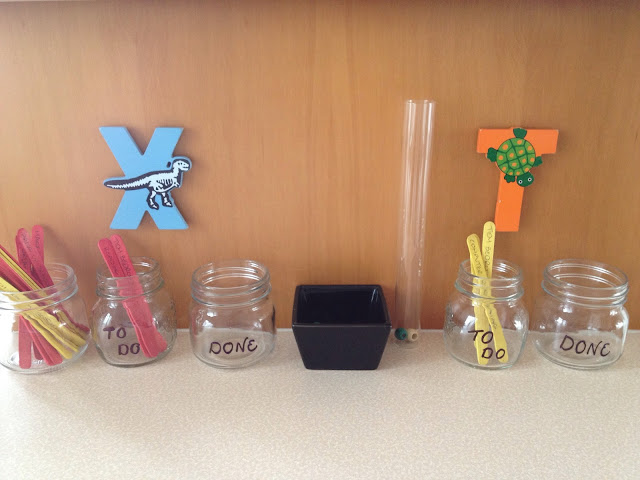 Each stick has a task written on it - some for the morning, and some for the afternoon/evening.  When they've completed a task, they move the stick to the 'Done' jar.  Once all their sticks are moved, they put a bead in the tube.  At the end of the week (we don't count weekends) if there's ten beads in the tube for each kid, they get their pocket money.  Today was the first day for this new system (last week was still paper checklists) and they completed all their morning jobs and got a bead.  This afternoon's jobs are now in the 'To Do' jar ready for later on today (the jar to the left is all the other chores to choose from for the morning or for school days).  The good thing about this system is that I can take it with us to Napier next week when we go visit family.  Haha, no escaping!!

Right, enough waffling.  Time to get stuck into other stuff for the day.  I've cleaned up a section of the laundry, throwing out a bunch of random stuff we don't need (Deane has no complaining rights - he's had plenty of warning!!) - now I can get to the freezer and the laundry sink without having to climb over stuff.  Win!  Next up, BodyRock workout, the vacuuming, and lunch.  Then a spot of knitting while contemplating what to make Deane for his birthday breakfast in bed tomorrow morning.  Decisions, decisions...
Posted by kreachr at 11:00