Some things just don't work out

Like those socks I started last week.  You know that tiny wee dropped stitch in the middle of the instep?  Yeah.  I went to fix that the other day, pooped it up, and really couldn't be bothered putting the effort in to fixing it properly so just frogged the whole thing.  I'll start a different pair of socks with the yarn instead (there's a Harry Potter Knit-Along with some Tonks inspired socks this month, so I'll probably do those).  Speaking of projects going to the frog pond, remember this stole I started some time last year? 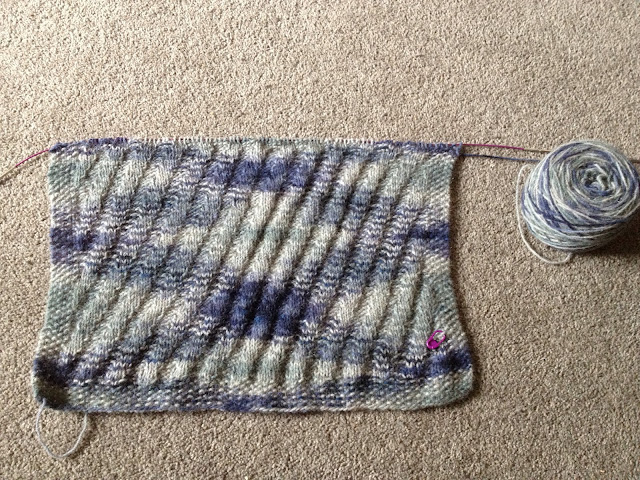 I just wasn't feeling the love for it, and had absolutely zero desire to pick it up and keep knitting it, so that got ripped back to nothing.  Life's too short to knit bad stuff, right?  The yarn is deliciously soft though (yay for possum fibre!) so I think it'll have to be a cowl or something for winter, but there's nothing grabbing my attention right now, so perhaps next winter...  I still have many sweaters to knit! ;)  I haven't knit anything for a couple of days though, so I haven't made any progress on my cardi.  And just to remind me that winter is on the way and I'm running out of time, the weather has started turning.  It's been raining a bit lately, and the temperatures have dropped making socks a part of the standard stay-at-home wardrobe, along with a cardi.  I'm certainly not complaining!  Autumn is my favourite season, and I love snuggling into warm clothes, or sitting on the couch with a hot cup of tea, a book or some knitting, cosy warm under a blanket.

And the trees are turning too - I adore walking down the street and seeing all the beautiful colours of the leaves, and every tree is different.  I can't wait for next week when I can (hopefully) get out and run again.  An early morning run in the crisp, cool air with autumn leaves on the trees all around... there's no better way to start your day.  I'm smiling just thinking about it :)

I missed out on a couple of things this weekend that I would've liked to have done - the Warrior Dash was on yesterday, as was the Oxfam 100km trail walk.  As you know I had intended to do the Warrior Dash, and it would've been a lot of fun I'm sure.  The photos from the day looked great!  Maybe next year.  A friend of mine was participating in the Oxfam 100km this weekend, held in Taupo.  He and three friends set out yesterday morning at about 7am and walked a full 100km through all kinds of terrain - footpaths, farm tracks, bush trails, hills, parks, roads... you name it, they walked it.  I think they finished around 2am or thereabouts.  I imagine they're enjoying a well-deserved rest right now so I can't confirm.  Their team raised over $3,000 for the cause.  This may sound odd, but I'm a little jealous.  I'd have liked to have been a part of the team, and walked with them.  I remember seeing a billboard advertising the Oxfam walk some time ago - it was on my usual running route along Tamaki Drive.  At the time I thought it would be cool to do (and what better cause?) but couldn't think of anyone else that would be crazy enough to walk 100km with me, and you need a team of four.  Perhaps next year I'll put in a little effort and see if I can round up some people (or see if I can worm in on a team with somebody else!).

I did end up making my own laundry powder and dishwasher powder in the end.  I figured that since I'd already bought most of the stuff I might as well use it, so found the cheapest source of borax on Trade Me, bought 2kg of it, and made up a batch of each.  Just have to say, the dishwasher powder sucks ass.  I've read many comments on various websites that tout this as the best dishwasher powder ever, and many have said that it didn't work very well until they'd changed their rinse aid to just white vinegar.  I've done this.  It still sucks.  So I'll be using up the batch I've made, then going back to the (just as cheap, if not cheaper) store bought dishwasher powder.  I have slightly higher hopes for the laundry powder though, as there's a little more substance to it (plus, a friend of mine has been using homemade laundry liquid for years and swears by it.  If its good enough for her, it should be good enough for me).

Some things do work out though.  Like me (ahaha).  I've been having fun trying all sorts of different workouts with my Nike Training Club app - I'm going through all the beginner workouts at the moment, and they're hard enough.  Can't imagine what the intermediate and advanced ones are going to be like!  They're fun, and only take 30 minutes (unless it's a 15 or 45 minute workout of course).  Easy to do in the lounge.  Sometimes I have to jog, so I do laps around the lounge, dining room and front hall.  The kids think it's funny ^_^  And I've watched one whole Harry Potter movie while cycling on my bike.  In bits of course.  No way I could sit on that bike for over two hours in one sitting, I'd get horribly bored, regardless of the movie!  It's a pity you can't knit and cycle, or I'd probably spend more time on it.  Even reading and cycling is too hard - holding the book or kindle gets awkward quickly.  Listening to podcasts or audiobooks is okay, but there's nothing to look at.  Therein lies the advantage of outdoor exercise - changing scenery ;)  Two more sleeps until my next physio appointment...

Our freezer was getting low on supplies, so I put in another order for Green Meadows Beef.  Two days later, before we'd even woken up, 20kg of delicious beef was delivered to our doorstep.  In case you're wondering, this is what 20kg of beef looks like: 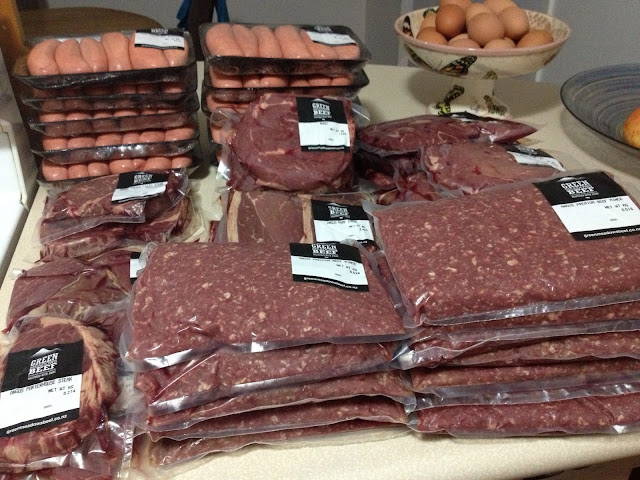 That should keep us going for a while!  5kg of sausages, 6kg of mince, a whole big pile of steaks in various forms, and a roast.  Yum!  I'm looking forward to planning meals for next week!  Yes, we do eat other meats.  We had fish last night, and we're having chicken tonight.  By the way, those lentil sloppy joes the other night were a-ma-zing!!!  And there's enough for two more meals in the freezer (although Deane pillaged a bit out of each container.  Guess he really liked it...)

This morning's batch of pancakes worked out pretty good too.  I've been trying different recipes, to find the one I like the best.  Certainly no complaints from anyone this morning!  Although I do seriously wonder about the Americans and their salt intake.  Seriously, every recipe I've come across for pancakes (and many other foods) have had ridiculously high salt content - this morning's pancake recipe called for a teaspoon of salt!  I put in a quarter teaspoon, and still would've been happy with less. Like, a pinch of salt would've been plenty.  Still, they were rather delicious.  I don't think our quart jug of maple syrup will last us much longer though: 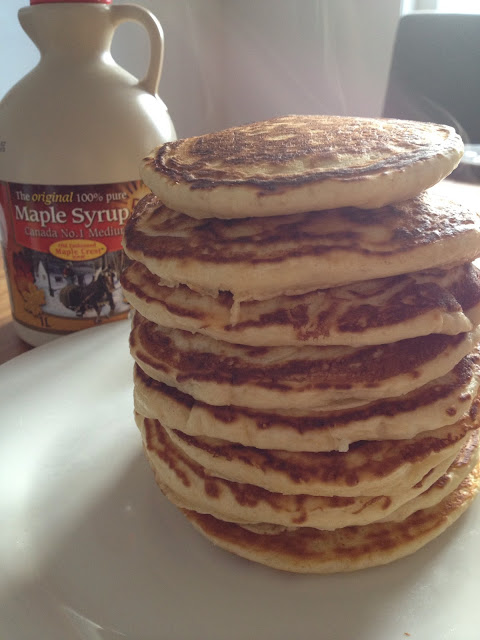 Oh yeah, look at the steam rising off that stack!  Yummmmmmmmmm..... 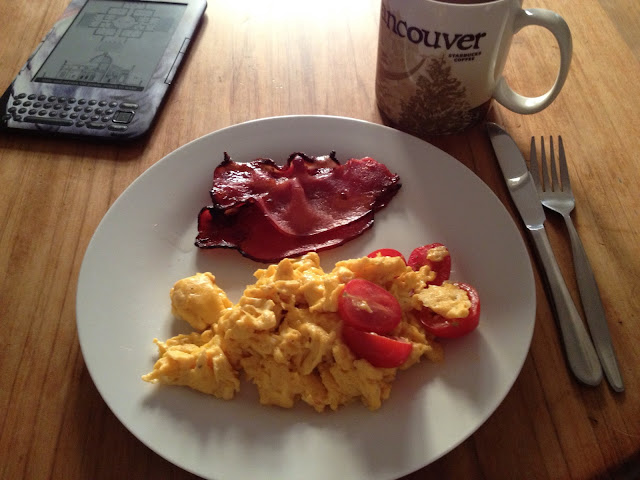 Good ol' bacon and eggs (with cherry tomatoes) and a giant cup of tea with a good book to read (Fool Moon by Jim Butcher).  Deane (the spoilt sod) got his breakfast in bed.

Now, if that wasn't enough to brighten your day, I'll leave you with a parting shot that never fails to put a smile on my face, and even makes me giggle most times I see it.  This is my new screen shot on my phone - both the lock screen and the background wallpaper.  Love it! 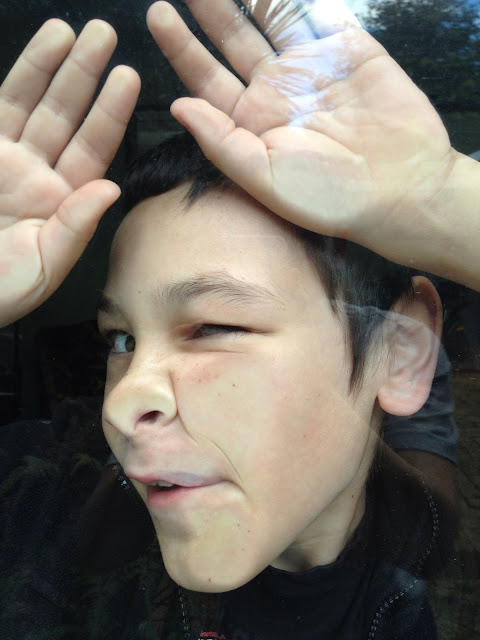 Enjoy the rest of your weekend!  I'm off to do some grocery shopping, and then knitting with friends over lunch.  Ciao!
Posted by kreachr at 09:24