For once, Mother's Day was a success.  The family didn't forget!  I got breakfast in bed consisting of a large cup of tea, a toasted cheese English muffin with cream cheese and berry sauce (interesting... ), and a fresh fruit salad with yoghurt and more berry sauce.  Of course, Deane and I had discussed the previous evening how the morning would proceed, as I had planned on going for a run.  I was informed that the children were looking forward to bringing me breakfast in bed and would be most upset if I was up before them.  So at 6.30am I snuck quietly down to the kitchen to turn on the oven for Deane so he could bake the loaf of bread for the morning, then slipped back into bed and waited patiently for everyone to wake up, go downstairs to make my breakfast and bring it up to me.  I got bored and pulled out my kindle once they'd gone down, but put it away again when I heard them coming up the stairs.  X had made me a card, and T had made some neat little paper puzzles at school in a wee parcel.  Very cute!

After breakfast I headed out to Cornwall Park for a bit of an 'off-road' run.  I had been around the sheep track there a couple of weeks ago with a friend and thought I knew where to go.  Turns out I didn't, and I got rather lost!

I was supposed to run 11.25km, and ended up running 12.5km - oops.  But it was an excellent run and I thoroughly enjoyed it, despite getting stuck briefly in a paddock full of cows surrounded by an electric fence.  Don't ask me how I managed it, I'm not entirely sure myself!  The second lap around the park included a run up One Tree Hill, where I snapped a few pics of the stunning view.  It was a beautiful day: 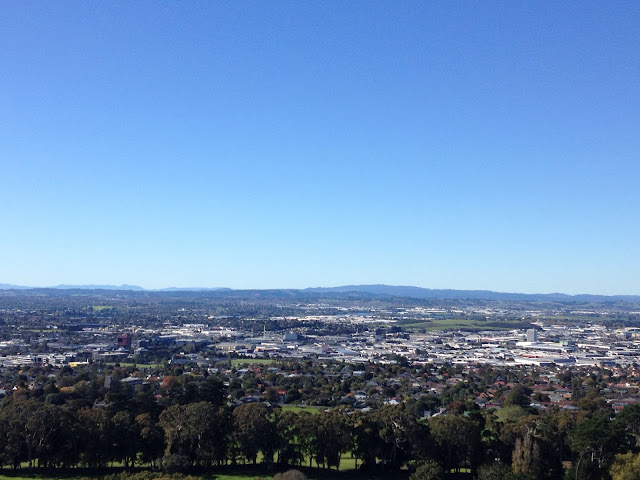 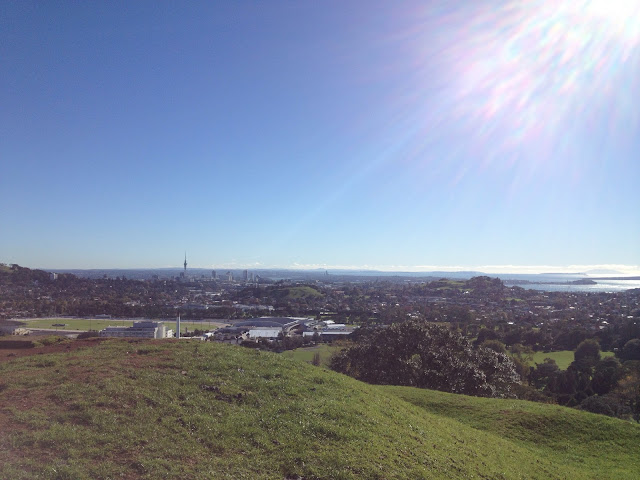 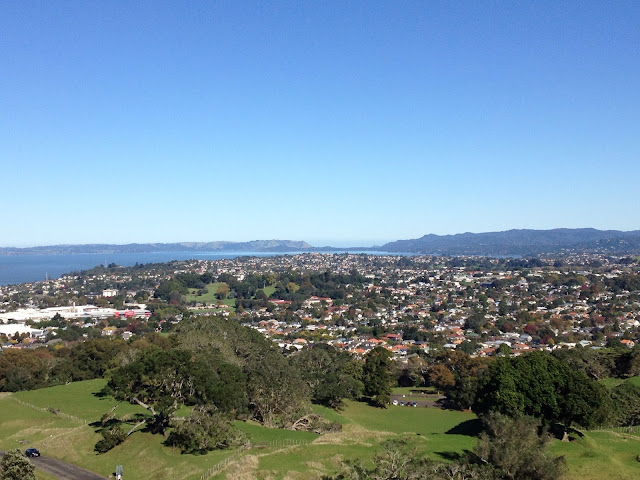 I enjoyed the run so much, I think I might do it again next weekend.  In a slightly less meandering fashion of course ;-)

When I got home, I had time to squeeze in my ab challenge for the day before a quick shower, then dashed off to knitting for the afternoon, where I had a lunch of fresh fruit salad and yoghurt, sans berry sauce ;-)  Nothing else on the menu appealed, particularly as most involved some form of bread, or the portion size was too large.  To be honest the fruit salad was ridiculously huge, but it's fruit so who cares?  Between knitting that afternoon and when I got home that evening (Deane had cooked dinner - Moroccan chicken, woohoo!), I managed to finish the wee shrug cardigan I was knitting for my niece's birthday: 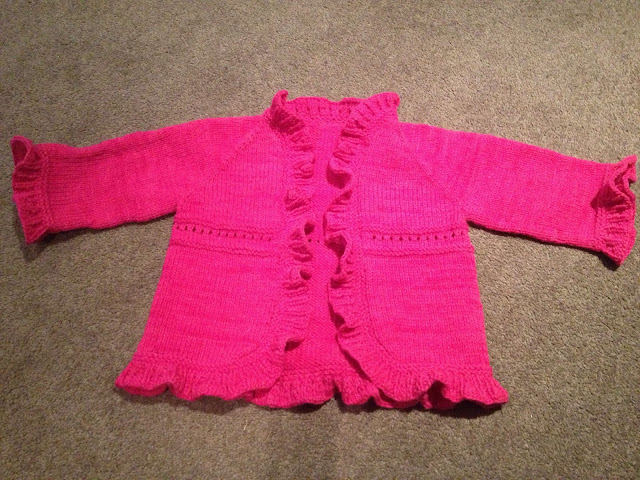 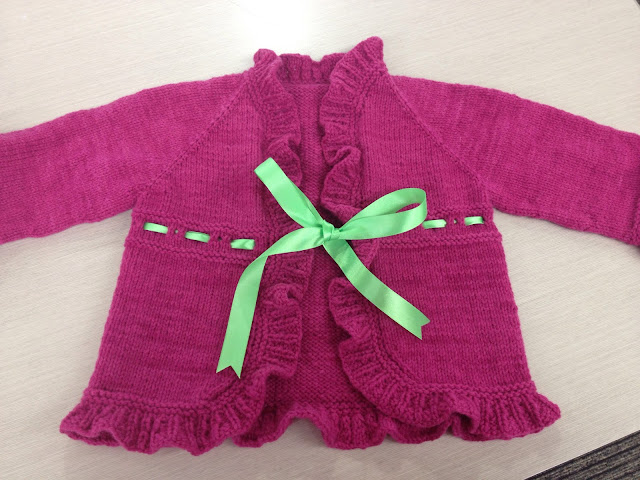 Day pic, with ribbon - snapped quickly at NZ Post before wrapping and sending

I couldn't decide on a ribbon colour, so got two colours and wrapped the rolls in with the cardi.  That way the ribbon can be changed to suit, or when it gets all frayed at the ends as ribbon often does.  I hope she likes it, and I hope it fits!  The pattern is Saffron by Elena Nodel, knit with Knitsch Delft DK (from Holland Road Yarn Company) in 'Rose', from the Bigger on the Inside yarn club.  I knit the shrug length, with 1/2-3/4 length sleeves.  It was a relatively quick knit, only taking me six days.  What took the longest was the ruffle edging around the body of the cardigan - by the time I cast off, there was somewhere between 500 and 600 stitches.  I kept losing count and gave up after a while.  Still, it was fun to knit and the pattern was very easy to follow.  And I got it finished in plenty of time, hurrah!  Next, I think I'll go back to the Cassidy cardigan and finish that off before casting on Deane's winter sweater that I have finally decided on a pattern for.  And no, it's not because it is a 'Twilight' pattern, it is because the sweater is fairly plain (I'm probably going to omit the seed-stitch textured patterning at the top), is V-neck, and knit in the round.  And there's a size that will fit Deane's... larger proportions ;-)

Round four of Sock Madness is upon us, and I cast on the sock on Saturday.  I knit the toe and part of the foot before deciding that a) I didn't really like it; b) there was a mistake I'd made that I couldn't be bothered fixing; and c) I have more important things to be doing at the moment, like writing a 2,000 word assignment that's due at the end of the month!  So, after some deliberation, I decided to frog the sock and gracefully bow out of the competition for this year.  I don't think anyone on my team is complaining ;-)

Ooh, now I promised to tell you how the Foodbox went that we got last week.  Well!  Delivery was right on time for that evening's dinner, so once I'd unpacked the box I quickly pillaged some of the broccolini and a carrot: 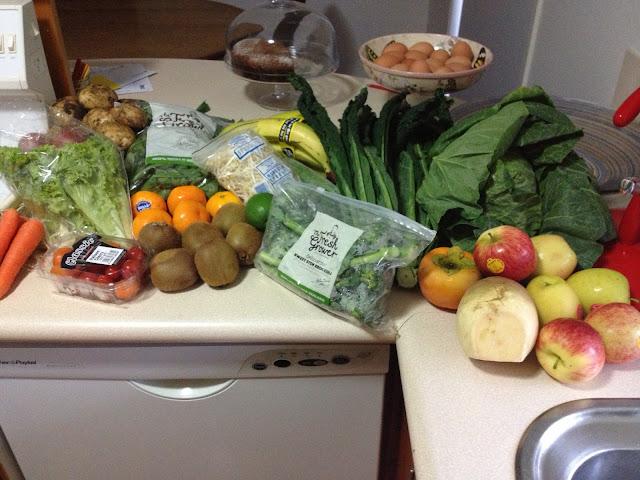 I love the minimal packaging that goes into it: 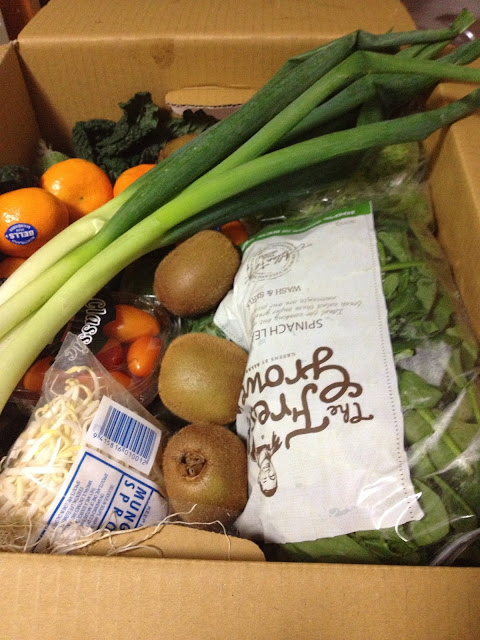 Only the things that need to be packaged, are (spinach, mung bean sprouts, cherry tomatoes, lettuce and broccolini) - everything else is just put straight in the box.  They also ask that you leave the box out for them to collect when they next deliver, so they can re-use it.  Awesome :-)

Over the course of the week, I have made marinated kale and chickpea salad (yum!!), mung bean sprout stir fry (also yum!), vegetable soup (a winter staple - soooooo good!!!), and some spinach and feta mini muffins, which were not so flash.  I followed the recipe in the latest Real magazine and there's either a typo or somebody has some weird tastes.  The recipe called for 3/4 cup of brown sugar, which made the muffins both sweet and savoury.  Very odd, and I couldn't decide if I liked it or not.  Deane was a little on the fence, then decided that he fell in the 'don't like' category, so I ended up giving half away, and chucking the rest.  Oh well, perhaps I'll have better luck next time.  I'm going to make fried cabbage (minus the bacon) to go with some smoked fish cakes for dinner tonight (hopefully the smoked fish cakes recipe in the same issue of Real is better - fingers crossed!), and since the persimmon wasn't quite ripe enough when it arrived, it's still sitting in the fruit bowl.  I'm going to make a persimmon, feijoa and apple crumble for dessert.  Should be good!

Tomorrow's delivery will have new season potatoes, carrots, brown onions, broccoli, butternut pumpkin, parsnips, brussels sprouts, Oyster mushrooms, spring onion, shanghai cabbage, cherry tomatoes, leek, fancy lettuce, rose apples, granny smith apples, packham pears, gold kiwifruit, mandarins, bananas and a lemon.  Plus I've ordered two dozen free range eggs, which will get devoured over the week.  We like our eggs ;-)  With the increased amount of fruit I'm currently eating, I ended up getting some extra apples, kiwifruit and mandarins at the supermarket the other day just to top up the fruit bowl, but otherwise I think the amount of fruit and veg contained in the box is about right for us.  And I really am enjoying trying new things to use up the different vegetables!

Right, must dash.  I have 240 squats and a BodyRock workout that needs doing, before I get stuck into this assignment.  Have a fabulous week, and I hope your Mother's Day was as awesome as mine was!
Posted by kreachr at 12:45