I am saddened to discover that I can no longer touch my knees with my nose.  I know this may sound a little ridiculous to some of you, but I have always prided myself on my relatively good flexibility.  Turns out I was quite delusional.  Although I am getting fitter, faster and stronger with all the run training (yesterday's 6km run had an average pace of 5'15" per km) and workouts (today's ab challenge was 105 sit ups, 160 crunches, 60 leg raises and a 1:35 plank, and the plank challenge was a 3 minute full plank), my flexibility is waning considerably.  My hamstrings are really tight!  Although I can still easily touch my toes without bending my knees, I can no longer fold completely in half like I used to, and for some reason I find this very disappointing.  My body is getting older and less supple.  So I've decided it is time to change that (well, the suppleness at least), and take up yoga.  Perhaps one day I'll be able to do the splits again (I miss being able to do that, oddly enough), but for right now, I was just glad to be able to do my leg raises today without the unfortunately-all-too-familiar feeling of tightness in my hamstrings, after a 30 minute yoga session beforehand.  I am unwilling to pay a fortune for yoga classes, and can't get to the free yoga sessions at Lululemon (bad time of the day), so is anyone able to recommend a good yoga DVD?  As a complete newbie it's very hard to know which one would be good to start with.

Turns out I can't do handstands any more either.  It's not the balancing or strength that's a problem, it's that as soon as my body is inverted, pressure builds up so much in my head that my face starts to swell and my eyeballs go all red.  It's quite an uncomfortable (slightly painful) feeling.  I found this out today while attempting to do the daily hiit workout.  Won't be doing that one again, let me tell you!  I'm a little less disappointed about this as I am about my flexibility, so I think I can live with this development.

Speaking of disappointments, I was a little bummed that last night's dinner didn't quite go to plan.  I was making a silverbeet and ricotta frittata, and kumara and leek rosti with garlic aioli.  Both were perfectly edible, but it wasn't quite the meal I had in my head.  The frittata was a little overcooked on the bottom, and the extra light ricotta wasn't really suited to being used as a topping.  Plus, I forgot to season the egg so it was a little bland.  The rosti came out fine, but the aioli was a complete bust.  I've never made it before, and due to my inexperience used the wrong attachment in my food processor.  That, coupled with the oil being poured in too quickly, resulted in not-aioli.  It tasted fine but looked rather revolting.  Perhaps I should've stuck to the original plan and just made crumbed schnitzel... Oh well...  Tonight's dinner should be a little better - leftover silverbeet and ricotta frittata (with lots of seasoning) and Mongolian beef.  Not the best combination, but edible all the same.  Hopefully.

I did have one success yesterday (aside from breakfast which was ridiculously good - bread fresh out of the oven, toasted and served with scrambled eggs (made with cream, y'all!) avocado and feta - yum!), which will never ever be repeated.  I made brown sugar chewies.  Dude.  It was amazeballs.  So good in fact, that out of the 16 pieces I cut out of the slice, I ate ten of them.  This is why I will never make that recipe again.  I cannot help myself.  This inability to control myself may be repeated soon, when I make this Amish cinnamon bread.  And I have plans to make cinnamon pull-apart bread for breakfast one morning this weekend.  Also potentially problematic.  I've said it before and I'll say it again - Pinterest is dangerous!

It can be good too though - I found the recipe for these no-bake energy bites (they're really yummy!  I added some dried cranberries to mine.  Yes, I've grown to like cranberries now in case you're wondering), and these vegan nori rolls (delicious!).  I'm looking forward to giving some baked oatmeal a go this week too.  We got a couple of persimmons in this week's Foodbox, so I'm going to try this persimmon and cranberry oatmeal recipe (probably halved though, I doubt Deane and I will be able to eat a whole batch between us, even over a few days.  And the kids certainly won't eat it!).  I'll let you know how it turns out.

In knitting news, I'm rather glad I pulled out of the Sock Madness competition last round.  They've had to call a halt to that round (the slow team, despite their best efforts, just weren't able to get enough finishers across the line and the round had been going for weeks - very unusual for this stage of the competition), and the specs (and now pattern) for round five is out - a button and a zip is included in this sock!  The pattern isn't yet up on Ravelry so I can't link to it, but needless to say I'm very pleased to not have to knit this pattern.  I'm plodding along on Deane's sweater, and am over halfway done on the sleeves now.  I might have it done by the end of the weekend if all goes well, which is probably good timing considering how the temperature has dropped recently.  The Starks are right - winter is coming! ;-)

By the way, do you remember months and months ago (in fact, last year) I was knitting a secret project and promised to show you once the recipient had the item?  Yeah, she received it quite some time ago, and I just forgot to show you.  Oops.  In any case, the project was the Bias 'Before & After' Scarf, that I knit with some laceweight gifted to me by my friend Jill in America.  It was knit up into the scarf with some beads added along the ends, and sent back to her.  Why, you may ask?  Because the name of the yarn was 'Crazy Woman' and I thought she deserved it more than I did ;-P  Sadly, I forgot to hang on to the yarn tag so I couldn't tell you what the yarn was that I used, but it was a wool silk mix of some description. 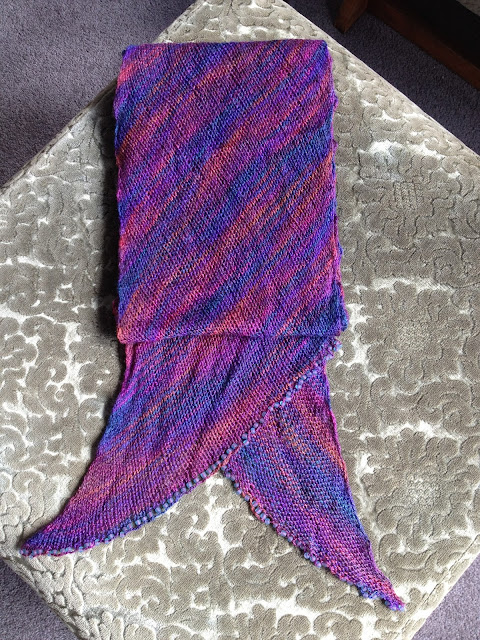 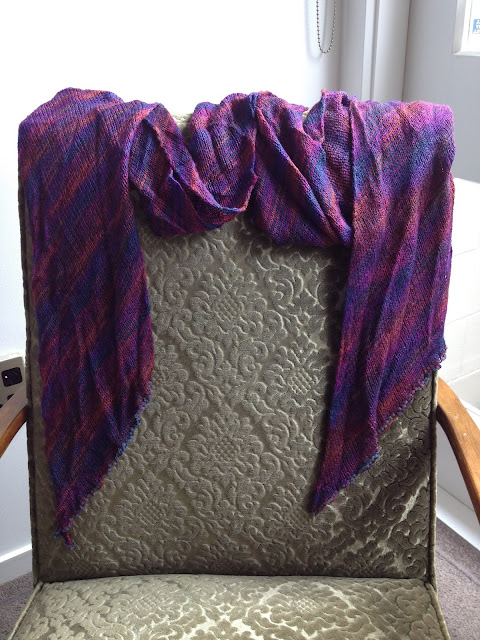 The Cassidy cardigan made its way down to Napier, and I'm pleased to say that my sister fits it.  So although the yarn was my birthday gift, dyed in a specifically requested colourway, at least the effort of knitting it wasn't wasted and in need of being frogged.  I believe the cardigan will be put to good use over the winter, and hopefully many more winters to come.  My niece's shrug cardigan also fits, so the rest of my birthday yarn didn't go to waste either :)  I have two skeins of the pink yarn left.  Anyone want to take it off my hands?  $20 per skein plus postage and its yours ;)

Next on the to-knit list is going to be a Chandail cardigan - the only cardigan in my favourites that a) is knit in worsted weight yarn (which I have enough yardage for), b) is knit in one piece, and c) has a size small enough to fit me.  I really wanted to knit the White Pine cardigan but I would have the same problem as the Cassidy cardigan in that the smallest size is for a 36" bust.  I was going to knit hoodies for my boys but both have said quite emphatically that they do not want a hand knit sweater for winter, so rather than be hurt by the obvious dissing of my awesome knitting skills (haha) I shall take this as a blessing and happily cast on something else for me.  This recent development will also help me stick to the self-imposed stash-only knitting.  I'm doing very well so far this year knitting only from stash (or yarn that was purchased at the beginning of the year specifically for a gift, in the case of Deane's Doctor Who scarf).  My decision to not go to KAN this year will help me avoid buying more yarn, so let's see if I can get through the rest of the year yarn-purchase free!

So, plans for the rest of this week - finish the assignment I'm working on tomorrow, then get Deane's sweater finished over the weekend.  Make yummy breakfasts and dinners and very dangerous baked goods for all the in-between times (Hobbits have it right with second breakfast and elevenses I think...).  Next week, hopefully start my new cardi.  I think the colder weather calls for a snuggly new cardi, don't you?

Also starting on Monday is (in my mind) the official beginning of my half marathon training.  Really looking forward to the longer distance runs!  As much as I'm enjoying the improvement in stamina for hill runs, and the sprints which are helping increase my speed, I've missed the longer runs I'd become accustomed to.  With the addition of yoga to my training, I'm hoping for an injury free rest of the year.  Marathon next year perhaps...?  One can hope...
Posted by kreachr at 16:32