Yes, the temperature is starting to drop a little more, which means crisp days, cool nights and warmer clothes.  Yay!  I'm very pleased about this.  I do rather love snuggling into cozy clothes, or smooshing up on the couch with a blanket and some knitting.  Can't wait for it to get even colder!  Of course, being up in Auckland it doesn't get nearly as cold as I'd like, but we make do, don't we?  I'll be digging out the scarves and shawls, and maybe some hats.  I did something I've been wanting to do for some time, and chopped all my hair off.  I went from this: 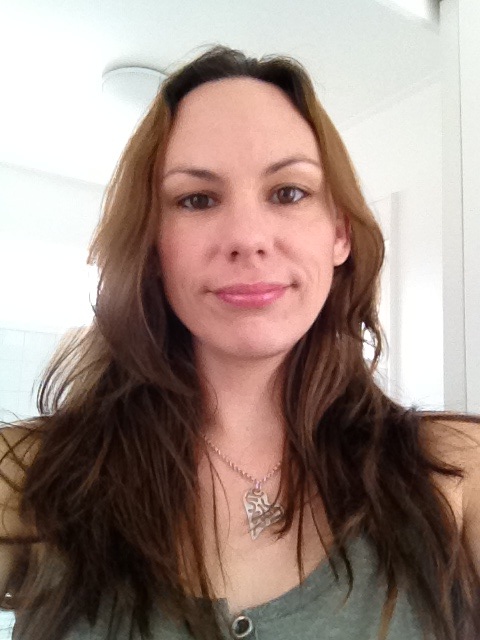 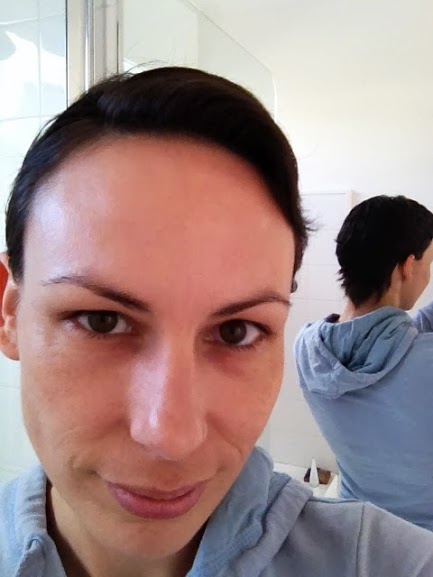 Quite a change, huh?  I haven't had my hair this short since I was 12!!  I'm hopefully less likely to get mistaken for a boy now.  Fingers crossed...

I rather like it.  The kids hate it.  Deane is ambivalent.  But then, he's ambivalent about most things.  Of course, this now means my neck is going to be extra cold, and my head is going to feel a little more chilly, so hats and scarves will be essential this winter!  Looking forward to it ;-)  I'm already enjoying not having to flick my hair out of the way 50 million times a day, pull long strands of hair off anything and everything (including food), and unclog the drain on an almost daily basis.  It's nice.  And I'm very happy about the amount of shampoo and conditioner I WON'T be using!  There's a money saver right there!  Especially when the hair products you use cost $45-$50 a bottle...  Runs and workouts no longer require ridiculously tight hair ties just to keep it all under control, and showers are waaaaaay quicker!  Hurrah!  No doubt I'll get sick of it soon and decide to grow it out.  I seem to have a five to seven year cycle with short/long hair cuts.  At the moment though, I'm totally loving this cut.  I'm having so much fun trying out different ways of styling it!  Tomorrow I might go for a semi-mohawk look ;-P

On the workout front, things have been going pretty well.  Run training is ticking along smoothly, and next week is the last 5-10km training week.  Then it's on to the half training!  Woohoo!  BodyRock workouts are killer, particularly the ones I did over the weekend and on Tuesday.  It was part of a seven day challenge, and wow.  It was challenging.  But it was so much fun to do!  I may just have to do that whole week of workouts again :-)  It'd be nice to have all the flash equipment, but my backpack full of yarn (that weighs about 3.5kg) in place of a sandbag and ugi ball, and chairs and a broomstick instead of equalizers will do.  At least I have the stationary bike!  And plenty of space in the other half of the lounge that nobody else uses.  It's become my yarn storage room/home gym.

Other things I've been having fun with is food!  Glorious food.  This week has seen more chocolate chip muffins, a divine chocolate cake, a ridiculously yummy spiced pear upside down cake (with cream!  OMG!!), pumpkin soup with way too many croutons (they were so good!), and a really yummy coleslaw:

Combine the yoghurt, oil, garlic, parsley and seasonings in a jar and shake well, then pour over the cabbage and yams until well mixed.  Leave to sit and chill in the fridge, then devour.  YUM!  Tonight, I'm going to give these vegetable nori rolls a go.  Can't wait!  Deane's feeling a little meat-deprived (don't know why, we had Japanese-style meatballs on Tuesday, beef pot roast on Wednesday, and chicken last night) so he's having steak.  As for the kids... I haven't figured that out yet.  I'm guessing T will be happy with baked beans - he loves them, and hasn't had any for a while.  X... maybe he can share Deane's steak.  It's a 280g scotch fillet, I'm sure he won't mind ;-)

Oh, and I finished my Cassidy cardigan!  But guess what?  I forgot to take photos.  Duh!  Also, it's too big for me so I sent it off to Napier with my parents so they could give it to my sister.  No guarantees she'll fit it either (it'll be too small for her probably) so there is a possibility it will be coming back.  Either way, I'll get a pic of it eventually.  This means, of course, that the nice cozy hooded cardigan I was planning on living in this winter didn't quite pan out, so I'm thinking about what to cast on next.  I have half a dozen skeins of Cascade 220 in Turtle (same colour as the wedding afghan I knit recently) that I was planning on knitting into a Tea Leaves cardigan, but this might be used for a hoodie for T instead (since his favourite colour is green, and he's grown out of his other hand knit hoodie).  Plus, I've been eyeing up this cardigan, and I'd also really like to knit this one.  It's been in my faves for a year now.  And seriously, how cute is this sweater?  While I decide, I've been working on this sweater for Deane, sans double seed stitch pattern (because he wanted a plain v-neck sweater.  Fine with me!).  It's been over a year in the making.  Well, I intended to make him a sweater last year and botched it, so I'm making a different one now.  I cast it on last week, and have finished the body: 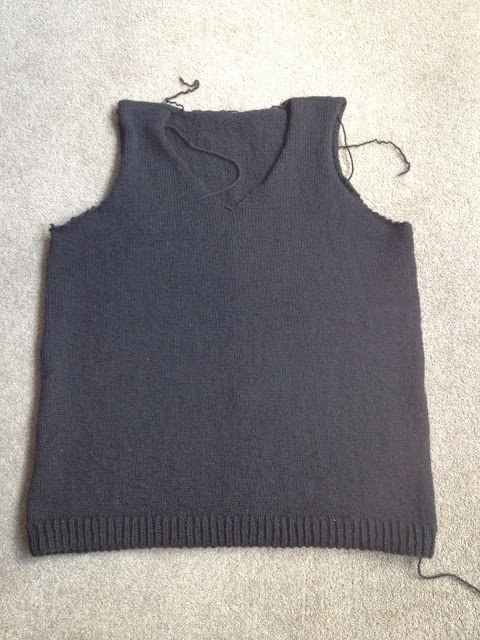 Yes I know, not a terribly thrilling picture really.  A plain black sweater body.  Wasn't terribly thrilling to knit either (XXL size too, I'll have you know), but I'm more than happy to knit it.  Mostly because I feel guilty about not having knit it last year like I said I would, but also because it is mindless, easy knitting and it allows me time to deliberate over what to cast on next.  Well, it did for a while anyway.  I cast on the sleeves for this sweater last night, but my 4mm circular isn't long enough to do them two-at-a-time, so I'm hoping to be able to borrow some interchangeable tips off a friend.  I could buy some, but borrowing them will get them to me quicker ;-)  I'll order some and swap once they arrive, but in the mean time, I have to wait until Sunday.  Today is Friday.  That means I either have to forego knitting, or cast something else on.  I haven't decided what to knit yet!!!  What am I going to do?!?!?  Ideas welcome :-)

Must dash, the kids are due home any second.  I'm off to make vegetable nori rolls.  Have a great weekend!!
Posted by kreachr at 15:03