So, going over the week that was: X came back from camp very happy, dry, and all in one piece; Auckland fared much better than much of the country during the storms, and there was certainly nothing to complain about; I knit a toddler-sized hat in an afternoon (they're so quick!), I finished my giant cowl, got some buttons for my cardigan (finally), and ran a whole bunch.  Let's expand on these events, and throw in some food for good measure ;)

X had a great time at camp, despite the rain and cold.  They fit in outdoor activities such as sailing and confidence course missions between bouts of bad weather.  The rest of the time they enjoyed indoor activities - playing games, practicing and performing in the 'talent quest', and so on.  Apparently the food was excellent, with scrambled eggs on toast for breakfast as well as the generic cereal and porridge, and good stuff like lasagne for dinner.  Kinda jealous really, as our week was choc-full of freezer leftovers.  I figured that with X away and T unlikely to eat most of what I cooked anyway, there wasn't really much point in putting effort into meals, plus we had quite a bit of random stuff piling up in the freezer that needed to be eaten.  Now we have plenty more room for another 20kg order of Green Meadows Beef, mwahahahahaha!!

The storm that rolled through last week was a whopper, with damage to roads, houses and trees in a lot of places like Wellington, and snow covering much of the south.  Power outages all over the show!  It's better described in Welly knitters' blogs such as KiwiYarns Knits and Sezza Knits.  Up here wasn't so bad.  We got thunder and lightning (which I LOVED), strong winds and plenty of rain and hail, but that was about it.  This has meant several wet runs.  Normally, I love the rain.  I'm not bothered by having to head out in it on occasion.  But when it starts to become a regular occurrence, it does start to get a little annoying.  Particularly because I have to be extra careful that my phone isn't water damaged.  It has forgiven me for the last rain-soaked incident and is back on speaking terms with me, which is great because I can now use my circuit training timer and the Simply Yoga and Nike Training apps again, yay!  I'd like to keep it that way, but not all of my running gear has conveniently located pockets.  Note to self: when buying running gear in future, check for pockets before purchase!

Last weekend's long run (not the weekend just gone, the weekend before that) on Sunday (16th June) I took some dextrose tablets with me because it was 15km which takes over an hour, and I was going before breakfast.  I had them in my pocket but the paper wrapping around them was no match for the rain.  They turned out kinda mushy and rather hard to get out in one piece.  I managed to chomp a few down during the run, but chucked the rest when I got home because they were a write-off.  So I'll have to get some more GU Chomps for next time I think (I love those things, they're awesome).  This weekend's long Sunday run was 16km and I didn't take anything with me, because again it was raining.  Although it did clear up about quarter of the way in and stayed relatively fine the rest of the way.  No biggie though, I made a batch of cinnamon apple steel cut oats when I got home.  The perfect tummy-filler!  I cut an apple into chunks and threw it into a pot with 1/2 cup steel cut oats (got some Quaker Steel Cut Oats from Martha's Backyard the day before), 2 cups milk, 1 teaspoon cinnamon and 1 tablespoon muscovado sugar (could've done with more sugar actually, I'll remember that for next time) - this makes enough for two people.  Simmer for 30 minutes and serve - I had mine with some maple syrup.

The weekend runs are getting interesting - they're longer, and hillier, and I'm trying out all sorts of new routes.  A couple of times I've gone around the zoo and Motat by running up Meola Road, along Moa Road and back down Great North Road.  Last Saturday I ran to Mount Eden, went up and down a couple of times, then ran home again.  I was supposed to be doing hill repeats, but with the amount of hills between my place and Mount Eden, I figured I had it pretty well covered ;)  And the view was great - the sun decided to come out and play: 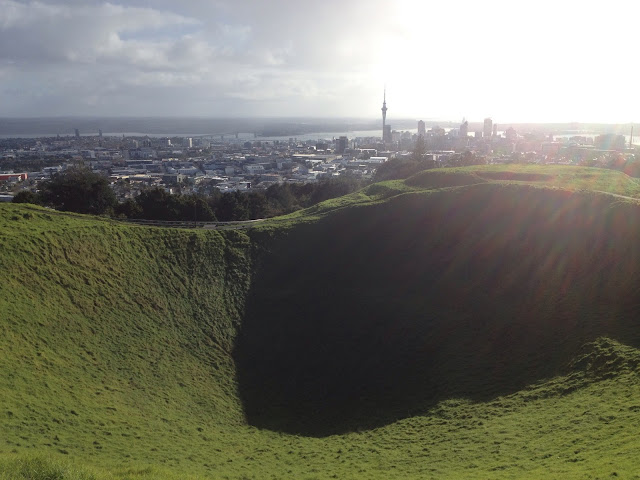 I'd never been to Mount Eden before, so it was fun.  I got a little lost on the way though, going down New North Road instead of Mount Eden Road (I am directionally challenged), but a quick check of the GPS map system on my phone had me heading back in the right direction (with even more hills).  It was a good run, but my calf muscles are still a little mad at me.  Well they can suck it, because there will be hills aplenty in the coming months!  This coming weekend is fartlek running on Saturday (I cheated on the last one, just running a longer distance with minimal pace variation - still ran my fastest 10km though ;P), and 18km on Sunday.  So close to 20km, OMG!  I'm nearly back to where I was in January!!  Ugh, injury recovery bites...

In between all that running and the workouts (some of which have been pretty tough - I'm doing a seven day killer workout challenge) I've managed to fit in some knitting.  The cowl didn't quite dry in time for Friday, but I still wore it across the road to school to pick X up after camp even though it was damp.  It was still very warm :)  Because I used a DK weight yarn instead of the recommended fingering weight, my cowl was a little (read: a lot) longer than the pattern specs.  It goes around my neck three times comfortably, and is so squishy soft and cozy! 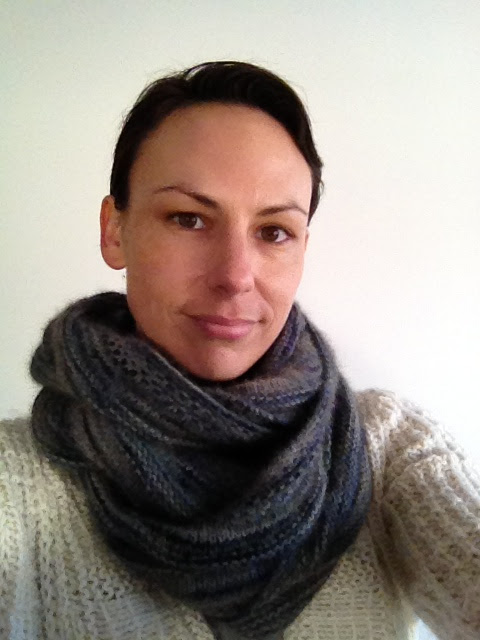 I'm very happy with the finished product, and can't wait to wear it more often!  Also finally finished (though not worn yet) is my Chandail cardigan.  I put buttons down the length of the cardi, instead of just two at the top.  Otherwise I followed the pattern to the letter (except for the bits I screwed up - ie: alignment of the bottom ribbing, and slipping the edge stitches so they were easier to pick up later.  Minor inconveniences that had no real effect on the overall completed product), and I luuuuuuurve it! 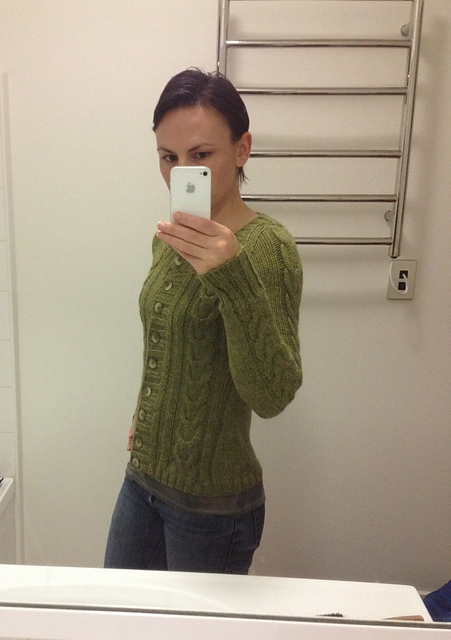 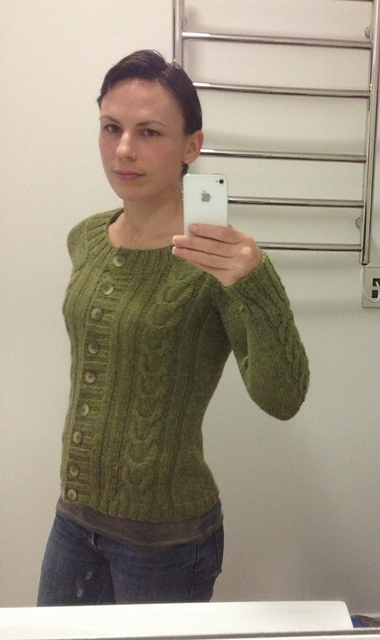 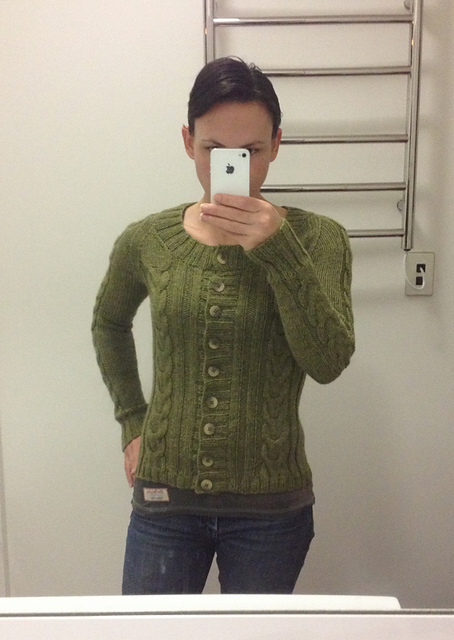 Oh, the horror!  Bathroom mirror selfies!! Although I managed to block most of my face ;)  And yes, my bathroom mirror needs to be cleaned... But seriously, look at the pretty cardigan!

I can't wait to actually go somewhere out of the house (that isn't running) so I can wear it :)  I love the colour, the fit, the yarn (Cascade 220) is perfect... it's just great!  Maybe I can wear it to the post shop so I can post this hat: 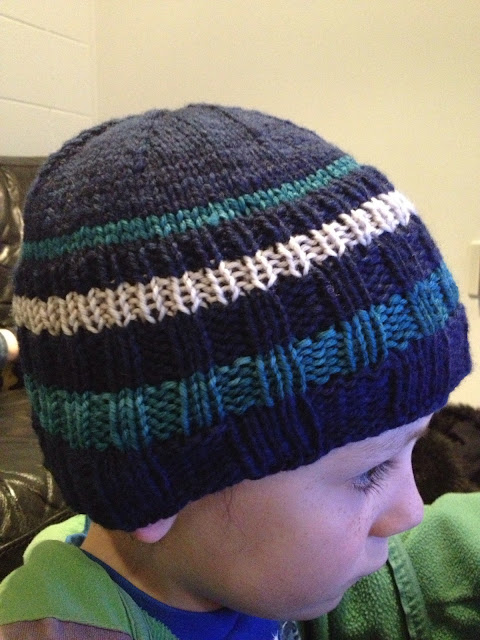 Expertly modelled by T (in other words, I shoved it on his head and snapped a pic while he played Terraria, or Prison Architect, or whatever it is the kids are playing these days...)

We had a friend stay a while ago with her little boy.  His hat got left in our car when they went home, and she had asked me to post it to her.  I said I would, then forgot (memory = colander).  So to make up for me taking weeks, I decided to throw in an extra hat for him.  It literally took a few hours in between cooking dinner and other bits and pieces, and I knit it up with leftover yarns (from a couple of cardigans and a hat).  It's the strib hat pattern, knit in the small toddler size.  Yay for quick projects!

I am currently working on a Citron shawl with some hand spun that's been sitting in my stash for quite a while now, the fibre for which was originally purchased from maude and me.  I'm not sure I like the yarn/pattern combo, it's a little too... busy... I don't know.  I might just knit it and give it to somebody.  Or I might frog it and shove the yarn back to the bottom of the stash again.  Who knows?  Either way, I've come to the conclusion that any further fibre purchases will be of the solid/semi-solid variety, or if variegated, will be chain-plied to keep the colours from muddying up. 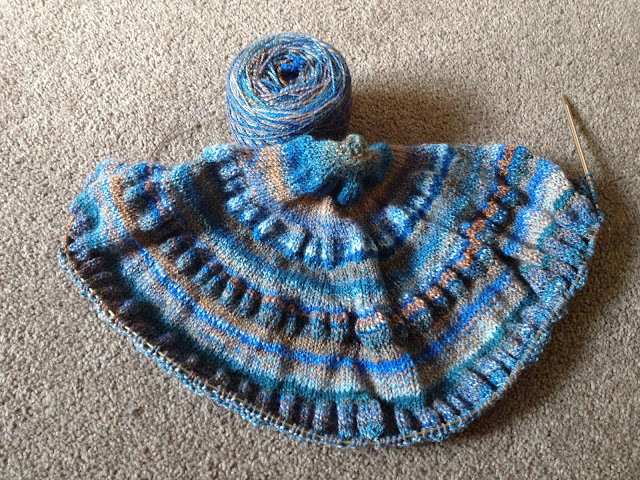 Speaking of fibre, spinning and plying, the annual Tour de Fleece event begins on the 29th June!  I have signed up again (crazy I know), although I'm only in two teams this year.  My only goal for this TdF is to spin the bag of cormo fibre I bought last year (or was it the year before...?) into a fingering weight, so I can knit it into a cardigan.  It's white at the moment, but I plan to dye it a charcoal grey before knitting it.  Grey goes with everything.  So does white, but it's harder to keep clean ;)  So there's going to be a little less knitting and a little more spinning in the next few weeks with any luck.  My study doesn't start up again until 15th July so I should be able to make a fairly sizeable dent in the bag of fibre before then.  The event only runs until the 21st July anyway so I should be alright.

I have signed up for two more papers - Accessing Information and Statistical Analysis, although I will continue to practice algebra, graphs and statistics on Khan Academy in the mean time.  The algebra I'm learning just doesn't want to stay learned!!  I think my brain has allocated a very small area for mathematics retention.  Still waiting for the final results of the last two papers... ugh, I hate waiting :/

Now, what's left?  Ah yes, food!  I ordered a bunch of pork, chicken and lamb from Moreish recently, but with X away we haven't really delved into it very much.  So far though, we've made a lovely lamb tikka masala with saffron rice and naan (totally cheated by getting the naan from the Indian takeaway restaurant across the road - I just ran out of time that day), a very scrumptious roast pork scotch fillet with caramelised onions that we had with creamed silverbeet, and last night we had sour cream chicken with broccoli pasta.  Yum!!!  Tonight we're having minted lamb loin chops with parsnips au gratin.  Can't wait!  Parsnips au gratin is to die for.

Right now, the rain has stopped and I have to go run 10km before the kids get home from school, so I better hop to it.  Stay warm, enjoy your week, and if you eat something amazing let me know about it!  I'm alllllll about the food!
Posted by kreachr at 12:53