Updating you on ALL THE THINGS!!

Food news - Hey, Jill!  Guess what?  I made pumpkin pie!!  Well actually, it's a little more kiwi-fied than that - pumpkin and kumara pie (because I didn't have enough pumpkin), with a Gingernut biscuit base.  We were supposed to be having friends over for dinner tonight, but it turns out they're coming over tomorrow night instead.  So rather than leaving the pie in the fridge not knowing if it was any good or not, I decided to sample the pie I spent hours making just to be sure I wasn't going to feed them something awful: 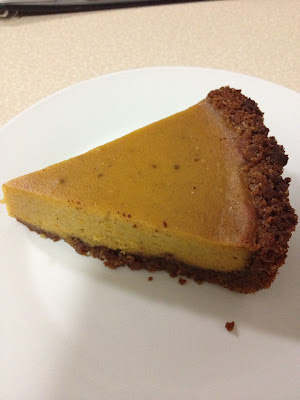 Turns out I needn't have worried - it was awesome :)  Deane said it was 'alright' (his response to everything), but said he usually makes his pumpkin pies a little sweeter.  Going back through my memory, I'm pretty sure he's only ever made one pumpkin pie...  But I digress.  My pie was good, although next time I think I'll stick to just the pumpkin (and maybe add a little extra sugar for Deane).  The biscuit base was really nice.  I had my slice with a little thickened cream.  There might be enough left for dessert tomorrow night.  If not, I have a backup plan.  It pays to be prepared ;)

I also made some hummus for the pre-dinner snacks, and had to try that as well.  Let me tell you, the extra five or ten minutes spent standing at the bench peeling all the skins off the chickpeas was totally worth it.  This hummus is delish!  Other culinary delights have been a little thin on the ground in the last week, as we're scraping the bottom of the barrel with regard to freezer stash.  I've put in my order with Moreish for lamb, chicken and pork, which should arrive on Thursday.  My Green Meadows Beef order will be going in soon too.  We've got some sausages and mince left, so it's time to get creative.  The kids' latest dinner favourite is cheat's sausage rolls: 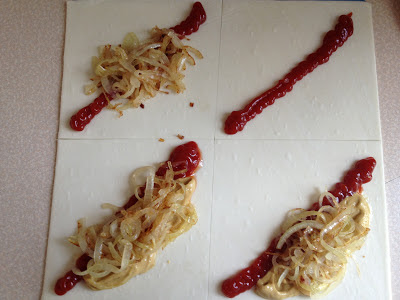 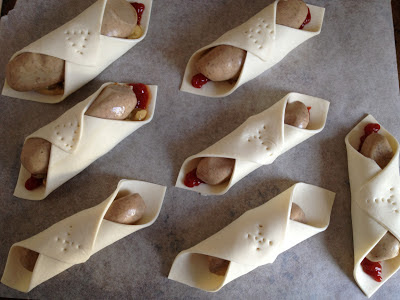 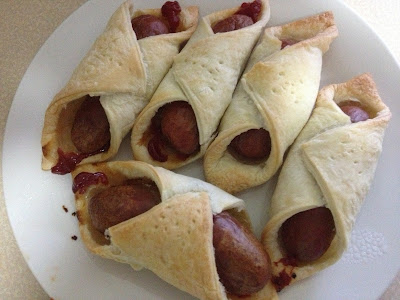 Take a sheet or two of flaky pastry depending on how many sausages you have, (I used low fat, to make me Deane feel better) and cut into quarters.  Add whatever toppings you want to each quarter (Deane had sauce and mustard with onions, I had sauce and onions, T had sauce, and X had boring old nothing).  Place a sausage on top and fold the edges over.  (I marked mine with initials so I knew which was which).  Bake at 180ºC for about 30 minutes and you're done!  Not the prettiest looking things, but they get devoured!  It makes a nice change from 'ew, I don't like that, I'm not eating it' :)

Breakfasts have been a little more fun - I made another batch of our favourite granola (although if I'm honest, most of the granola-eating hasn't been at breakfast time... shh), and this morning Deane and I had chia pudding (half and half coconut milk and lite milk, so my tummy didn't get angry with me).

Kid news - the boys had their cross-country recently.  Both did quite well, although they didn't place anywhere.  We're not a strong running family, but that's perfectly fine with me.  T did really well and ran the whole way, hills and all!  And he didn't even want to run it!  He told me later he ran the whole way because he wanted to get it over with quickly.  Bless.  Only a kid can run an entire cross-country in a polar-fleece hoodie and jeans: 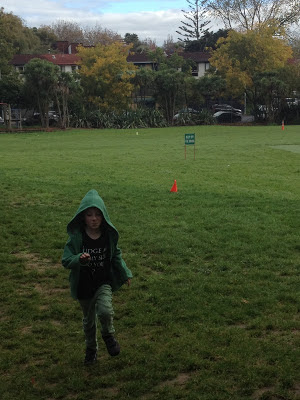 X has camp next week - four days on Kawau Island in the Hauraki Gulf.  Kinda wish I was going with him... then again, it'll be riddled with children.  Maybe not ;)  His asthma has been playing up a little bit lately.  Whenever he coughs or can't finish a full sentence, I find myself taking deeper breaths, as if I could help him breathe better.  Hopefully his cold will clear up before they go - fingers crossed.  Now if only he'd wear a jersey to school!  Stubborn child, grr.

T has camp next term.  I think he's pretty excited about it, as it will be his first school camp.  My main concern will be his fussy eating.  Good luck to the camp organisers!  And I hope he doesn't spend the whole camp ravenously hungry because he doesn't like what's on his plate.  It wouldn't surprise me...

Study news - I have finished my study for this trimester, yay!  I completed the online assignment this morning.  Turns out I really, really suck at multiple choice quizzes.  Can't seem to do very well at them.  I get bamboozled by all the options.  Luckily, the last assignment is a two-part (first part multi-choice, second part 300 word essay), and only worth 15% of the total mark for the paper.  I got two A+ assignments, which were worth 45% and 30%, so I'm hoping that'll get me across the A+ paper line.  I don't quite know how they calculate the total mark, although it's probably a fairly simple mathematical equation (says the woman who is having to work through a maths revision workbook in order to be able to complete a Statistical Analysis paper next trimester).  Wish me luck!  Next trimester starts on the 15th July.  Gosh, what am I going to do with all that spare time?!? ;)

Knitting news - I have finished the body and both sleeves of my Chandail cardigan, woohoo!  Now I'm up to the part where I join it all together and knit the yoke: 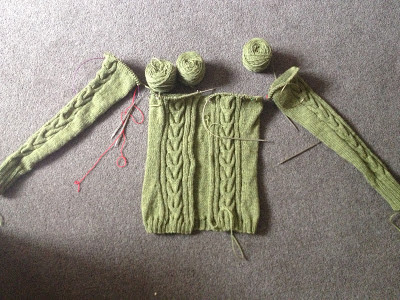 It looks a little weird at the moment, but I should have all the pieces connected and a good chunk of the yoke knit by the end of tonight, then there will only be the button band left to do.  Yay!  I'm loving the Cascade yarn, and think it may become my go-to for sweaters and cardigans.  I'll have to see how well it wears first, but so far, so good :)

Running news - my phone.  It's alive!  Although it's giving me the silent treatment at the moment.  Hopefully that's not a permanent thing.  The sound came right eventually after its dunk into my tea, so I'm really hoping that after a little time the sound will come back again.  I don't currently have the funds for a sport watch, so my phone is still having to be my GPS tracker/timer on runs.  This is doubly important now, as I have started the more intense training that involves hill repeats and fartleks.  It's hard, but as much as I'm questioning my sanity while doing it (and reminding myself constantly why I'm doing it!), I'm really enjoying the harder runs.  I guess there's more of a sense of satisfaction at the end of it.  And I've gotten to the longer weekend runs!  Last Saturday we all went to Cornwall Park, and Deane and the boys had a picnic lunch and rode scooters on the scooter track while I did a 10km with two sets of five hill reps, then Sunday was a slow, easy 13km along Tamaki Drive, after which I came home to a cooked breakfast (bacon, garlic and gruyere hash browns and eggs - yum!).  This weekend will be 45 minutes of fartlek running in the middle of a 10km-ish run, and on Sunday, a 14.5km.  Can't wait!  The weekdays include two 9.5km runs, and cross training.  It's been great, I'm loving it!  Yoga is going well too, and I'm managing to fit some in most days.

Happy, happy, happy.  I hope you're all happy too, and life isn't throwing you too many curve balls :)  Have a great week!
Posted by kreachr at 15:31