You win some, you lose some

I finished Deane's giant man-sweater on Monday.  Technically not the weekend, but since it was a public holiday I'm going to pretend I finished it on the weekend like I planned.  Unfortunately, black isn't particularly photogenic.  Particularly when the weather is all gloomy and dark.  But here's a photo anyway: 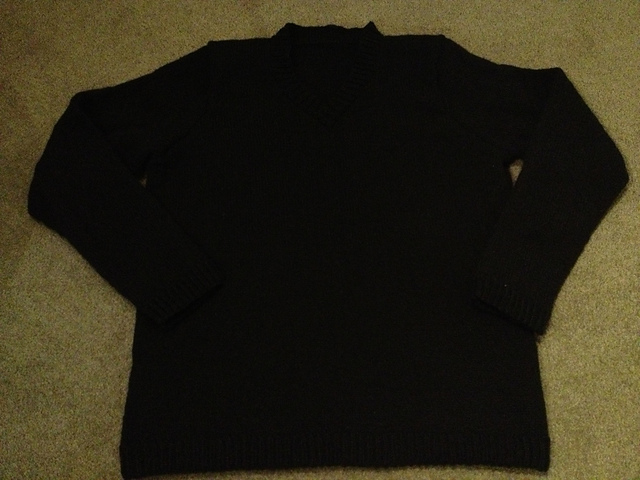 It fits perfectly, and Deane happily wore it to work yesterday.  Luckily it was a little chilly :)  He also wore his Doctor Who scarf, and I daresay some hand knit socks.  Knitting win!  With the sweater finally off the needles (finally she says, having just knit an extra large man's sweater in less than three weeks... why yes, I brag.  What say you?), I cast on my Chandail cardigan last night, with the Cascade 220 in Turtle I had in my stash, purchased in Canada in January.  Loving it so far - the yarn is nice and soft, and a lovely colour; the pattern is straight-forward and easy to follow.  More knitting win!  I'm hoping to be able to get it finished relatively quickly.  I already want to wear it ;-)

Unfortunately, I ran out of time before the end of last week to get my assignment finished.  I'm only half done now, and didn't get to it at all today.  Study fail.  (I blame Deane for hogging the laptop all morning.  The kids had student-led conferences this afternoon then had friends over so I had no hope!)  On the plus side, it's not actually due until next Friday.  Fingers crossed I'll get it done well before then and will have time to finish off the other paper before the online real-time assessment for it becomes available.  Still haven't got to that calculus workbook either...

Running is going well, with a two-lap jaunt around Cornwall Park on Sunday that included a non-stop run up and over One Tree Hill.  I was very pleased with my effort, but didn't quite have enough steam for a second attempt.  Having said that, the end of the circuit has a pretty meaty hill anyway.  Unfortunately, after having fluffed around at home waiting for Deane and the kids to decide whether or not they wanted to come with me, I ended up leaving my phone behind so didn't get to track the run.  I'm a little bummed about that, but it's not the end of the world.  I just have to remember to add about 15km extra onto my year's tally (for my 2013km in 2013 challenge), since I have now not tracked two Cornwall Park runs.  I had a great 10km run yesterday as well, and remembered my phone for that.  Sadly, it started to rain while I was out.  Ordinarily this wouldn't be a problem, but it turns out my Nike running jacket is not waterproof, and my phone got wet while it was in my pocket.  There was very evident water damage under the screen.  So the phone is currently sitting in a bag of rice on the kitchen bench, (hopefully) drying out.  I really hope it still works!!  Poor phone, it's had a hard life :(  I think I may need to re-prioritise getting a Nike Sportwatch, to save my phone from any further run-induced damage.  In the meantime, I may need to dig out my old Sportband for tomorrow's run.  It doesn't have GPS tracking, but at least it can log time, distance and pace.  Having said that, it's not very accurate (I haven't calibrated it for some time and my average speed has increased significantly since) so perhaps it would be a waste of time.

Other training has continued merrily, and I completed my 30 day ab challenge yesterday with 125 sit ups, 200 crunches, 65 leg raises and a two minute plank.  My coccyx is thanking me!  It was starting to develop a callus from all the sit ups.  I kid you not.  It's a little crooked and sticks out a bit more on the left, so when I'm doing sit ups (particularly in the hundreds) it can start to cause some issues.  Note to self: invest in a padded exercise mat.  I only have a few days left of my plank challenge too - today's plank was four minutes ten seconds.  That time will increase to five and a half minutes in a few days.  I've gotta say, it's getting pretty difficult...

Yoga is going well too.  I've managed to do between 20 and 60 minutes every day (except one), and have noticed my flexibility improving ever so slightly.  My nose can almost touch my knees again!  I'm going to stick with it and try out all sorts of asanas.  It is very relaxing (unless Deane and the kids are playing a shoot-'em-up X Box game in the next room - ask me how I know).

Food-wise, the Amish cinnamon bread was good, especially warm with cream ;-)  Probably not how it's supposed to be eaten, but who cares?  The cinnamon sugar pull apart bread was also delicious, and as suspected I had trouble stopping myself from eating it.  Pretty sure I ate half the loaf on my own.  (I halved the batch and only made one loaf.  Likely a very wise decision...).  I was a little dubious about how the persimmon and cranberry baked oatmeal would turn out, and made a half batch first time around.  And another half batch the second time around.  Yes, it was that good.  My first batch, I dished myself up a quarter of the half-sized batch.  I devoured it in record time with a drizzle of maple syrup, then went back for another quarter.  Deane came downstairs and ate as much as he could of what was left, and I polished off the remainder.  A couple of days later we invited some friends over for breakfast to help us eat the second batch (read: prevent me from eating too much of the second batch) - we had it with cream this time around, and it was equally as delicious as with maple syrup.  Other culinary delights from the weekend included rice pudding with rhubarb, coffee pecan cupcakes with mascarpone topping (can't find a link, sorry), and a spicy pear loaf (sans icing, but again, awesome with cream).  Oh, and some double chocolate chip cookies ;-)

So yeah, there was a whole lotta bakin' goin' on!  Mayhap a little too much...?  Apparently that won't stop me though - the kids are out of lunch goodies, so more baking will be happening within the next 12 hours, and we need another loaf of bread.  Best get to it!

Enjoy the rest of your week :D
Posted by kreachr at 20:57