My wee boy headed off on his first ever overnight camp this morning, and he won't be back until Wednesday afternoon.  A little unusual, starting camp on the first day back at school, but he was very excited and got up at 7am on the dot, hoovered up his breakfast, then got dressed and brushed his teeth in record time.  After he'd made his bed (terribly) he asked, "how long until I have to be at school?"  Sadly, I had to tell him he didn't need to be there for another hour...

I had been asking him occasionally over the last week if he was looking forward to going on his first real camp, and he declined to answer.  My T is not the most loquacious child.  But in his own quiet way, his excitement was very evident in his eagerness to complete his school morning routine today.  To be honest, that made me feel a little less anxious about the experience myself.  All manner of thoughts kept drifting through my mind - would he like what they serve for dinner, or would he not eat anything and then be crazy hungry until the next morning?  Would he wake up in the night and be upset because he couldn't just wander down the hallway and jump in to bed next to me for a cuddle?  I'm still wondering these things, but they're not weighing quite as heavily on me now.  He was happy, smiling and pulling faces when the bus pulled away, and I managed not to turn into a blubbering mess.  I look forward to his stories when he gets home. 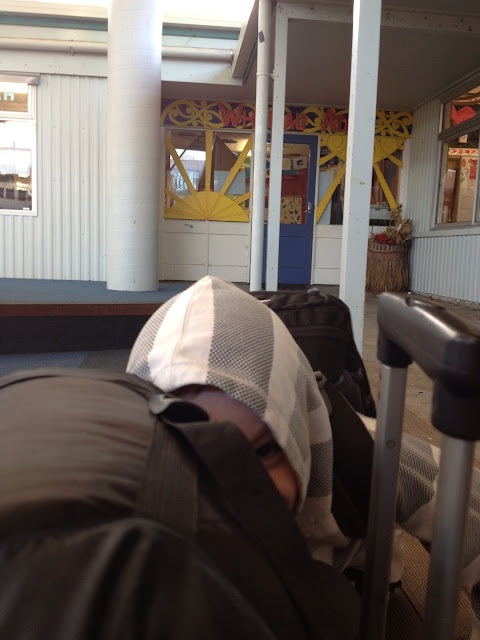 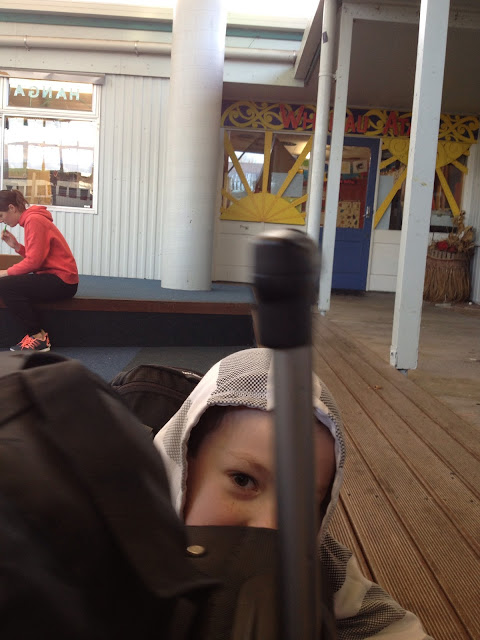 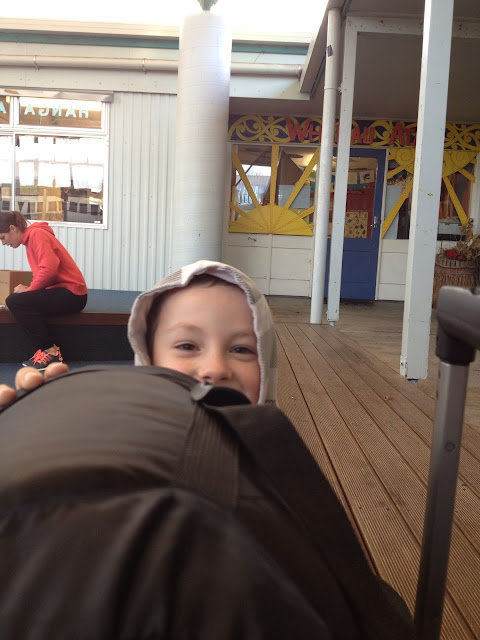 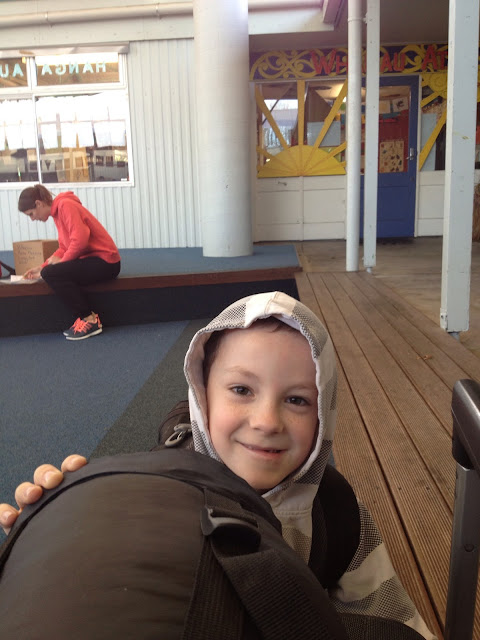 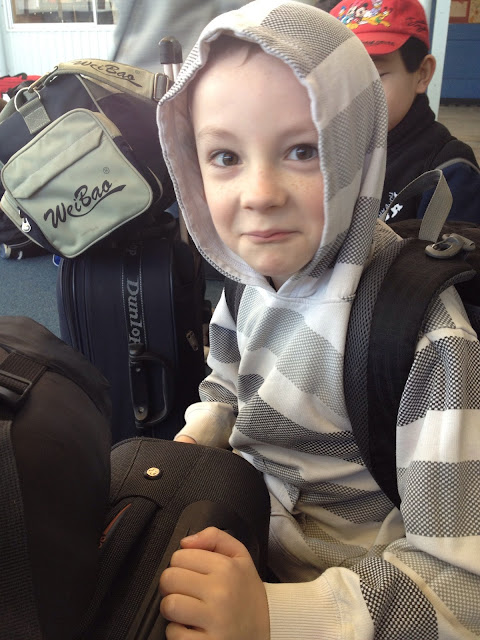 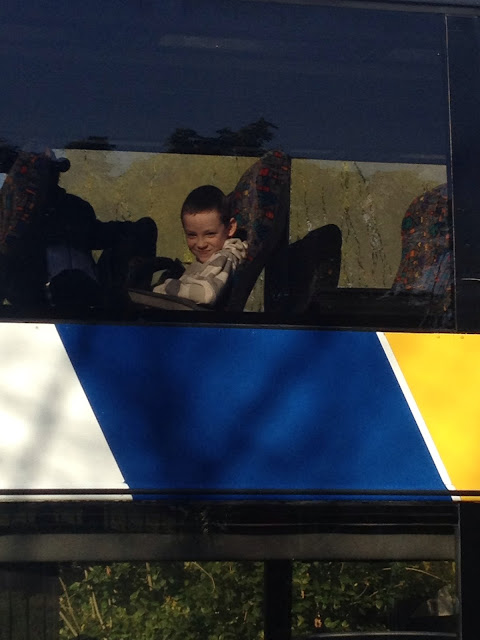 We had a busy/not busy weekend - ie: my weekend was busy, everyone else's was not.  That's fairly standard for the kreachr household.  While all three male family members lounged on the couch or upstairs playing one game or another, I 'got on with things'.  Namely, baking up a storm as planned.  Behold, my breakfast goodies, that I have named the 'freezer breakfast stash': 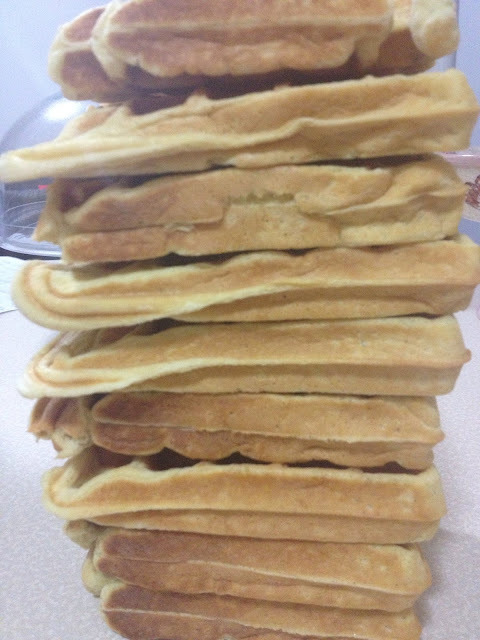 Giant stack of waffles (I only use a pinch of salt, and don't grease the waffle iron since mine's non-stick.  These were made with buttermilk, but I often use yogurt and/or milk) 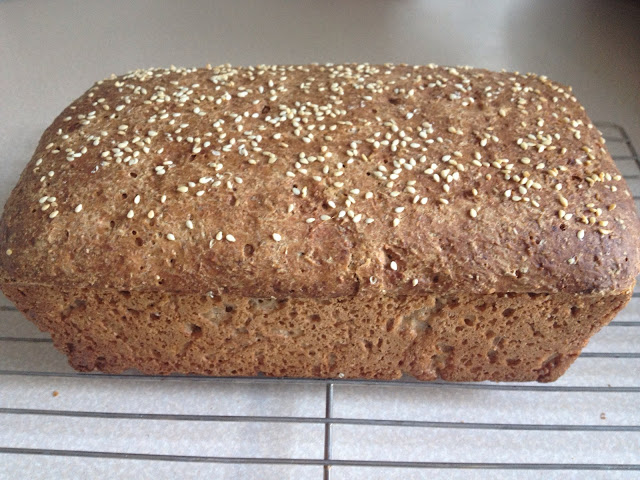 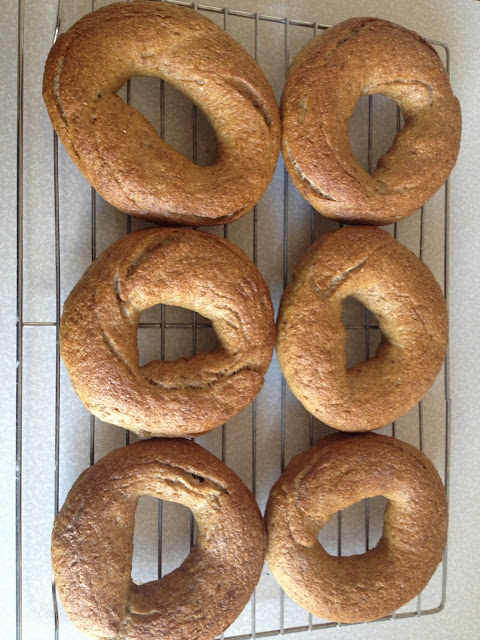 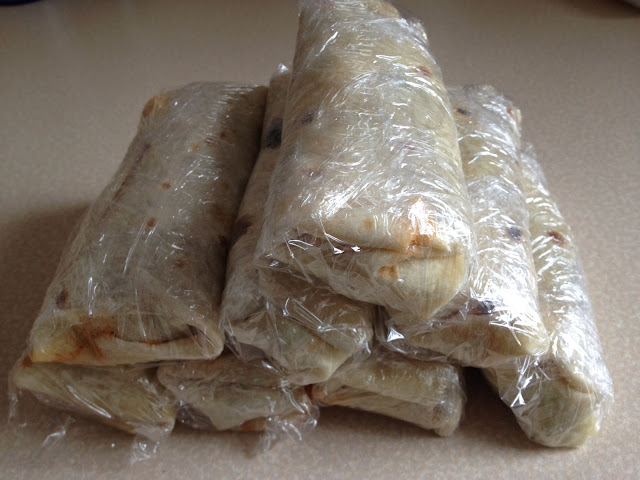 Breakfast burritos made with flat bread, scrambled eggs with black beans, bacon, tomato salsa and grated cheese.  Our favourite salsa is this one.  It is amazeballs 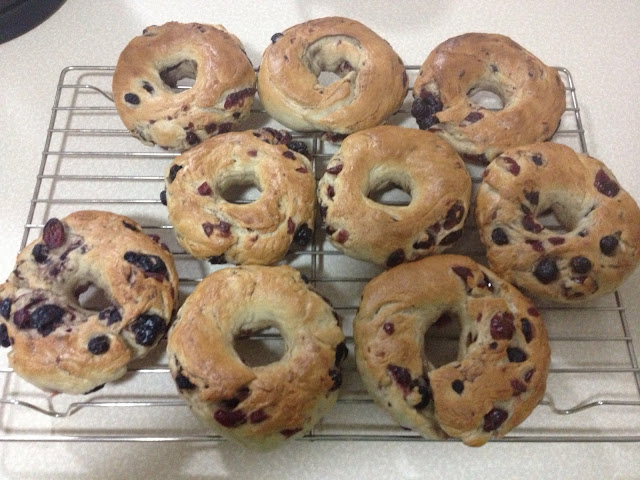 Blueberry and cranberry bagels (they would've been just blueberry bagels, but I didn't have quite enough dried blueberries) 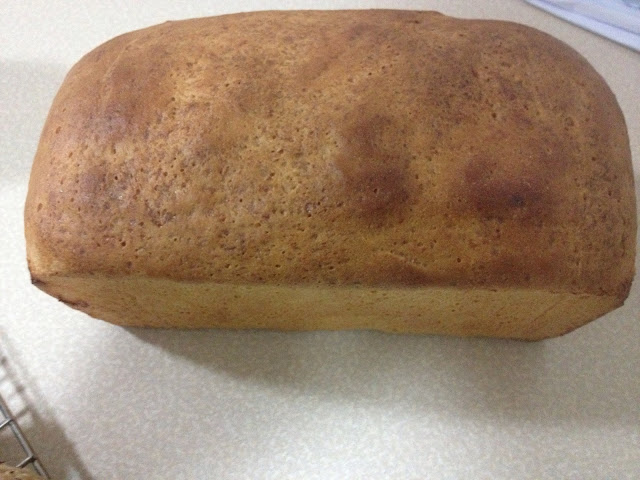 I had a lot of fun making everything over a couple of days.  I could've done it in one day if a) I had more mixing bowls, and b) I didn't run out of various ingredients and have to wait until I went to the supermarket.  I'm pretty sure Deane snuck out of the house with not one but two breakfast burritos in hand this morning!  I guess he's missed having the freezer stocked with them.  I stopped making them because I couldn't find a tortilla or wrap that didn't rip or fall apart when you rolled it up.  Solution?  Make my own, of course!  Nothing beats fresh home made :)  I'm getting the rolling out part down to a fine art.  One day my flat breads and tortillas might actually be round, instead of misshapen and lop-sided ;)  We taste tested the white bread and the blueberry cranberry bagels (awesome, of course).  I know from experience that the waffles and whole wheat bread is delicious, as are the burritos.  I haven't tried a whole wheat bagel yet though...

I'm really happy to discover that making bagels isn't nearly as difficult or complicated as I thought (mostly because Deane told me they were really difficult and complicated to make.  Pfft.)  I can see myself making this weekend baking 'freezer breakfast stash' a regular thing.  Sometimes being organised really is a good idea :)

On Saturday morning I was up bright and early so I could make my way out to Barry Curtis Park for my first park run.  I got there early, and had a chat to a couple of other first timers who are training towards their first half marathons.  We milled about as others turned up (30 in all), and at 8am we were off.  My run wasn't too bad considering my laziness over the last few weeks, and I finished in 26:20, 13th overall and 4th 'lady' (their word, not mine!).  I pushed myself just a little too much though and felt rather nauseated when I finished, but just walked around a bit and the gurgly tummy subsided fairly quickly, enough for me to grab a cup of tea and have a bit more of a chat afterwards before getting back in the car and heading home (getting lost on the way.  Never ask me for directions, that's all I'm saying).  I'd never been out to Flat Bush before and quite enjoyed discovering another area of Auckland. Barry Curtis Park is quite lovely, and the course was a relatively easy run - a mixture of footpath, grass and trail.  I'd love to be able to do a real trail run through the nearby Hunua Ranges some day soon.  Which by the way is actually quite far from the park.  I got a little confused last week and thought the park was essentially right next door.  Yeah, it's not - try another 40 minutes drive away... (I repeat, do not ask me for directions!!)

Sunday was the usual 'knitting in public', although this time my friend and I went to Mozaik Cafe instead of our usual haunts.  We were quite happy with our decision - the food was great.  I, typically, over-ate.  I'd made some gluten free waffles with caramelised pears for breakfast, so really should've just had something small for lunch.  Silly me.  Thankfully, I'd recovered enough by that evening to enjoy the roast lamb we had for dinner ;)  I'm now 3/4 done with the Kai-mei socks, and should have them finished within the next two or three days.  Next on the to-knit list?  The Cloud Illusions shawl in light grey mink I think...

And just because no post would be complete these days without a little oatmeal goodness, I have now also tried the fruity tea-steeped oatmeal with kiwifruit: 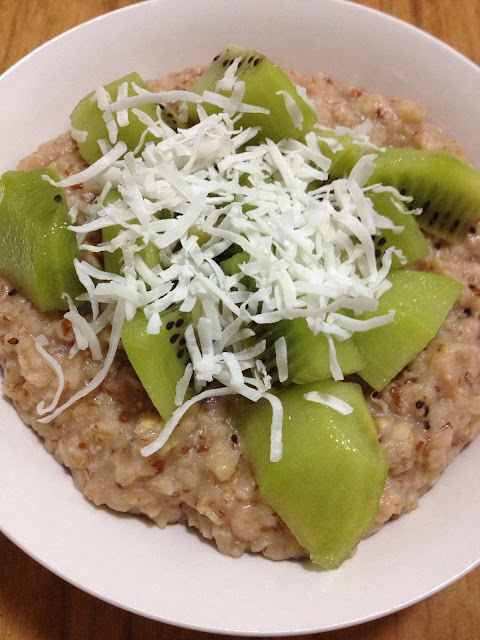 I used strawberry and lime tea, and I added a tablespoon of ground linseed and some coconut thread on top. 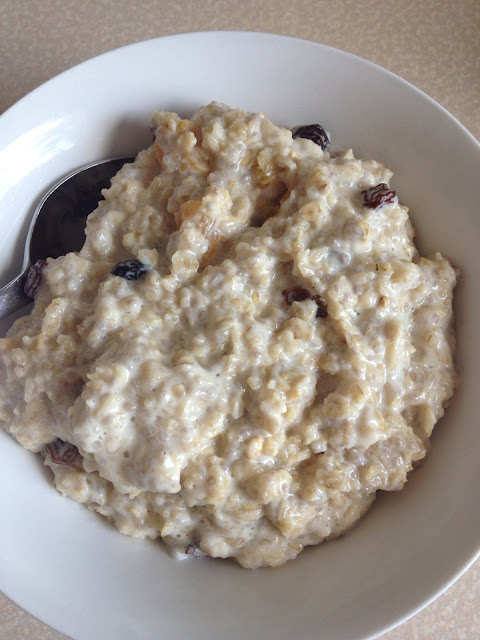 The only dried fruit I had left in the cupboard after the weekend's baking efforts was dried apricots and raisins.  I also added a tablespoon of white chia seeds.  This was cooked with unsweetened almond milk, my new fave dairy-free milk.  Aside from this one of course.

Day one of the new regime went well I think.  I got up at 5.45am and did 40 minutes of yoga.  Not quite the hour I was planning, but for reasons beyond my early-morning-brain control (eg: not being able to get the first yoga video app to play with sound so having to use the other one, then later discovering it was because I had my phone on mute O.o) I ran a little short on time.  But the daily housework chores were done, everyone was fed, statistics were analysed, and I am now enjoying my 'free time'.  Let's hope it continues ;)  Enjoy your week!
Posted by kreachr at 19:36