Breakfast: The most important meal of the day

And the yummiest in my world at the moment.  It's only been a few days since my last post, but I just couldn't wait to tell you about two breakfasts we've had the last two days.  They were seriously that good!  Saturday's breakfast of leftover steel cut oats with cream and raw sugar pales in comparison.  Yes, it was nice.  Nice enough for me to have it again for lunch (there was still some left over because Deane didn't eat it.  I'm not going to waste food unnecessarily, and I had my heart set on a different breakfast the next morning so it had to be eaten).

But by Saturday afternoon I found myself willing the clock to tick faster.  I couldn't wait for Sunday morning.  Sunday morning was going to be my longest run in five months, and a delightfully tropical sounding oatmeal breakfast that I'd been thinking about for days.  I managed to fill a lot of Saturday with spinning for the Tour de Fleece, day one.  I started with my bag of cormo weighing in at 510g.  I split off half of it, so I would know I had exactly half for each of the singles to ply together later, and wound it into a giant fibre-ball.  By the end of the day, between my run, baking a chocolate cake with T (but mostly by myself because he was distracted by other things), cooking an amazing dinner (more on that later) and a bit of tidying up (this house is perpetually messy) I had managed to spin about 72g into singles approximately 28 wpi, which is what I was aiming for.  Turns out spinning fibre is just like riding a bike.  Doesn't matter how long it's been since you last did it, you remember instantly what to do and you just do it.  So my progress on the first day looked like this: 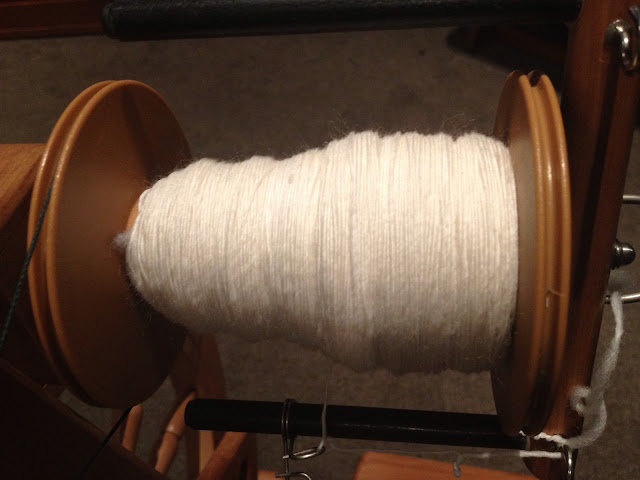 Not too bad I guess.  The cormo is delightfully squooshy and fluffy, and very easy to spin.  Much like merino (although I do recall my first attempts at spinning merino.  Fun times...)  I started straight after breakfast, while Deane was off doing his kettle bell training (yep, you read that right.  No comment.)  Once he got home I headed out for my run, which was about 11km including 40 minutes of fartlek running.  Turns out I'm crap at fartlek running.  I'm sure I'll get better.  Perhaps I was distracted by the beautiful scenery: 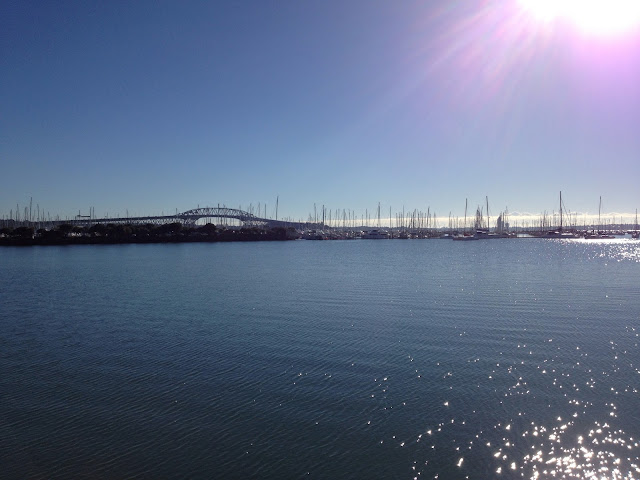 It really was quite a lovely day.  After that was lunch (already mentioned), and about mid-afternoon I got started on dinner - roast chicken with sausage and apricot stuffing.  It was a lot of mucking around - I forgot to soak the apricots so had to boil them for ten minutes, then I had to wash the pot to reuse it for the onion and garlic.  I used too small a frypan for the sausage pieces so had to transfer them to the pot with the onion and garlic and I had to get up and baste the chicken about a million times during cooking, but oh.  It was worth the effort.  I don't know if it tasted that good because I was really hungry, or because I used a free range chicken (from Moreish) and grass-fed beef sausages (Green Meadows Beef, natch), or if the recipe would be just as amazing with any old chicken and sausage, but I don't care.  It was delightful.  I had on my menu board for the week that Sunday would be leftovers for dinner, assuming that there would be plenty left from our size 16 chicken and all the stuffing that the kids wouldn't normally eat.  I was wrong.  Deane ended up making a stock from what was left of the chicken carcass which he turned into a gravy after braising some meatballs in it, that he served with some freshly made pasta.  Thanks again to my mother-in-law for giving us the pasta maker for Christmas two years back.  Deane makes bloody awesome pasta!  (I won't mention the stress levels and bad language that invariably emanate from the kitchen during pasta-making sessions though... ahem).  I was more than happy to go to bed that evening after a slice of chocolate cake for dessert.

Then finally, it was Sunday.  7am I was out the door with my dextrose tablets in hand, off for my 18km run.  Well, it was supposed to be 18km.  I just couldn't help myself from cracking the 20km milestone and ended up extending the run.  You see, I'd missed a short run earlier in the week (a 3.25km run on Wednesday), so I figured adding an extra couple of kilometres wasn't going to hurt.  Makes sense, right?  Oh, it was wonderful.  A brisk, cool morning with overcast skies but no rain (at least while I was out running, the ground was wet).  Gorgeous sunrise, beautiful colours, fabulous views.  My favourite running shoes, my most comfortable running gear (yay for Lululemon!), and the thought of breakfast and a nice hot shower to look forward to when I got home.  It's so peaceful at that time of the morning on a Sunday.  Sometimes life just can't get any better.  I was really happy with my time of 1:46:31, an average page of 5'19".  I should easily manage a sub-two-hour half marathon later this year.  Maybe I should re-evaluate my finishing-time goal...

As soon as I walked in the door, I went straight to the kitchen to start making that breakfast I'd been thinking about and waiting for.  I tell you now, it was totally worth running 20km.  Coconut mango oatmeal.  I made a double batch so Deane could have some too, with 2/3 cup of standard 'old-fashioned' rolled oats, 1 1/3 cup of coconut milk and 2 tablespoons of brown sugar.  I toasted 4 tablespoons of thread coconut on the stove in a dry frypan, and roughly chopped a handful of unsalted cashew nuts.  I had bought a couple of mangoes at the supermarket the other day and sliced one of those up (yay, there's still one left!  More oatmeal, perhaps?).  Once it was all done, my breakfast looked like this: 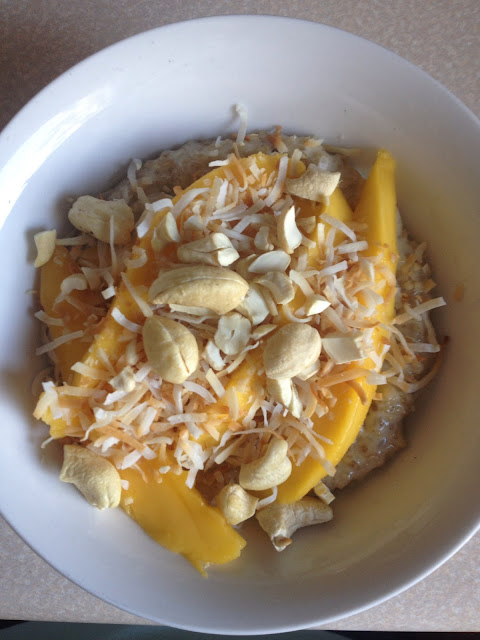 Maybe its just me, and maybe its because I was ravenous, but damn that breakfast looked gooooooood!  It tasted better than good.  It was divine!  And so quick to make!  Although I will definitely have to improve my mango slicing skills ;)  I was a little worried that the coconut milk would upset my tummy, but there were no repercussions at all, and I would more than happily make this again.  YUM!!  A hot shower was next on the list, then my usual Sunday jaunt into town for knitting at Mecca where I finished knitting my hand spun Citron shawl.  I blocked it when I got home, and it's nearly dry now: 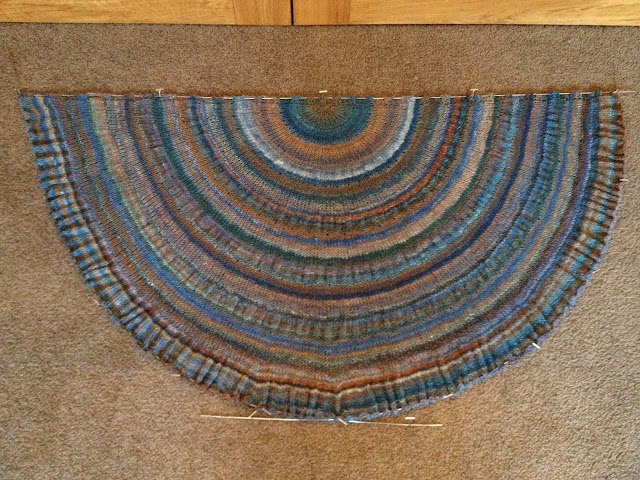 Hooray for blocking wires!  Thanks again dad :)  The shawl is very... stripey.  I'm still undecided about it.  The bind off took over an hour, with about 534 stitches all up.  Phew.  That's the down side of shawls - the ridiculously large stitch count on the outer edges.  Still, I'm happy to have finished it - this shawl has been in my queue for an age.  I'm glad to have crossed it off the list.  After dinner (as described above) Deane and I went to see Man of Steel (a bit of a like/dislike of that one.  Not bad, but some things we didn't particularly enjoy.)  I managed to spin so little on Sunday that when I weighed the fibre, my scales gave me a reading that was one gram more than Saturday's finished weight!  So I guess my progress was pretty meagre: 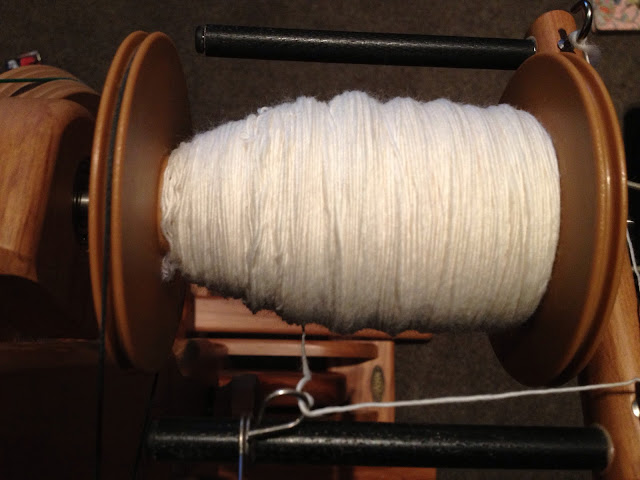 Oh well, some is better than none.  I managed to read a bit without falling asleep before turning the lights out at about midnight, thinking of breakfast the next morning.  I had pinned this recipe some time ago, but never quite got around to making it.  I finally remembered to purchase some coconut essence the other day, and a baguette (although any bread would do).  Deane was a little dubious when he looked at the coconut syrup in the jug, but by the time he'd eaten his breakfast he was asking me to take the jug of syrup away to prevent him from drinking it.  Guess it was pretty good ;)  There's enough syrup left to have on waffles tomorrow morning, so my oatmeal experiments will have to wait a bit.  I'm thinking next up will have to be grape and walnut porridge (this blogger is in the UK and calls it porridge like us :)  Oatmeal, porridge, its all the same.  And she's a runner too!  Definite blog follow!).  Then the pecan pie baked oatmeal for sure :)

I don't think I'll ever understand people that have the same breakfast every morning.  I get that you like something, but to like it enough to have it every day?  When there's so many other options?  Oatmeal - in all its glorious variations; eggs - again, so many options (scrambled, poached, fried, omelette, baked, in a breakfast burrito (OMG breakfast burritos!  So good!!); umpteen-million bread or toast options, not to mention all the things you can have on it or with it...  Y'know, I don't think I'll ever go back to having cereal or toast every morning.  Maybe every now and then because I still like cereal and toast (although to be honest, it usually ends up being an afternoon snack rather than actual breakfast).  For now, I'm really enjoying trying anything and everything.  I may have to become a hobbit and have second breakfast and elevenses.

Right, I have some spinning to get done.  It's the beginning of a new week, and there's fun to be had.  Why do so many people hate Mondays?  They're great, I love them :)  Enjoy your week!!
Posted by kreachr at 11:38