Haven't seen that in a while

Here we are in Napier, enjoying the sunshine during the school holidays.  This morning there is a rather lovely thick coating of frost on the ground.  You don't get frost in Auckland.  Funny, the things you miss...  I was driving home in the wee hours of the morning after having spent an evening with my bestie watching ridiculous movies (Warm Bodies anyone? We had such a laugh) and there was already frost on my windscreen.  Which reminds me, I must put more water in the windscreen wiper reservoir.  You know, the squirty thing...

Anyway, you may recall that last weekend was the first Unitec race for the year, a 5km.  I got to meet my blog-friend Sherry from Run to the Mountains (hello!).  She's more onto it and has already blogged about her experience.  Me?  I'm a little slower-moving this week, what with the school holidays and driving out of town and all.  Visiting with friends and family takes up a lot of time ;)  So, the race.  Well, I got up at 6.30am so I could make a hearty breakfast and leave plenty of time for it to digest and become awesome running fuel - that morning it was banana berry and white chocolate, using some frozen blueberries, since berries are out of season here (sad).

It was delicious, and just what I needed to kick-start the day.  At around 7.45am I headed out the door to the race venue after having decided that it was just too cold to wear shorts, bearing in mind that I would be standing around waiting for the race to start for about an hour.  We had to pick up our race numbers, timing chips and race shirts since it was the first event, and registration closed half an hour before the start of the race.  I'm always paranoid about trying to find a park (parking is not my strong point, just saying), getting lost on the way (directionally challenged), or getting there when everyone else does and having to stand in line for ages (that's just boring).  I unsurprisingly got there with plenty of time to spare, which gave me time to chat with a few other race-goers.  I'm not generally overly social at events, particularly with strangers, but sometimes small-talk is okay.  Especially when you're all having to deal with the same chilly conditions and want to have a bit of a whinge.  Auckland weather had up until that point been unseasonably warm, so I don't really know why it chose that particular day to be stupidly cold.  When I say cold, I mean Auckland-cold.  Not everywhere-else-that's-actually-having-a-proper-winter cold.  It was about 10ºC.  They did a bit of a warm-up, then the local MP did a wee speech allowing all those people that had just warmed up to get cold again, then the countdown began.  10, 9, 8, 7, 6, 5, 4, 3, 2, 1... and we're off!  I found myself a little annoyed that I started so far back in the pack because I ended up lumped in with a bunch of joggers, but fairly quickly managed to escape the pack and get moving.  I'm happy to say that every person I passed during the race stayed behind me.  We ran two laps around the Mt. Albert Unitec campus which was mildly hilly and not overly strenuous (possibly due to all the hill work I've been putting in), allowing me to have a negative split time (second lap faster than the first) despite being plagued with the dreaded shin splints for the whole of the second lap.  Yes, they are still here and didn't come right after a few days rest.  I didn't really think they would, but I was quietly hoping all the same.

I enjoyed the race, but didn't quite run it as fast as I'd have liked (stupid shin splints).  I am still happy with my result though - out of 215 finishers for the 5km/two lap race, I finished 32nd overall, and was the 6th female finisher.  With a net time of 25:48 I was only 2:48 behind the first female finisher.  Woohoo!  Of course, 215 is a relatively small field of competitors, but I always just run for the joy of it, not to beat everyone.  I'm never going to be the leader of the pack, and I'm okay with that.  This week is all about more rest, stretches and exercises, anti-inflammatories and ice to try and shift these shin splints so I can get back to running four to five days a week, and can run the next race pain-free, which is on 4th August.  Fingers crossed!  I'm trying out this exercise to see how it goes - reading the comments it appears to have worked for many runners, so I figured it couldn't hurt to try it.  Seems a bit like one of those cons - 'take this diet pill and watch the pounds melt away' or 'do this one exercise every day for a week and lose 20 pounds'.  'Do this one amazing exercise and your shin splints will disappear'.  Hmmm... I'll let you know how that one pans out.  As for the others, you're on your own ;)  Yoga would undoubtedly help as well, but I haven't really managed to fit any of that in for the last week or so.  Perhaps once I'm back home and into a more normal routine, I'll get back to it.  May have to pull out the daily schedule again, since study has started for the second trimester.  That's next week for me though.  This week is all about spending time with friends and family and enjoying sunny Hawkes Bay.

I'm inflicting my porridge obsession on everyone here too, and making my mum try out the different recipes with me.  This morning was coconut banana baked oatmeal (urgh, blurry pic): 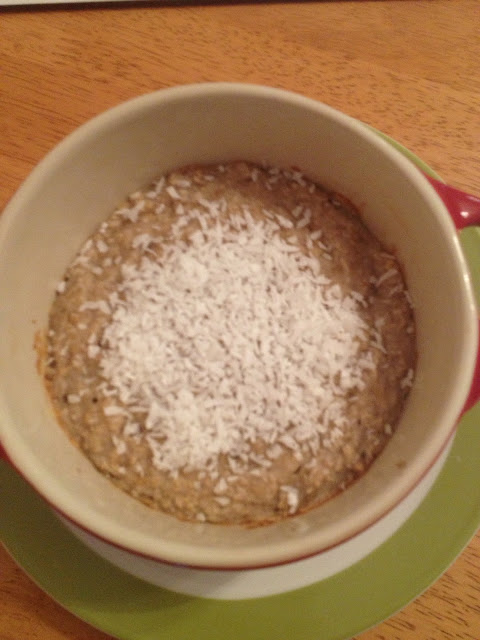 I rather enjoyed it, but sadly, mum did not.  Probably the coconut milk.  Yesterday we had cran-apple oatmeal.  I liked that one too, although it was a little more bland than some of the others I've had.  It tasted pretty good with some apple syrup drizzled over the top though.

The serving looks rather pitiful, but that's just because it is in a giant bowl.  Seriously huge bowls here, don't know why...  Last week, before heading to Napier, I also tried blueberry cashew oatmeal (much smaller bowl, comparatively): 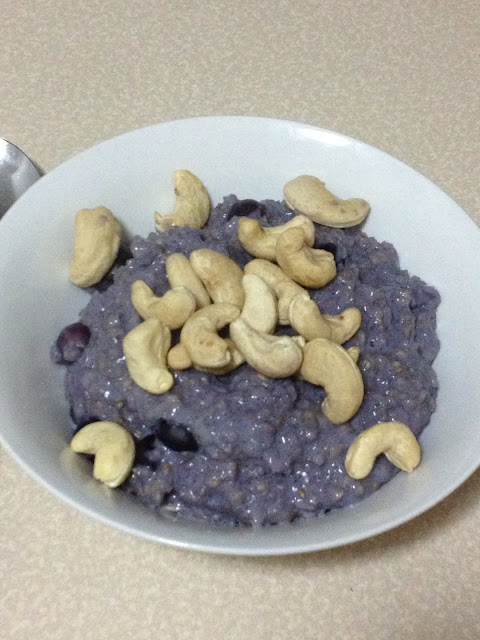 It was delicious, and I was rather delighted with the colour :)  I'm not sure if you'd get that with fresh blueberries.  Perhaps to a lesser extent.  There was also apple cinnamon porridge, with a delightfully creamy blob of creme fraiche on top (YUM!!): 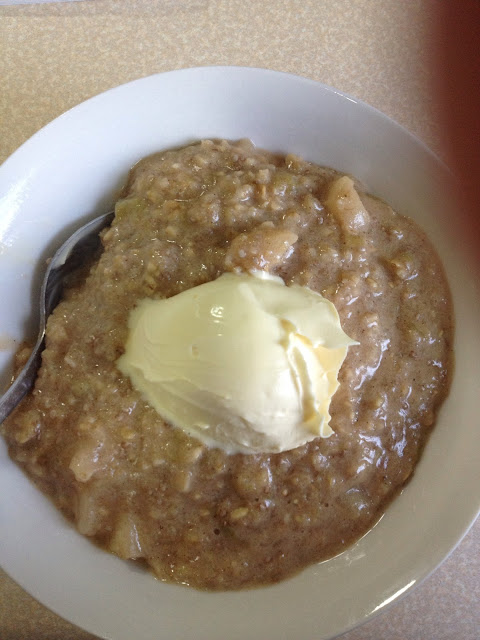 I got to meet this ridiculously delicious carrot cake oatmeal, and with some raisins and walnuts added, I think this would have to be one of my favourites so far.  I rather enjoyed the 'frosting' as well: 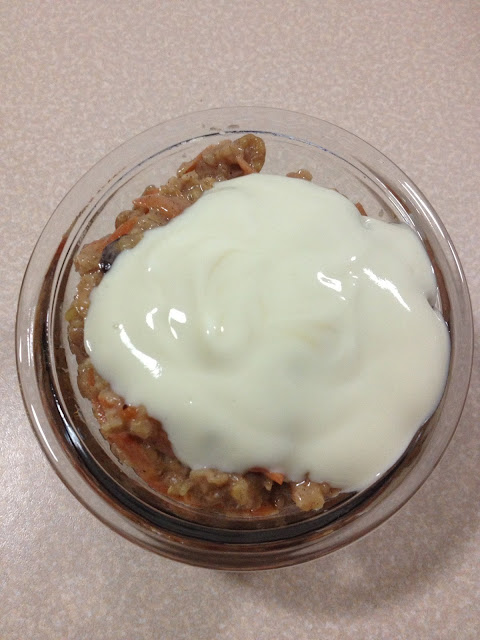 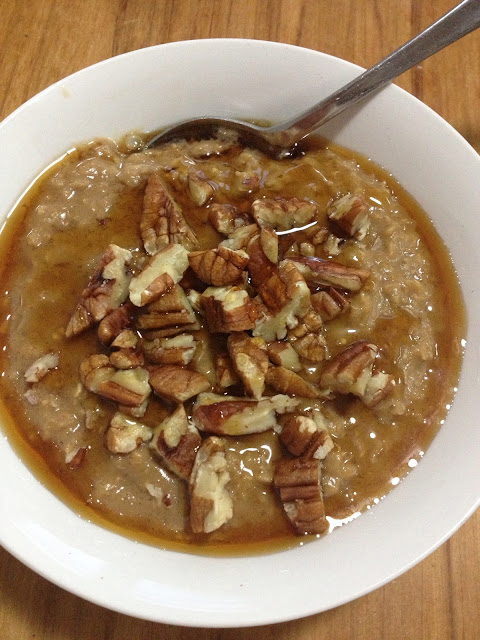 And on the Monday morning before the boys and I headed to Napier, Deane and I shared some pina colada oatmeal: 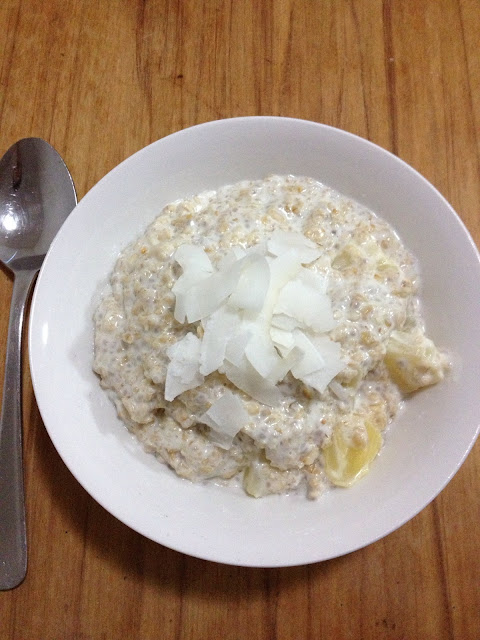 I added some white chia seeds to this one.  Lovely.  Gosh, that's quite a lot of porridge!  I'm showing no signs of stopping yet though, there are just so many good combinations to try!!  I'm having so much fun :D 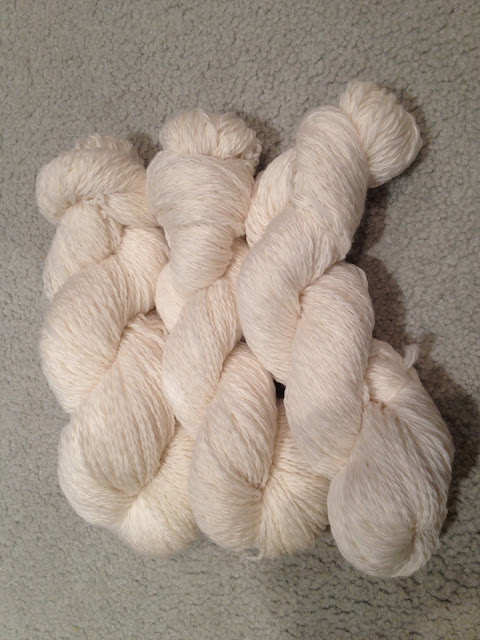 I don't have my digital scales so I can't weigh the skeins until I get home.  But let me just tell you, they are ridiculously squishy.  I am madly in love with them and I can't wait to spin the rest of the fibre so I can have EVEN MORE of the squishy yarn - enough to make a super squishy warm cardigan.  Yes, I think that most definitely has to happen.

As always when I'm updating y'all on the happenings in the land of kreachr, time has gotten away from me again.  I must get dressed (yes I'm still in my cosy slippers and pyjama pants at 10am.  I'm on holiday so shush) so I can go join my boys and their nana.  We're heading out for lunch and a game of mini golf.  Fun times :)  Have a fabulous rest-of-the-week, and stay warm and dry wherever you are.  I'll be back here next week.  See you then!
Posted by kreachr at 10:16