Yep, it's been an exciting few days in the kreachr household ;)  Spinning has been ticking along in fits and starts - a few days I've got quite a bit done, and other days I've spun hardly anything.  It's all a bit of a balance, trying to fit a little of everything into my days.  I have managed to completely fill one bobbin with singles, at approximately 28 wpi.  It varies, but hand spinning isn't supposed to be perfect, right?: 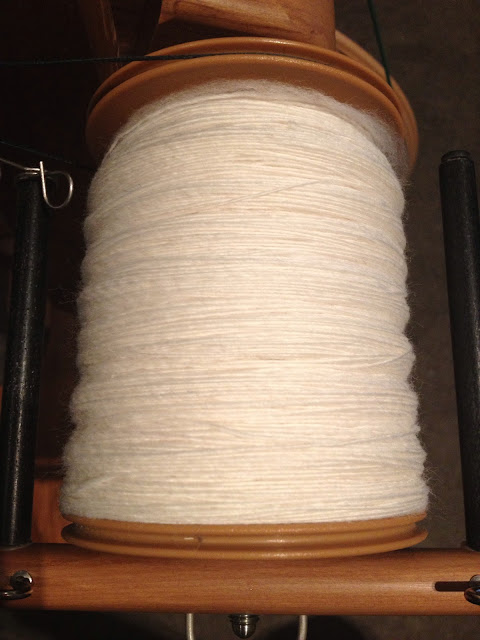 That's about 147g, give or take a few.  There's still 110g left in that half of the fibre yet to be spun.  I started a new bobbin with the other half of the split fibre and managed this much yesterday: 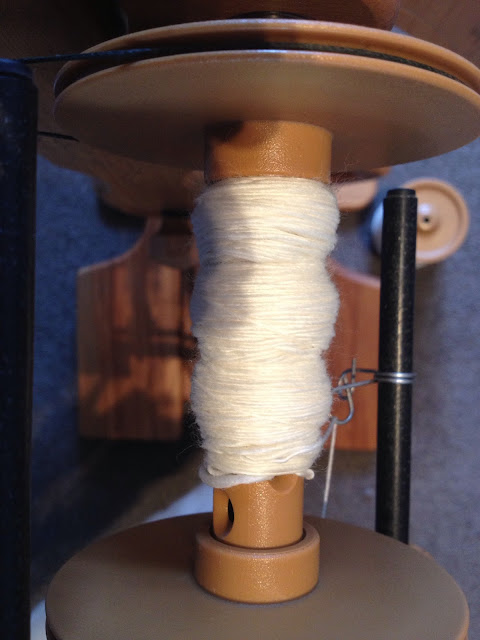 About 7g.  Bit sad really...  I got a little sidetracked in the kitchen, making tomato and thyme soup and coconut milk bread for dinner.  I have also been trying out a bunch of oatmeal recipes from my two new favourite blogs.  First up was the pecan pie baked oatmeal.  And before you ask, yes, I have decided that I can eat oatmeal twice a day - stovetop porridge for breakfast and baked oatmeal for dessert.  Who's going to challenge me?  Hmmmm???  Also, I can't settle on one term for it - oatmeal vs porridge.  Then when it's uncooked I call it rolled oats.  Jeez, pick a name already!  I digress... 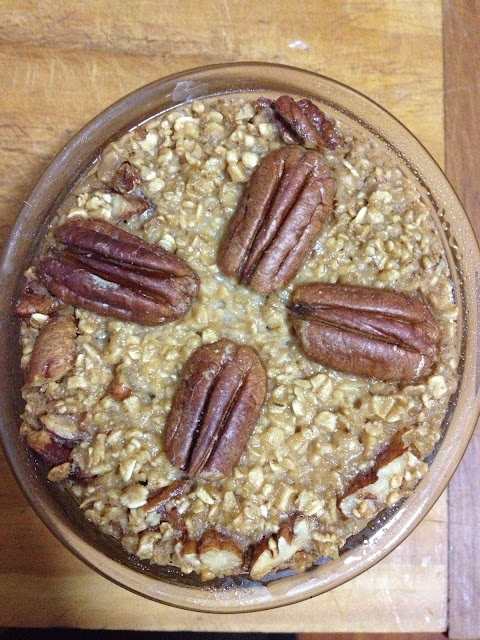 I started making it Tuesday night for dessert while Deane was still at work.  Unfortunately he arrived home while it was in the oven, and he finished his dinner around the time I took it out and put it on the bench to cool slightly.  He took his dishes into the kitchen (which is quite unusual for him, he usually leaves them wherever), spied the baked oatmeal on the bench, and claimed half for himself.  Thief!  I don't blame him though, it was pretty good.  I guess that was my fault for naïvely thinking I could get away with making only one.

The next morning we had grape and walnut porridge: 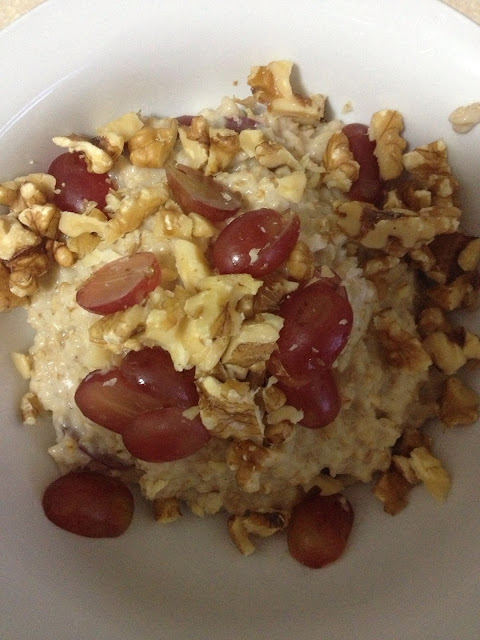 It was nice, but probably could've done with a little more sweetness.  I think I only put in a little brown sugar.  It was still good though, and not a combination I'd have thought of myself.  Ah, who am I kidding?  I have no imagination when it comes to this sort of thing.  That's why I rely on other peoples' creativity :)  Now when it comes to freaking myself out and thinking of all the worst possible things that could happen, for example watching my kids running or scootering down a hill and picturing them falling face-first onto the concrete?  Yeah, that.  I positively excel at that.

Last night, I couldn't decide what I wanted for dessert so I ended up making two to share - vanilla pear baked oatmeal and chocolate chip cookie baked oatmeal. 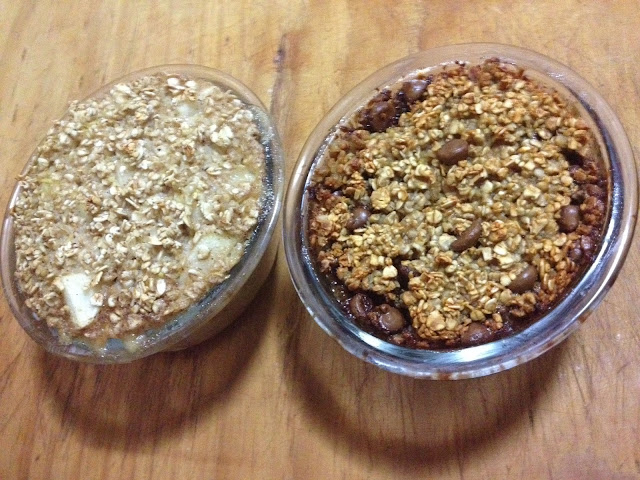 My photography skills are pretty crap, especially when I have shitty lighting.  If you want pretty pictures of the oatmeal, I suggest you check out the original blog posts.  They make them look much nicer :)  The vanilla pear was okay, but if I was to make it again I would omit the lemon zest and add more sweetener.  The two teaspoons of honey just didn't quite cut it.  The chocolate chip cookie oatmeal was awesome.  I kinda just kept eating it until Deane noticed and snatched it out of my hands before I could devour the lot :(

This morning's breakfast was kiwifruit and coconut porridge: 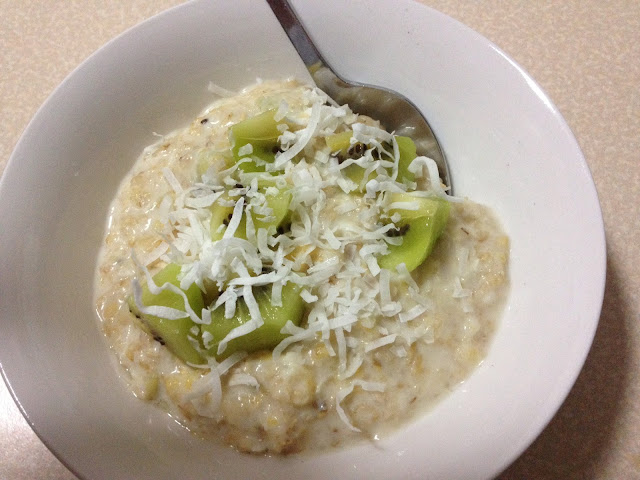 To this I added a mashed red banana rather than sugar or honey.  It came out pretty good.  I think that might do for oatmeal/porridge for now.  Perhaps I'll have eggs for breakfast tomorrow.  No doubt I'll be back to porridge sometime over the weekend though - it's excellent fuel for long runs!  Speaking of which, I'm having fun trying out new routes at the moment.  Tuesday's run took me up Hepburn Street (a nasty way of starting a run, either way you look at it.  That hill is steep!  Looking at the stats, between the corner of Hepburn and Wellington Streets to the point where Ponsonby Road meets K Road/Great North Road, there's a climb of 76 metres, in 0.8km), along Ponsonby to Great North Road, to Bond Street, to Sandringham Road, then along Balmoral Road and back down Dominion Road, Ian McKinnon Drive and Upper Queen Street, eventually arriving back at K Road and Ponsonby Road, where I turned back down Hepburn Street (not so fun to run down either, bad for your knees).  I did a few 150m strides at the bottom of Western Park before heading home.  All up, a 12km run.  Today, I'm heading out around the outside of Parnell - along Tamaki Drive, turning onto Ngapipi Road and Orakei Road, then heading around the outside of the Auckland Domain and through Grafton, just over 15km.  There's going to be some meaty hills towards the end of the run, but I think pretty much anywhere you go in Auckland will have hills.  My house sits in a valley so no matter which direction I turn, my run always starts with a hill climb.  Unless I'm lazy and walk it ;)

Open Polytechnic has kindly notified me (and all other students) that final results for the first trimester will be released on the 25th July, which means I have to wait until over week after the second trimester starts.  I hate having to start new study when the previous study isn't 'finished'.  Sigh.  I ordered my big heavy hardcover Statistics text book on Wednesday, and it arrived via courier on Thursday (good service!  Way to go Vic Books!).  Leafing through the pages does not instill me with confidence.  Sure, I have improved greatly my ability to look at an algebra equation without melting into a puddle of despair, but that book looks super scary!  I have vowed not to open it again until the course instructions say so.  Less than two weeks of 'holiday' left.  Which is terrible timing when you think about it.  My trimester starts when the kids' school holidays start.  Ugh.  I think I'll just have to start a week late.  That weekend is also the first Unitec race.  I'm doing the two-lap series, so for me it'll be a 5km run.  Short and sweet :)  I have absolutely no intentions of trying to beat anyone, just run a good time and have fun doing it.  Although I am trying to decide whether I want to go for another run afterwards, since according to my training program I'm supposed to run closer to 20km...  I'll see how I feel on the day I guess.

Gosh, the day is getting away from me.  Time to get moving, things to do.  Namely, housework.  The house is starting to look a little the worse for wear.  Oops...
Posted by kreachr at 10:36