My imagination can't really stretch to coming up with a(n attempt at a) witty title this morning.  Do all posts really need titles?  Or tags or labels?  It has occurred to me recently that I have never tagged my blog posts.  Not in the whole... oh my gosh, four years I've been blogging?!?  It's really been that long?  Wow!  So anyway, if I was to start tagging my posts now, my little OCD inner-voice would demand that I go through all the previous posts, read them through, and tag them all as well with the appropriate labels (although perhaps you're wondering why this same OCD inner-voice didn't demand we tag posts in the first place.  I'll get to that).  This would certainly help when trying to look for something specific, but one wonders who actually looks back through old blog posts?  I understand tagging posts for a blog such as The Oatmeal Artist, where people would be looking for specific recipes fairly frequently, or perhaps recipes containing certain ingredients.  But a random journal-type blog by a nobody?  Not so much...  It started originally with my lack of blog-knowledge and not knowing that I could/should tag posts, or how to go about it.  Then it became the whole 'well I haven't done it before, it would be silly to start now' kind of thing.  Now it's more like 'hmm, maybe I should...'.  I know it would make things easier for me when I'm looking for something.  Which, to be honest, is once in a blue moon.  But still, it happens.  Maybe one day, when I have nothing better to do...

So the whole 'getting up at 5.30am' thing didn't really pan out.  I got up at 5.45am last Monday, did my yoga, and got on with the rest of my day.  It was great.  Tuesday was a little closer to 6am, and I studied in the hour before everyone got up, then went to Cornwall Park later in the morning for my run, since it's still too dark to run early mornings here.  By Wednesday, I'd kind of given up, and ended up getting up at 7am the rest of the week except for Sunday when I got up at 6.30am to get ready for my race.  I did consider re-starting this week, but I was tired and got up at 7am instead.  Oops.  Perhaps tomorrow...

Ugh, I'm rambling.  Let's get some structure to this post, shall we?

Running
Not too bad.  I rested on Friday and Saturday in preparation for the 10km race on Sunday.  As mentioned before, I got up at 6.30am to make breakfast then fluffed around until 8.20am when it was time to go.  I had my timer tag firmly laced in to my shoe and my race number at the ready.  In order to avoid getting lost (mostly on the big roundabout at the off-ramp to Ellerslie/Greenlane East, it can be very confusing to a slow brain such as mine, despite the very big, very obvious signs) I used my phone GPS to direct me to Ellerslie race course and event centre.  After driving straight past the entry onto the field for the race and winding my way through a few venue car parks, I spotted where I was supposed to be going (because of all the other cars) and headed in that direction, giggling to myself because the large number of road cones directing people where to go were blatantly obvious yet I missed them completely.  Typical.

I meandered around for a while, then took a seat in the grandstand and watched people warming up before the half marathoners started - their race began in a different location, 15 minutes before the rest of us.  After they'd run past, I wandered down to make a pit stop before the start of my race.  Unfortunately, many others had the same idea and there was a bit of a queue.  By the time I'd finished, they were counting down from 20 seconds for the start of the race!  I had just enough time to run over and sneak into the side of the pack between a couple of temporary fences.  And we were off!  I have to say, the terrain for this race was not quite what I had expected.  It started off on grass, then went to gravel, through a concrete tunnel (quite an interesting experience!), then more gravel and around the inside track of the horse racing track, back through the tunnel, onto more trail, then out onto the street!  We ran around the block, then came back into the stadium and onto grass again, around for another lap.  I was passed by three people, two of which were half-marathoners.  The other was a guy who was running his first ever 10km, in preparation for his first ever half marathon in the Auckland marathon, of which the Unitec series is the official lead-up series.  After having a wee chat and me telling him there was less than 1km to go, he decided he wanted to finish strong and took off towards the finish line.  I maintained my even pace and finished in 54:53, in 39th place overall (out of 208), and 8th female (out of 128).  Not too bad, considering my lack of form in the last few weeks.  I had managed a negative split again, although just barely - my second lap was 11 seconds faster than my first.  My legs weren't too bad, although I can feel the shin splints in my right leg are still hanging around.  I iced them last night, but that was more of a token effort.  I'll have to continue stretching and icing in the next week or two to avoid a relapse.  They have improved though, so I'm happy with that.  I plan on keeping my weekday runs short (under 10km) and doing one longer run on the weekend.  The next race in the series is a 12km on the 25th August in Devonport.  Looks like it'll be a street run.

Food, Glorious Food
More oatmeals!!  For something a little different, I had Elvis's Oatmeal.  I'm sure you're familiar with Elvis Presley's notoriously famous favourite sandwich - bacon, banana and peanut butter.  Well, here it is in oatmeal form, with a little honey drizzled over the top: 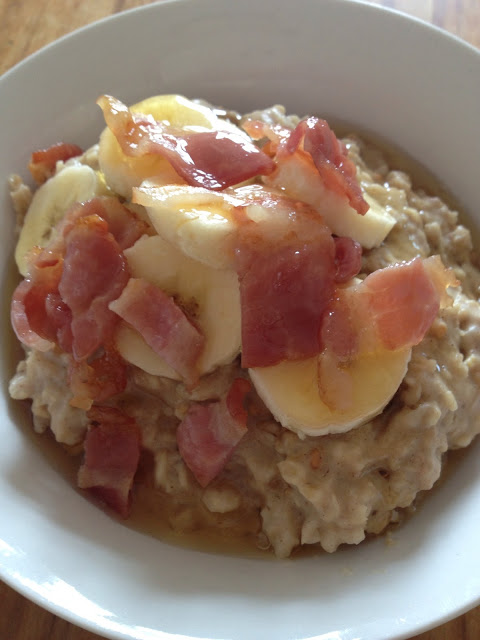 You see, I'd made bacon, banana and maple syrup pancakes for breakfast: 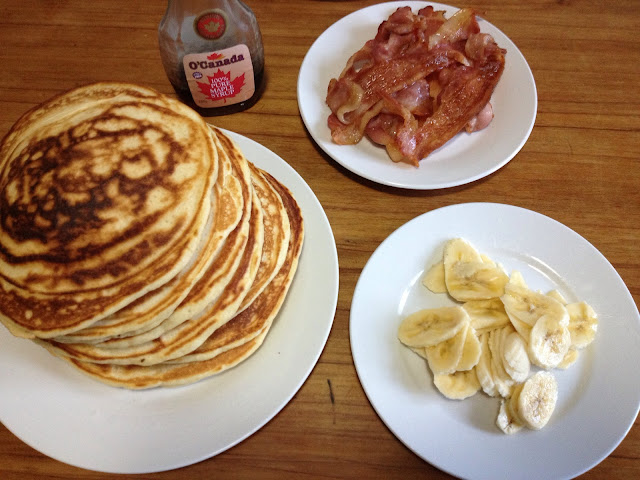 There was leftover cooked bacon.  What else could I do? ;) 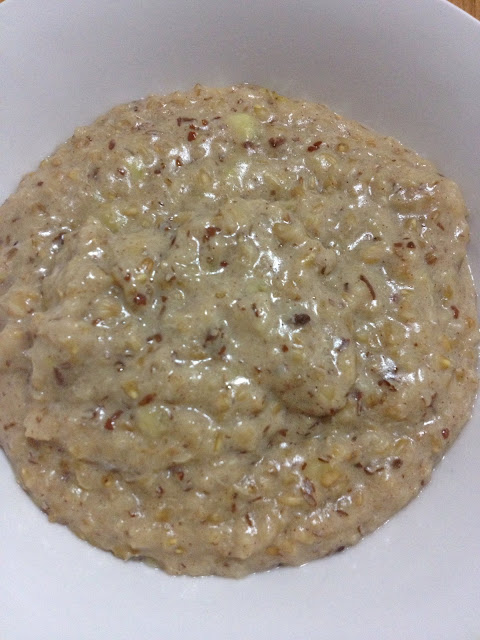 Looking decidedly boring, as I didn't add any toppings to this batch.  Although I think I threw in some ground flaxseed...

Applesauce oatmeal with pecans, maple syrup, and a sprinkling of cinnamon: 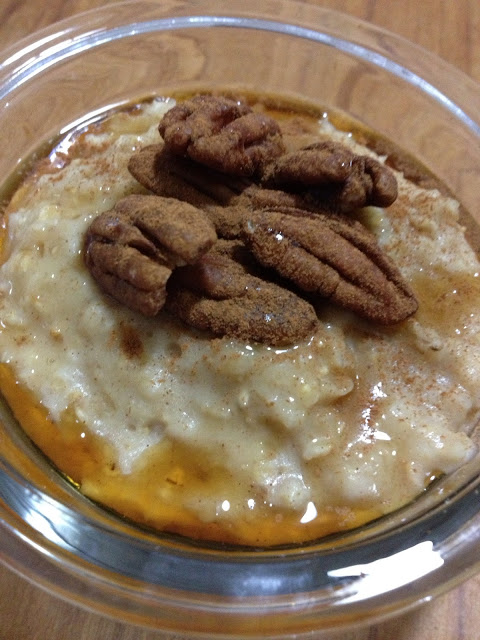 And pineapple cashew oatmeal, which was my pre-race breakfast on Sunday: 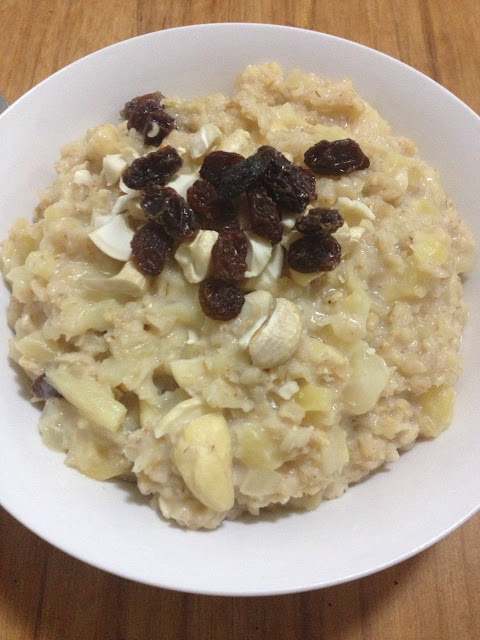 With raisins for added yum :)

I think I'm finally starting to slow down a bit with the oatmeals. Perhaps my subconscious has noticed the slight change in weather patterns and is starting to steer towards more season-neutral breakfast foods.  Although I did make up some ready-oatmeal packets for Deane to take to work, for those mornings that he's running really late: 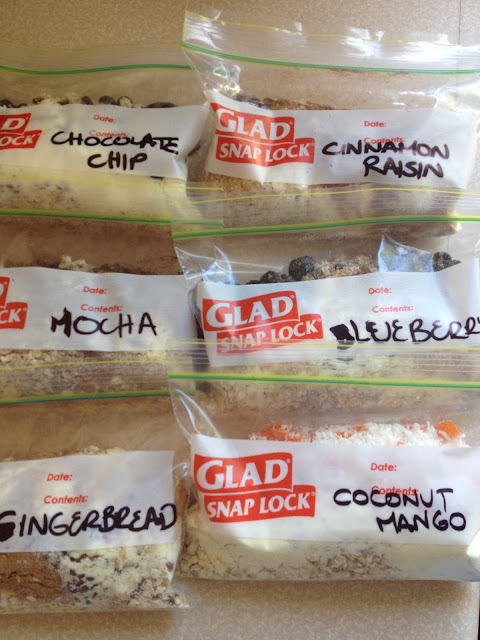 You know, those mornings he's so short on time he doesn't even have a spare second to grab a bagel or a wrap out of the freezer ;)  I used the ingredient ratios on this website, and added dried fruits and spices that he was likely to eat.  Considering he keeps saying he likes 'plain' oatmeal, I'm wondering if he'll ever eat these ones...?

This week's menu only has one oatmeal planned (Almond Joy oatmeal): 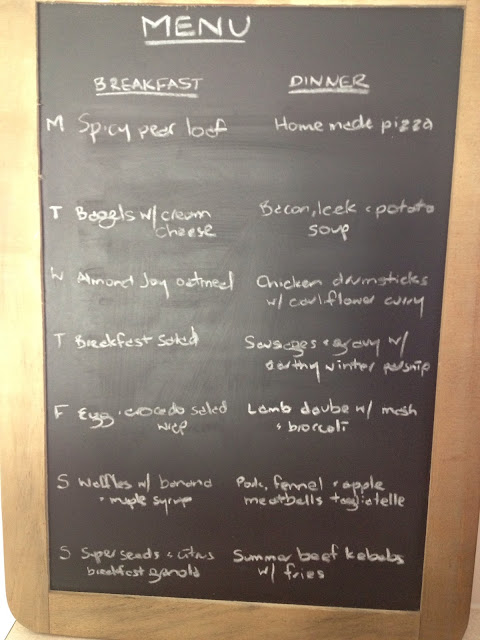 My writing is starting to look a little messy.  I blame the blunted chalk sticks ;)  You may notice that on Thursday I have listed 'breakfast salad'.  'What is this breakfast salad?', you may be asking.  The notion popped in to my head the other day, and being the wise person that I am, I knew I wouldn't have been the first person to think of it so I googled 'breakfast salad' and came up with a whole bunch of stuff.  There's the usual fruit salads and other salads that you'd have for lunch or dinner, but there were a few that caught my eye that I'd really like to try out - breakfast salad with cinnamon toast croutons and maple vinaigrette, and a couple here, with yummy things such as blueberries, nectarine, and goat cheese.  Oh, I can't wait for summer foods to be available again!  Summer is by far not my favourite month, but being able to eat summer berries, stone fruits and salads, barbecues, and enjoying more daylight hours and early runs... there's definitely some things to love.

The freezer breakfast stash didn't take too much of a hit during the week.  We went through the loaf of white bread and the waffles, and some of the bagels.  So this weekend I made another batch of waffles with whole wheat flour and apple sauce to cut down on the white flour and butter/oil.  X has already proclaimed he doesn't like them because of the flour, but will happily eat a whole wheat bagel with cream cheese.  Go figure.  I also made these beauties: 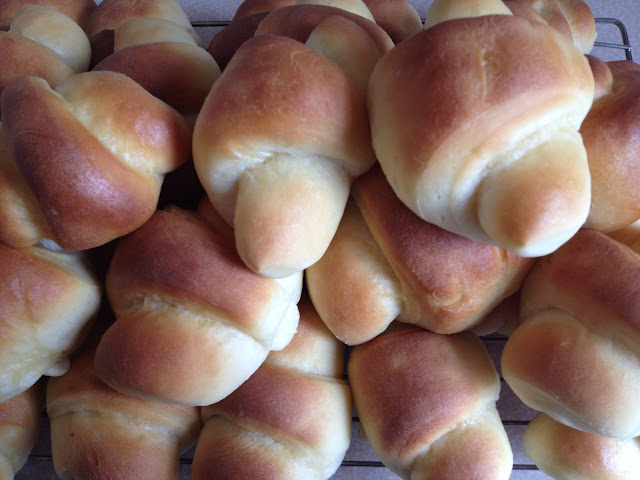 The recipe calls them the 'best rolls ever', and I'm inclined to agree.  I don't have a cake mixer (yet) so I made these by hand.  Easy enough.  They came out pillowy soft and fluffy, and with the melted butter brushed over them while they're still hot, the flavour is similar to a croissant.  Absolutely beautiful!  The batch makes 32, so there's a bag full of them in the freezer for the kids' lunches.  I also made some swirl sugar cookies because, y'know, a kid's lunch box isn't complete without something sweet and unhealthy in it (amiright?): 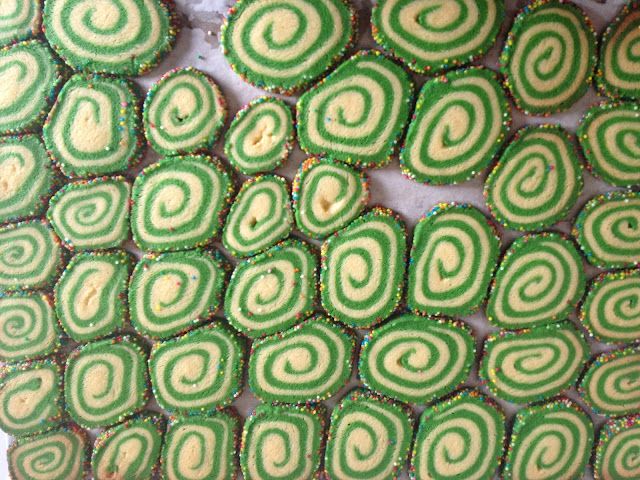 It's just a basic cookie recipe split in half with green food colouring added to one half, then each half is rolled out flat and layered, then rolled up, covered in sprinkles, sliced (after spending some time in the fridge) and baked.  I got impatient and didn't want to wait around doing two or three batches so I squashed all the cookies onto one tray.  They kinda spread out and smooshed together but the kids don't mind.  They still taste the same :)

So that is me for now, and it is best I get off this here blog and get stuck into my assignment.  Have a fabulous week!!  See you later :)
Posted by kreachr at 10:51