My running has been improving of late.  Sort of.  My shin splints haven't returned, or rather I don't feel the effects while I'm running.  I still get the annoying burning sensation in my right shin when I'm resting.  If it gets too much though, I only have to get up and walk around the house or go and do something, and it goes away.  I'll just add this little niggle to the many accumulating niggles I've developed since starting to run more than just a slow 5km three times a week.  I guess it's not surprising really, but during my first year or so of running, my distance never went over that 5km mark, and I never had any problems.  At all.  I even remember clicking on a wee survey on the Runner's World website - it asked about your injury history and I clicked 'never had a running injury'.  I was very pleased with myself.  Shortly after that, I started to increase my distances because I wanted to do the Auckland quarter marathon.  I can look back at my running history on Nike and see the gaps.  There was a three month break in mid-2012 for other reasons, but every drop in mileage is due to an injury and I know what each one was.  The first one is fairly apparent - I developed runner's knee because I went from no running for three months to running 102km in August 2012.  I didn't build up gradually enough.  The next was the snowboarding injury in February this year.  Very soon after that, I tripped and damaged my kneecap.  After finally getting back on track again, I got shin splints.  Blah.  At the moment I'm walking a very fine line between training enough for the North Shore half marathon in three weeks, and not causing another injury by upping the mileage too quickly.  I was a little naughty this last week running just under 31km, when I'd only run 18km the week before.  That's way over the recommended 10% increase.  Oops.

Tuesday was another run around Cornwall Park.  I got waylaid by an electric fence, as I often do while running the sheep track there.  They're calving and lambing at the moment, so keeping away from mama and baby groups is highly recommended.  Normally it's just a loop, but with the handy GPS tracking you can see where I had to run along a temporary electric fence line and find a place to jump the (not electric) fence in order to get around and back onto the track: 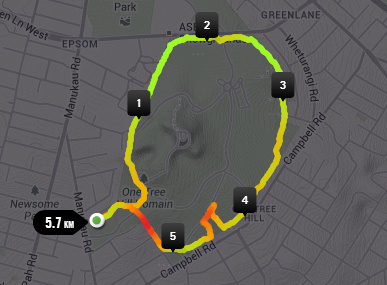 I scared a lady too.  She'd heard me tramping through the long grass, but got a fright when I suddenly appeared over the other side of the fence next to her!

On Thursday I ran one of my old routes through Grey Lynn: 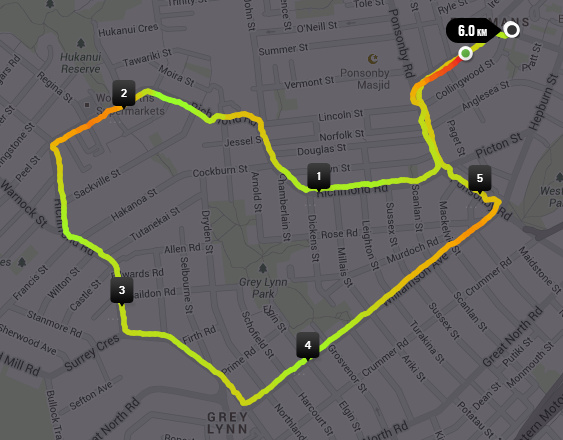 And now for the social/anti-social part.  I decided to go to the Parkrun event in Cornwall Park, since I had rather enjoyed the Barry Curtis Parkrun two weeks before (aside from the nausea of course).  It was a little drizzly, but that didn't deter the 80 other runners that had turned out to participate.  I got there just before the start of the run, and I'm not sure if it was the larger group size or lack of sufficient time to ease into it, but I didn't feel like talking to anyone beforehand.  I just lined up with the rest of them and set off on the run.  My 'official' time was 26:10, which was ten seconds faster than the Barry Curtis run, and I quite enjoyed it.  I was 'fourth lady' again, and 40th overall, smack-bang in the middle of the pack.  It was more trail-like, and through the middle of Cornwall Park whereas I usually run around the outside: 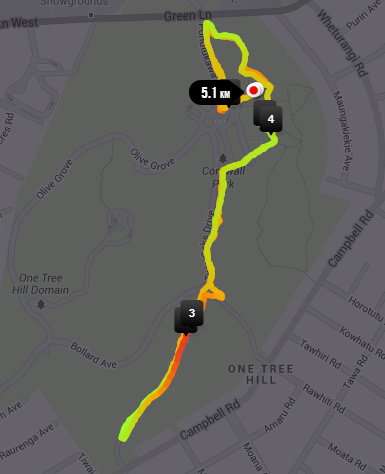 I was glad to have people in front of me to follow too.  Although it was an 'out and back' run, there seemed to be a bit of winding around, not that you can really tell from the picture.  After the run, they all usually go to Sierra Cafe on Great South Road for a cuppa.  I had taken $10 with me, fully intending to join them.  But I didn't.  I hung about for a few minutes after the run looking around at the various other runners and wondering how to strike up a conversation.  Then I just walked back to my car and drove home for breakfast.  Maybe next time I'll talk to somebody...  That evening we had a friend over for dinner, and I had a few glasses of wine.  That may have been a mistake.  Bright and early Sunday morning I got up and had breakfast, then sat and read for a couple of hours while waiting for that to settle and start digesting.  Then I laced up and headed out the door for a long run.  It started out okay, but fairly early on I knew it was going to be tough, and seriously considered pulling back the distance.  I started thinking about all the motivational quotes and stuff that I'd been pinning onto my 'Inspiration and Motivation' board on Pinterest.  Suck it up, princess.  Keep going.  You don't have to go fast, you just have to go.  Don't give up.  When you feel like quitting, think about why you started.  I stuck it out, and ran the 14km I had originally planned on.  I walked a couple of times, and stopped three times for a few sips of water at the drinking fountains along the way.  I tried to think of them as little hits of 'go juice' and pretended they were giving me the energy to keep moving.  It kinda worked for a few seconds, then I remembered how tired I was.  Damn, that was a hard run:

Note to self: do not drink the night before a long run!  I felt completely wiped out for the rest of the day, but I still managed to make some ridiculously yummy glazed cinnamon scones for lunch ;)  Today is most definitely a rest day!  I think I'll do some relaxing yoga.  And make some English muffins.

I've been having some more (or should I say s'more) fun in the kitchen in the past week.  I made some graham crackers (yum!), some chocolate spread, and some marshmallows, put 'em all together, and had s'mores.  Yay!! 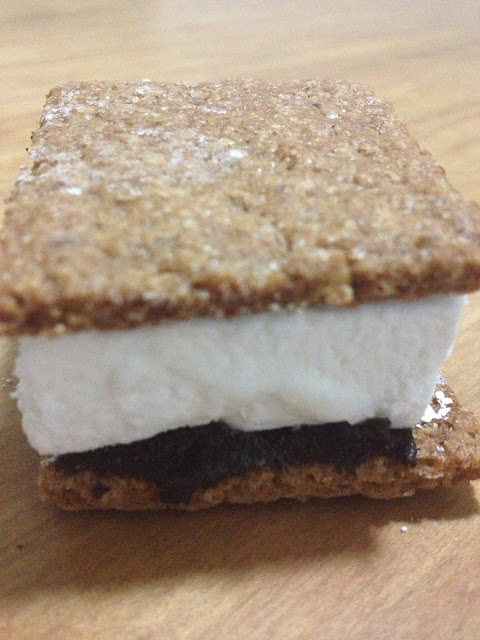 Next time, I think I'll roll the graham crackers out a little thicker, and cook them a little bit less.  They're really delicious, but just a bit on the too-crunchy side.  The kids liked them too, but that may have been because of the chocolate and marshmallow...

I tried (and loved) cashew cookie larabars, avocado egg salad wraps using my favourite flat bread recipe (had to get up at 6am to make these for breakfast!  Totally worth it!), and found a new favourite 'summer' granola:

Ooh, look at the delicious chewy goodness!  I made it with pumpkin, sunflower, chia and linseeds, walnuts and pecans, coconut chips, and dried mango, peach, and blueberries.  YUM!!!  Now I have a summer and winter go-to granola :)

Other experiments have been Almond Joy oatmeal: 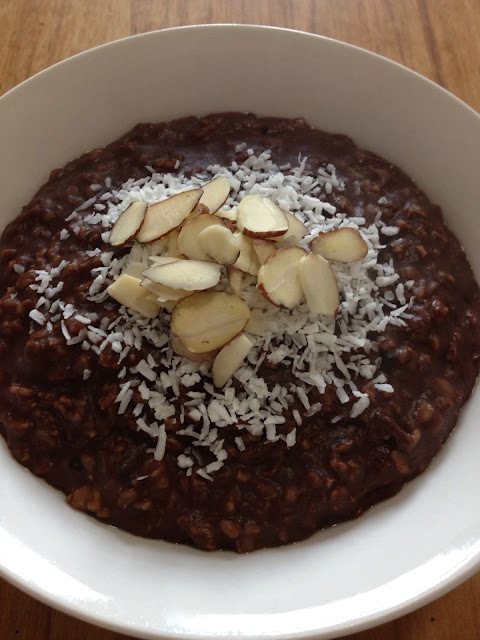 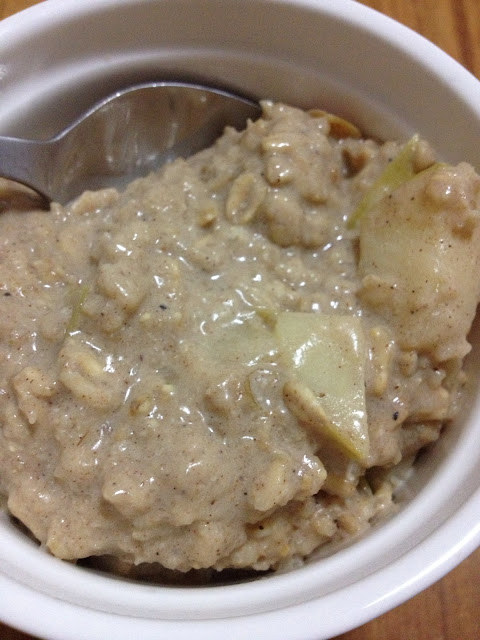 Breakfast salad with grapefruit, cranberries and walnuts and a balsamic honey dressing: 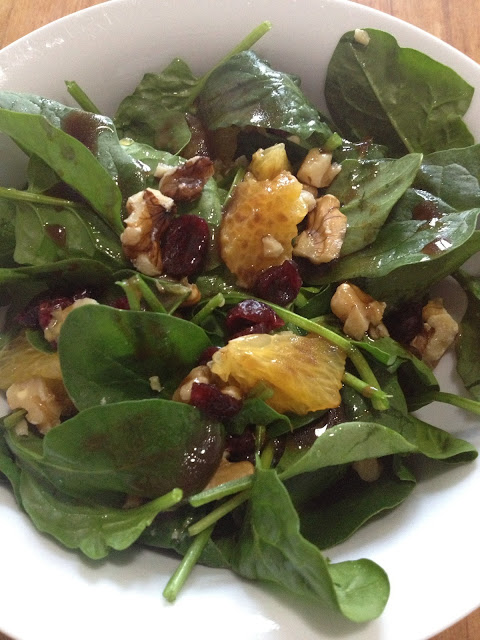 And I successfully made soy yogurt using a litre of soy milk and a few tablespoons of EasiYo skimmers yogurt mix.  I tried the same with coconut milk, but it didn't work.  Oh well, can't win them all.  The soy yogurt was lovely, so I'll probably make it again.  And it's Deane-safe, because he doesn't like it :)

I'm looking forward to trying pasta with cauliflower sauce this week (btw our new favourite 'pasta' is this stuff.  Amazeballs), and we're getting hazelnuts in our Foodbox delivery so I'm going to try chocolate hazelnut oatmeal, although I'll omit the hazelnut extract because I'm not really a fan of hazelnuts.  I might even splash out and get some goat's cheese to have this breakfast salad too.  Although blueberries aren't available yet, so I'll have to defrost some frozen ones.  Not quite as yummy, unfortunately.

Gosh, this morning has flown by!  Time to get stuck in to study.  Yay, statistics!  Not ;)