I ran in the third Unitec race over the weekend, and couldn't be happier with my result!  The day was miserable, and it rained for some of the race.  There was a lovely stretch through some bush on a gravel track, which unfortunately had turned to mud and puddles.  It would've been fantastic if it was dry and sunny, but we'd had a rather brief but very loud thunderstorm around 4.30am and it had been pouring with rain, so everything was decidedly soggy.  That didn't slow me down though!  It was my quickest race time yet, with an average pace of 4'59".  Although I think their measurements may be a little out since according to my GPS tracking I only ran 11.6km, not the 12km the race was supposed to be.  Whatevs.  I came in 30th overall, 5th female, with a net time of 59:54.  Just scraped in under that one hour mark!  I had a good chat to a couple of the guys in the race while we were running - they heard my phone app telling me the distance, time, and average pace that I was running which they thought was pretty nifty.  One guy wanted confirmation of the average pace, and we had a moan about the mud and puddles.  We ran alongside each other for quite a while, then he kinda dropped off on one of the hills.  On the second lap, a younger guy commented on the app and moaned that he only had a watch.  We got talking and stayed together for much of the second lap until he stopped at a water station to grab a drink.  He stayed behind me for a while, then overtook me on the last big hill before the finish.  It seems that quite a lot of people run the last kilometre or so of a race at a faster pace, or do the whole 'sprint finish'.  Me?  I keep moseying along at the same speed regardless of where I am in the race.  It works for me, and I don't see the point in trying to beat one or two people in the last stretch.  I'm not in it to win it, I'm there to have fun and do my best.  Everybody has their own way of doing things I guess.  That's okay :)

I compared the first and second race paces with this third race, and they look a little like this:

I can't wait to see what happens in the fourth and fifth races!  It'll be fun to compare again :)

After the race, I grabbed my complimentary banana and Abe's multi grain bagels (I got handed two this time, yay!  These are so good!  I look forward to them after every race now), then popped in to see the Unitec osteopathy students who were giving free ten minute treatments.  The girl I got this time was really good (as opposed to the one I got last time who was obviously quite new), and after I hopped off the table my legs were feeling much better.  Then I drove home for a much-needed hot shower and some blob out time.

Later that evening I made some home made oreo cookies for the kids school lunches.  Deane was putting T to bed while they were baking, and he came down and told me that T had said they smelled like cuddles.  Bless.  My only question is: does that mean that cuddles in a general sense are warm and sweet and lovely, or is it that I always smell like baked goods?  Either way I was feeling all melty and gooey after that, and couldn't wait to send them off to school with 'cuddles for lunch': 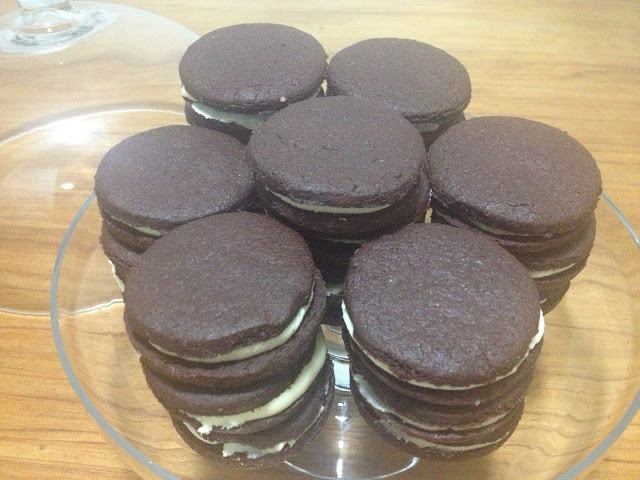 I can't say how much these taste like real Oreos since I don't have any to compare, but they do taste very good and I am in danger of eating them all.  Such is the problem with glass cake plates: the yummy food is always within sight when you're in the kitchen.  I am my own worst enemy ;)  Especially since the next thing on the list are these bad boys.  Somebody needs to ban me from Pinterest...

I did try out something slightly healthier though - baked beans!  Unfortunately I added a little too much chili powder.  Now T won't eat it which is a shame because he loves baked beans.  I think I'll make them again some time soon and just leave out the chili powder entirely.  I was a little naughty and added some butter and cream (totally my dad's fault, he always adds butter and milk to baked beans), and that made it even yummier.  And slightly less healthy.  Oh well...  I'll be eating the leftovers for lunch with a green salad.  That's gotta balance it out a bit, right? ;)

Tonight we're having slow-cooked lamb shanks.  Mmmmm, can't wait!!!  Trying to eke out the available cold-weather crock pot cooking time before the warmer temperatures really dig their heels in.  Since that's already sitting happily on the bench getting all yummified, today is about finishing my stats assignment (tick), mopping the floor, doing the laundry and settling in for some knitting, which hasn't been touched for two weeks while I gave my hand some time to rest.  I think all that spinning I did for the TdF caused a little RSI.  It's all gone now though, so knitting is happening once again, hurray!  I've got some socks and a shawl waiting to be finished.